This bicycle highway from Delft to Rotterdam meaningfully connects different segments into a direct, coherent, low stress bicycle route. There are stand-along paths, cycle tracks alongside a road (mainly Rotterdamseweg and Delftweg), bike lanes, and mixed traffic segments.  It is a strong fast connection between the two cities, as well as the small towns of Zweth and Overschie. In Delft, the bicycle highway begins right near the campus of TU Delft, which enables a Northbound cyclists to directly connect to any part of Delft via strong bicycle infrastructure, including the city center. In Rotterdam, the bicycle highway’s terminus is on the south side of the Maas River, after completing the Maas tunnel portion. Near the Mass tunnel and in the stretch just before it, it is a big hub for bicycle transit. Through the Bicycle network branching off of this bicycle highway, a cyclist can easily reach any part of Rotterdam.

This bicycle highway follows along the East side of the canal Delfts Schie the entire time, which makes it easy to keep a sense of direction. 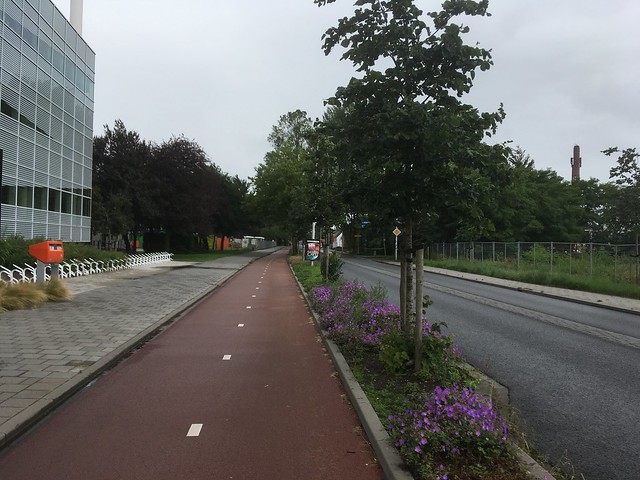 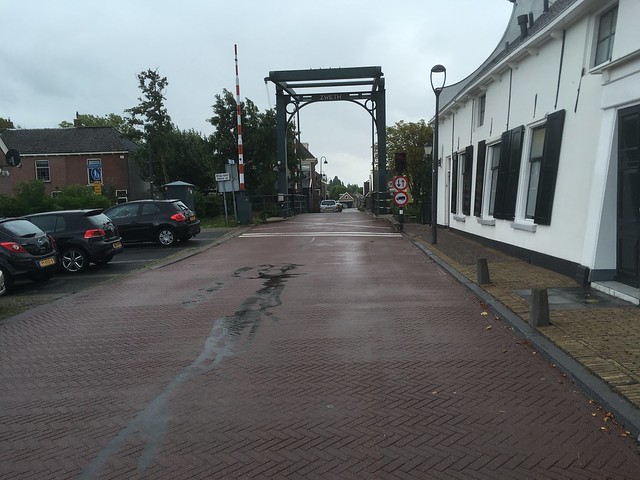 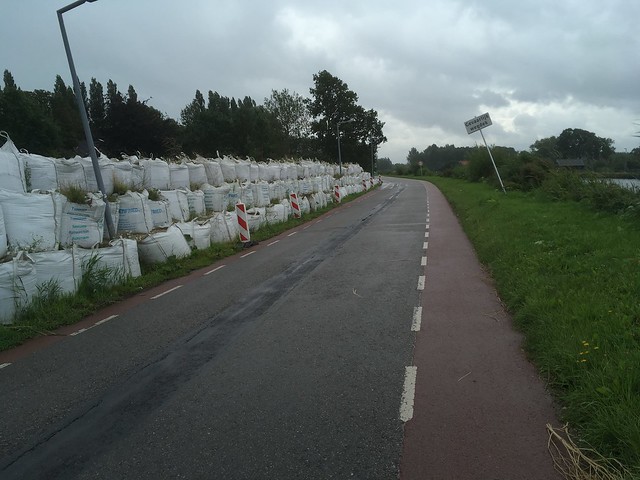 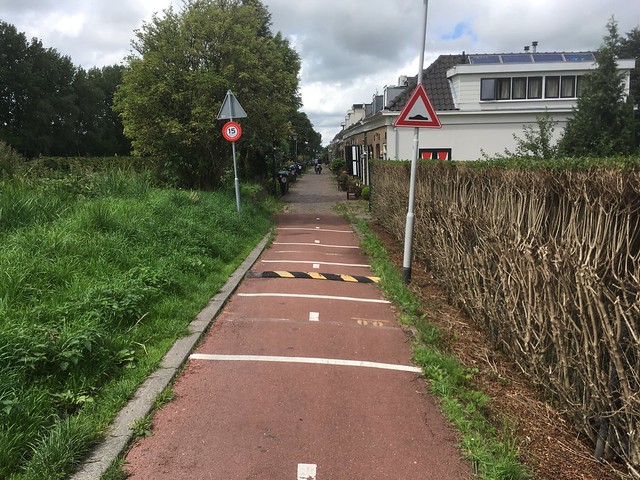 This bicycle highway was strategically designed to be a fast, low-stress, direct route between Delft and Rotterdam. The cyclists have priority at ever junction until just before the Maas river tunnel, where there are some signalized intersections. Cyclist priority is maintained through separation, pavement treatments, and speed control for cars’ approach speeds at junctions. By slowing cars down and making drivers more aware, the route is able to safely maintain bi-directional cyclists priority.

The beginning of the route follows a cycle track along the side of Rotterdamseweg. This segment is very low stress because of the low traffic volume (due to a through traffic destroyer, the Bayonette) and separation. This rural road has the potential to be high stress (and probably was when it used to serve as the main highway between Delft and Rotterdam), but they mitigate this potential by separating the cyclists, and killing through traffic on the road. The pavement on this stretch is beautiful red asphalt, which is very comfortable and attractive for cyclists. This segment exits Delfts more urbanized setting up until the small village of Zweth.

Through Zweth, bicyles enter into mixed traffic. This is safe because cars’ speeds are self-enforced to be slower than 30 km/h via brick pavement treatment and speed control devices. Going through this small town, is a very direct route, and is not inconvenient. The pavement here changes from asphalt to brick, back to asphalt.

After Zweth, the highway continues on a nicely paved cycle-track/standalone path. This section, from Zweth to the small village of Overschie, is delightful. It is very fast, taken care of very well, and through the beautiful Dutch countryside. This part runs parallel to the A13 freeway, only separated by farm lands/polders.

In Overschie, the bicycle highway feeds into a local, residential road. This segment causes cyclists to turn a bit more than before. There is a westbound curve and then a sharp southward turn to get back on the standalone path past Overschie. This is the least direct segment of the bicycle highway, but it is hardly inconvenient. They ensured that it was not an inconvenient passage through the village through smooth brick pavement that is comfortable for cyclists, as well as a small bridge over water, and using residents front street to connect to the stand-alone path that juts out to the South side of Overschie. This segment contains a speed bump to slow down mopeds, e-bikes, and bikes before entering Overschie. 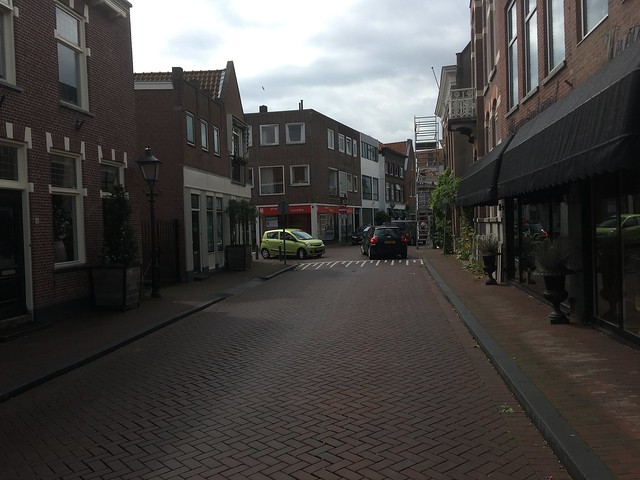 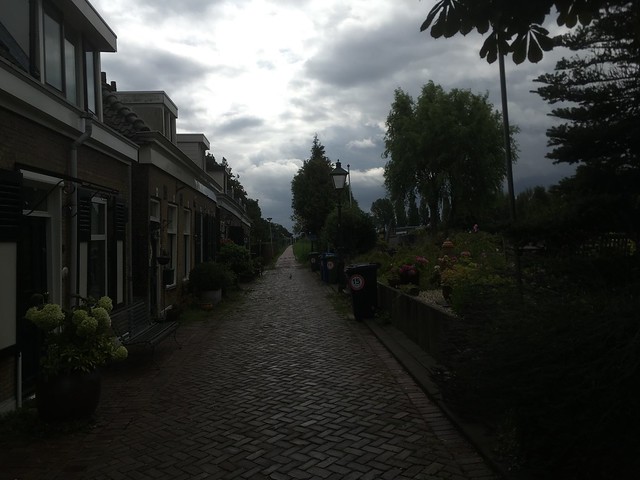 Finally, the after Overschie, the route was standalone path for the first chunk, then became cycle track alongside a Rotterdam road. There seemed to have been a barrier here that the developers overcame. There is a section that is intersected perpendicularly by a canal. At this point, the bicycle highway continues on a curved overpass/bridge. This was a significant investment to ensure this route was direct and attractive to cyclists. 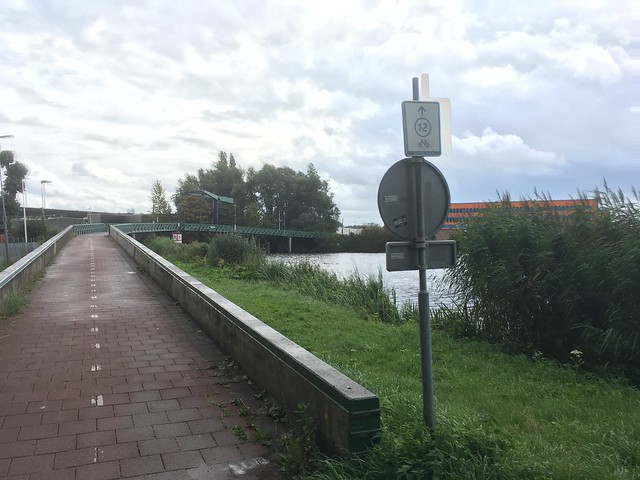 In Rotterdam near the Maas, there were approximately 4 signalized intersections where bikes had to wait for car traffic. This segment was all on cycle-track.

The Maas tunnel was likely the least coherent portion of the bicycle highway. It took me a bit to figure out how to get to the tunnel, I didn’t realize I would have to get off my bike and enter into a building that looks like the entrance of a tram station. However, once I figured it out, the escalator down was fast and the route was fast and straight. It was quite cool being able to ride so fast underneath the Maas. 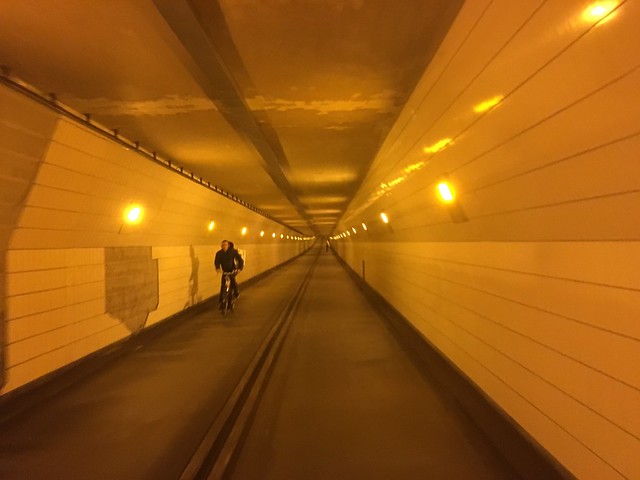 Lighting = Little has dedicated lighting, but 100% has lighting from nearby roads or the towns

It was quite easy to follow the route because I knew to just keep heading South, keeps the canal on my right, and follow the signs. The signage was very good. The only part that I struggled with is realizing where the entrance to the Maas bike tunnel was. 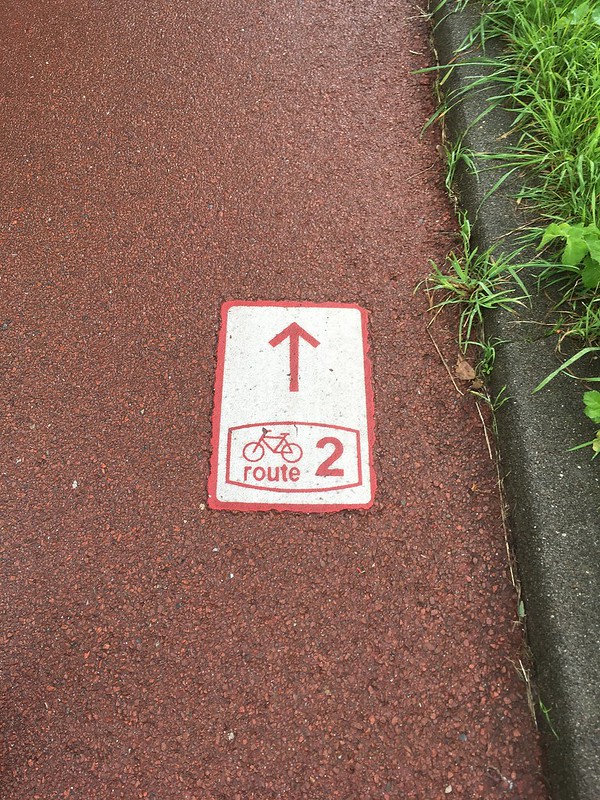 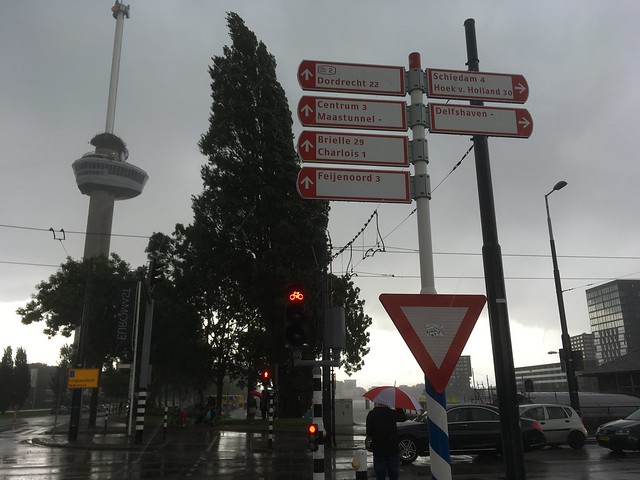 Remaining obstacles to be overcome.

It’s pretty complete, but priority at the signalized intersections in Rotterdam, either by intersection redesign or bicycle bypasses. Also, a seamless connection to the Maas bike tunnel would be a large improvement. 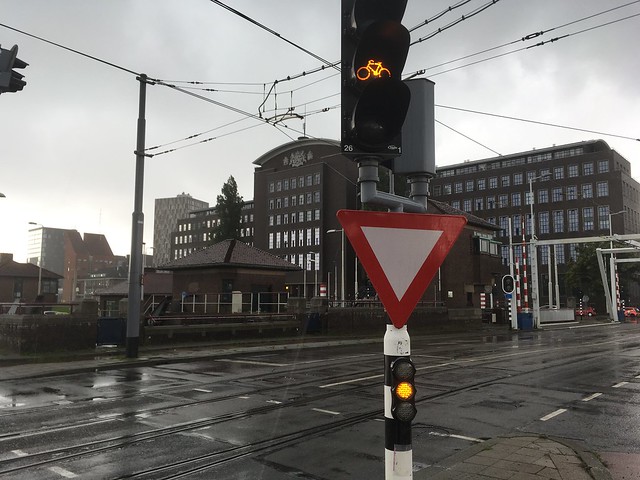 Stoplight for cyclists in Rotterdam 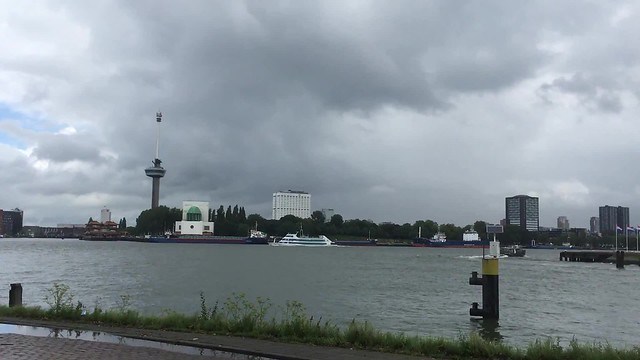 Overall, riding the bicycle highway from Delft to Rotterdam was a great experience. It was very fast, and I even beat Google Maps’ prediction for how long it would take! I am a huge proponent of low-stress cycling, and this route was perfect for that. I personally could see myself commuting along this stretch every day, with the help of a Pedalek, of course. Definite 10/10 route! 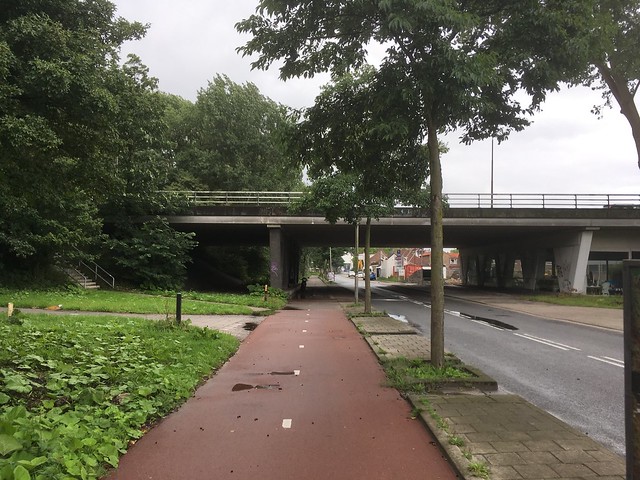