Bike lanes are cycling facilities that are part of the road and separated by pavement markings. In the Netherlands, bike lanes are only present if the road is 1+1 with no parking.  Previously, though, bike lanes were built in 1+1 roads with low turnover and residential parking or 2+2 roads that are divided and have no parking. 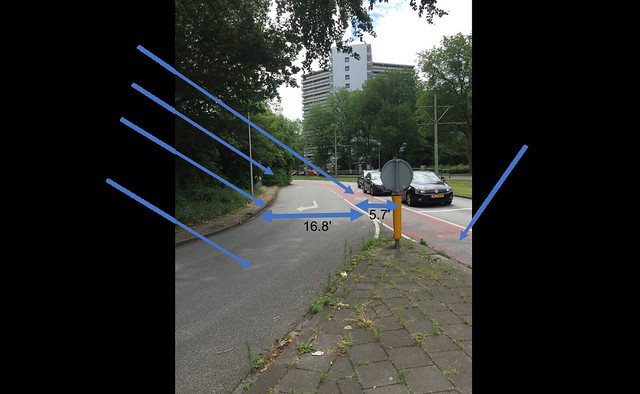 The turning lane pictured for stop B4 requires vehicles to cross over the through bike lane. Crossing over a bike lane can be a safe maneuver if the turning lane is designed and constructed with certain dimensions. The turning lane pictured, however, has a large radius, width of 16.8 feet, and is long. These all allow cars to make the turn much faster than they should and increase the chances of a crash with a bicyclist.  Crossing at this intersection also seems unsafe. The widths of the traffic lanes are wider than necessary and make crossing more dangerous.  There aren’t crosswalks across every approach, causing some people to jaywalk. 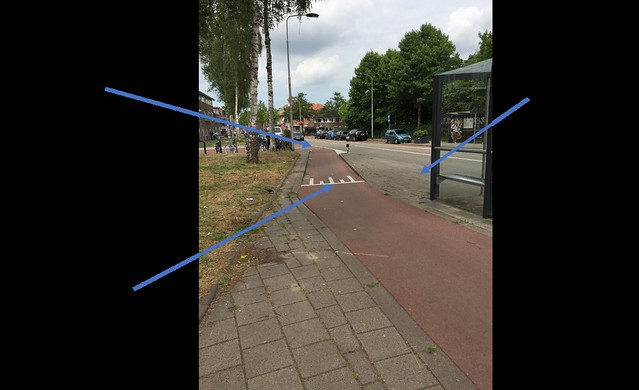 The bus stop at stop A9 provides a safe experience for both bicyclists and pedestrians. The bus stop is on a median, which reduces the risk of bicyclists from crashing with pedestrians who are getting off the bus.  With the design pictured, pedestrians have enough room to get off the bus and then look for oncoming bicyclists. Additionally, as the bike lane curves to go around the bus stop, bicyclists are forced to be more alert than if they were to continue straight. The bike lane also raises to match in with the existing sidewalk so that way the path from the sidewalk to the bus stop is wheelchair accessible.

The pocket bike lanes at stop A10 provide a safe way for turning vehicles to get into the turn lanes. The radius and length of the turning bays at this stop aren’t too large so vehicles are forced to slow down and become more aware while crossing the bike lane.  This intersection also has turning bike lanes, which prevents bicyclists from crossing over through traffic to make their turns. Making a turn, though, got intimidating once in the intersection. The pavement markings for turning bikes aren’t very clear in the middle of the intersection. Additionally, the traffic lights are only located on the nearside of the intersection, so once vehicles and bikes that are making a left turn are in the intersection they can’t confirm that they still have the green light.

A bike boulevard (quietway or greenway) is a network of mainly calm, local streets. These local streets must be easily connected and promote through bicycle traffic and discourage through motor traffic. 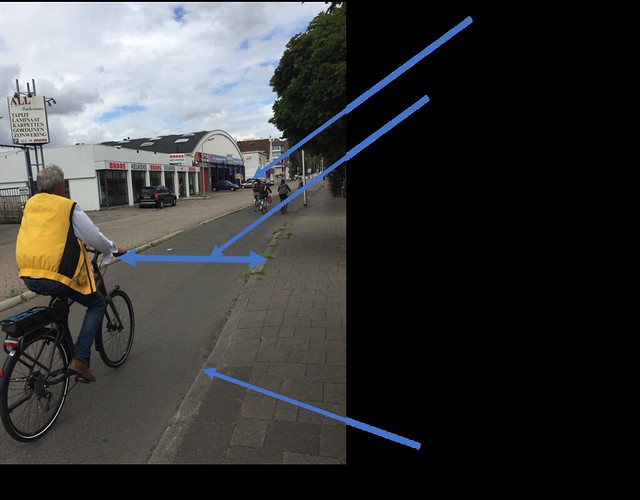 The bike boulevard pictured has a narrow enough width that cars that are driving on it are required to go slow. The width, however, is wide enough for bicyclists to ride side by side and pass each other. The elevation separation between the boulevard and sidewalk prevent pedestrians from using the boulevard when there is enough sidewalk. Something that I noticed is that after the bridge continues the bike boulevard into the cycle track, the sidewalk on one side ends.  This bike boulevard provides a connection over the canal and is more comfortable than the existing options north and south of this boulevard. 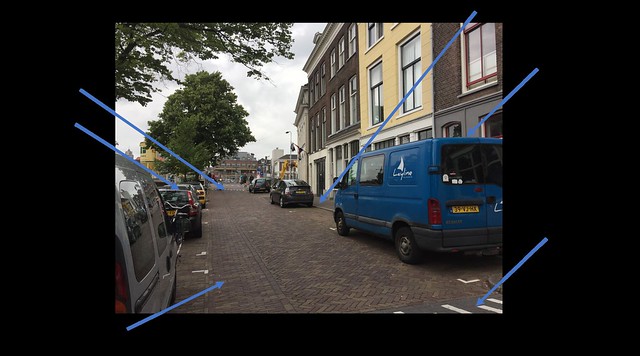 Stop C5 is a historic road converted to a contraflow street. Due to the physical and historical restrictions, the road was made into a one way vehicle street and two way bicycle street.  To enforce a low speed limit, the road maintains its small width and has a bumpy texture, which is uncomfortable for cars when they’re traveling fast. Additionally, at the intersection at the end of the road, there’s a speed hump, which makes vehicles more alert of opposing traffic. On a road like this, bicyclists feel comfortable because traffic is minimal and cars are going at low speeds.

Cycle tracks are bike lanes that are physically separated from vehicular traffic. They can be either one way or two way and can be level with the street, sidewalk, or at an intermediate height. 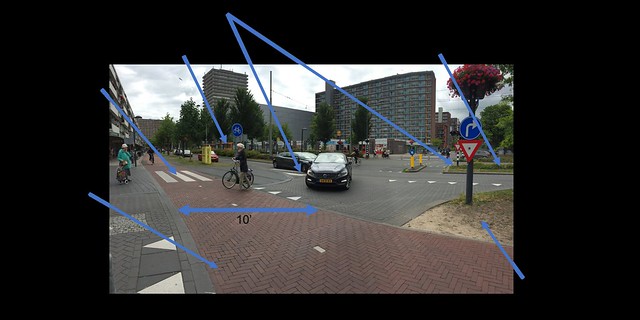 Stop A2 originally had four total lanes, two in each direction, and now has two total lanes with one going in each direction. From this road diet, cycle tracks on both sides of the roadway were added. The cycle tracks have a comfortable width of 10 feet total.  The road diet and addition of a location for pedestrians to stop before and after the tram tracks, has made this intersection much more comfortable for pedestrians.  For bicyclists, there is ample separation between the cycle track and vehicular traffic, making them much more comfortable as well. 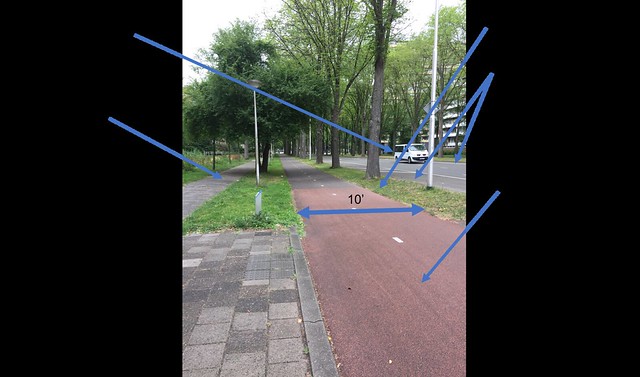 Stop A3 is a second example of a road diet. Originally, the road had two through lanes in each direction as well as left and right turn lanes. All turning bays were removed, which causes drivers who are turning to slow down, as they are typically behind through traffic, as well as be more alert of bicyclists on the adjacent cycle track.  When crossing, pedestrians only have to worry about traffic in one direction because of the median. The median allows pedestrians to cross one traffic movement at a time, which decreases the risk of a crash.  The width of the cycle track is 10’ and is separated from vehicular traffic by a wide grass strip, which both make cycling much more comfortable. 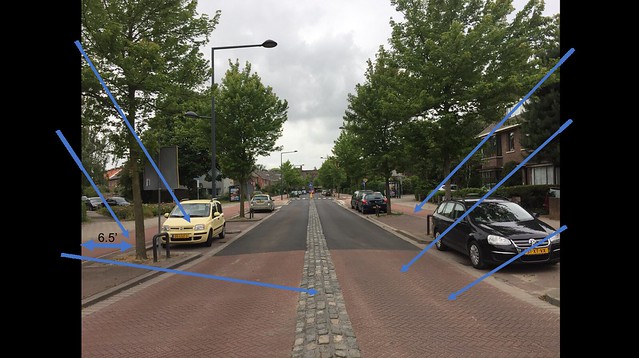 Stop D8 also underwent a road diet.  It now is a two way road with one lane going in each direction and one way cycle tracks going in each direction. This road is a residential road so most of the traffic is local and should be going slow. In order to enforce a slow speed, the traffic lanes are narrow and near intersections they are paved with brick pavers so the surface is uncomfortable to drive on fast.  The median is also rough, making passing harder and unappealing. The width of the cycle tracks are 6.5 feet and are a fair distance from the lane of parked cars, which removes the chance of dooring.

Advisory bike lanes are suggested lanes that are marked with dashed pavement markings.  They can only be implemented on roads that are unlaned and have an ADT from 2000 – 5000. Cars may use the bike lanes when two vehicles are passing each other.

This advisory lane is located in a school zone.  The dimension of the vehicular lane increases from 13 feet to 16 feet throughout the school zone to accommodate an increase in cars attempting to park in front of the school for pick up and drop off. In order to minimize speeding through the school zone, speed humps were put in place at the pedestrian crossing.  It seemed as though the vehicles were going faster than the speed limit and there was a lot of traffic (both vehicles and bicycles) at the time we visited the site, which made it seem that parents picking up their children at school or students traveling home alone may not feel as safe as they should in a school zone. 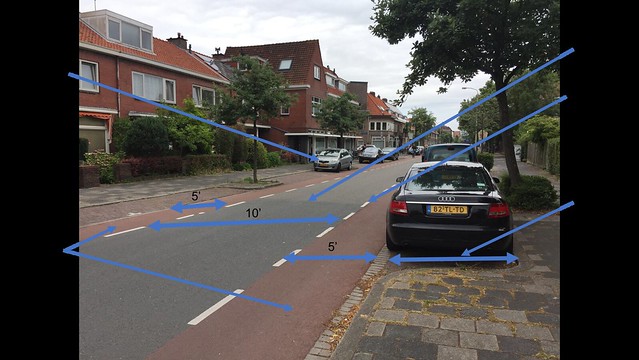 Stop C7 is a local street with access to residential areas, therefore it doesn’t have much through traffic. Because of limited through traffic, advisory lanes are very comfortable to ride in. The road has no lane separation markings in the middle of the road and the black asphalt portion of the road is only 10 feet wide. This width causes drivers to be very alert of opposing traffic as well as bicyclists as they must share the advisory lanes with bicyclists if two vehicles going opposite directions have to pass each other. The width of the parking lanes seems too small to fit some vehicles, but because this road is on a local street and was adjusted post construction of homes to accommodate bicyclists, the parking lane width is the smallest it can be. This, however, can promote the use of smaller cars or no cars at all. 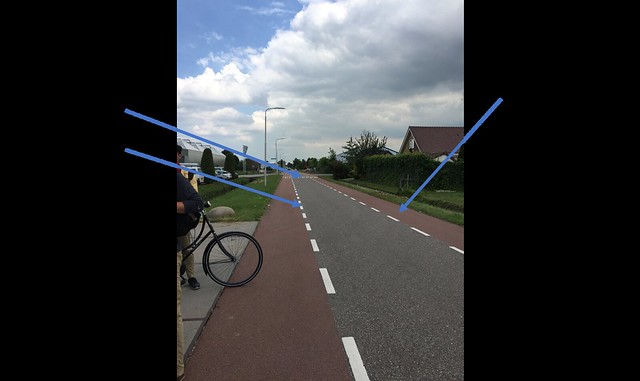 Stop B11 is a rural local road, which means that there wasn’t much through traffic and that vehicles travelling on this road should be travelling slowly. To enforce this, stop B11 was turned into a road with advisory lanes. The black asphalt portion of the road is very narrow and there are speed humps near intersections, which greatly help enforce low speeds and make drivers much more aware of bicyclists and pedestrians.

A service road is an existing road that is solely used for local traffic, which allows bikes to safely travel in them. Speeds and volumes are typically low so bikes and vehicles share the road. 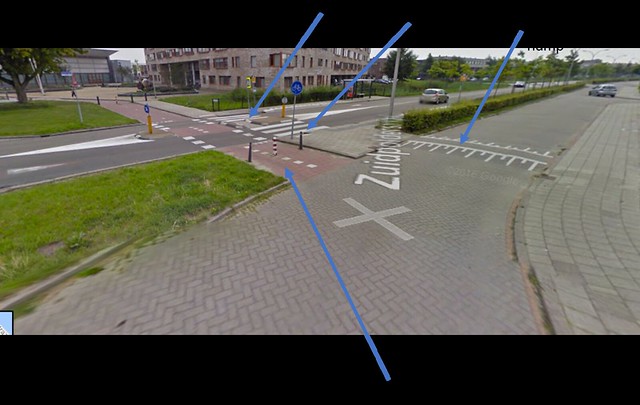 A bicycle highway is a separated cycle track that typically travels along a highway route or connects two major towns/cities and has minimal to no stops along the way. 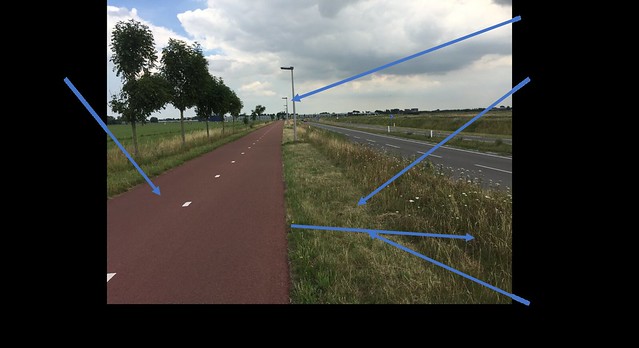 The bicycle highway at stop C13 has a wide path that continues without any stops for a considerable distance. It serves as a safe and direct path for bicyclists to get from the suburbs and other small cities to Delft. The path is wide enough that people can ride side by side and be passed by comfortably.  The path is also lit, which promotes the use of the highway during the winter when there is not much daylight.  The grade change and width of the grassy barrier between the bike highway and vehicle highway significantly decrease the chance of any vehicle getting onto the bike highway.  The vehicle highway is only one lane in each direction, which helps enforce the speed limit.