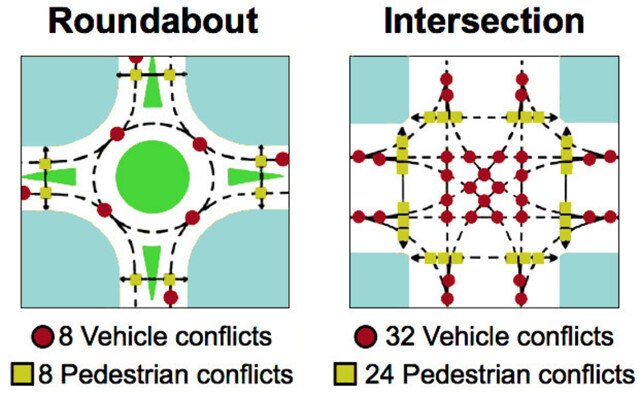 Statistically, roundabouts are safer than other types of intersections, with 39% fewer vehicle collisions, 76% fewer fatalities, and 90% fewer serious injuries according to a study conducted by Kansas State University in 2000. This low rate of incidents at roundabouts is no accident. Roundabouts are systematically safer than normal intersections, with only 16 conflict points between road users as opposed to 56 on a conventional intersection (see figure above). Furthermore, the nature of a roundabout’s design greatly reduces the risk of the most devastating types of collisions: head-on and T-bone.

Not only do roundabouts have fewer conflict points than intersections, but they also satisfy Dutch principles of systematic safety. The Dutch, when designing roads, try their best to fulfill four design principles that ensure roads are safe and prevent drivers from making mistakes. The two principles that apply most to roundabouts are Speed Control and Separation, and Predictability and Simplicity.

Roundabouts are a very popular and effective method of speed control, especially when entrance and exit lanes meet the roundabout at right angles. The horizontal displacement experienced when going around a roundabout cannot be done safely or comfortably at high speeds, so cars must control their speed when approaching a roundabout, even if the roundabout is empty. Many roundabouts also design for separation of pedestrians and cyclists, usually by including separated cycle tracks and sidewalks that run around the outside of the roundabout and demand priority from cars (see left-hand photo below). In high volume roundabouts, this is sometimes still not sufficient as it causes traffic jams or forces crossing of multiple car lanes at once; in these cases further separation is necessary, sometimes in the form of a grade-separated roundabout for bicycles as seen in the right-hand photo below.

Roundabouts are also designed to be intuitive to any new driver that encounters them. This reduces the risk of operator error on roundabouts. Additionally the movement of cars on a roundabout is very predictable: everyone moves in the same direction, reducing the number of directions of which drivers need to be wary. By contrast, turning left at a conventional 4-way intersection requires considerable vigilance from drivers. Finding a gap in traffic while also watching for crossing pedestrians is often quite difficult, especially on multi-lane arterial roads.

Relevant Types
Over the years, several different types of roundabouts have been developed, each of which serve different purposes. The two types proposed on Tremont Street are a simple single-lane roundabout and a knee roundabout.

Single Lane
The single lane roundabout is the most common type of roundabout. It is also both the safest and most efficient design to handle traffic at a 3- or 4-way intersection. As mentioned, single-lane roundabouts minimize conflict points between road users minimizing risk of incident. They also do not rely on signals, which can be disobeyed or can malfunction. On Tremont Street, a single lane roundabout is proposed at the intersection with Dartmouth Street, which will increase predictability and simplicity, and reduce delay at the the intersection, which is currently signalized. 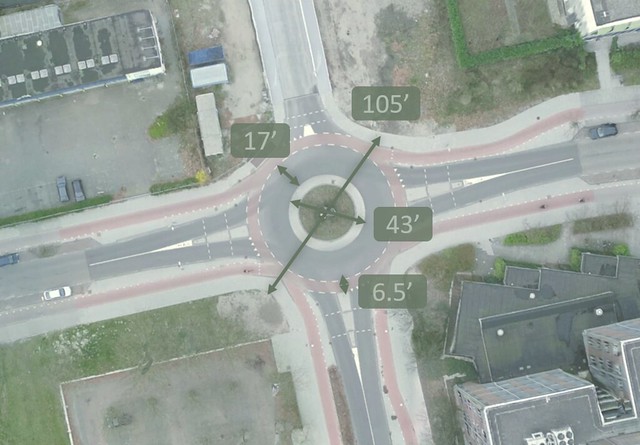 Inspiration for the Dartmouth intersection design comes from Ijsbaanpad in the Amsterdam area (photo below). This intersection serves as a perfect model for the Dartmouth intersection for two major reasons. Firstly, the design of Ijsbaanpad (the horizontal road in the photo) is very similar to the proposed design of Tremont Street. It is a 1+1 lane road with wide sidewalks and one-way cycle tracks on either side. Secondly, the dimensions of the roundabout fit within the existing dimensions of the intersection between Dartmouth Street and Tremont Street. The diameter of the Dutch roundabout, including bicycle and pedestrian infrastructure is 105 feet, while the shorter diagonal distance of the Tremont-Dartmouth intersection is 106 feet. Ijsbaanpad serves to prove that a well-designed single-lane roundabout is feasible on Tremont street and, if implemented, would reduce conflict between road users. 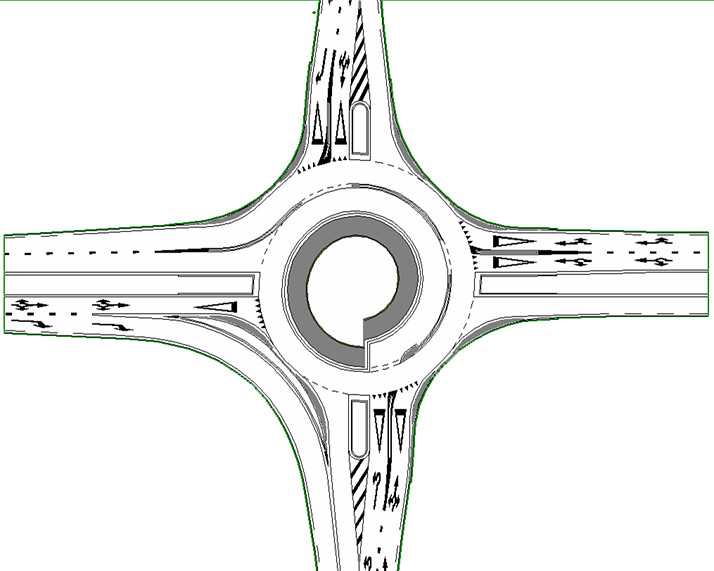 Knee roundabouts are simply normal turbo roundabouts that have been modified to serve a stream of cars that is going predominantly left and right (figure below). A knee roundabout is proposed for the intersection between Melnea Cass Boulevard and Tremont Street in Boston. A knee roundabout is ideal in this case for several reasons. Firstly, there is a prominent flow of traffic between the western portion of Tremont Street and the southern portion of Melnea Cass. Therefore, a knee roundabout is designed perfectly to handle this type of traffic flow. Not only will it maintain the current traffic flow, it will emphasize the pattern to road users who may have otherwise used Tremont as a through road and direct them to take Melnea Cass to the I-93 to downtown Boston. This was discussed in the “Network” section of the design proposal. Secondly, as mentioned, a roundabout would greatly reduce the conflict between road users when compared to the existing signalized intersection, making this rather hectic intersection safer for everyone involved.

Below is a Dutch example of a knee roundabout. It is located off the A12 in Zevenhuizen. The purpose of the roundabout is to direct traffic from the southeastern portion of Bredeweg to the N219 (which subsequently connects to the A12 highway). It also stresses the small size of the northwestern portion of Bredeweg and helps maintain it as a local street. The intended traffic flow is denoted by the orange arrows on the figure below, with the width of the line corresponding to approximate relative volumes. Emulating these design features in the intersection between Tremont Street and Melnea Cass Boulevard will likely make the intersection safer and emphasize the intended functions of the roads. 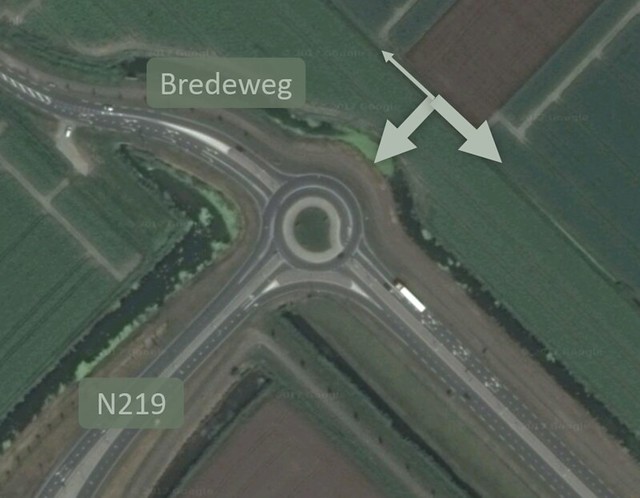 Special thanks to Jude Arbogast and Jesse Morrow for their graphic and information. To see their work on roundabouts, click here.