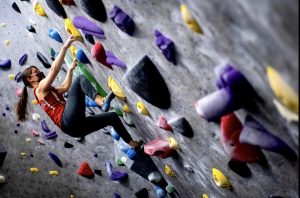 Climbing Back into Action

Club Rock Climbing has been slowly but surely getting back into action this season. When the weird circumstances of the pandemic left them unable to physically practice in person, they turned to other alternatives to keep the team connected. Zoom calls were their go-to as they continued to build their team dynamic despite the restrictions

Founded in 2014, the team found immediate success by winning the New England Regional Championships and placing second at the National Championships in Melbourne, Florida. Due to increased popularity, the team now maintains a roster of 24 total athletes: 12 male and 12 female.

In addition to competition-related endeavors, Northeastern Climbing Team members give back to the community through volunteer events and outreach. The team has partnered up with organizations such as OneSummit, Camp Casco, the Access Fund, and the HelpHOPELive Foundation to facilitate a positive impact in the community, and is continually pursuing ways to do so on the local and global scale.

The climbing team hosts tryouts for the team in the Fall and in the Spring.

In the Fall, all 24 of our rosters spots (12 male, 12 female) are open to everybody trying out. Climbers can choose to try out on boulders or on ropes.

In the Spring, we host limited tryouts, only to fill the roster spots of teammates who are leaving to go on a co-op, dialogue, or another reason. These tryouts feature exclusively boulders.

A: Absolutely not, although you would love it 🙂

Q: Do I need to know how to belay?

Q: I’m not sure if I’ll make it, should I bother trying out!

A: You should definitely tryout! It’s a great way to meet other enthusiastic climbers and you could always make it!

HOW MANY PEOPLE ARE ON THE TEAM?

HOW OFTEN DOES THE TEAM PRACTICE?