The goal of this project is to design build and fly a fully functioning remote-control vertical takeoff and landing, “VTOL,” aircraft. This aircraft will take off vertically in a multirotor configuration then convert to forward flight using a fixed wing configuration. This aircraft will also be able to fly autonomously to GPS waypoints using the onboard flight computer. We will have this fully functioning by the end of the semester.

Although this sounds difficult to achieve, with my experience in building RC aircraft, I have no doubts we can achieve our goal. I have built both RC multirotors and RC fixed wing aircraft from the ground up, so this is very obtainable.

The most critical part of this project is being able to mix both aircraft types from an electronics standpoint. There is an open source flight computer called Pixhawk which can be setup to handle VTOL aircraft. Not only does this flight computer manage the transition between fixed wing and multirotor configurations, but it also adds autonomous functions to the aircraft such as waypoint navigation which is really cool. 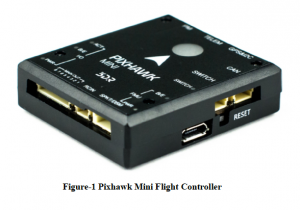 The airframe will be built off the RV Jet kit which is a proven design for stability and ability to carry a decent payload. It needs to be able to carry the extra weight of the multirotor setup which is not normally part of the build.

The multirotor platform will then be built into the airframe with a standard boom style construction. We can design and 3d print mounts that can be epoxied into the foam of the wing of the aircraft to fixture the multirotor booms. 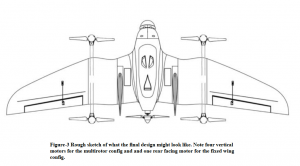 The rest of the build would consist of wiring and configuring the electronics then testing. Hovering could be tested right on campus, but the forward flight would need to be tested in a larger park or preferably a field outside of the city. 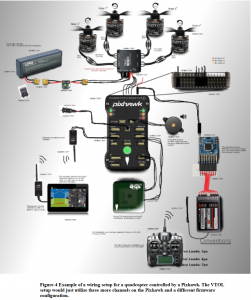 As stated before, the end goal of this project is to get the aircraft fully functional by the end of the semester. Figure-5 outlines the general timeline of the project. 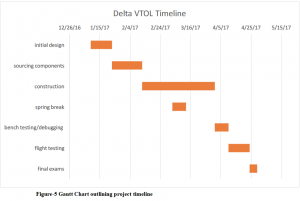