AIAA is working on our very own liquid rocket engine. To date, we have only ever used solid rocket engines. Join this project if you are interested in liquid propulsion, engine design, designing test stands, chemical systems, or very difficult technical challenges in general. 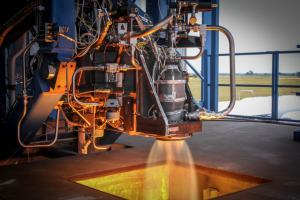 Liquid Rocket Engine is attempting to design, build, and test a small-scale, bi-propellant liquid rocket engine. The propellants used would be liquid isopropyl alcohol and gaseous oxygen. The current design of the engine yields a calculated thrust of 50lb. The engine that LRE would like to build during the Spring semester would not be designed be put into a launch vehicle, but rather used to conduct a static hot-fire test.

This project requires a team with a diverse skillset, but will also be a learning experience for everybody involved. A lot of math is involved, which gives students the opportunity to apply many of the things they have learned in class to a practical application. This upcoming semester will also be very hands-ons, and will present the opportunity for team members to machine parts and assemble them into a rocket engine as well as many test systems along the way. Additionally, the dangerous nature of a rocket engine provides students with the opportunity to learn and apply proper safety procedures in their designs and tests.

LRE will benefit Northeastern’s AIAA as a whole in the present and in the future. For now, simply working on a liquid rocket engine will make us stand out to companies and to other clubs. In the future, a launch vehicle built by NEU students outfitted with our own liquid rocket engine would open up a new tier of rocketry and bring the club to the next level.

What we’ve done during the past Fall semester

We spent the majority of this past semester designing the engine. Many calculations were needed for all of the subsystems of the engine. By the end of the semester, we nearly completed the design of the engine, and completed the design of the feed system. At the same time, we also purchased and tested a variety of sensors and electronics that will ultimately be used for further tests. We built a Water Flow Test Stand, which was used to test some of the sensors we purchased, but will also be used to test many of the components we plan on machining this upcoming semester. Additionally, we purchased some raw metal stock and began to machine some components of the engine. 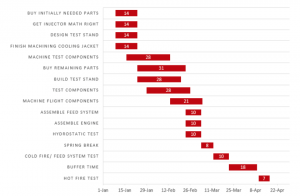