In May 2014, we were awarded an Undergraduate Provost Research Grant to design, build, and test high altitude rockets. With a time constraint of four months, we set out to build rockets with multiple deployment events, radio tracking systems, and NAR Level 2 engine capabilities. A total of five rockets were built, helping four members achieve high power rocket certifications. The four months of research culminated in a proof-of-concept rocket designed to fit the needs of the NASA USLI competition.

Below is a picture of our 6 foot tall rocket: 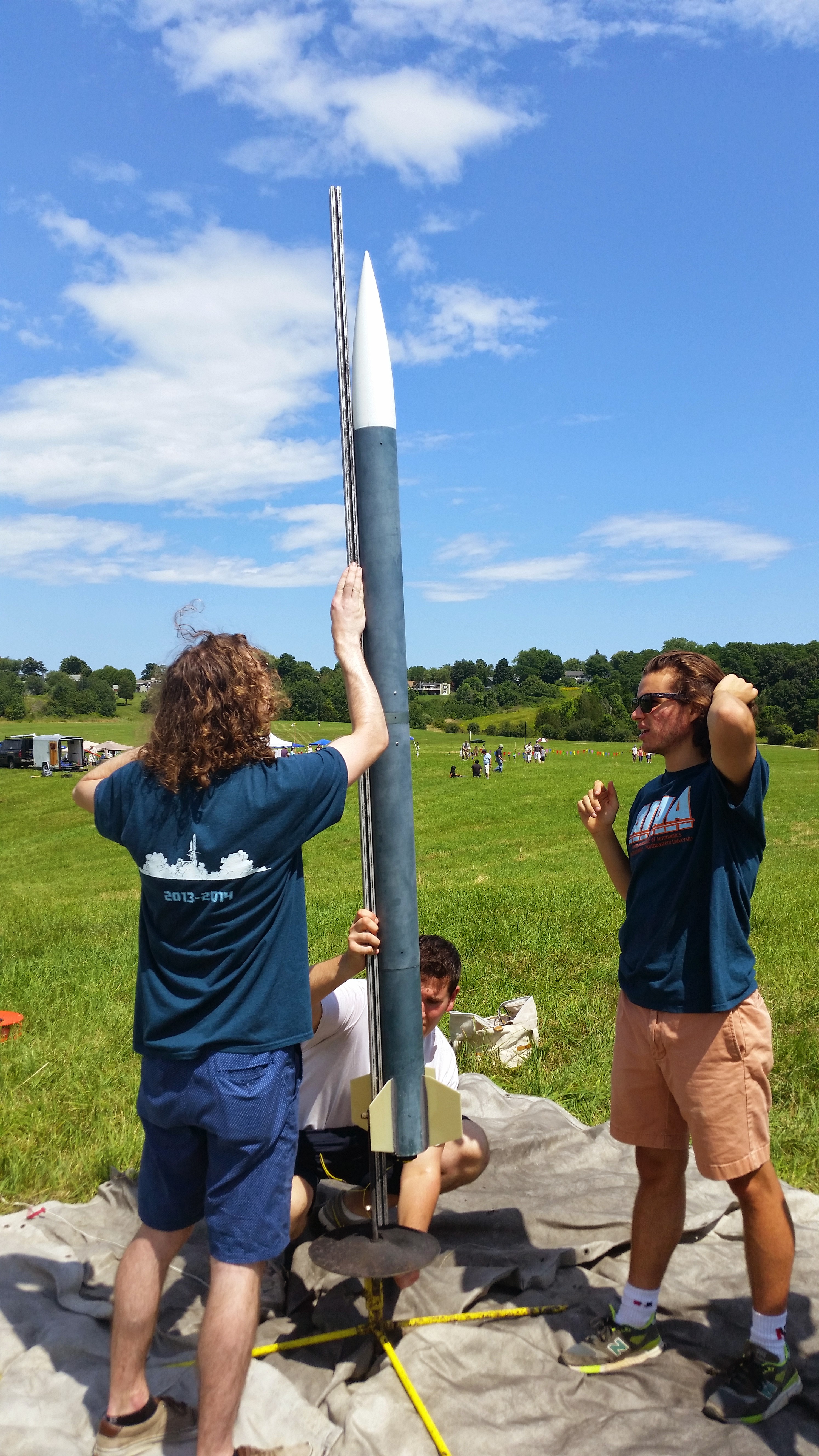 This final rocket, named Sir Jim Jam Flim Flam, carried multiple altimeters which monitored and recorded altitude as well as controlled the ejection events of the drogue and main parachutes. It also carried a Big Red Bee radio beacon, which emits a radio signal at a preset frequency.  A club member on the ground equipped with a radio receiver and a directional yagi antenna can track the location in case we lose sight of the rocket.  The rocket was designed to eject a small drogue parachute at the apogee of its flight to arrest the terminal velocity and stabilize the descent. At a predesignated lower altitude, typically around 500 feet, the altimeters would then fire a second ejection to release the main parachute. 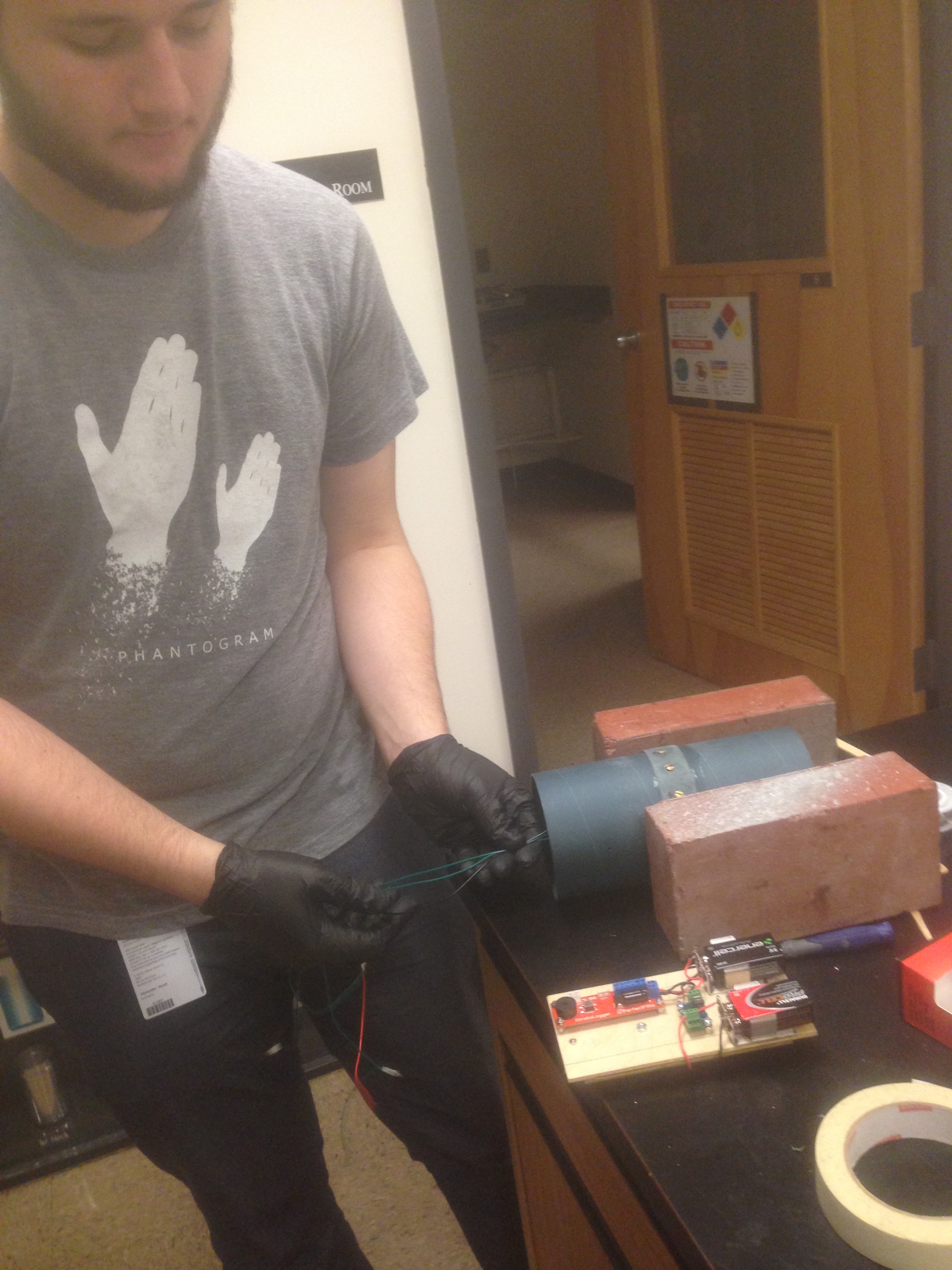 Two prototype rockets designed to break the speed of sound were built to test material durability under mach speeds.  One rocket was equipped with temperature sensors at the nose cone and the rocket body, storing the temperature data on board. A tapered tail cone and elliptical fins were used to dramatically reduce drag. 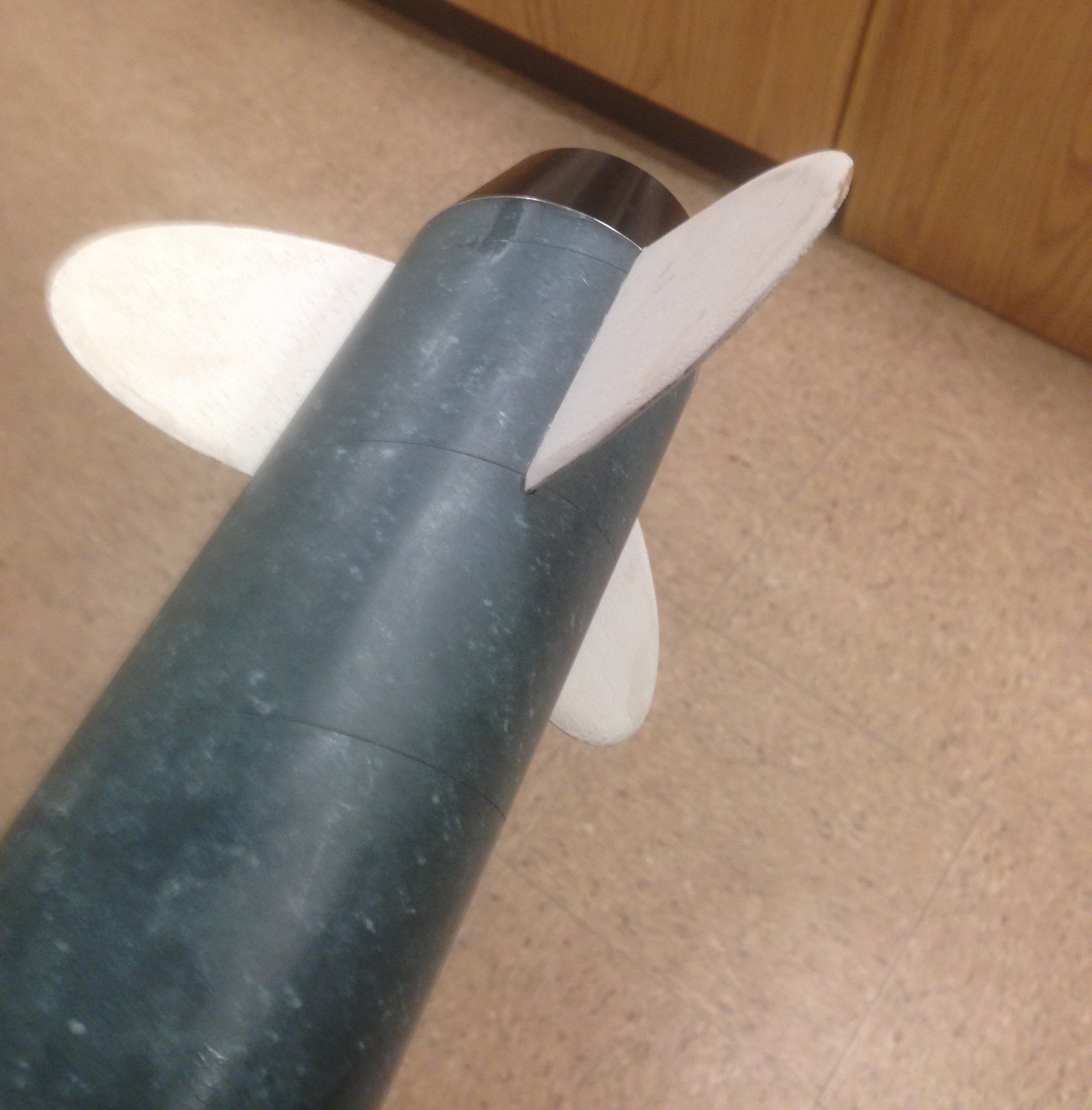 Elliptical fins provide the lowest drag profile to the rocket. The tail cone was custom machined to mate with our airframe.

On our other experimental rocket, we attempted to use a fiberglass wrap to support the fins under high velocities.  Under mach speeds, there can be a high torque at the base of the fins, possibly compromising the attachment point.  Fiberglass provides an incredibly strong protective layer.  We used raw sheets of fiberglass, along with resin to form the protective layer.  A final sanding allowed for a smooth finish.

Below is an image: 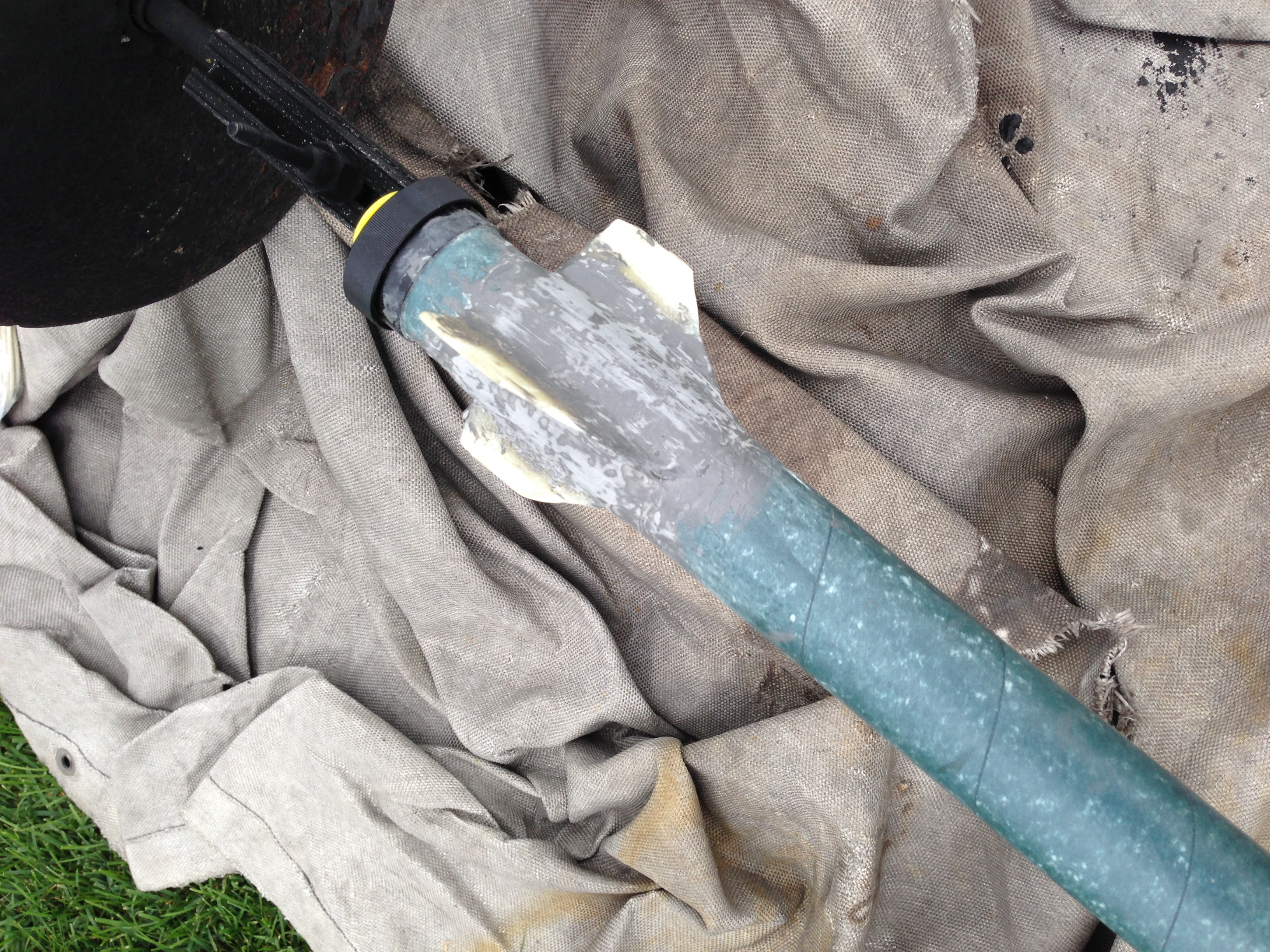 Fiberglass mold holding the fins to the airframe

Another technique we perfected during our summer research was the use of a two-part polyurethane expanding foam. The foam has a expansion rate of 15:1 upon mixing the two solutions. After 20 minutes, it will harden and adhere to the surrounding surfaces. It does a superb job at filling every gap in a fixed volume. We use the foam in the motor sections and fins of our rockets. The fins come through the wall and mate with the inner tube that holds the motor. We then fill that volume with the polyurethane foam which grabs onto every surface and strengthens our fin connection. We also use it to fill our nose cone when we feel the rocket needs more mass at the top of the rocket. Adding this mass will increase the rockets stability and allow it to better react to atmospheric loads. The foam is an ideal ballast mass because it cannot move around during flight, potentially causing a shift is mass and a loss in stability. 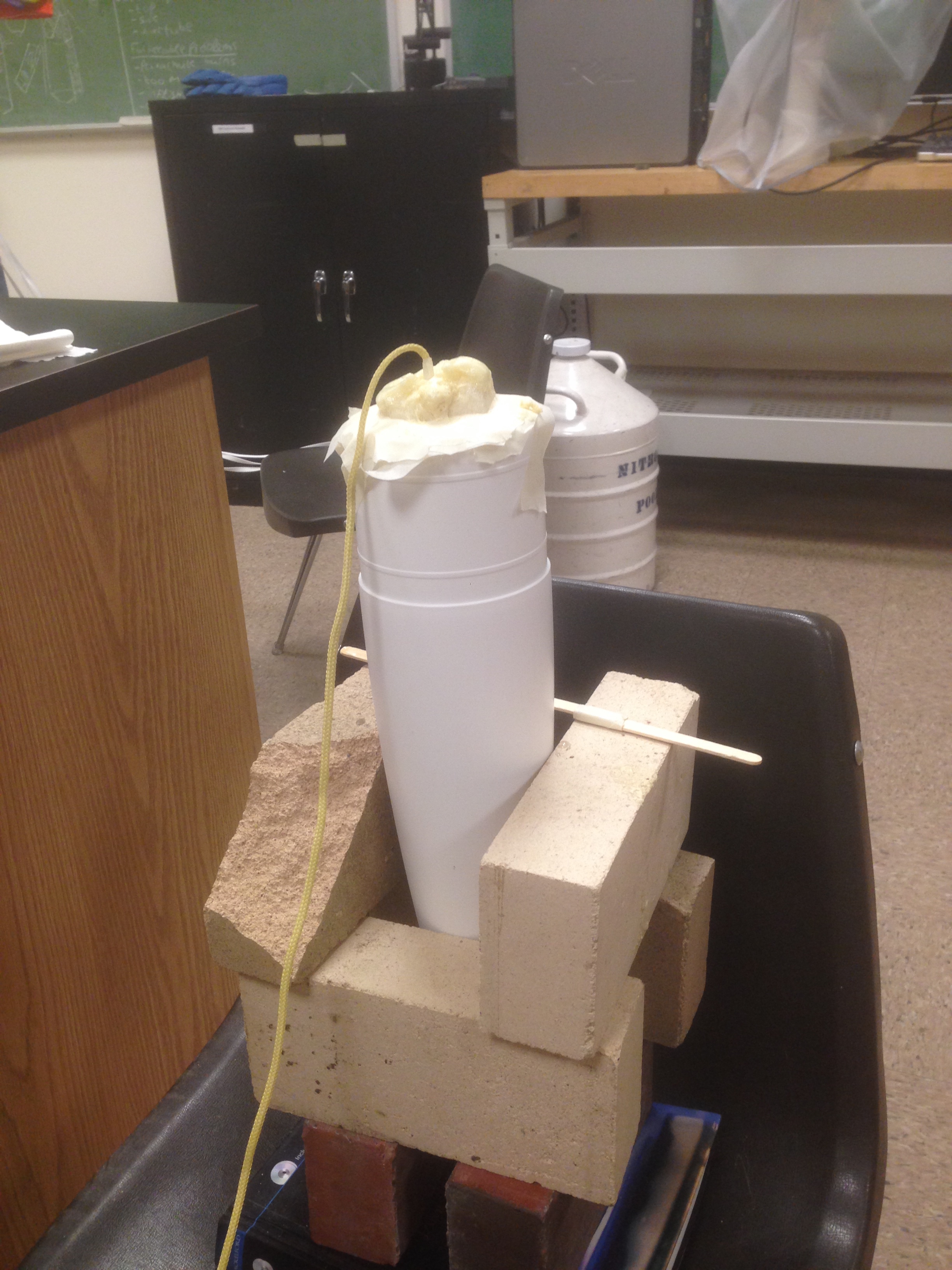 Two-part expanding foam settling in a nose cone. A Kevlar shock cord is fixed inside with a large washer, which the foam adheres to.

We consider this research grant an enormous success.  Throughout the four months, we significantly increased our repository of rocket knowledge and building techniques. There were a few failures and lost rockets, but we discovered that a launch failure provides us with the opportunity to learn something new. Of course, everyone would prefer a perfect record, but we look at any launch failure as a learning opportunity for our own edification. When we lost a rocket, the next was built with our new knowledge on full display. We plan to explore the inner workings of rocketry even further next summer. We won’t be satisfied until we have a complete knowledge of the vehicles that can take us to the stars.

Below is a video of our first launch with our rocket, Sir Jim Jam Flim Flam.  This launch demonstrated the culmination of many new systems and components we learned about throughout our summer research.