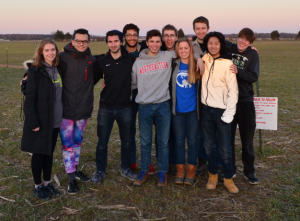 Project Karman is Northeastern University AIAA’s entry into the University Space Race; an unofficial competition to be the first university to launch a rocket past the Von Karman line of space defined as 100km above sea level. Read more about the project by following the links under the “About the Project” tab on the left.

Project Karman is now partnering with AeroTech and Triton Space Technologies to test methods of igniting our sustainer stage! Read more about it on our home page. The Karman team will be testing this system on our first two stage rocket at LDRS on April 8th!

The NUSS Lazarus was launched on May 11th at MDRA, with a completely successful test flight. The projected apogee was 1889ft, while the altimeters reported an altitude of 1884ft. The rocket flew perfectly straight in the 15mph winds, and all systems worked as intended, verifying the viability of the experimental CO2 ejection system, and dual deployment using a Tender Descender. The NUSS Lazarus will go on to serve as the sustainer stage to Karman’s first 2-stage test rocket to be flow at LDRS on April 7th 2017.