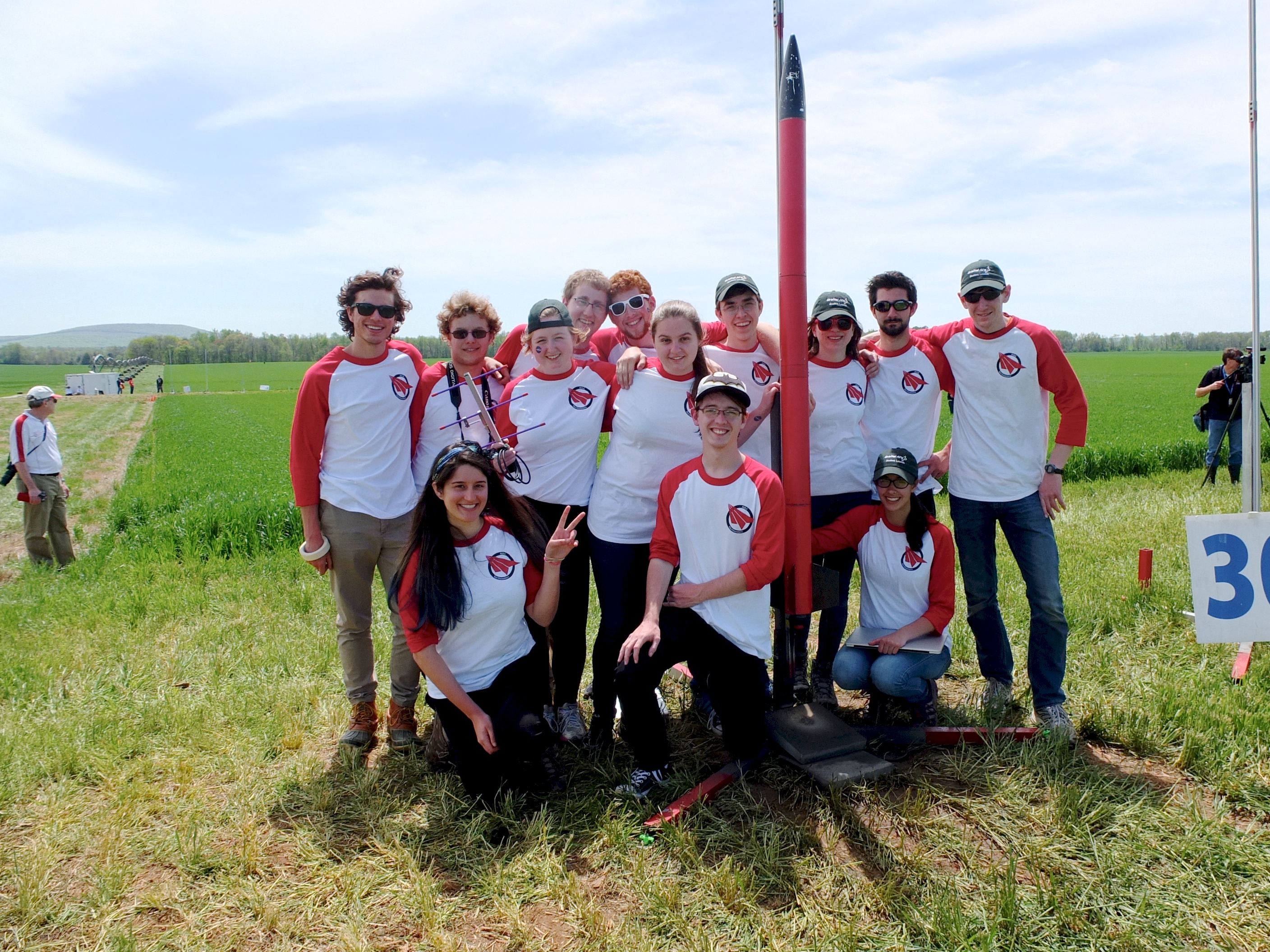 AIAA on the launch pad in Huntsville, AL.

We have been selected to compete in the 2015 NASA Student Launch competition. Twenty-two universities from around the country were chosen to design and build a custom rocket/robotic system. The challenge laid before us is to create a system that can autonomously retrieve a sample, insert it into a rocket, prepare the rocket for launch and ultimately launch the rocket. The goal of the competition is to mimic a sample return mission to Mars, where NASA would bring back a Martian sample for scientists on earth to study in the lab. Teams will travel to Huntsville, Alabama this April where teams will be given a tour of NASA’s facilities, present their developed technologies, and compete against each other. Our team is thrilled to be apart of this years competition and is already hard at work!

For the next four months, our team will be working on a new rocket that will interface with an autonomous ground support system (AGSE). The rocket will be our largest and most complex to date. It will be capable of ejecting a payload capsule to carry the sample safely to earth. The payload capsule and rocket will each be equipped with their own set of electronics, including a GPS and altimeter. Each section will have a radio communication device as well, allowing the data to be radioed back to our ground station in real time. This will allow us to monitor both location and height throughout the entire flight.

The AGSE will contain the rocket and payload retrieval system in a single housing. This was done to mimic a real mission as the system would need to be dropped through the Martian atmosphere. This provides an easy profile to drop to the surface, upon which all the doors will open allowing the retrieval system to search for a sample and the rocket to launch.

The sample retrieval system is equipped with a machine learning based vision system which will be trained to search for NASA’s mock sample, a PVC pipe.The vision algorithm will focus on the relative magnitudes of the traditional red, green, and blue channels as well as use filtering to include infrared images. Spatial characteristics of these images will also be used to improve the accuracy of our results. The vision system’s processor will talk to the processor which controls the motion of our retrieval belt, positioning the belt in the most advantageous location and angle for successful payload retrieval.

The conveyor belt will then rake the payload across the ground, pulling it into a fixed position in the back of the conveyor belt section. From here, everything will be fixed as a second conveyor lifts the payload out of the first and drops it in the awaiting payload section of the rocket. Then the rocket will be sealed using a custom laser cut plywood snap feature to hold the rocket shut. Next, a gas spring will rotate the rocket and launch rail into the appropriate position, placing the motor end in a sealed section of the AGSE to prevent exhaust gas from damaging the sensitive electronics. The motor ignitor will then be inserted in the rocket. Finally, the rocket will launch to 3000 feet! 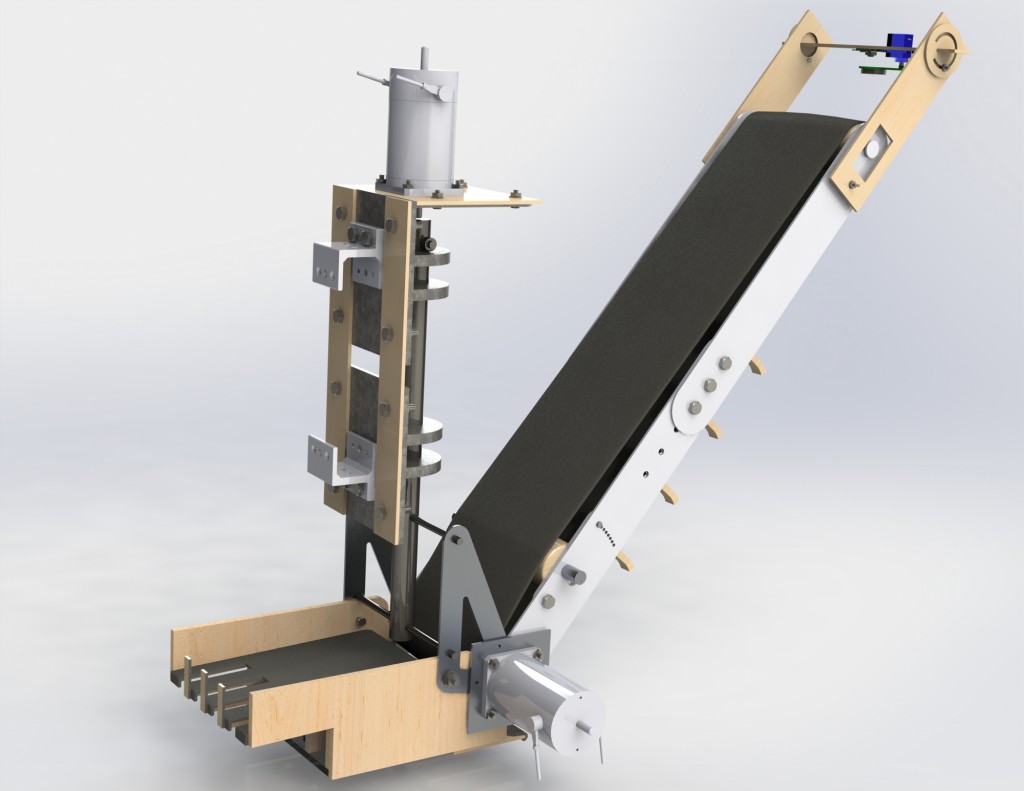 Check out our Documents page to read in more detail about our project.  Each document was created specifically for engineers at NASA who are monitoring our progress.  Here is our latest report, the Critical Design Review: (CDR)

Below is an image taken from our SOLIDWORKS design.  It shows the entire integrated system: 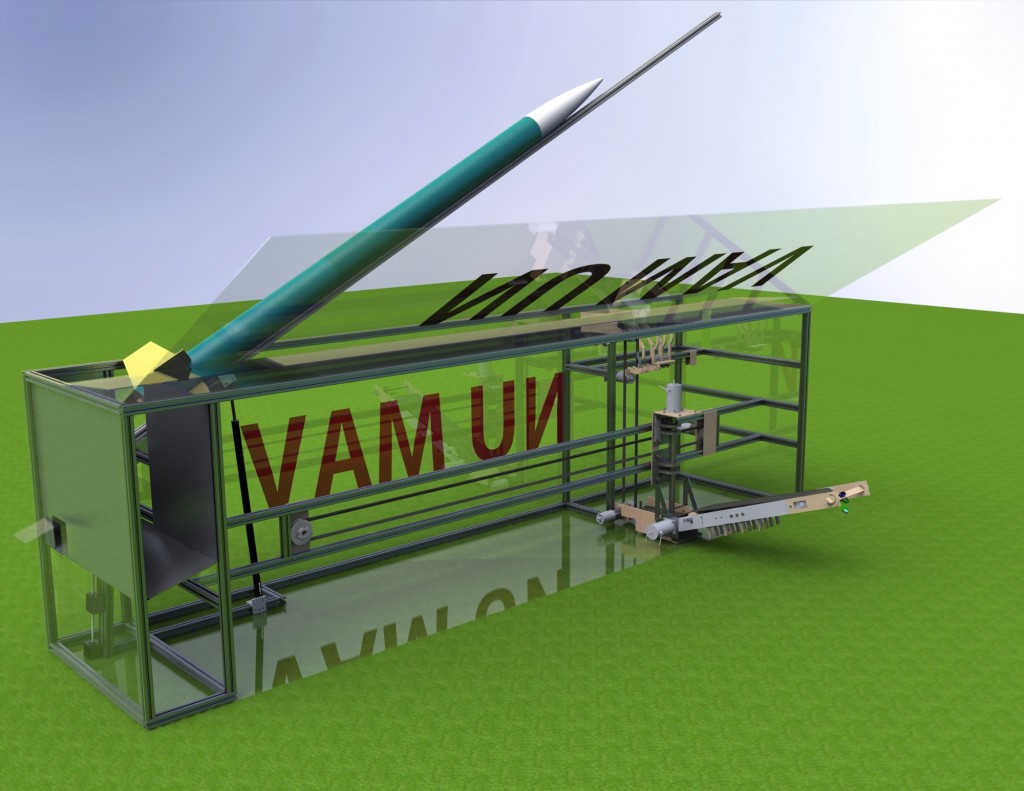 Our full AGSE and rocket design