This project aims to compete in the FOGE Battle of the Rockets Planetary Lander competition. In accordance with competition specifications, this project will develop and design a ‘planetary lander’ that will fit inside a rocket. This rocket will be launched to a minimum of 1000 ft, deploy and land the lander safely. Once on the ground, the lander will upright itself autonomously and use sensors to collect various data. Throughout the launch and for 15 minutes after landing, this data will be sent back in real time to a ground station. 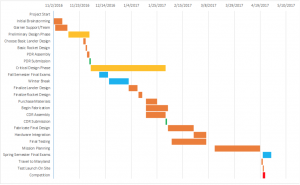