AIAA is currently working on a lighter-than-air vehicle. Think a very small blimp or zeppelin. The goal for this semester is to build a basic airship that uses helium to float and carry a small payload. 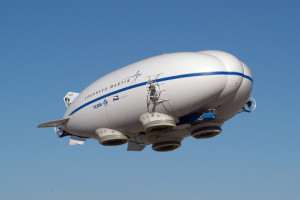 In the upcoming Spring Semester, Airship will implement the choices we made in the Fall Semester. All mechanical systems will be rebuilt using stronger wood. Some form fitting factors will also be introduced. More powerful motors will also be purchased and used to replace the current motors.

A significant amount of time will also be dedicated to tweaking the code being used to provide lift and orientation to the airship. It is difficult to write code for this without seeing it implemented. So, once the subsystems are integrated with the envelope, perfecting the code will be far easier.

Another challenge for the team will be redesigning the envelope. The geometry of the current envelope is not ideal, and as of now, it is unknown whether or not there is enough of the remaining material to rebuild the envelope. The supplier of the film will not be able to supply us with any more film at a reasonable quantity, so research must be done to find a new supplier or a different type of material.

The team believes that, by the end of the semester, we will have a fully functional hybrid airship. We have a much more concrete plan of what needs to be done to get the airship off the ground than we did last semester. We will be able to hit the ground running to implement the plans we have already made.