Fall 2014 saw our second installation of a high-altitude weather balloon project. We gave ourselves a few new goals for the second balloon: reach a peak altitude greater than 100,000 feet, carry an active GPS transmitter for realtime tracking, attach an Inertial Measurement Unit (IMU) to allow us to edit our footage of the Earth using image stabilization, and equip the capsule with an autonomous cut away mechanism in the event of a tree landing. 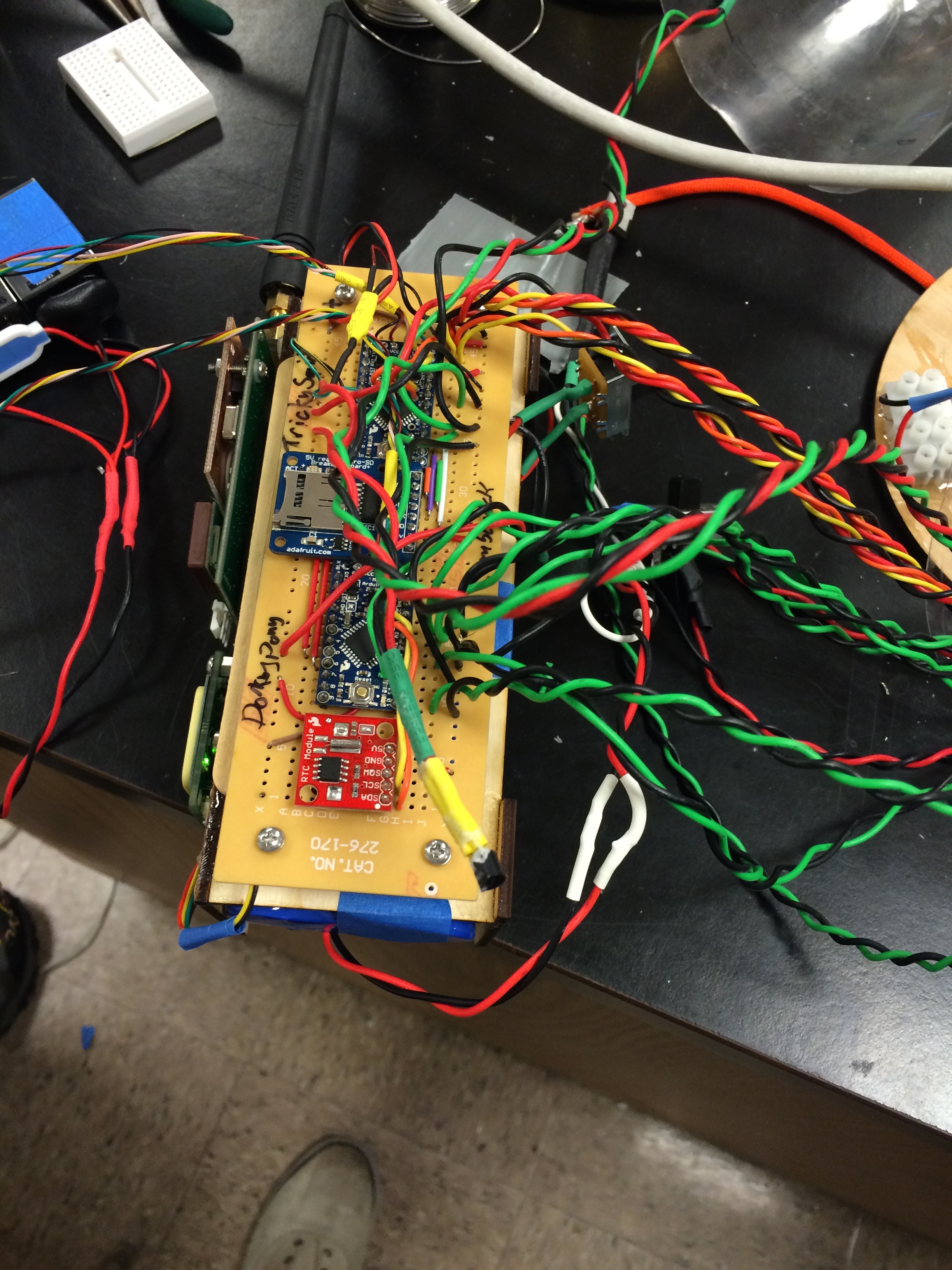 Front Face of the Electronics board – visible are two Arduino Pro Mini’s, a Real Time Clock, and a micro SD breakout board. On the left side are the two GPS units. Underneath is where the batteries were held.

We decided to try a new capsule design. After some initial research, we decided to forgo the Styrofoam structure that we used in the past and attempt a clear plastic design with circular layers for heat trapping and insulation. We corresponded with Bob Bruninga, head of the APRS (Automated Packet Reporting System) website, who provided us with some insight on this technique.  The new capsule takes advantage of solar heating to ensure the electronics remain at an operational temperature.  We placed four thermistors at various layers of the capsule to measure the temperature at each location.  The new technique seemed to work just fine! 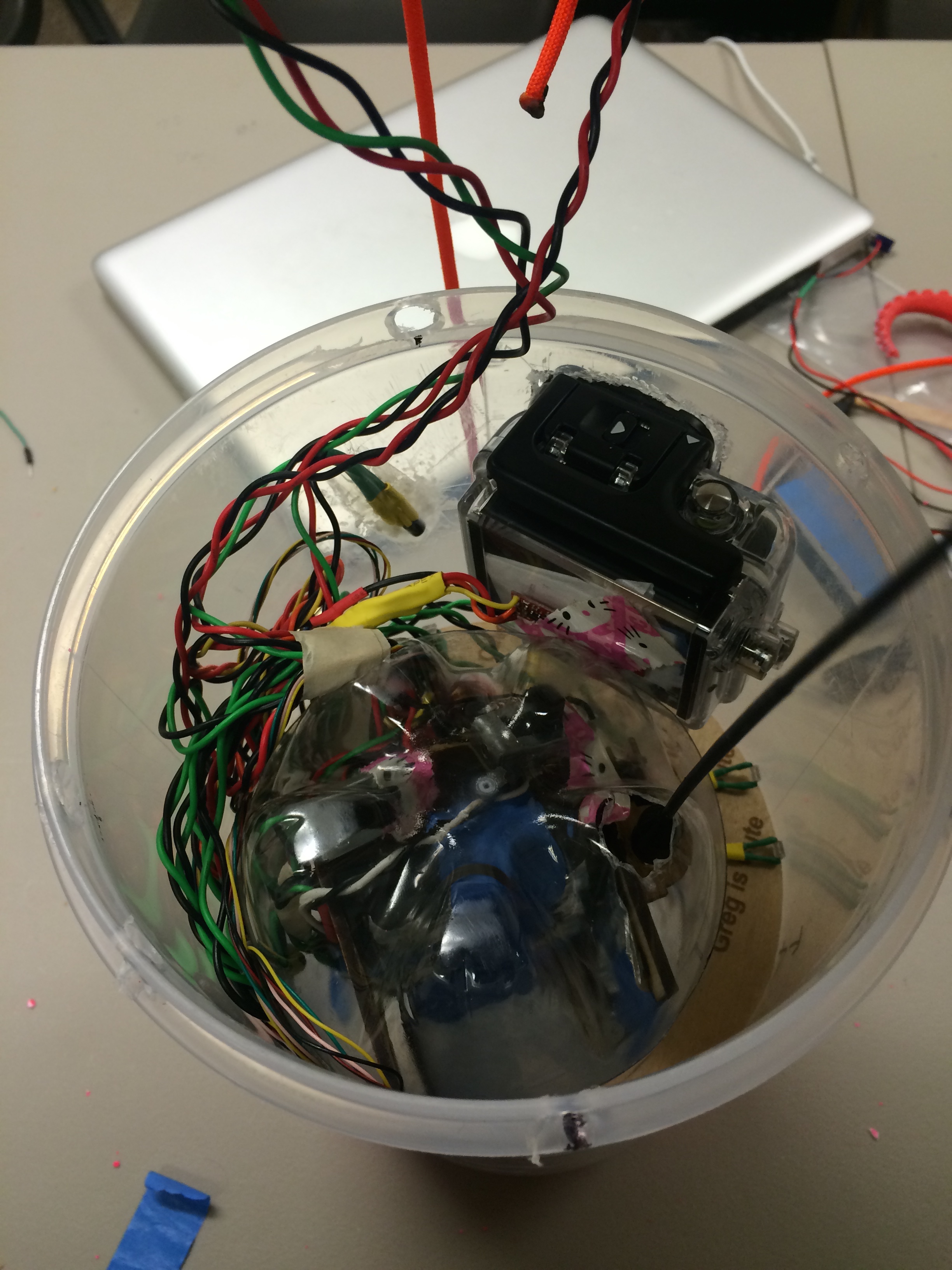 Inside view of the capsule. Two layers are visible: the outer plastic layer and the inner plastic bottle. The electronics were furthered layered with bubble wrap.

Our first weather balloon project ended with a suspended landing in a 60 foot tall oak tree.  It took a few weeks and many failed attempts before we retrieved the balloon. This time around, we learned our lesson. Using a Real Time Clock, we programmed our two Arduino Mini’s to send a high current through a NiChrome wire. The NiChrome would then reach a temperature hot enough to melt the rope that attached the capsule to our balloon.  We made sure the timing was delayed enough that we could get to the landing site before the wire heated up. 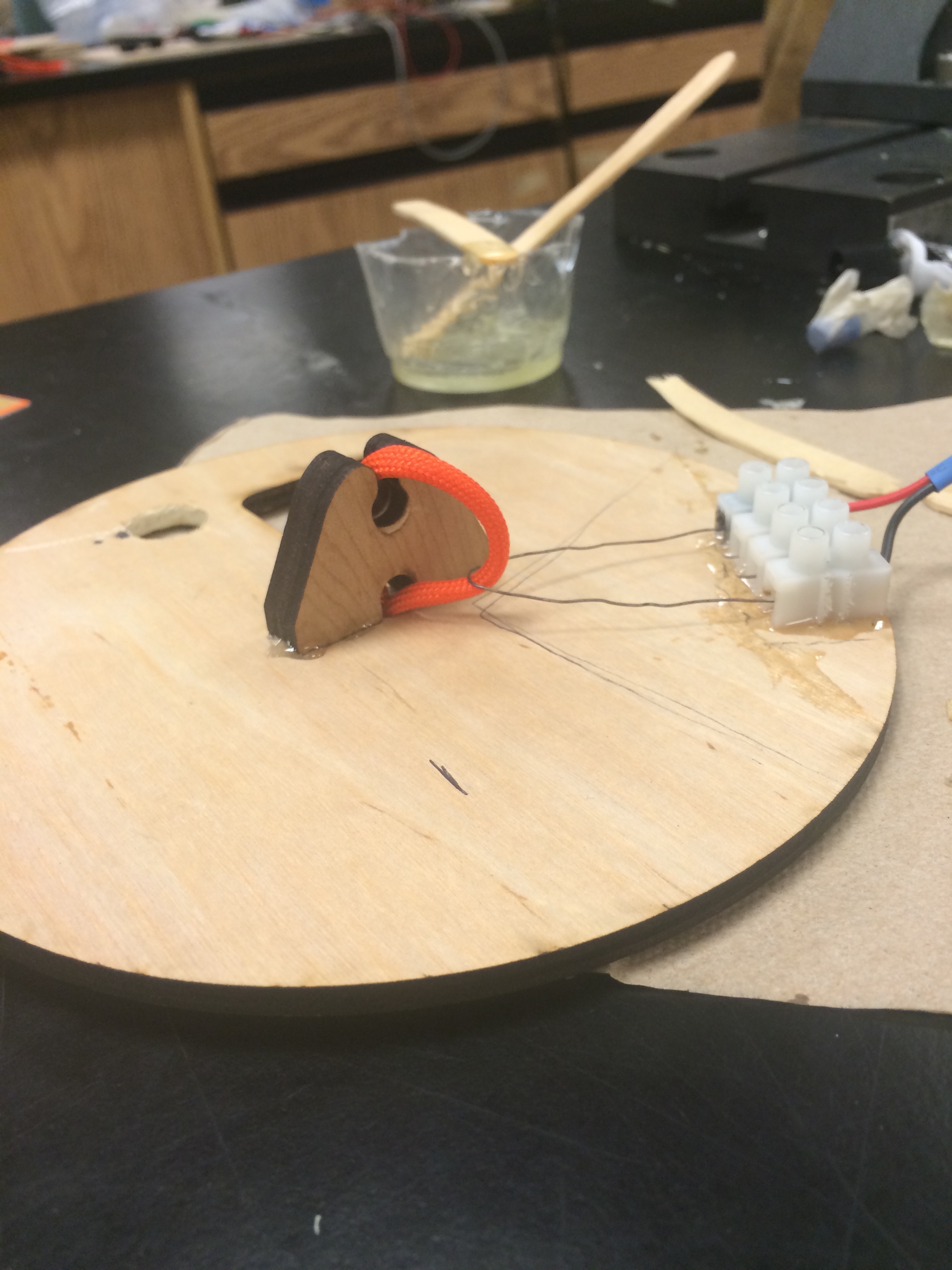 The NiChrome wire was held taut using a small laser cut saddle, which held the rope off the lid.

Unfortunately, this weather ballon saw a different unpleasant ending: the Atlantic Ocean. Using the CUSF trajectory software, we found our projected landing site to be near Worcester, MA (roughly in the middle of Massachusetts). Because of the strong wind currents over Massachusetts, mainly due to the polar jet stream, our launch site had to be in Delmar, NY.  We thought this was a safe choice: far away from the ocean where the strong winds could not impinge on our flight. Our projected and actual paths can be seen below. 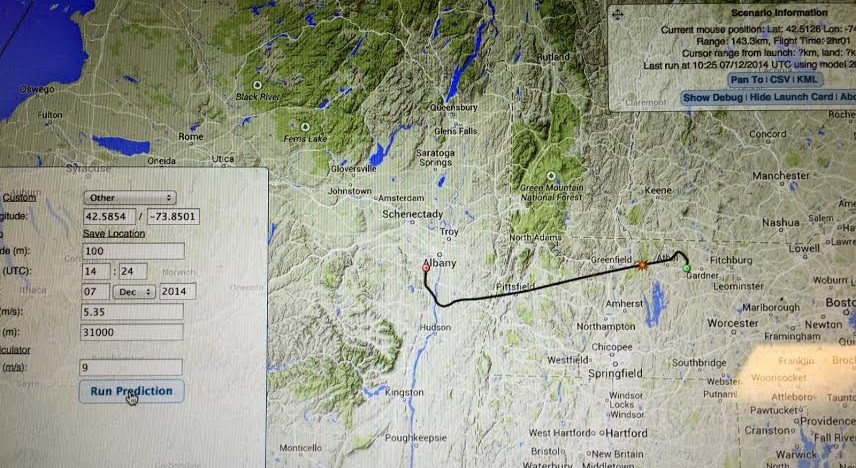 3D plot of our flight path. Each vertical bar represents a data point. Notice they become spread out the capsule approached the ocean.

Splash down occurred 22 miles off the coast of Gloucester, MA. After a few days of post-launch analysis, it was hypothesized that the balloon was not filled with enough helium to achieve the proper ascent rate. The reason for this blunder? The launch team had to work in below freezing temperatures and forgot to let the helium tank acclimate to the temperature change from the car to the outside environment. How could we blame them? They woke up at 6 am to drive to New York and had to launch the ballon in sub freezing temperatures! Next time we know to leave the tank outside for a few minutes, while the launch team warms up in the car. Lesson Learned.