Sometimes, it takes time, patience and most importantly: luck to see a valuable work. That is exactly what my experience about the work Face to Face. 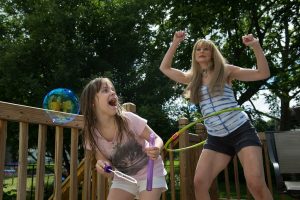 Face to Face was the largest installation and the longest piece in the first floor of Trafalgar Warehouse (the AR house). It almost occupied one third of the inside space and looked like a huge wooden cage. Since it totally blocked out the field of view from the visitors passing by and required 45 minutes to gain a full experience, the work distinguished itself as an unknown territory, enveloped in mystery. There was no way you could miss it. But it took me three days to get the access to it. On the Sunday, those popular slots shut me out. On the Monday, the work met an unpredictable technical issue that asked me to wait for extra hours but still could not get into it. On the Tuesday, which was the last day of the festival, there was one moment I thought I would miss it until the work’s maker, Michaela Holland, told me that I got the priority chance to squeeze into the others’ timetable to finally see it because of yesterday’s trouble. The work created a fence that divided the most isolated space from the world outside among all the works in display and thus allowed the viewers get the most private experience in Michelle Fox’s life.

The first impression was made by a small survey that could reflect your inner personality and revealed your expectation or, more precisely, your imagination about the work. What I picked was a piece of butterfly wings that became a key content in my unique experience afterwards.

Since I was cut into the other’s timetable, in the first room, I had to share the space with another viewer. By seating next to each other, we shared the photo memories from the family. Besides of the album, there were some personal belongings and documents that contained the clues of Michelle’s tragedy. Comparing to the experience that I got through by myself in the rest two rooms, it did prove that “privacy” was the key concept in this immersive experience. In other words, except the volunteers, any heterogenous presence in this work would alter the way you engage in the space and disrupted the presentation of Michelle’s life. Coming into a stranger’s (Michelle’s) living room and rummaging around her possessions reinforced your third person perspective as an outsider or even a snooper. You were allowed to dive into Michelle’s memories, but you could still stay in a psychological comfort zone. The maker intentionally hid the complete story from you so that you would simply focusing on piecing up the story by your own perception. It is fair to say the first room was designed to be an experimental puzzle game. I think what I really appreciated about the first room was that even after you solved the puzzle, the whole story about the tragedy still stayed in vague. The way the maker used to approach the third person perspective was quite subjective and fragmentized. For me, the potential narration was illuminated when I watched the video played at the central TV about Michelle’s bright smile before she got shot. Face to Face was not only about Michelle had to change her natural face to a manmade face but also served as a symbolic clue about what we were going to face. 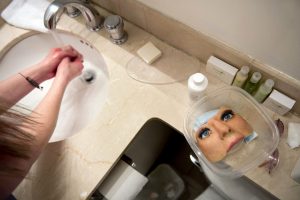 When the volunteer showed me three weird headsets with different human appearances in the second room, I was quite nervous about making the right choice. Even though the volunteer told me they contained the same content, I still felt those headmarks contained the power of metaphors. An ultimate question about identification posted there was: if you could choose what color of skin you have, what would you choose? I chose darkness one and wore it cautiously. Then I was diminished and became the ghost in Michelle’s daily life. Even though you still had no impact on Michelle’s life as a ghost but listening to her talking about her hard time wearing the masks and seeing her actual struggles side by side might change your position as an outsider into an emotional witness. You were dragged into Michelle’s life track and simply got more immersive into the experience. After taking off the headset, I realized the design of headset was full of insights and revealed a painful truth: everyone might need to wear masks for different roles every day, but others might never tell the backside stories. We human are born to understand each other, this is decided by our social attributes, but actually, we always had hard time to understand each other. The volunteer then gave me a photo of me, wearing the heavy black skin headset, standing alone in the center of a bathroom. I am not sure what those masks was based on, but all three headsets were black skin released a certain signal about discrimination or at least a ‘stained glass’ syndrome. Although it could be read from both sides, but I would rather to believe it was out of maker’s good intention to let viewers feel the intension of being an unnatural creature. As a silent and more private space, bathroom was a perfect space for that 360 videos. I believed it was more important than reproducing Michelle’s living environment but defined a foundational platform for various mediums to create echoes.

In the last room— kitchen area, I was so lucky to meet Michelle in the flash. She sat in back of the table with another maker Gabel and greeting me by holding my hands. She asked me some questions about my current situation. I told her I am studying art right now which triggered more light conversations since she also drawn paintings. She told me she already got used to the new life routine but did have one shame was that she cannot see her daughter’s face anymore. She always portrayed her daughter as a young girl since that was the last impression she had before got shot. Asking about what object I picked in the survey, she told me although the butterflies seems fragile, it is said that the flap of a butterfly’s wings in Brazil sets off a tornado in Texas. I was quite surprised about how positive she really was. Although it was hard to tell her feelings by simply looked at her face, her body language showed her energetic and bouncing self. She asked me what my favorite quote was, I said: “Back in China, there was a saying: Girls who loves smiling won’t have a bad luck.” She said: “well, but I have hard time to smile now.” I said: “It is not about face anymore because I can tell that you already smile from deep of your heart.” She was quite moved and asked me to write down the words for her. I silently pressed her hand with tender compassion before I left. It was more than inspiration but the admiration for being an uncompromising human being that I felt. The door closed behind me, then I felt the tears were finally running down my face because I didn’t want to cry in front of her.

To be honest, I did not expect this work would touch me so deeply because I heard a little feedback about this work before I dived into it. After talking to colleges later, I felt I was the only person in the program who got a chance to meet Michelle face to face. I felt most impressive and emotional when I really met Michelle in person. I totally forgot my position as a viewer or an audience but simply had a cheerful conversation with a respectable woman. Unlike the videos, it was not a one-way propagation but a bilateral communication. Based on the mass media research, interpersonal communication can be most effective which was proved by my experience with Michelle. From a living room to a bath room then to a kitchen; from a 2D documentary film to a 360 video than to an oral communication, the spaces in this work varied based on the main medium forms and maximized the impact on the audiences. From third person’s view to first person perspective, the work built up a new special narrative structure and got the audience more engaged. From a shared alternative reality to a private personal experience, the work united the artwork installation with a real human presence and thus created a new artistic model of immersive experience.