Interview: What should we know about “her”

Do we truly know what is going on around us? The astonishing documentary film “A Woman Captured” provided penetrating insights into an ongoing social issue of manipulation. Using only one camera and mainly close-ups for one subject, the film still works like a sharp blade. It splits the skin and presents the hidden disease in the isolated modern society. 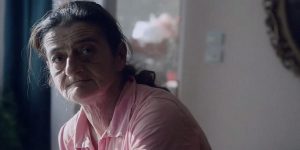 The woman named Marish was kept by a malicious woman Eta as a docile servant and also an exploited contributor to the household income for many years. She had no choice but gave up all the money earned by her twelve-hour shift in a factory and ate the family’s leftover. The cheap hand-made cigarettes were the only reward she could get from the family. Even worse, without any personal freedom, Marish had to endured both verbal and physical abuse for surviving. Fortunately, the horrible life did not ruin her tenacious character and humorous personality which is a great relief to audience.

Thanks to the extremely valuable emotional support from the filmmaker, Marish finally gained the courage to escape from the nightmare and lived a whole new life. It was a great honor for me to “capture” this remarkable woman—Bernadett Tuza-Ritter by listening to her experiences about making this film. 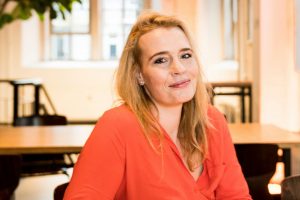 Yangli Liu: Could you introduce yourself and the film for us?

Bernadett Tuza-Ritter: My name is Bernadett Tuza-Ritter. I’m the director for “A Woman Captured”, which is a feature length documentary, that is nominated for the grand jury award here in Sheffield. My film is about modern-day slavery. It’s about a woman who has been kept as a slave for 10 years in Hungary by a Hungarian family. I managed to get access to shoot in that house. During the shooting, she started to trust me and decided to escape. So, I was following her on this journey back to freedom.

Bernadett Tuza-Ritter: Yeah, I just liked to push the boundaries because it’s so exciting to do experiments. I tried to make a cinematic film. I didn’t want to make a film for television, so I started it as an observation for a movie. But during the shooting, as I saw that she wanted to talk to me, I changed my concept a bit. But I still tried to make it in a cinematic way for a cinema.

Yangli Liu: For me, the structure and some certain scenes of your storytelling, especially that high-risk escape, make it feels like a fictional story. When did you realize this film would make itself to such an uplifting ending?

Bernadett Tuza-Ritter: To be honest, I was not sure until it did happen. Because in a documentary film, you never know what will happen in the next moment. On one side, there was the story itself – the storytelling. I always had to check what’s happening around me. So, in my mind, what should be the story always changed. Of course, I was waiting for the escape, but I didn’t know that it would happen or not. And on the other side, there is the visual approach. For me, it was clear from the very beginning: I want to show only one face. I didn’t want to show anyone else, so I mainly shot close up. And if the escape happens, I want to open the frame to feel the freedom, to let you feel what she felt. So, I had these basics. But of course, you need to improvise a lot during making a documentary film.

Yangli Liu: Yes, in the first part of your documentary film, we only see Marish herself. And each time you went into a dining room, the depth of field would be really shallow. Except her, everything was out of focus which I believe needs to be achieved by using camera manually. So, I wonder where did you get educated as a filmmaker?

Bernadett Tuza-Ritter: I was not really educated as a director. I mean this is my first film. This was my first time holding a camera in my hand. What I did in the last 10 years was that I was working as an editor, mainly in fictions, but also in documentaries. I was also a script supervisor. I did continue work in fictions. So, I had the chances to work with the best directors in Hungary. I didn’t study directing from the school, I applied to the film school only when I started this film. I think everything about shooting I learned came from the directors whom I was working with. 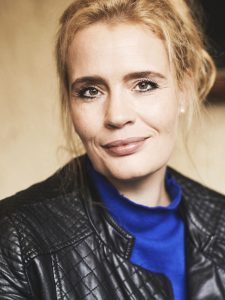 Yangli Liu: Is there any moment that you feel like you have to do something in her (main character’s) life?

Bernadett Tuza-Ritter: Not really, it was very important for me that I should not do anything against her will because she is the one who was not allowed to do what she wants. She didn’t want me to go to the police. She said this is not the way to do it. I wanted to show her that in my company, she can do what she wants. Of course, I was not able to offer her accommodation or a job. I didn’t have the key for that.

In the same time, I knew that if it’s her decision then she might be able to stay free. Because it’s not so easy to start a new life, to stay free and I cannot hold her hand in my whole life. So, it was really important for me that it should be her decision. I decided to be patient and wait for her rhythm to become strong enough.

The only thing what I did was that I tried to support her emotionally: I tried to remind her that she’s a free person. I said to her that she is a lovely person who was born to be free and she could be on her own. From the moment when I started the film, she was not alone anymore. I think that gave her the courage to run away.

Yangli Liu: I remember after the escape, there’s a scene where she bought you a gift. How did you feel at that time?

Bernadett Tuza-Ritter: Yeah, it was lovely. She had a big heart and she was a lovely person. Although the shooting in that house was a nightmare, I really enjoyed my time with her. Our relationship was quite clear for me – we felt love from each other. I asked her at the beginning that she should tell me if she doesn’t want me to film something, then I would just simply put down my camera. It was never more important to make a film than she should feel comfortable with me.

Yangli Liu: Do you mean this relationship more important than the film itself?

Bernadett Tuza-Ritter: Yes, of course. But I mean the film is really important because I felt huge responsibility that I should show this to the world. I knew that having such a success would get the audience close to this huge issue, but they have to understand what’s happening first. So, I need to make the film. But of course, I would have never done the film if she did not agree.

Yangli Liu: When did you feel she was totally open to that?

Bernadett Tuza-Ritter: There was no exactly moment for that. It was done step by step.

Yangli Liu: Then when did she tell you about being a modern slave?

Bernadett Tuza-Ritter: Actually, she told me in the very first day that she was not paid. She was sent to work in a factory, but she had to give her salary to the family. This was the first sign I noticed that something was going wrong there.

I did not ask her questions like that because I felt that she was ashamed to talk about the situation. The main problem is that people usually will blame the victims.

And I believe that is the reason why they don’t ask for help because nobody want to be blamed. And they feel ashamed for that.

I felt that, so I was waiting for her to tell me things. Of course, I didn’t understand something at that time, I tried to raise questions and I tried to focus on what questions the audience might have. But overall, I was very patient and waiting for her while the escape happened only one and a half years after I started to shoot.

Yangli Liu: Then when did you decided that you will use this really strong word: “modern day slavery” to set the tone?

Bernadett Tuza-Ritter: In the last half year, it was already clear that what’s happening. But I think I made my decision during the post production. I remember we had a big debate about this terminology with some colleagues because they told me this is not modern-day slavery and I should not include this word into my synopsis. But I felt that if I cannot use this word then this is not my own film. I knew so clearly that I must raise awareness, and this is exactly what’s happening.

Yangli Liu: Although your film had answered this question at some certain points, I just curious did she tell you why her looking was way much older than her real age?

Bernadett Tuza-Ritter: I never asked because if you ask someone like this, it will hurt. She’s a woman. She wants to be pretty and she wants to think that she’s pretty. There is one moment in the film when I told her: “oh, you aged here a lot”, but I never told her like this. But this was the reason why I wanted to shoot her because I could not forget her face. I saw that all her life is on her face.

Yangli Liu: That was thoughtful, and I really appreciate that you kept some humors in the film so that your audience would not feel overwhelming. Did you made this decision after seeing all the footage?

Bernadett Tuza-Ritter: No, I always wanted to keep that because I think it belongs to her personality. She had a good sense of humor and I think having humor was really important for surviving. So, I always wanted to keep that. It was quite difficult, because in Hungarian, it’s even more funny how she talks. She uses some special words. It was just impossible to translate.

Yangli Liu: You said there were so many people like Eta who manipulated others in the area. Is this phenomenon particularly severe in the Hungary?

Bernadett Tuza-Ritter: There are 45 million people captives by others. So, there must be more than millions of people who behave like Eta. That’s why I’m saying it’s not typical for territory or typical for a country because it depends on people’s personality. There are so many people who can turn to evil if they have power. And if you look around the world, there are evil form everywhere. It doesn’t really matter in which country we are.

Yangli Liu: Is there anything else you want to mention about the film?

Bernadett Tuza-Ritter: Well, I think I mentioned everything I want to because what I try to do is to raise awareness to tell people that they should not blame the victims, that they should open their eyes because it’s happening in our neighborhoods behind a closed door. We don’t know what’s happening behind the next closed door. There is no doubt that the government, the organizations and the police need to solve this problem, but without us, who are living between each other, they would never be able to solve it. So, we all need to take part in it.