I sat down with the three students we had met on our first day in Sheffield: Daniel East, Bethany Giblin, and Barney Thomas. They are from Sheffield Hallam University, and I thought it would be interesting to get their perspective on DocFest, being closer to our angle due to having been student filmmakers. 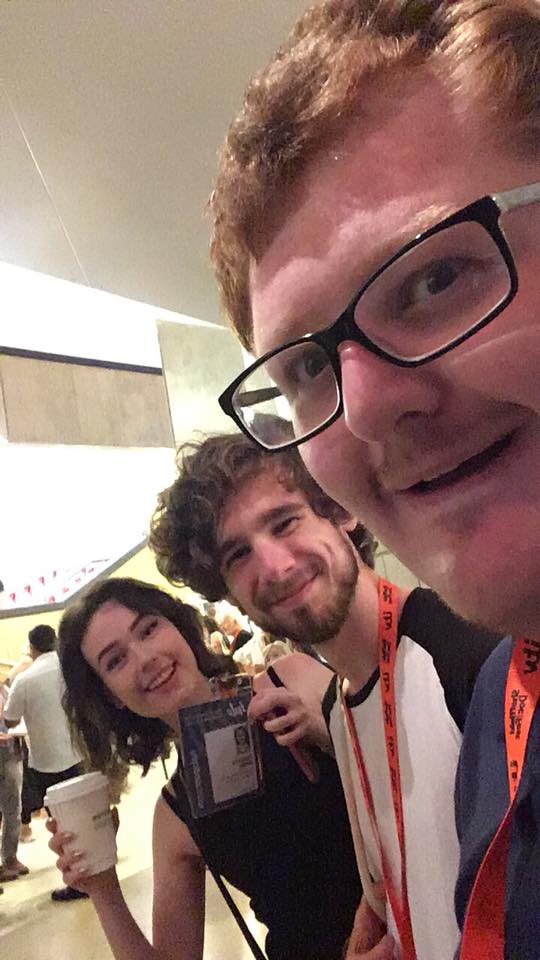 Could each of you please give your names and then briefly describe what you do?

Daniel: I’m Daniel East, also known as danieleast1000 on YouTube. As a student I’ve been helping Beth on her film … I’ve also worked on my own documentary called “Studying Funko Pop”.

Beth: I’m Beth Giblin … This year I’ve been focusing on editing … and directing documentaries. Currently I’m editing a behind-the-scenes featurette which is getting ever-longer, and I just directed a film about disability and that’s gone pretty well. Editing documentaries is more what I specialize in, but I have also directed one or two this year.

Barney: My name is Barnabas Thomas, I’m a director. I work mostly on dramas, but I’ve done a couple of documentaries in the past. Most recently, I’ve been doing composition and sound design on Beth’s documentary.

What’s your experience with DocFest, and what do you really like about it?

Daniel: My previous experience with DocFest, well, it was really the reason I wanted to choose Sheffield Hallam University. When I came to the open day, DocFest was on and I was like “Oh wow, this is really clever,” because it was so close to the university I wanted to go to, and Sheffield Hallam works alongside DocFest … seeing some of the people that attend DocFest and the talks, and in fact my lecturer was quite a big part of the festival to begin with. … In terms of actually being a part of DocFest, this is the first time I’ve been a delegate, previous years I’ve been working as a volunteer … I did camera … I got to help around the festival and do some really cool stuff.

Beth: Like Dan, I have been volunteering for the past two years as a cinema production assistant. Basically, [my job was] making sure everybody and everything was [on] the right screen at the right time. It’s a very highly pressurized role, but I absolutely loved it because it very much links into editing, [since] you’ve basically got to assess if everything on screen looks and sounds correct. … I’ve been working with the projection department and also meeting directors to be sure they’re happy with how their films are being shown. But, this year, like Dan, I’ve actually been given the chance to get a delegate pass … we get to attend the entirety of the festival, go to talks and networking events … This year we’ve actually gotten to relax and enjoy the festival for what it is, instead of being crammed in a tiny, dark room all day.

Barney: At the risk of repeating what we’ve already heard, for the past couple of years I’ve also volunteered at the festival. This year I’m a delegate for the first time. I think, in Sheffield, if you’re interested in media in any kind of way and you’re at the start of your career, then you’re probably volunteering at DocFest. It’s something that everybody tends to do … It’s also a very impressive thing to put on your resume to make connections and stuff like that. …It’s only in the past few years with the free stuff that the festival has reached out to the broader community of Sheffield. … I think it’s a really great thing to do, because not many festivals engage with their community in that way.

What got each of you into film, and what do you like about the documentary format in particular?

Daniel: What got me into film was … numerous things. I started off doing YouTube videos, even before then I was making silly videos with my crappy camera, just making stuff, and I think that’s what’s really inspired me. I started off in college doing film and media production … ended up doing photography … Documentary in particular, I think [it is] a great leaping point. If you’ve got a camera, you can go out and film people, ask them questions and get their thought on things. It’s such an expansive medium, it’s ever evolving. There’s so many things you can do with it. … It’s usually the first to pick up new technologies and do something different with it. … you’re free to experiment and try new things out.

Beth: I guess what made me fall in love with filmmaking and film in general is that I come from a family of filmmakers. My dad is an editor for a TV company, my uncle is an online editor and he does a lot of effects, my granddad got them into it, and all their friends do editing for the industry … I guess I just followed directly in my dad’s footsteps by wanting to become an editor also. … I suppose documentary kind of fell in line with that … I’m not saying that editing a drama is easy, but I feel that editing a documentary is more difficult because you don’t have a script, you can have an outline but the actual film itself comes together in the edit. … Suddenly, when you have a voiceover and have someone commenting on [ordinary footage] … something so bland you would see on the street is transformed into a story. Having that editorial power, I think, is what made me fall in love with documentary. … It’s all about capturing reality and framing it into a fascinating story.

Barney: There are lots of things that got me into film. The turning point … was when I started [the last two years of school], and I was picking what I wanted to do, I saw film studies and thought, “That is the easiest piece of shit [sic] I could do at school for two years … I’ll watch a few films, write some stuff about Die Hard, it’ll be great”. … I spent two years sort of hiding this and realizing that film was actually something that was incredibly difficult, but I loved the challenge of it. I loved taking apart a medium and seeing how you can construct stories visually. … I prefer shooting drama usually, but I’ve learned a lot from making documentaries. … Every shoot you go on, you’ve got to capitalize on these things that could be a hinderance, but if you’ve got a good director you can … capture it and make something better out of it.

What are your plans for the future? Are you going to do more of the same in the field, or branch out more?

Daniel: My plan is to hopefully live and survive, but I’m sure I’ll be able to do it. I’m wanting to do filmmaking in any capacity. Hearing from a lot of people, just be a runner and you’ll kind of fall into what you’re good at. … I like camerawork, and that’s something that I’ll probably pursue, but I’m willing to try anything. … [Working on Beth’s film] was a challenge, but I enjoyed the challenge because I realized, “Oh, I can actually talk to people and get things organized. I’m not as socially inept as I thought I was”. But, I think it’s just seeing what I can fall into and how I can benefit a filmmaker.

Beth: Well, damn, the future. That’s a scary question. Well I mean I’m going to be doing editing regardless. I’m very goal driven, there’s like no other option for me, to be dramatic I guess. …when you’re in film school you’re told “be a runner”, that’s how you get in. I don’t know, I’ve kind of found there are other sneaky ways around it. … At DocFest … it’s like a really brilliant time to network with film producers… You can have one idea for the future, but I suppose it’s about adapting as a filmmaker to what opportunities are presented to you, and if there aren’t any you go out and make some. … Long story short, editing is what I’m going to do, no matter how I have to do it I’m going to do it.

Barney: My plans for the future probably extend to, like, I know what I’m doing tonight, and then after that it’s all a bit of a haze. I know that a lot of people have said “go into the industry as a runner”, … that can really work for people, I’m not disregarding that at all. … But, what I really enjoy is directing, and being very hands on with what I’m doing and making things. I’ve got a YouTube channel called “Misplaced Films” … I’ve been making stuff for that and thinking, “Even if there’s no money in it, I enjoy doing this, and I’m going to try to get it out wherever I can”. I’m not averse to taking work as a runner, or like entry-level jobs, but I want to carry on making my own stuff and seeing what I can do with that.