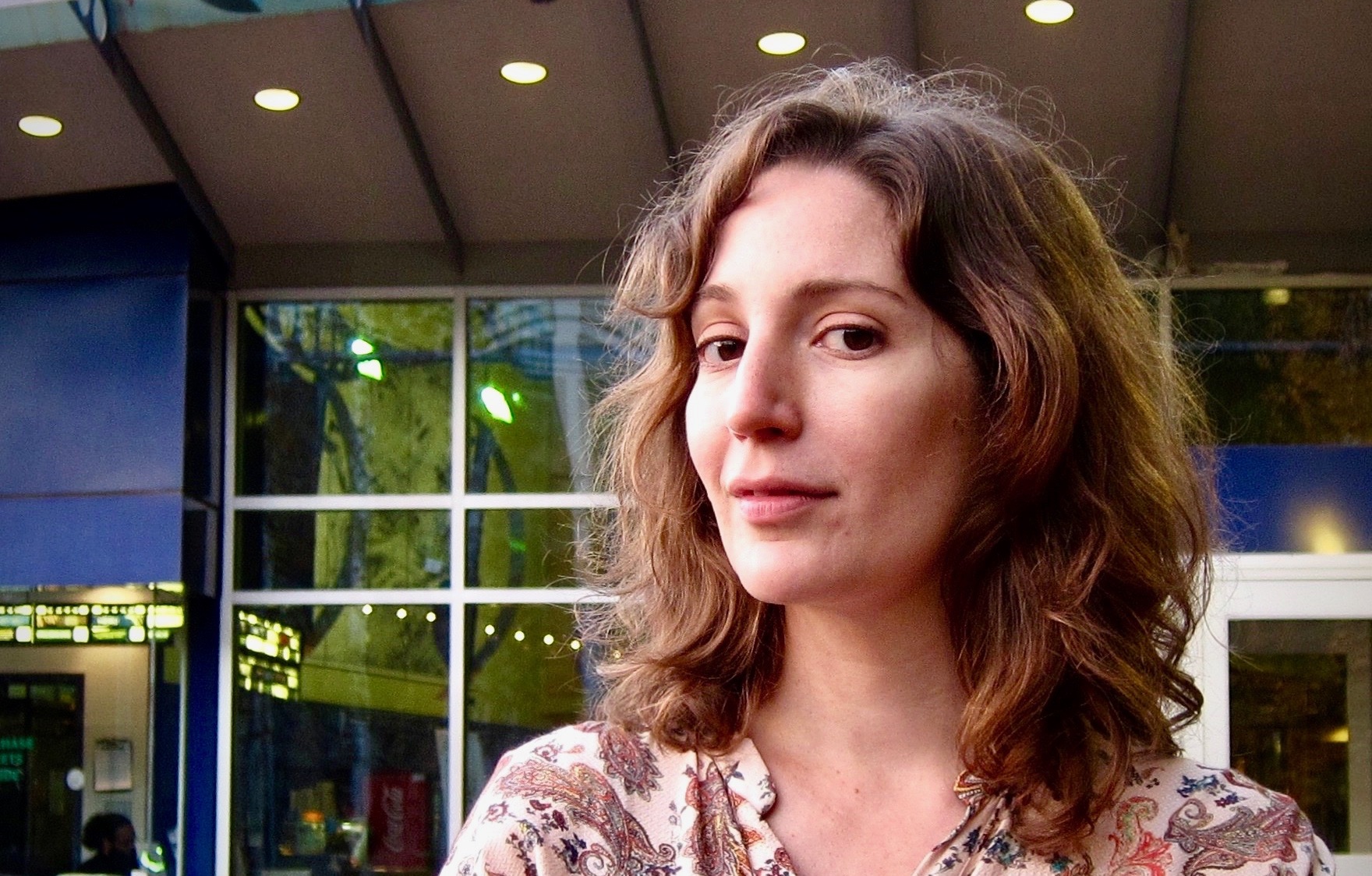 Sandra Rodriguez is the producer of Manic VR, made at Eyesteelfilm. This VR experience takes visitors through the world of Kalina’s, the author’s, siblings from an outside point-of-view as they go through the stages of bipolar disorder. This interview asks for the processes behind making Manic VR and how she met Kalina and her family.

Jason: What made you choose VR in this situation? Why VR?

Sandra: Two sides to this question: I direct and produce a lot of VR or interactive media, so, it’s not a decision to go into VR for this piece in particular. I do think it’s a new tool, a new way to explore, especially in nonfiction.

“Why VR?” It could be any medium. A lot of times when people say why some stories should be made for VR and some others aren’t. I think it’s not very well phrased. You could have a Romeo and Juliet as a play, a novel, or you could have it as a film, animation, VR. It’s the same story. So, I don’t agree to this sentence “some stories don’t work in VR.” It’s just the way you approach a story has to use the affordances of the tool and not “fake it” – not say “I just want it to be VR, so whatever.” In this case, if you wanted to represent the inner world of two people who had bipolar disorder, this [VR] space keeps morphing depending on the stage of the disorder.

Jason: What brought you to VR, having a film background?

Sandra: I do come from documentary filmmaking, but I have a dual life: I’m a director, directing documentaries, but at the same time I’ve pursued a career in academics and I became a PhD of sociology of new media technologies. So, my relationship to technologies is understanding the relationships human beings have with these tools that we have at hand. How we use them, sometimes, not for the purpose that they were built. So, we use them for exploring how to share with others. So, for me, VR was kind of sold as “you can be in anybody’s shoes, you can anywhere, you can really feel like what it’s like to be somebody else”. I don’t think it’s always true, so partly for me it’s using the affordances that this tool promises and see how else you can explore.

Sandra: At Eyesteelfilm I head their digital, interactive or immersive content. Kalina’s film, Manic was produced by and made at Eyesteelfilm. While she was finishing her film, we learned that we had some funds for digital media. She thought maybe VR helps me understand what it feels like for them to have a bipolar disorder. So, the first kind of approach or instinct is to say that “we are her brother or sister” and maybe VR helps us feel what it feels to be them. That’s tricky, because it’s kind of a false promise. You never know how it feels like to be somebody else – you can describe it, but you never know exactly how it feels. Kalina had decided her digital approach would be VR and I was curious why she wanted to do it in VR.

When I saw that it was a good match, we started pushing away from realism and more into “inner worlds”, and that VR is great for. We organized a workshop of 3 days where Kalina and I were there along with a third member who was a 2D animator who works with unconventional materials such as animation made with milk and ink or paint and dishwasher. We asked him to get different takes on how we could talk about manic depression. I had asked Kalina to “bring in something that is really relevant to the storytelling”. So, she brought in polaroids, pictures, and the voice recording. When we heard the voice recording messages, it made our hair stick up. You really hear messages like, “Hello, I’m sorry I’m bored, I’m in the hospital and they won’t let me out for another 3 weeks”. So, you think, “whoa, that is uncannily casual about being in a hospital for 3 weeks”. Then you hear her sister at some point describe how she thinks she’s an angel, “the angels are her new friends” and how there’s an angel that “gave birth to her”. You can hear in the tone of her voice the excitement but also the disconnect from reality. We thought we were holding part of the story here, part of the solution. We’re not pretending we are the sibling. We’re not pretending we’re anyone [else], but, as a guideline, we are Kalina. We’re receiving messages and we’re imagining the world of all of them. So, VR helps in this case.

Jason: What was the biggest challenge in putting it in VR?

Sandra: I would say, because I often work in user experience, the balance in between the interaction and actually listening to the story. Their voiceover is super compelling since it’s not recorded for the experience. At the very beginning, the sound designers didn’t like the voice recording. They commented, “it’s not that clear”, “they could be made clearer” and it’s true, but they are documentary. They are real messages. So, we’re not going to change them. We can tweak them to make them have the same volume, but we’re not going to change the quality or the content of the message. That’s what we’re keeping at core. So, from there, designing around that meant that you want people to hear and focus. If you have too much interaction, we suddenly lose focus from the voiceover. So, I would say the biggest challenge was nailing down the pacing in between moments where you can play and explore and moments where you’re guided in a linear storytelling. I don’t think we fully nailed it. That is the beauty of interactive and immersive media, you can iterate. Here at Sheffield Doc/Fest as a premiere is perfect – as a premiere you can see a lot more people trying it out than “A, B testing”.

Jason: Could you elaborate on this challenge of pacing?

Sandra: The challenge is how far do you stretch [the narrative]. It’s called the elastic effect. The elastic effect is you have a linear narrative – that’s your little line of the elastic – but you allow the user to stretch it. They can play longer or stay in the world, but there’s still a number of steps that they go to and there’s fallback modes where if they stay too long they fall into the next step. So, there is a linear narrative, but within that narrative it can be 11 minutes or 9 minutes. It depends on how you played it.

Jason: Any other big challenges you’d like to mention?

Sandra: Making sure Kalina’s vision is true to herself and respected – that we respect the sibling’s life story and own take on their lives, while the same time working with developers who need to execute things and getting ideas of how you should be moving in and with space was a challenge in it of itself. If somebody is a creative director in interactive and wants to do VR with no background in VR, this step is easier. I think we started off with ideas of a 360° video where you could interact with pills and a horse and I just thought “Wow, how are we going to do that?” It can’t be video. That won’t work, you won’t interact unless it’s gaze tracked.

We started off by making a list of projects that Kalina was watching. In the 3 days of workshop we worked on, we worked on the concept, but also what VR is. So, we [me and the animator] showed her very different pieces of VR and then put her in Google Tilt Brush. Her jaw dropped and stayed in that space forever. So, when she took of this headset she said, “OK, this is what we’re going for in the experience”. We want people to just go “oh, oh look, oh look this makes music, look, I can move in this space… Well, I want to explore this”. We did not want to be scripted to as “go right”, “please follow the arrow to the next step”, or “please look left or right and you’ll see a circle that brings you to another scene”. We wanted to be super intuitive. Things like swarm’s effect is gaze tracked, so, you are destroying the world around you. A lot of people didn’t pick up on that, so that’s one of the UX that we should tweak a little, so you really feel you’re the one destroying the world. Everyone understands the swarm destroys the world, so wherever you look, you’re destroying the world. So, little tweaks like this that could be made more powerful.

Jason: How was meeting Kalina and her family?

Sandra: Meeting her was not difficult at all because we have editing suites. She was editing films there, so I got to hear about her movie and see the editing process. I even gave her some comments and feedback on the film [Manic the movie] itself because I work in film as well. Eyesteelfilm sees itself like a family, so, we’re in the same family. 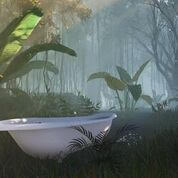 A still from Manic VR. Provided by Sandra Rodriguez, used with permission.

Meeting her siblings was really particular, especially when she showed them the VR piece. Her sister saw bits and parts of it throughout the experience. Her brother had a rougher time while we were finishing the experience – he was hospitalized. So, for a while she [Kalina] wouldn’t even reach out to him for feedback. It was too complicated. I think she sent me a video right before we arrived at Sheffield of showing the experience to her brother. It’s just beautiful because he has just this huge smile on his face. It’s a great way to see the family react here. He wouldn’t remember a lot of these messages, but that’s partly why he leaves these messages. He felt that it was more representative of how he felt, even fun, which means a lot for me. He doesn’t want people to pity what he feels or sees or imagines, so the fact that it was fun for him was a plus. Meeting the family was kind of understanding who was behind the voices you hear, but we knew them better than they knew us. It’s beautiful, but it’s awkward for them. We know everything about them, but they don’t remember most of it.

Follow Sandra, Kalina and the people of Eyesteelfilm at http://www.eyesteelfilm.com/web-projects/manic-vr/