Camila Ruz Renjifo is the creator behind Is Anna Ok?, a two-headset VR piece depicting the story of two identical twin sisters who go through a traumatic experience that alters their lives forever. Camila speaks about her process behind the piece, what she wants to change going forward from Doc/Fest, and what she considers essential when creating VR experiences. 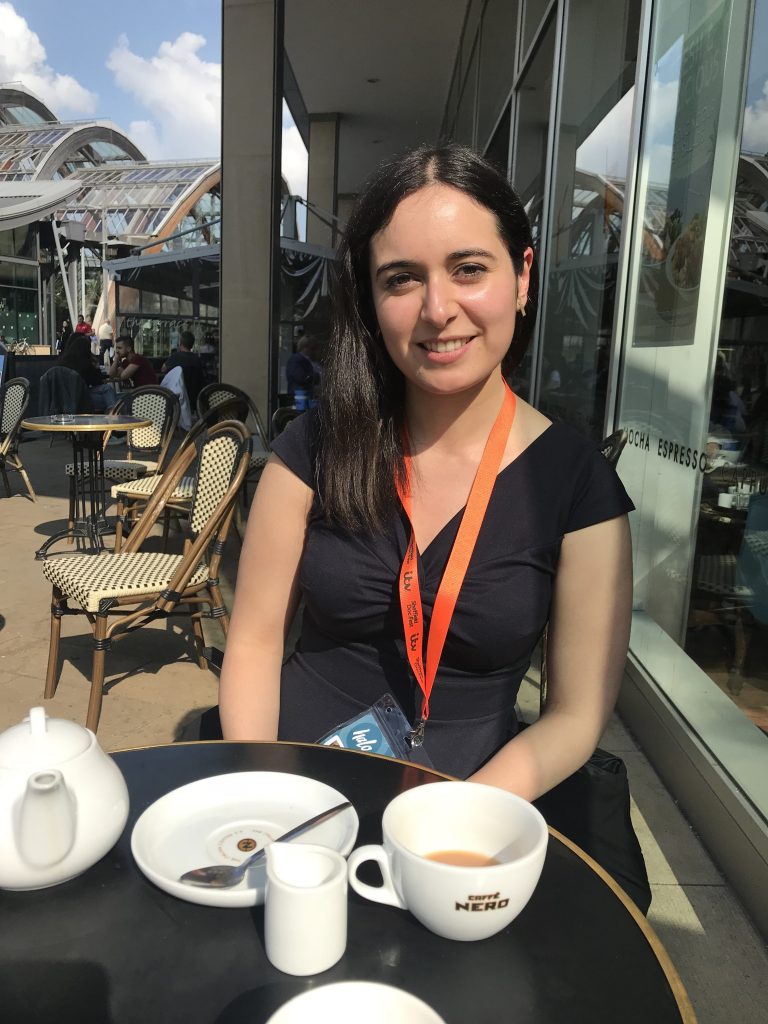 Why did you decide to present this story as two seperate headset stories?

When we started doing this, we knew we wanted to do something about mental health. I was going through all kinds of stories, talking to lots of different contributors–people who we might be able to do something about. I came across these twins, Anna and Lauren. Originally, the idea was just going to be talking to Anna and getting her experience. When I started talking to her, I started seeing how big her memory loss was and I realized there wasn’t enough. You weren’t going to get the whole story from just Anna.

Lauren is essentially caring for Anna and they have are [very close]; it wouldn’t be fair and it wouldn’t be an accurate representation of the story if you just choose one of them. You can only get the truth by both. I think that Lauren gets left out quite a lot because she cares for Anna, but not many people ask her how she’s doing, what her experience of what happened is like. We thought we might be able to balance that out a bit by telling both stories.

[We also thought] it would be really interesting to try and do an experience where you leave some questions unanswered in the stories. You have to do the experiences together and you can only work it out either by doing both or by talking to each other. We knew we wanted to do a live experience version of this and we just wanted to make it feel fully interactive in the space. At Doc/Fest, we thought it would be great if we could get two strangers to do it together, talk about it afterwards, and maybe make a connection in that way.

I learned in class the importance of extension when designing an experience and the post-experience discussion that occurred between Emily and I after we viewed the piece together greatly enhanced how we felt about it afterwards. How else does Is Anna Ok? provide extension?

The letters [from Anna and Lauren that are handed to you after the experience ends] were another way we were thinking to do that. I think people like having something to hold that’s physical, even if you’re doing a virtual reality experience. It’s something that you would open after the experience has ended. It would make you feel like you were very personally being addressed by one of the characters in a way that you kind of feel that it happened to you, that you really are the sister.

VR can actually be quite isolating. When we watch TV or a film, we tend to do it [with others]. We’re used to chatting about our visual narrative experiences together, but VR is something that you very much do on your own. You’re seeing a story that’s happening to you, but you can’t turn around and see a friend there and be like “Oh my gosh, look! This bit’s crazy!” We wanted to write that into the experience so you get that opportunity and feel that it’s a bit more social.

I liked how picking up and interacting with objects in the experience actually added narrative to the story and wasn’t just for visual effect. Can you tell me more about that?

One of the things we really wanted to make sure was that things were there in the story to further the story. The story came first. We didn’t just want to have a cool bit that didn’t do anything story-wise. Some people come into a VR experience really comfortable with what they’re doing–they’ve done a million before, they know exactly how to use a controller, and they really want to interact. And then you get some people who just want to sit there passively and watch something. They are okay with being put a little bit out of their comfort zone, but they’re too scared to do too much. The way we balance that out is by trying to reward people for exploring a bit more, but in a way that hopefully allows them to do it at their own pace. You can pick up one object and you’ll get something extra, but you don’t have to. The object is on a timer, so [the story will] continue without it. If you miss out on the object, you might miss some juicy details, but you will still get the story overall.

It was also [due to subject matter] because Anna’s and Lauren’s stories are rather complicated. These are real people and it has to be accurate. VR is a very complicated medium that is not necessarily very sophisticated right now. It’s hard to tell such a deep story that happened over quite a long time in ten minutes. We had to leave some things out of the main storyline, but some of the things were so important that we wanted to emphasize them again, [for example],  Anna’s memory loss. We thought we made it clear, but we thought maybe maybe not, so we [decided to include it] in another audio object. It’s so important to Anna[‘s story], and if someone doesn’t get that, then they really haven’t understood the story. It would be really inaccurate and it wouldn’t be doing justice to Anna’s experience. 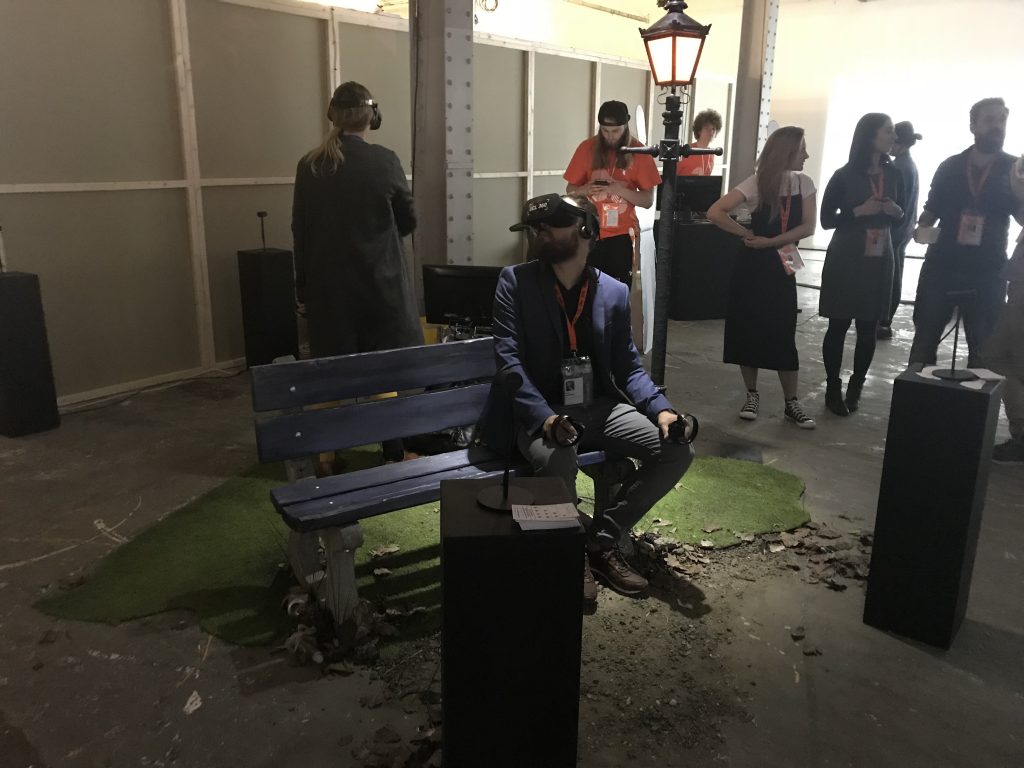 What do you plan on doing with “Is Anna Ok?” after Doc/Fest?

This is kind of like a beta test. It’s almost finished, but we’ve got about another month, and we’re going to take all the user testing that we’ve done during this festival [and implement it]. I think [an important part of creating] VR is that you really do need to test it on people who don’t really do VR. You can test it with your friends, people in your office, but that’s not going to be helpful.

You have to do really good user testing. We did quite a lot of it to get to this stage, but you always learn more. As soon as you do a live experience, you’re like “Mhm, okay we need to do this, we can change this, we’ve got to tweak this…” We got a month more of that before we release it on the Oculus store and it’s available for download. My team, BBC Stories, [tries to] aim for an audience that is under 35 [years old] and mostly women. This was done with that audience in mind. It’s not typical that [all of our targeted] audience is gonna own an Oculus headset, so we’re planning to work with hospitals, the NHS (who owns Oculus headsets in lots of hospitals), and Headway (a brain injury charity). We don’t just want to show it at festivals where you need to pay £400 to get a ticket. We want it to actually reach people, so that’s the next plan: working out a series of tours where we can actually show it to the audience.

If you ever do VR, you will know that [what happens is] you’ll see all the things that are wrong with it [as soon as] you finish and you’re like “AH!” But we’ve got about another month, and we’re going to take all the user testing that we’ve done during this festival [and implement it]. One of the things we’ve been wanting to do for ages is make it much more obvious that when Anna hands you the photo, you are [taking on her role in the story]. Right now, you do become solid, but we want to make it much more gradual. You’ll be able to see the color slowly leeching away from her and into you, and hopefully this will make it really freaking clear what it is that’s going on! Hopefully, that will also give you a reason for being in the story, as in, “I really didn’t have hands or a body, and now she gave me something, and now I have it.”

We also want to use bone-conducting headphones. They have something that rests here (points at area right outside ear) over the bone of your ear and something that goes inside. You can have audio that sounds like it’s like its inside your mind and audio thats coming just normal from your surroundings. If you have a character speaking in your mind voice, it sounds like they’re really, really close.

What it’s like doing a live showing compared to not being able to facilitate the setting in which your user is experiencing the story (i.e. the bench and street lamp setting at Trafalgar)?

Something to think of is how important the set is for a live experience VR. Yes, you can have something for the people who want to download it at home, but if you are planning to release it in festivals, then you’re doing theater really. You need to think about how the ambience is. Does it feel welcoming? Is someone actually going to want to do it? A lot of VR pieces are quite traumatic subjects and can be quite hard hitting. I think that you can do really hard hitting subjects in a way that is still enjoyable. You’re asking so much of somebody to “please, come sit on my incredibly uncomfortable VR experience, put on a really weird outfit, have a horrible thing happen to you, and then go?!” I mean why would I sign up for that?! You have to keep the audience in mind. It is a privilege that somebody is taking the time out of their busy lives to listen, read, view, or experience one of the stories that you have created. Your [responsibility is to] make sure they have a good time while it’s happening.