Porton Down, a virtual reality exhibit created by Don Webb, Callum Cooper, Sam Von Ehren, and Anna Meller, is a story of an ex-serviceman that was experimented on during a time of war. Before the virtual reality experience, there are some drawings that the soldier drew during his experiment. He was given a strong dose of LSD, but he was not aware that he had taken it. 20 minutes after he had taken the drug he was not feeling the effect at all. He drew a normal photo of a man’s face. However, as the drug’s effects began, the drawings became more and more abstract. At the drug’s peak, the face became just a bunch of squiggles on the page. Once you put the headset on, you are introduced to the story of how the soldier found himself in that position. He had been chosen as a volunteer to participate in some tests. The scientists were very vague as to what they were going to do to him, but he was told to ingest some type of fluids. Then, you take over as the body of the soldier and is asked to participate in some tests to measure reaction time. You are meant to hit a button as soon as you hear a noise and then there are some other trials that follow. As time passed, the room starts to warp and the hands you’re controlling start growing and shrinking. The walls start to melt and you are asked to continue to participate in the trials. You press the button and the scientists say your reaction time was 10 seconds, when you clearly did no take that long to react. This means that the drug is also altering your perception of time. After the trial is over, you are presented with some facts about the real soldier. He ended up taking part in a class action lawsuit several decades later. He received 6,000 pounds in compensation, which is nothing considering the mental damage it caused him.

Porton down has a great visual component. There are no controllers, so the cameras keep track of your hand movements and you see your own hands in the VR headset. This allows for a much more immersive experience because your real life movements affect the visuals. The drug effects are very disorienting, but that truly emphasizes how damaging of an experience the trials were. It must have been terrifying considering they gave him no context as to what he was going to be subjected to.

The aural aspect was also well done. The scientists in the lab talk to you like you’re the test subject. You are confused as to what is going on and as the drug hits their voices change. This is mixed with narration from the soldier that was a part of these studies. This makes for a unique story that feels very personal.

The participant has to be willing to interact. They have to fully invest in the process in order to understand the effects of the drug and to feel what I like to call the “huh?” moment. That occurs during the reaction time being 10 seconds. If the participant doesn’t focus on their previous results, then they will miss that moment and the experience won’t be as impactful. 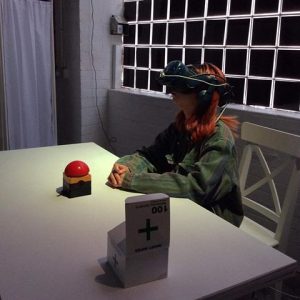 The red button is used in the game to measure your reaction time. The participant hears a noise and then has to press it.

I believe the intention behind Porton Down was to highlight how terrible these experiments were. When we think of scientists and doctors, we think that they should be completely honest at all times. They have a lot of power and can impact people in terrible ways if they aren’t truthful. The soldier should have been given the option to take the drug, or the doctors should have at least told him what was to be expected. This piece also showed the bravery of soldiers. Not only are these people putting their lives on the line, but the unlucky ones are subject to these terrifying trials. Porton Down shined a light on a terrible crime in order to make sure that history does not repeat itself. 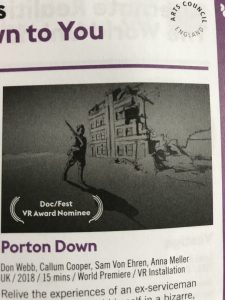 This is one of the first images you see in the VR headset. War is deadly.

Overall, Porton Down was phenomenal artistic success. It kept the viewer engaged throughout the entire process. The soldier’s narration made it feel like a very personal story and it gets the viewer invested as to what really happened in Porton Down. The visuals that accompany the narration sets the scene even better. Once you enter the body of the soldier as a patient in the scientific trials, you feel like you are the soldier. I felt completely immersed with the scientists standing behind glass windows asking me questions as the drugs kicked in. The melting walls and morphing hands made it that much more terrifying. I couldn’t even begin to imagine how I would react if that same thing happened to me. Porton Down was a horrible crime committed on unknowing soldiers and this exhibit exemplified that fact beautifully.