The Loss Levels by Dan Hett may look like a classic arcade game at first, but in reality, it reveals the emotions of Dan about his brother’s death in a tragic terrorist attack. The experience takes the player through a series of short arcade games, each lasting no more than a minute. Players complete simple tasks like getting to a door, opening a bunch of closets, etc. All of these scenes have to do with the death of Martyn Hett, Dan’s brother, showing some very clear representations with scenes of Martyn’s ashes and of the player helping carry a coffin. Some scenes that might seem perfectly normal for an arcade game take on a whole new meaning in this setting. The entire game is played with a joystick and 2 buttons, one of which doesn’t even work. This mimics the state of many classic arcade machines today, while also a subtle nod to the fact that there were two brothers, Dan and Martyn. As only one of the buttons works, only one of the brothers is still alive. This machine shows a story of loss with an 8-bit theme in a unique way at Doc Fest It is one of the only installations that did not feature AR or VR, but immersed the user the old fashioned way with a controller. 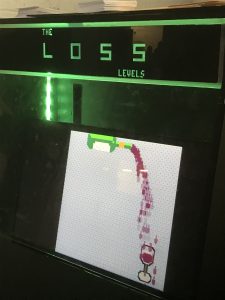 Picture taken by me in Trafalgar Warehouse

Without AR or VR, the work was pretty much entirely visual, with a few sound effects from the machine. It took a bit of a different approach than other projects, where instead of trying to make the user feel like they are in an alternate reality, it relies on simple visuals and the emotions of Dan Hett so that the player can feel like they are walking in his shoes. Even though the piece does not last very long, it is long enough for the user to understand the purpose and short enough that it doesn’t drag on too long. Another unique detail of this project is the 8-bit take on a heavy topic. It creates an interesting dynamic where the player can still definitely feel the tragedy and loss of Hett, but at the same time travel through an 8-bit world, which in nature is very simple in concept. In a way, it can be a bit of a distraction due to the contrast from the message. If a user goes into The Loss Levels and only thinks of it as an 8-bit arcade experience, they will likely miss a lot of the points here. However, it can also be argued that a layer of simplicity can prevent a story from having a more vague message. Whether the images were 1080p or 8-bit, the actions that the player takes in the story are very clear, and given the name, The Loss Levels is clear enough on its message for a majority of users to understand its purpose. One other detail to note is that the subtle use of text adds a lot to the story. Messages along the lines of “but no one answered” make the piece more eerie and give it depth that a text less arcade game would not have. This, paired with the imagery, adds a subtle layer of depth beyond this 8-bit coat of paint. 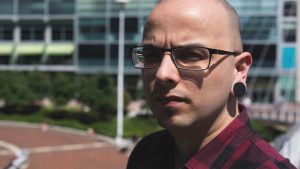 Picture found from an article about Dan Hett here https://www.bigissuenorth.com/features/2017/12/games-of-the-arena/

I first tried out The Loss Levels among a few other projects at Trafalgar Warehouse. I had only seen the name of the piece in festival programs, and knew nothing about this project going into it. I saw a classic arcade game and jumped in. Given this lack of knowledge, I could tell that there was something dark about the story, with the coffin, news reports, and people running after me as obvious signs, but the project felt incomplete on my initial viewing. Without hearing the true story, I saw an arcade game with multiple physics errors and almost nonexistent gameplay, and I shrugged it off as nothing important. However, Dan Hett appeared at the Alternative Realities Summit as one of the speakers on a small panel to talk about his project. After hearing about the real story behind the project, it didn’t hit me as a huge surprise, but I definitely felt that a few lingering details clicked and that the project started to make much more sense. The death was very clear when playing through The Loss Levels, but that bit of background knowledge that it was the creator’s brother was not as clear. After listening to this story, certain details made more sense because they led to family, which is the “loss” here. Overall, the arcade game theme gave off a weird effect for me when I played this, and it was a bit of a distraction that was fueled by the lack of context I happened to have when I saw this.

Given this information, I cannot say that The Loss Levels is an awful project just because my lack of context led me astray. However, given that this did happen, I also cannot call it a masterpiece. The message is definitely there, and the motivation for the project is inspiring. However, an arcade game might not have been the best demonstration for this message. It definitely has its pros, in that graphics are easy to make without looking awful and it attracts people with a similar look to something they know. However, a narrative this deep would be better supported in a different format. If most of these visuals were used in a VR installation, it would have been a completely different experience. Alternatively, making a traditional film could also accomplish the same goal, however that would create less immersion. The combination of narrative and format is a strange mesh in this project, and creates for a sub-par experience in the end that can leave some viewers with questions.