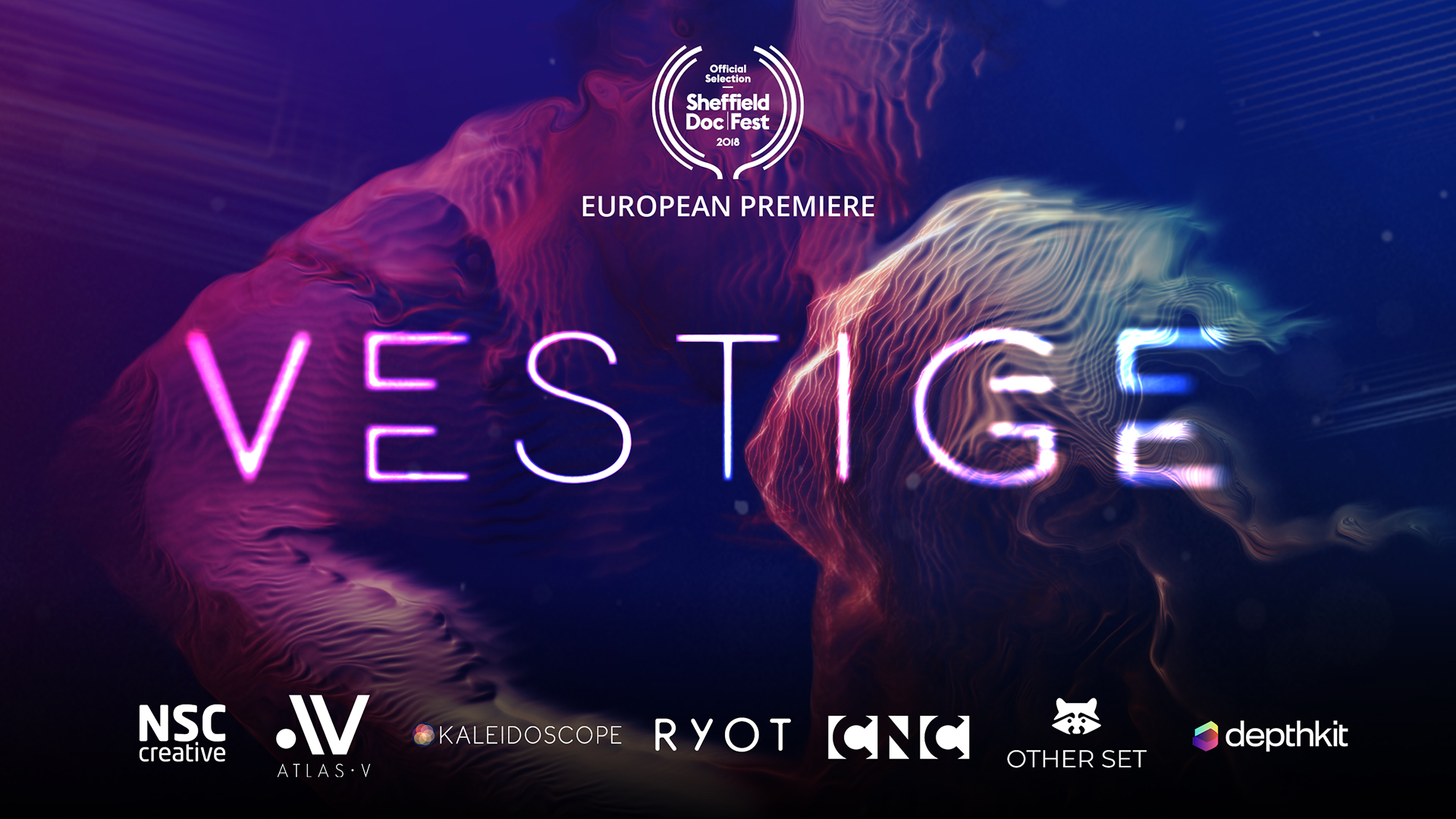 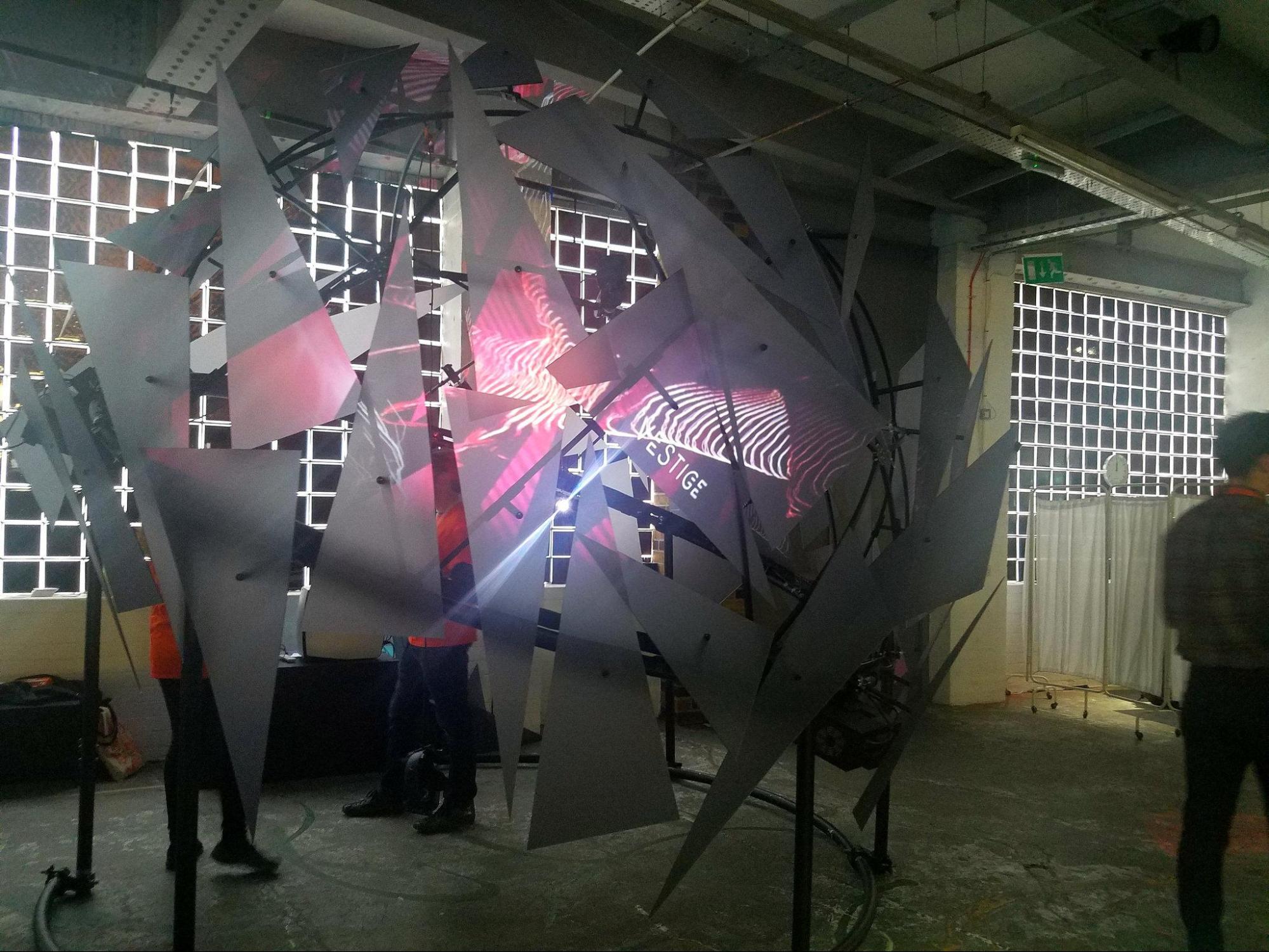 Picture of the physical installation, by me

Vestige is a VR experience of the story of Lisa Elin losing the one she loved, Erik Craighead. It was created by Aaron Bradbury (director) and Paul Mowbray (Producer).

I enter a large, circular installation that looks like fragments (pictured). Then, I put on a headset that has a wire that trails to the top of the installation, allowing full rotation without tripping over wires. Once the headset is adjusted, I see a title screen and is instructed to look at the word “VESTIGE” to start the experience.

The experience starts with the ring of a phone call. When answered, Lisa appears in a linear, holographic style (pictured below).

She tells the story of how Erik was wild, but a great person and how they loved each other. During the story, similar-styled visions appear in sync with the voiceover. She talks about hating the hospital and her “hologram” stretches and contorts every time she repeats it. Near the end, the hologram of Erik is seen in a hospital bed. He shatters. The final scene talks about how one should live in the moment. The credits are presented in shards, much like the physical installation. 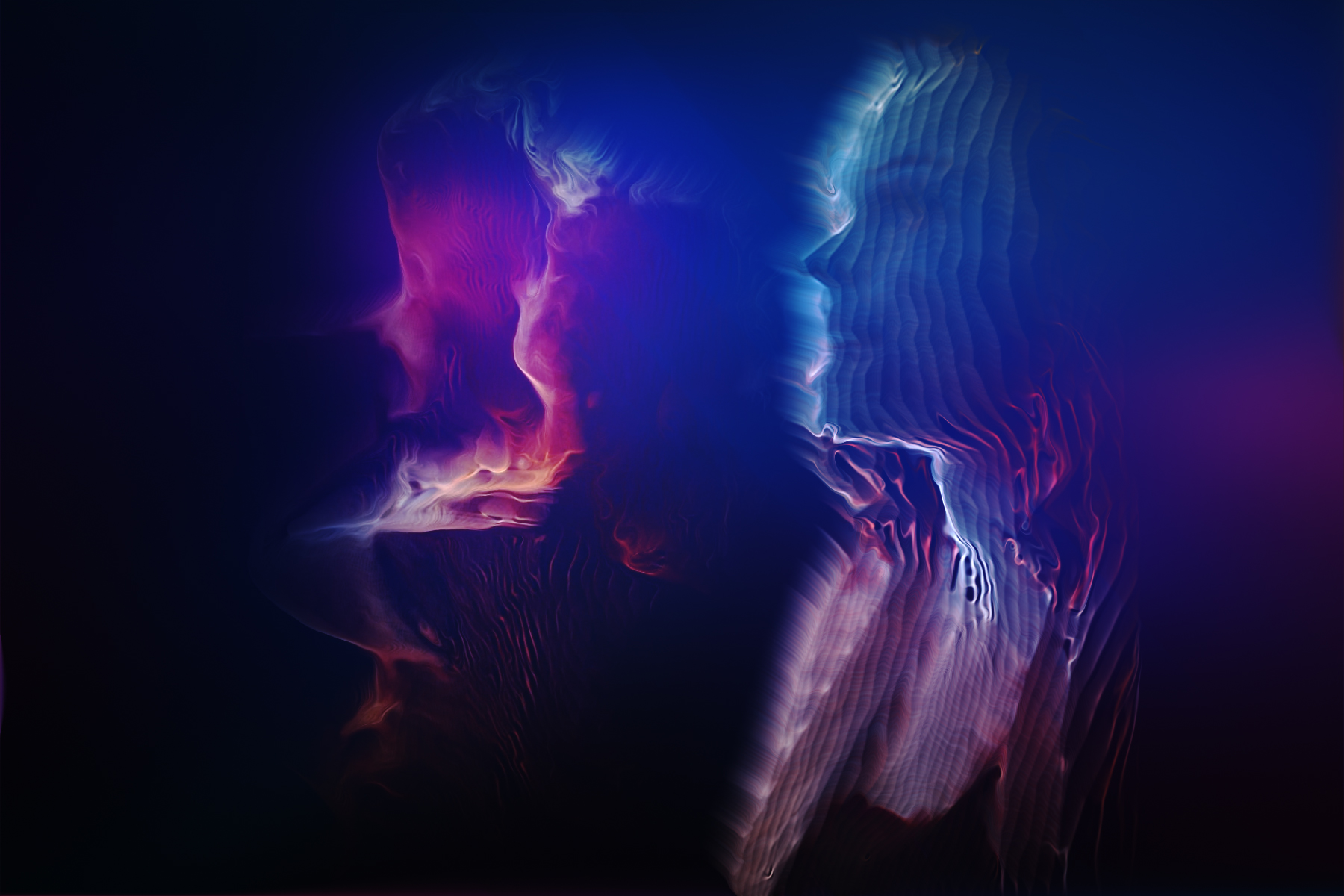 Initially, I was very curious about the sharp, shard-like installation they had. I was expecting something game-y and along the lines of sci-fi (think Tron). But then I got to meet the producer and director at their talk. So, going into the experience, I already knew that there will be a theme of loss. I went in expecting I was going to get my heart torn from me. Going in, and hearing that first phone call, and Lisa was asked who Erik was instead of is I was already melancholy.

My heart broke as Erik broke. I really wanted to cry at that point. Heck, thinking about it now makes me want to cry. My eyes were wet when they inevitably took the headset away from me. Seeing their physical installation at that moment just kept that feeling with me. The “broken” parts of the installation was Erik and it brings me back to that scene when I pass by it. In all of honesty, the font and the style of the piece being projected onto the installation detracts it a little for me, since I still have a brief moment of “is this a Sci-Fi piece?” when I glance at the installation, before I recognize it.

I believe the work is very poetic. There is no better graphics in this than just the “holograms” (pictured above). The colors of the holograms seemed to correspond more with feeling rather than realism. Instead of trying to explain every single detail, the piece personified who Erik was overall through the eyes of Lisa before taking him away from her (and all the viewers).

Also, I believe the interface (or lack thereof) is a mix of practical and expressive (before continuing, I say the interface is any menus within the experience, not the Vive itself). There is barely any noticable interface within the experience, other than staring at “VESTIGE” to start it. There is, however, a more hidden interface: gazing at a certain scene or being in certain areas would trigger a certain narrative path to begin. This interface is practical in the sense that it makes a tailored experience without the user knowing. It is expressive because the user does not need to know about it and it is never blatantly written out.

With the limitations placed on current VR experiences, I believe the team behind Vestige used very effective design choices and techniques in creating their project.

“[…] they say you die twice. One time when you stop breathing and a second time, a bit later on, when somebody says your name for the last time.” ― Banksy

After a conversation with the makers, I found out the project started when Lisa talked about how afraid she was of losing Erik a “second time” as her memories of him were fading. So, I believe Aaron and Paul were trying to make this experience capture Lisa’s memories of Erik in a way that it will last indefinitely as well as sharing this for others to relate to.

As such, I believe the meaning of each scene was to show what a person Erik was through Lisa’s memories. The phone calls and the holographic look of the piece make sure that the user knows this was not the present day, but, looking at the past. The phone call format of the audio (which I presume was unchanged from an actual call) also allows the user to feel for Lisa as some of her feelings come out in her dialogue. This was emphasized in a scene in which she talks about how she hated the hospital. In this scene, her hologram twists and convulses with every repetition of “hating the hospital”.

I believe the work was very successful as it made me think of my own experiences, memories and how I should live in the moment and not take people for granted. So, instead of trying to put us into Lisa’s shoes, the experience makes us viewers, relating Lisa’s experience to our own lives.

In my experience, I found the narrative to be continuous and well paced (I did not detect any obvious breaks or jumps in the story), which means the adapting narrative worked well. The holographic style did not distract me from the story. Instead, the color choices and timed convulsions (see last sentence of “Interpretation”) added to the experience. In addition, having Erik shatter as he died was an effective choice in showing how big and heartbreaking it was to lose a loved one. This was further emphasized by the physical installation, which burned into my mind that, though Erik has dies his first death, he is still around. This made the experience unforgettable, which was what I believe Lisa wanted.

As for making sure Erik stayed in Lisa’s memories, Aaron and Paul presented a clip of Lisa and others who knew Erik trying the experience. I believe VESTIGE did justice to those close to Erik by keeping him in their memories.