Review: The Day the World Changed

When you first put on the VR headset in The Day the World Changed, you appear amidst darkness, and there is one blackish, greyish, smoke-y ball in the center of the room. You can see ghostly outlines of the other participants in the room. As soon as all the participants are set up, the experience begins and the visuals bring you on a journey around the world. You are in space and viewing the world from above, as a black smoke travels across the globe and it spins. A voice narration explains the history of atomic bombs, and as you follow this black smoke, you realize that you are the bomb. You start dropping down to a specific spot on Earth very, very quickly, and BOOM! Everything goes black.

You find yourself in the ruins of a building affected by the bomb. There are rocks on the ground and you can see your fellow participants standing around a centerpiece. Three objects appear, and as you get closer to one, you can hear the story behind that object. You can turn it and move it to see all angles of it. One of the objects is a lunch box. The woman’s voice tells you that this is her son’s lunchbox that he accidentally left at home the day of the bombing. 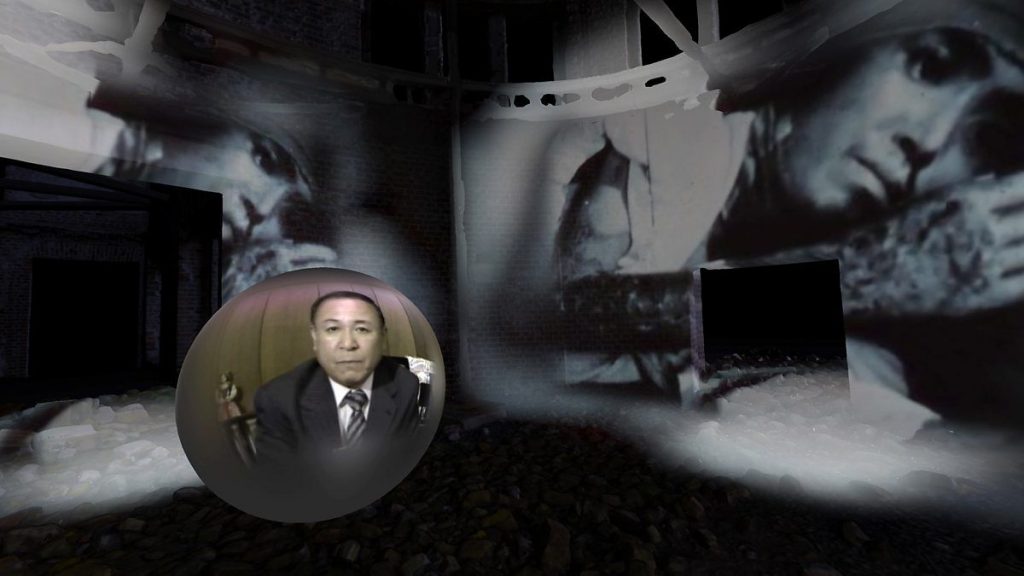 A rotating sphere appears above the centerpiece and all the objects disappear. It broadcasts news about atomic bombs, as a black and white projection is presented onto the walls of the room. Soon, the sphere turns into a rotating globe and you can see all the areas around the world where atomic bombs have affected. A black smoke snakes around these areas, hitting one point after another.

Suddenly, one half of floor of the room drops. All the rocks disappear and if you are standing on this half of the floor, you are now standing in a pit of nothingness. Hundreds of black and white photographs surround the room and the walls of the room starts going down. As the walls go into the ground, the photos go along with it. This melts the floor into a new puddle of black and white with each incoming photo. The descend accelerates until everything is black and you suddenly find yourself in the center of hundreds of giant missiles pointed directly at you. The voice narration tells you that the combined power of all the missiles that currently exist has the power to destroy the Earth.

Little blue flecks start coming out of your fingertips, and as you move your controllers around, the flecks start spreading. The “goodness” of the flecks start dismantling the missiles and they disappear. A message appears telling you about ICAN, the International Campaign to Abolish Nuclear Weapons, and how you, you can affect change.

This piece takes full advantage of many aspects of VR as a medium. The work uses visual, aural, gestural, and haptic elements to enhance the impact. The participant isn’t simply a spectator in this work. They can interact with the space, as well as see other participants in the viewing. As fictional as the space seems, the existence of other people in the space grounds the experience in real life. For the most part, the participants are expected to look all around the world that has been created for them and take it all in. When the three floating objects appear, they are expected to learn more about them by moving closer and turning the objects with their controllers. At the end, am impactful haptic feature arises, as the controllers vibrate with the participant’s blue flecks filling the space.

There is a recurring symbol of black smoke, from the beginning when you see it take over the entire world you are flying over to when you see it take over the mini globe in the center of the bombed room. The piece switches between presenting the story to the viewer and giving the viewer a role in the space, most notably when the participant becomes the atomic bomb and when the participant gains the power to flick blue goodness. It is a subtle, yet impactful addition to the participant’s role, so not to further overwhelm them in such a busy space. 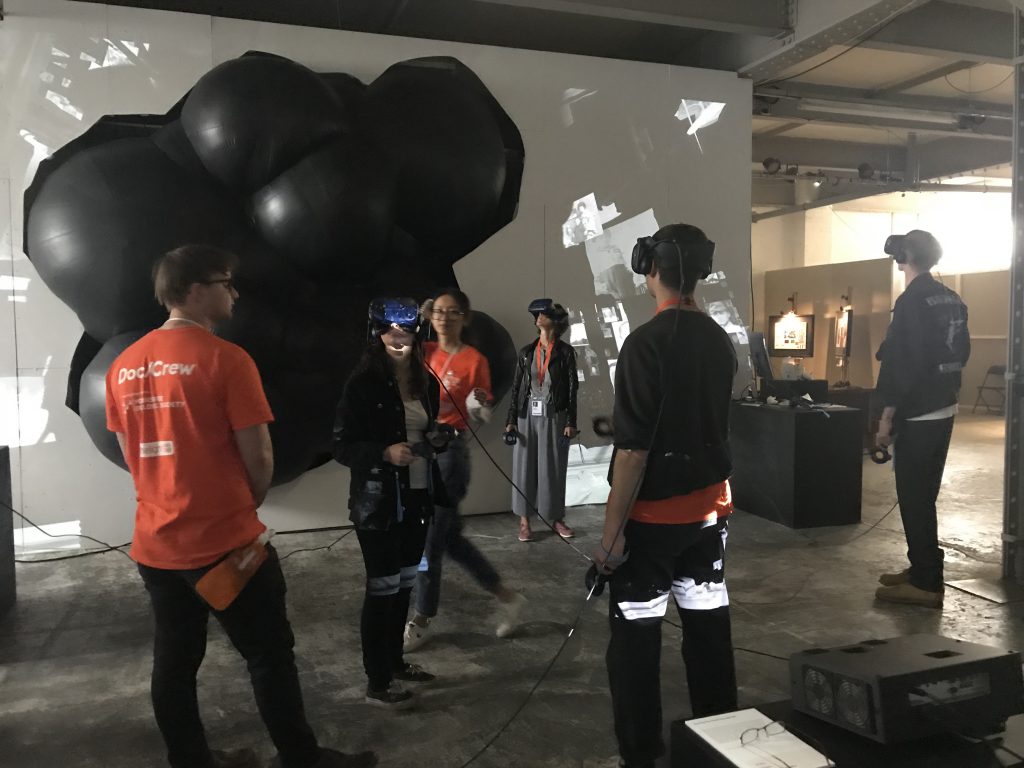 It is a poetic piece, with a practical message: to join in activism to abolish nuclear weapons around the world. The piece is a very cool experience to delve into, but it ends on a note that urges you to do something tangible in the real world. It is clearly reated with an agenda, even if just to bring awareness to such a big issue. I think it is successful in giving the user an unforgettable experience. The work has some of the most beautiful and mind-blowing visuals I have ever seen. The part where you find yourself in the center of nothing with hundreds of giant missiles pointed at you is awe-inspiring. I want to explore that entire world, walk around, and interact with everything. If there was anything I would change, it would be to make the audio more engaging in the bombed room. The piece would present a much stronger message if it chose an easier to understand and more to the point narrative during that part. The artistic use of the media is one of the strongest I’ve seen at the festival, but the storytelling aspect is slightly not as consistent.