An Interview with Richard Butchins 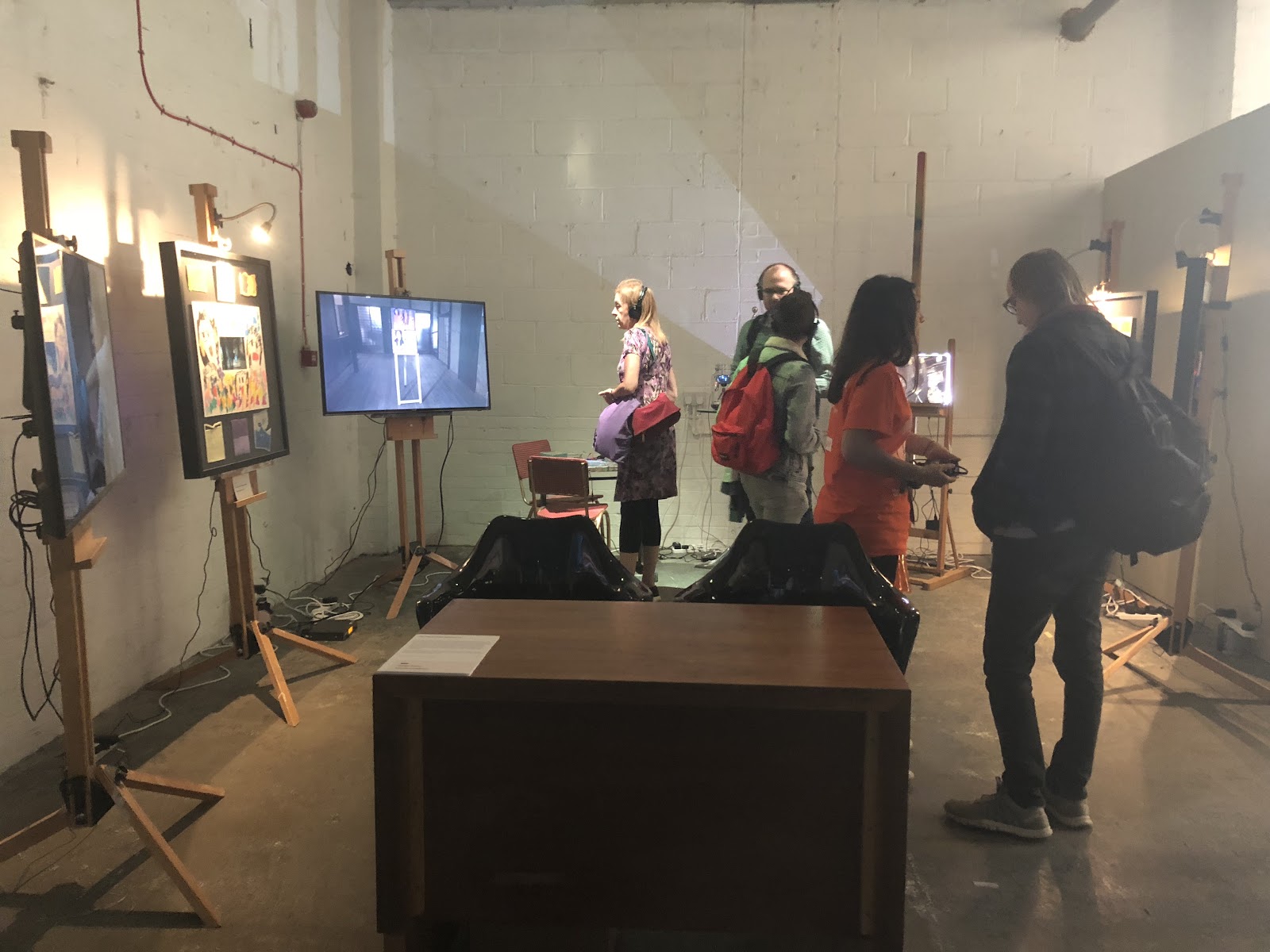 “The Voice of the Unicorn” exhibit at Doc-Fest 2018

Richard Butchins is a producer/director out of London with experience in a variety of different genres. At the Sheffield International Documentary Festival, he showcases an installation entitled “The Voice of the Unicorn”, though Butchins himself states that he feels the piece would be more fitting in an art gallery than the festival’s alternative realities exhibit. The piece features 8 separate sculptures with a variety of screens, displaying looping footage of nonverbal Japanese artists at their work.

At the end I have included excerpts from a pamphlet accompanying the piece, as I find it fascinating and believe it provides a wonderful context to understand the framework Butchins operates under, though it is not necessary to understand the interview itself. 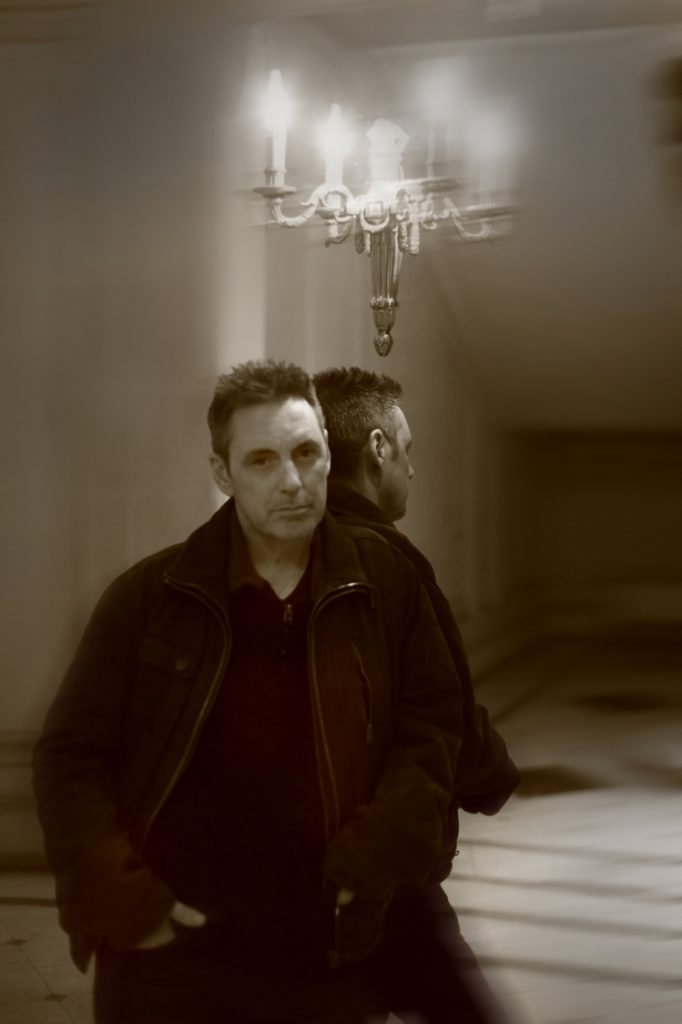 Arielle Bishop: Do you usually find that your inspirations are a coincidental accident like you did in this instance?

Richard Butchins: I don’t know. Inspiration can be sparked by anything really. I suppose I don’t know what attracts me emotionally to my subjects. I don’t know what that is until I find it. Some things you think are going to make really interesting films and they actually aren’t, they’re quite boring. I think it’s really about characters, people. Normally it’s a very organic experience with what I find experience.

Arielle: How was it collaborating with the artists at Corners?

Richard: They were really great, truthfully. It’s not really a collaboration in the straight sense of the word because they just do their own thing. They don’t really care or pay much attention to what I do. You can sit in with what they do and they’re not going to adapt to work with you, they don’t respond off you, they don’t bounce off you ideas wise they just do their thing. If you give them a piece of paper or a piece of cardboard that’s strangely shaped they’ll draw on that, if you give them one that’s circular they’ll draw on that. We explained to them what I was doing and they were like ‘yeah whatever sounds great’ and just go on with what they did. I fit in around them rather than any other way.

Arielle: And is this a much different style from anything else you’ve done?

Richard: Well sort of, I mean there’s a language barrier anyways I don’t speak Japanese, they don’t speak at all. There’s an added communication barrier. You sort of couldn’t have that conversation that you could have with say, a documentary contributor, who speaks the same language as you or who even speaks in a kind of, formal linguistic fashion that we might understand that they don’t understand, or choose not to understand, or just don’t give a fuck about.

Arielle: Given the recurring theme of silence throughout your piece, how did you decide to design the audio the way you did?

Richard: Well the audio’s not finished, so what you’ve got there is a kind of approximation of what the audio will be, which is basically lots and lots of field recordings, and incidental recordings. There are a couple of interviews, so there’s an interview that you see with the woman who is the dancer, and there’s an interview with the woman who set the place up, sort of talking about the artists and the history. But I haven’t quite decided how I’m going to use that.

Arielle: How do you feel that the screens are altered by working as a combined piece rather than as individual ones?

Richard: I have no idea. I mean, they work as the person perceiving them wants them to work. So I may have an objective in putting them all together, but that isn’t ever going to be the way that someone sees them, it’ll just relate to them the way it relates to them in their own perception, and their own interpretation of reality. So what I intend, and what people interpret are two completely different things.

Arielle: Do you have a specific intended message overall?

Richard: Shut the fuck up. Everybody could do with shutting the fuck up and considering what it is that they’re actually saying and doing. And I don’t just mean that again, in terms of talking, I mean that in terms of that relentlessly barrage of stuff that’s hurtling around the place. You go instagram your meal, instagram your cup of coffee, stick it on facebook, shove it on tumblr, whatever. Just stop. Just don’t. Maybe the world should just turn the internet off for a day. It’s never going to happen, but it’d be great. Because people have gotten to the point where they confuse information with knowledge. They’ve confused data with understanding. People have become even more to superficial interpretations of the world which are really simplistic. The message I’m giving people is that you experience the world as phenomena. You then, forget that you’ve done that and turn it into some weird picture of reality that you think is more real than the reality that you’ve actually experienced in the first place.

The Voice of the Unicorn is about perception and silence, more specifically communicative silence. It is a concurrence of myself and artists at their atelier in Osaka. That atelier is called Corners. Literally, I suppose, because it is situated on a corner. There could be another reason. I never asked.

The artists at Corners are known by society as “autistic” and I inspect what that might actually mean. The Japanese medical term for autistic is jiheishō – the illness of self-closure. I don’t know about that…

I hadn’t planned to work with Corners. I was in Osaka working with the dancer Kazuyo Morita, who also features in this work. She introduced me to Corners and I noticed two things: first, my fascination with the work inside the calm atmosphere of the building and secondly, that I felt so at home. It’s a space free from the pressures of the ‘real’ world – a world I increasingly fail to understand or navigate effectively.

The work is presented as a set, series, or group of screens which may be viewed in any order (or disorder) and they contain video loops ranging in length from one minute to the indefinite.

A soundscape is provided in the form of an ambisonic headphone mix. Ideally I prefer to use speakers as – aside from one instance – the sound is disassociated from the visual images. This is to replicate a state of sensory confusion.

The artefacts in the installation are indicative of an artist’s atelier and the use of easels to display the video screens ia s nod to the studio workshop tradition and to the increasing replacement of reflection with consumption of the world.

[following this is an additional 3 pages that include explanations for each individual work within the set. I have excluded it because, while it is informative to someone viewing the piece, it should have little impact to a reader who has not actually seen the art installation.]

In Signs (1960), the French philosopher Maurice Merleau-Ponty examines ”Indirect Language and the Voices of Silence”, suggesting that language itself is partly silence because it does not directly voice an original ‘thing’. Instead, language is allusive and indirect, and also claims meaning lies in the movement of speech, the articulation, silences, gestures, and ebodid responses generated by situated language use. For him, meaning lies in the gaps and tensions between words, by what is said and left unsaid, by speakers and listeners, and in the “background of silence which does not cease to surround it and without which it would say nothing.”

Most of us don’t want to think, writes the American essayist Alan Jacobs:

“Thinking is trouble. It can force us out of familiar, comforting habits, and it can complicate our relationships with like-minded friends. Finally, thinking is sow, and that’s a problem when our habits of consuming information(mostly online) leave us lost in the echo chamber of social media, where speed and factionalism trump accuracy and nuance.”

Increased amounts of information, as well as the accessibility to it, do not help us to understand the essence of things. If anything, the advent of a distracting and noisy environment creates a climate where knowledge is substituted by data; volume and disparity increase our sensory overload and ‘knowledge’ becomes increasingly hard to attain. Where once, perhaps, it was possible to retreat to a quiet place to reflect and contemplate information to process it into knowledge; it is now ever more difficult to achieve this as even our private spaces are wirelessly connected to the world.

The artists at Corners have the advantage of not being encumbered with such things (though they have other encumbrances to deal with). In my personal experience, the ever-present existence of the ‘online’ causes sensory distress that far outweighs any provision of enlightenment. The ability to do only one thing at a time until that thing is complete is less and less of an option. Wittgenstein held that we are captive to certain vision sof a way things ustt be; we oversimplify things in the interest of having a coherent picture of reality. We invent theories: theories of mind, of language, theories of everything.

The ontological significance of modern painting and the plastic arts lies in the alternative philosophy they embody, as revealed through their treatment of depth, colour, line, and movement. Ultimately, such works teach us anew what it means to see.”

This was Ponty’s thought about painting and I would argue that the artists in the Voice of the Unicorn do just that.