Is Anna Ok? is a VR story of two twins, told in two discrete parts. The twins, Anna and Lauren, were extremely close for their entire lives, until one night tragedy struck, changing their relationship forever. Anna sustained a brain injury from a car accident, leaving her to deal with the subsequent trauma, while Lauren struggles to become a caretaker of sorts for her sister, comforting Anna through her recovery.

This VR piece is comprised of two stories, one from Anna’s perspective, the other from Lauren’s. In the beginning of both stories, Anna and Lauren introduce the user to their relationship through a series of baby pictures and brief anecdotes about their childhood. In Anna’s half of the story, the user is greeted by Anna holding a picture frame of the two of them, inviting the user to pick up the frame to experience her story. In Lauren’s half, it is the other way around. By picking up the photo, the user “becomes” either Anna or Lauren and begins their story.

Anna’s story revolves around her recovery of her brain injury, as she learns to adapt to her memory loss and injured mental faculties. We, as Anna, begin by reminiscing about a walk home one day with Lauren—then, suddenly we hear an urgent wailing of police sirens and lights that flash across her dark memory. A second later, we awake in a hospital bed alone. In Anna’s story, her narration is cogent and understandable, but the world around her/us is confusing and, at times, frightening. The story follows multiples chapters throughout her recovery, including her rehabilitation at the hospital, sitting in her bedroom, and an overwhelming evening trying to navigate the Christmas fair with Lauren. At the fair, we as Anna are searching for Lauren, but the fast-moving motion-blur from people in the crowds passing by us distort our view of her. This overwhelming scene is emblematic of Anna’s overall struggle with recovery, but Lauren appears as a saving grace to guide us away from the overwhelming crowd and back to safety. At the end, the user becomes “unbodied” just like in the very beginning of the piece, and we watch Anna and Lauren walk off together into the distance. 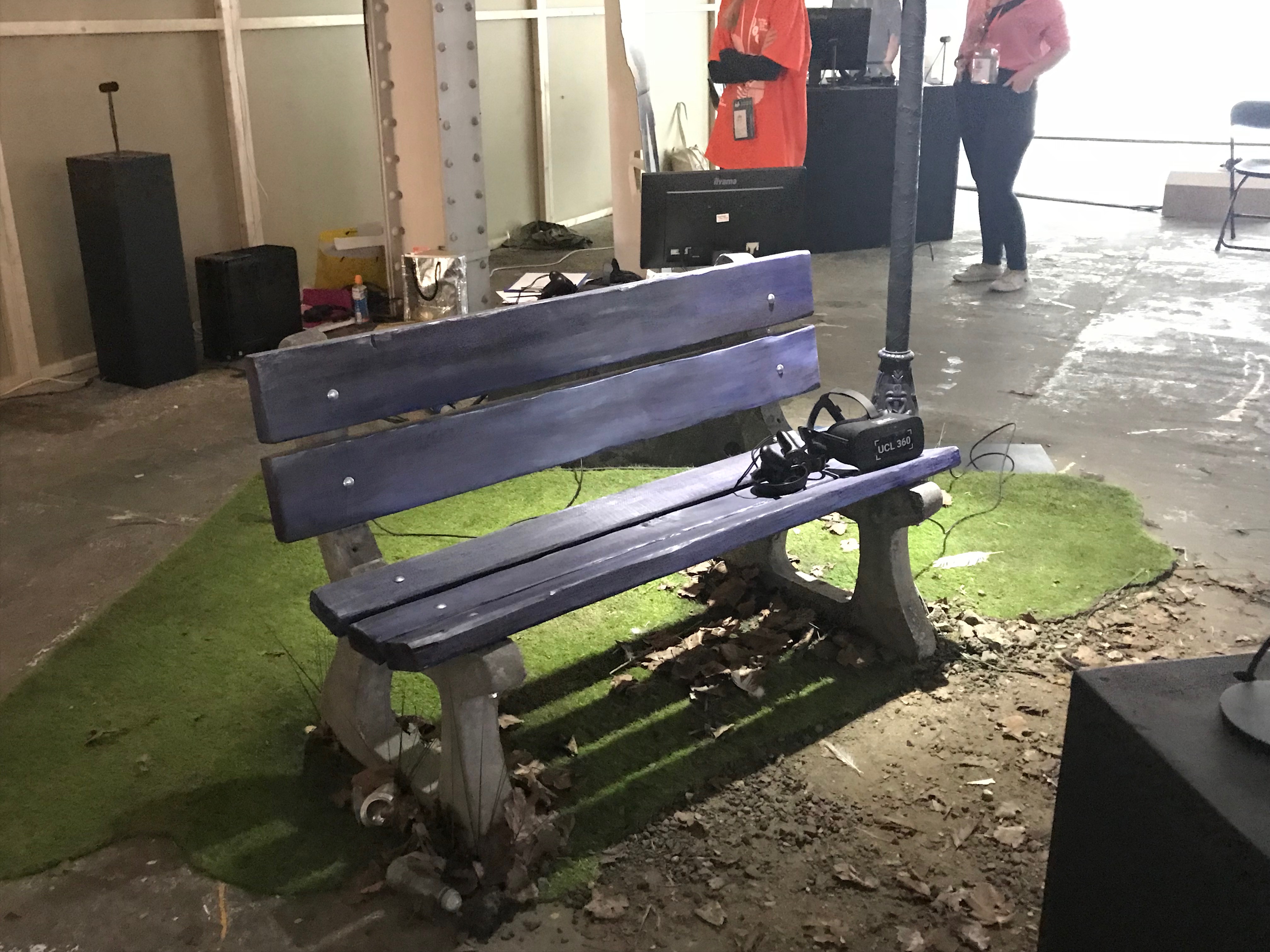 While Anna’s story tells the tale of her memory loss and difficulty recovering from her injury, Lauren’s provides an outside perspective on Anna’s journey. Lauren witnessed the accident, and her memory lacks gaps, so she can give the user a more detailed version of the event. She has a recurring flashback to the night of the accident, which is represented to the user with a visual of Anna’s torn jacket surrounded by giant shards of glass, against a stark black background. As Lauren, the user visits Anna in the hospital and rehab; we hear Lauren patiently answer Anna’s repeated questions of “Where are we? What time is it? Where am I?” as she struggles with her memory. Later, we see Anna’s personality shifts and mood swings as she attempts to settle back into her typical life, even after her brain has been permanently altered. In the last scene, we are again at the Christmas fair, and this time we as Lauren can see Anna’s confusion and irritation as people swarm past her quickly. Anna reaches her hand out to us, and when you grab it back, you become “unbodied” (just as in Anna’s story) and watch the two walk off, as a narration plays in the background about how Anna and you (Lauren) are the only ones who can truly understand each other.

Furthermore, throughout the piece, the user is invited to pick up various objects that yield additional auditory narration. For example, in the rehabilitation center, you can pick up a calendar that triggers Anna to tell you that she can’t remember what day it is, further indicating to the user the severity of her memory loss. In Lauren’s, you can pick up her cell phone in the rehab center as well as personal objects in her bedroom. In both, there is light aspects of magical realism, such as a glowing lantern with a snow globe type scene of the Christmas fair inside, that transports you from the bedroom to the final chapter, the Christmas fair.

Is Anna Ok? masterfully uses interactivity as a means to further the narrative and create a sense of identity with the characters. The points of greatest interactivity are when the user is inviting to pick up objects around the rooms in each chapter. The user is incentivized to pick up these objects; when they pick something up, they are rewarded with another little audio snippet that adds to the overall narrative of the piece.

In addition, Is Anna Ok? utilizes unconventional storytelling. This piece completely takes advantage of virtual reality as a medium by create two immersive stories that physically put the user in the literal shoes of the protagonist(s). This split-storytelling model was extremely necessary for this particular story. Because Anna suffered from memory loss, it would be impossible for the user to gain a complete understanding of the story from just her recollection of the events. Furthermore, Lauren plays an equally important role in Anna’s story, but her experience of the event and the aftermath are completely different than Anna’s—it would be impossible to combine both their narratives into a single-headset experience without losing the personality of each piece. With a narrative headset experience centered on each of the two sisters, the users can become fully immersed in “their” side of the story.

Furthermore, this dual headset experience creates the perfect opportunity for social interaction within virtual reality. Because the user only has access to one side of the story, they are encouraged to talk with the other user that had been in the other half of the experience at the same time. By conversing with “your twin,” you can figure out the entire narrative, giving each other answers to the questions posed in each of your narratives. This ingenious way to engage the users is a great example of how powerful extension can be in a virtual piece. It provides the user with an outlet to discuss and, in a way, relive the experience after the actual VR story has ended. 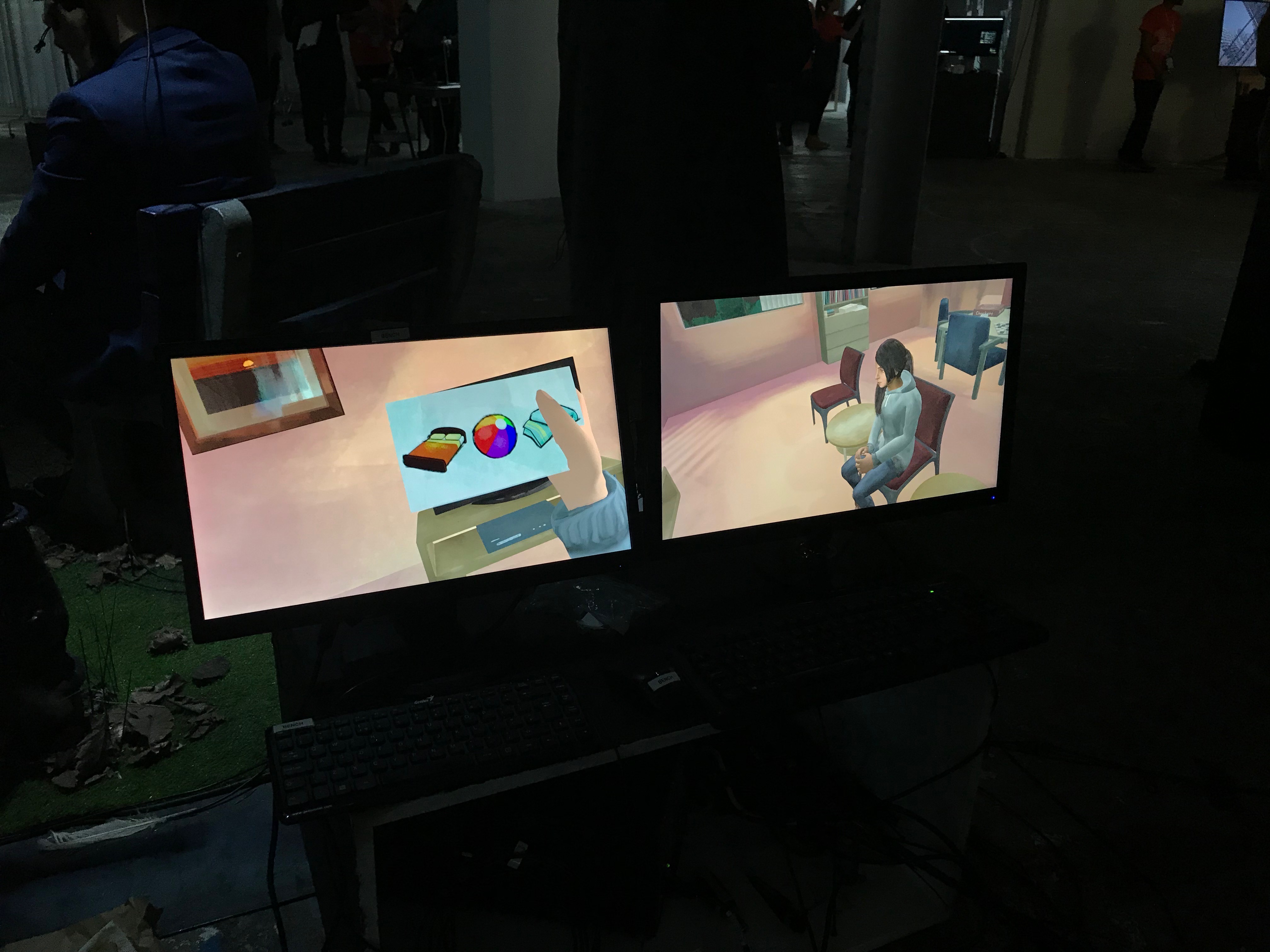 Simultaneous view from the two headsets. Left is Anna, right is Lauren. They are experiencing the same memory, but both sides remember it very differently.

When speaking with Camila Ruz, the mind behind Is Anna Ok?, she revealed to me that the target demographic of this story is not necessarily for the relatively few amount of people who have the disposable income to buy VR headsets. Rather, she wants young women, perhaps those who have experienced trauma similar to that depicted in the piece, to have access to the story. She told me that she was even considering bringing the piece across the UK as a travelling installation that would go to different hospitals or museums, to make it more accessible to those who do not have 400 pounds to spare on festival tickets.

Is Anna Ok? sends the message that journalistic pieces about tragedy and trauma can still be uncomfortable and, ultimately, hopeful. Though the subject matter is dark, at no point during the piece was I afraid or disturbed. The story was framed around the sister’s close relationship and bond in the aftermath of the injury, not on the traumatic event that occurred. The story still felt authentic and truthful without detailing the more gruesome aspects of the story.

The work was extremely powerful. I was lucky enough to see both Lauren and Anna’s sides of the story. The piece masterfully crafted two narratives; each side had enough overlap to create an overarching story, yet they both posed questions that remained unanswered, that only the story in the other headset could solve. This deliberate storyline rewards and encourages interaction, both while in the headset and after the experience ends. I especially like that the piece is accessible to people who are disabled in a very natural, unforced way. One side of the story, Lauren, is labelled as “Standing” while Anna’s is “Sitting.” These physical markers relate to the story, as forcing the user to sit during Anna’s piece puts them in a similar state of restriction and immobility as she must have felt waking up in the hospital after the accident. However, it also means that the piece is very accessible for people who are physically unable to stand or can’t stand for an extended period of time.

Is Anna Ok? is an innovative piece that explores the aftermath of trauma, including the ways relationships must change and adapt. Despite its heavy subject matter, the piece is hopeful and poignant, focusing first and foremost on the bond between its twin protagonists, and never letting the user abandon hope about their situation.