June 18, 2018–In a new Shorenstein Center study conducted with colleagues at Northeastern University, we assess major patterns in foundation support for nonprofit journalism and media in the half decade leading up to the 2016 election, focusing specifically on support for digital news nonprofits.

Launched over the past fifteen years, digital news nonprofits at the national and state/local level such as ProPublica and Texas Tribune, along with their public media peers, have aimed to fill gaps in coverage created by the dramatic decline of the newspaper industry. Most news nonprofits rely heavily on foundation funding as a primary or major source of revenue. Assessing foundation investments is therefore crucial, since they remain the financial backbone of nonprofit news, playing a behind-the-scenes role in guiding the direction of the field, including the types of subjects covered, organizations supported, and regions prioritized.

We assessed 32,422 relevant grants totaling $1.8 billion distributed by 6,568 foundations supporting journalism and media-related activities between 2010 and 2015. About a third of this funding or $570 million was dedicated to journalism higher education, the Newseum, journalism fellowships, and journalism research, legal support, and technology development. An additional 44% or $795 million supported public media and 5% or about $81 million backed nonprofit magazines.

In comparison, 20% or about $331 million directly supported national, local/state, and university-based digital news nonprofits. In evaluating direct support for digital news nonprofits, we conclude that many innovative projects and experiments have happened and continue to take place, but that grantmaking remains far below what is needed, even in an era of increased journalism giving following the 2016 elections. Our analysis identifies sharp geographic disparities in foundation funding, a heavy concentration of resources in a few dozen successful digital news nonprofits and on behalf of coverage of a few issues. At the national level, there was also the granting of money to a disproportionate number of ideologically-oriented outlets.

Although there are some success stories, neither the digital news nonprofit sector, nor any other form of commercial media have yet been able to meaningfully fill the gaps in coverage created by the collapse of the newspaper industry. A major challenge is that despite more than 6,500 foundations supporting journalism- and media-related activities during the first half of this decade, just a few dozen foundations have provided the bulk of direct support for news gathering. At the state and local level in particular, digital nonprofit media funding depends heavily on the John S. and James L. Knight Foundation and a few other philanthropies. Several trends since 2016, however, offer reason for optimism, including the launch of the NewRevenue Hub and NewsMatch, along with the considerable “Trump bump” in revenue at ProPublica, which has used the funds to expand its operations at the state and local level. 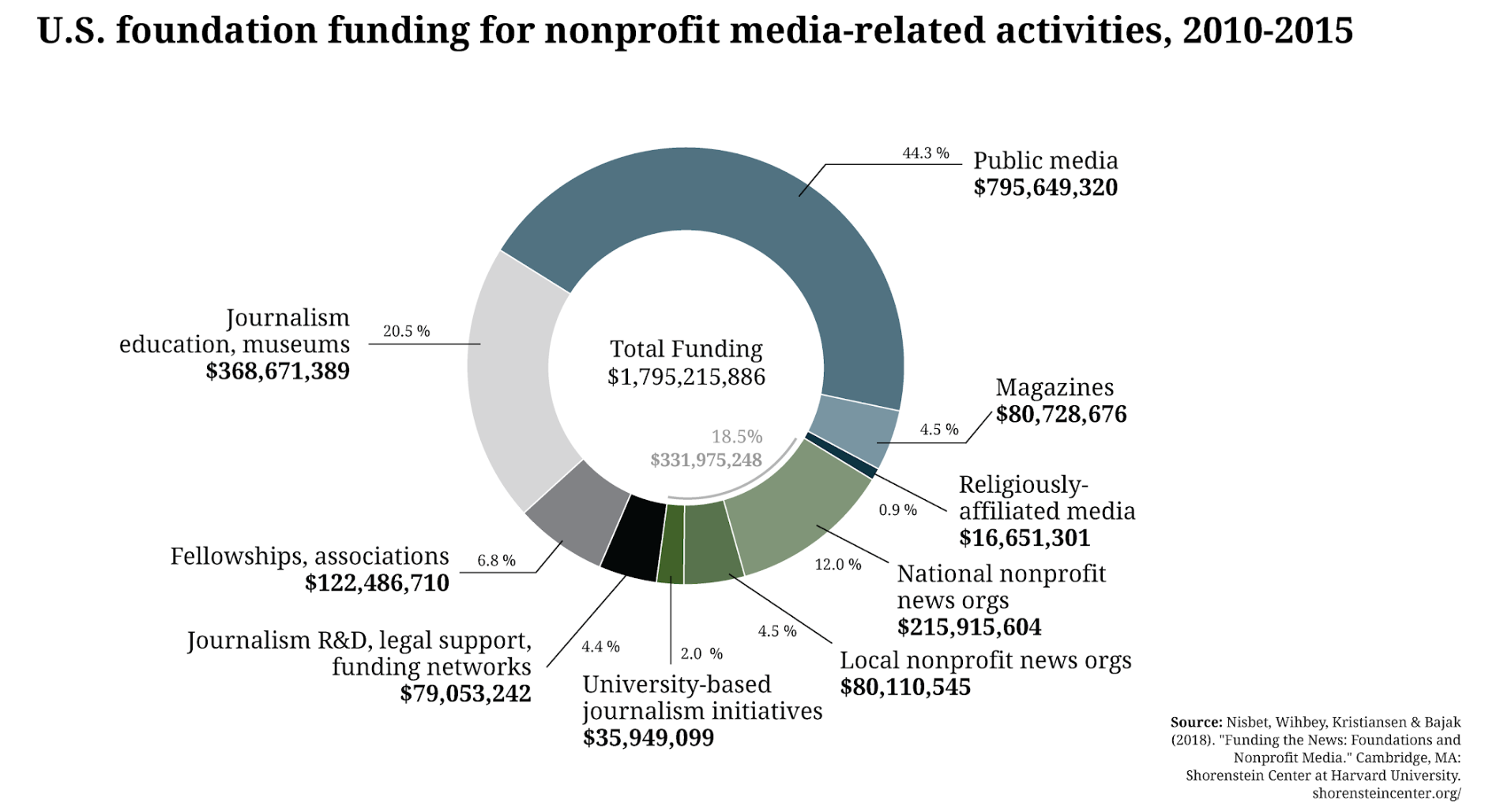 Several funding categories assessed in the Shorenstein study were not directly related to news nonprofits but represented activities or initiatives intended to enhance the field of journalism generally and its public understanding. These other categories of grants reflect the tough choices that funders face, as prioritizing one of these areas, even if to improve the practice and reach of journalism in society, may take away from direct support for nonprofit news production. Specific to these other activities:

Relative to direct funding for non-profit news production, among the study’s key findings: