In a paper published this week,  I review the history of U.S. philanthropic strategy relative to climate change, before assessing the important 5-year period following the defeat of the 2010 cap and trade bill and leading up to the 2016 elections. I analyze $557 million distributed across 2,502 grants by 19 major foundations, detailing the financial support for specific strategies and solutions, noting longstanding patterns in funding, but also evidence of new directions. Today, major foundations are once again identifying next steps and possible new directions related to Federal and state policy. In the conclusion to the paper, I emphasize the implications for strategic philanthropy during the Donald J. Trump presidency and beyond. The peer-reviewed article appears at Wiley Interdisciplinary Reviews Climate Change, a leading forum for analysis of the scientific and social dimensions of climate change, published in association with the UK Royal Geographical Society and Royal Meteorological Society.

Between 2011 and 2015, the 19 foundations I assessed continued to invest in efforts to shape Federal climate and energy policy, but redirected much of their funding to support actions at the regional, state, or municipal level, prioritizing the West coast, Midwest, and Northeast regions. In doing so, the largest environmental grantmakers remained committed to their decades-old policy and technology roadmap on climate change, investing in familiar approaches, strategies, and goals: 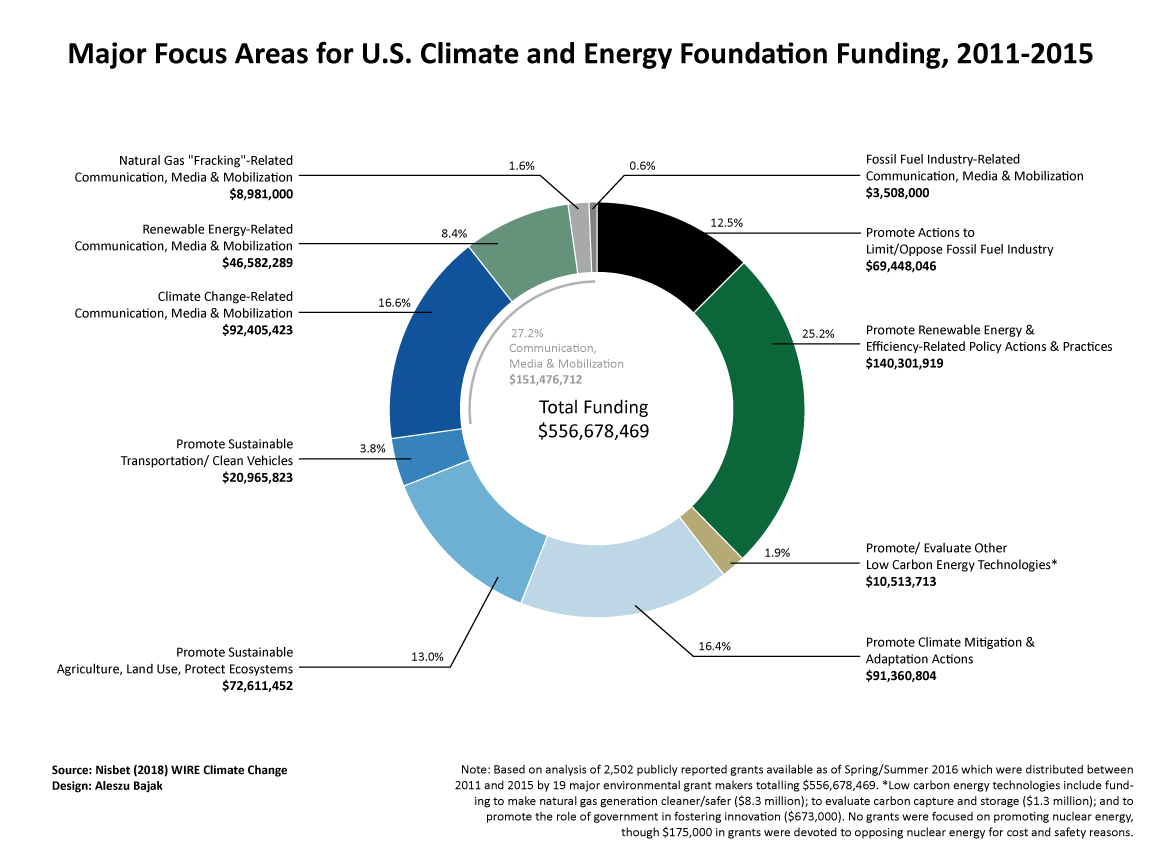 However, funders also responded to calls for new directions. Some of this shift occurred on the part of the Energy Foundation and other major funders such as the Hewlett foundation, but much of the change was also driven by smaller funders investing in complementary or counterbalancing strategies:

Climate Philanthropy in the Trump Era

In coming years, as the endowments of major foundations continue to grow, providing philanthropists with ever greater resources, they are likely to play an even more active and strategic role in funding actions to address climate change in the United States and elsewhere. In 2017, the Hewlett foundation, for example, announced it would spend $600 million over the next decade to combat the problem.

By framing the challenges and defining the solutions to climate change, as they did in the years following the defeat of the cap and trade bill, Hewlett and other major philanthropies are likely to deepen their ability to bind together organizations and leaders into shared approaches and strategies. In an era of political dysfunction and diminished public spending, many will look to philanthropy and their resources for answers. But as foundations consider next steps, several considerations are merited.

First, philanthropists and their grantees may want to reconsider their opposition to support for nuclear energy, their reluctance to consider carbon capture and storage, and the absence of funding to explore scientific and policy challenges related to geoengineering research. Analysts warn that the United States and many states will not meet their emissions goals if current nuclear power plants close, and if new plants are not built in the future. Several expert projections on decarbonizing the world and U.S. economies define an important role for nuclear energy and carbon capture and storage, and intense scientific debate continues over the technical feasibility of a 100% renewables pathway to decarbonization. Over the next few years, there is also likely to be considerable debate over geoengineering, as more scientists evaluate various methods and their risks, and as political leaders consider the option. However, during the post cap-and-trade years, not a single grant from among the 19 foundations focused on geoengineering research or its governance, a trend that should be addressed.

Second, In the post cap-and-trade years, the $151 million devoted by funders to climate change-, fossil fuel industry- and renewable energy-related communication activities were complemented by a combined $150 million spent by the billionaire Tom Steyer in successive elections to mobilize climate voters on behalf of Democratic candidates. Yet in 2016, despite the stark differences on climate change between Trump and his rival Hillary Clinton, Trump won a majority of the decisive Midwest battleground states. Nationally, Republicans retained control of Congress and strengthened their hold on state governments. Today, polling shows that although liberal Democratic voters consider global warming among the most important issues influencing their vote, among moderate-leaning Democrats and Republicans, global warming ranks as a mid- to bottom-tier priority. During the Trump years, similar to the post cap-and-trade period, given the challenges faced and the evolving political dynamics, critical evaluation of communication and mobilization strategies are needed.

DETAILS ON THE  ANALYSIS

To review the climate and energy-related funding choices of major U.S. foundations in the post Cap-and-Trade years, during Spring/Summer 2016 I compiled a database of 2,502 U.S. grants distributed by 19 foundations between 2011 and 2015. I selected the 19 foundations based on their track-record of grant giving on the issue, their association with specific funding approaches, and the availability of grant specific information provided by way of their web sites or tax filings.

These 19 foundations represent the major agenda-setting funders in the U.S. on climate change and energy, with their history of funding stretching in many cases back to the 1990s, influencing the decisions and focus of many other grantmakers, shaping the direction of much of the non-profit and advocacy sector.

To inform analysis and conclusions, available white papers, strategy documents, calls for proposals, and annual foundation reports were also reviewed. For each of the 19 foundations, Table 1 in the paper summarizes the sources of grant information per foundation available at the time of data collection, the strategies used to identify climate change- and energy-related grants, years where missing data might exist, and other details on why they were included as part of the analysis. 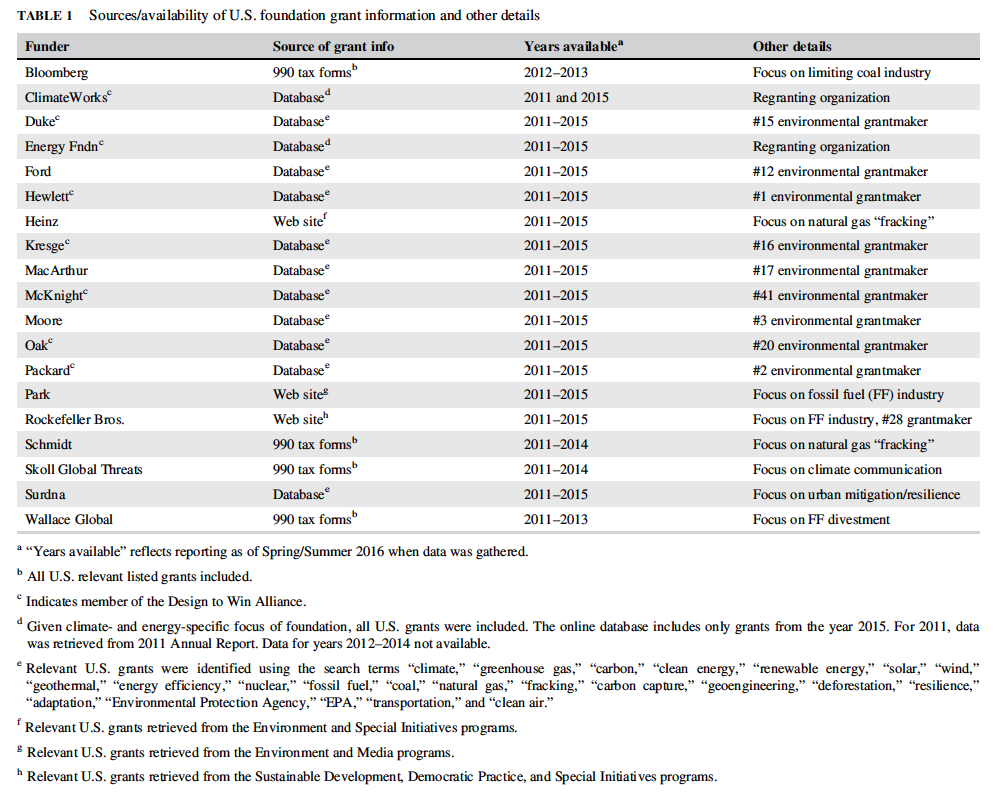 Given the scope and breadth of U.S. climate and energy-related funding, I was not able to include all relevant grant makers as part of my analysis.  But in selecting the 19 foundations to analyze, as highlighted in the previous sections, I focused on grant makers that have historically been among the largest and most influential funders of climate and energy-related policy options and technologies. For example, given the significance of the Design to Win alliance of funders, as summarized in Table 1, I began by including eight of the nine original allied funders. The ninth funder, the SeaChange foundation, was not included due to a lack of publicly available grant information. Further justifying their inclusion in the analysis, six of these eight Design to Win funders also rank among the top 50 environmental grant makers as tracked by the U.S. Foundation Center. These include the Hewlett Foundation (#1 in environmental giving), Packard Foundation (#2), Doris Duke Foundation (#15), Kresge Foundation (#16), Oak Foundation (#20), and the McKnight Foundation (#41). The other two original Design to Win aligned funders included in my analysis were the re-granting organizations Energy Foundation and ClimateWorks. I selected three other foundations because they rank among the country’s leading environmental grant-makers, and they have been recognized by scholars for their influence on the environmental movement. These three funders are the MacArthur Foundation (#17), Gordon & Betty Moore Foundation (#3), and Ford Foundation (#12).

Compared to these 11 major grant makers, I selected the other 8 foundations because of their comparatively unique focus, approach, or influence. The Skoll Global Threats Fund prioritizes investments in climate change communication, engagement, and media initiatives. The Surdna Foundation prioritizes a “next generation infrastructure” approach that emphasizes localized climate change mitigation and adaptation actions that serve the needs of low income and minority communities, with the goal of promoting justice and fairness. The Park Foundation and Rockefeller Brothers Fund (#28 environmental grantmaker) are notable for supporting strategies that directly target the fossil fuel industry by way of communication, media and mobilization campaigns. The Wallace Global Fund has played a key role in coordinating the fossil fuel divestment movement. Along with Park, both the Heinz Endowments (#26) and Schmidt Family Foundation have prioritized stricter regulation and/or bans on natural gas fracking. The Bloomberg Foundation has prioritized the funding of litigation and advocacy to limit or shut down coal fired power plants. In sum, my analysis includes 8 of the 9 Design to Win alliance members for which public records are available, 3 of the top 5 U.S. environmental grantmakers, 8 of the top 20 such funders, and 10 of the top 50.

Once grants from each of the foundations were entered into a database, to record the focus of each grant, I developed and refined categories by reviewing foundations’ mission statements, call for proposals, annual reports, program descriptions, white papers, and other relevant information. I categorized each grant by the main focus as determined by the description available for the grant, by cross checking with the web site of the grant recipient, and by way of the relevant program description for the foundation. These categories include a focus on Federal, state, or local climate change policy actions and research including those related to agriculture, transportation, adaptation; and human dimension such as health, equity, or jobs; actions related to energy policy, technologies, and efficiency practices including their human dimensions; forms of climate change and energy-related communication, mobilization, media; and actions specific to regulating, restricting, or opposing the fossil fuel industry. To inform my review, I report combined funding trends from among the 19 foundations and across the five-year period 2011-2015, detailing the aggregate patterns by way of a series of main tables. In some cases, drawing on the compiled database, foundation specific totals for a particular organization or focus area are also referenced.