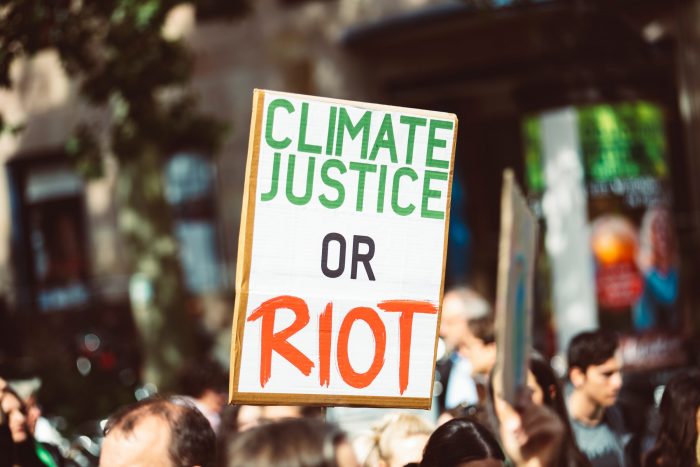 —For more on climate politics and moderation, subscribe for free to my Substack newsletter and podcast  Wealth of Ideas to receive new essays and podcasts direct via email.

Robbers Cave State Park in Oklahoma may be best known today for its picturesque lakes and trails, but for three weeks in 1954 the park was also the setting for one of the most famous experiments in social psychology. In the Robbers Cave experiment, Muzafer Sherif and his colleagues at the University of Oklahoma recruited twenty-two boys, all fifth graders from similar social backgrounds, to attend what they billed as a specially designed summer camp.

The boys were immediately split into two groups: the Eagles and the Rattlers. For the first week, the teams were kept on separate ends of the camp while they participated in a variety of bonding activities. The boys didn’t find out about the other team’s existence until the start of the second week. Having never met each other, the boys quickly began to refer to the other team as “outsiders” and “intruders.”

Following a series of competitive games, the boys’ rivalry grew more intense. They started hurling insults, calling each other “pigs,” “sissies,” and “cheaters.” Their perception of reality shifted. When researchers asked the Eagles and Rattlers to gather up beans from the ground and compare photos of how many each group collected, the boys bragged that their team outmatched the other.

In reality, the photos showed the same number of beans for each group. Fueled by competition and social isolation, the teams raided their rival’s cabins late at night. The Eagles burned the Rattlers flag; some boys started collecting rocks to throw at the others. Worried about physical injury, the experimenters called off the competitions.

More than sixty years later, the Robbers Cave study stands as a metaphor for today’s hyperpartisan politics. Seemingly every policy debate is a competition between two intensely hostile teams.

Those on the right and left oppose compromise by their political leaders, view the other party as extreme and uncivil, and believe that their side should benefit the most from any decision.

A recent study by Nathan P. Kalmoe and Lilliana Mason, political scientists at Louisiana State University and University of Maryland, found that more than 40 percent of Americans surveyed viewed the opposing party as “downright evil.”

Incredibly, 20 percent of Democrats and 16 percent of Republicans said they believed on occasion that the country would be better off if large numbers of the opposition died. In other extreme examples, party loyalists dehumanized their political adversaries.

For more on climate politics and moderation, subscribe for free to my Substack newsletter and podcast  Wealth of Ideas, and receive the latest essays and podcasts direct via email.

In the case of both parties, nearly one out of five survey respondents agreed with the statement that their political opponents “lack the traits to be considered fully human–they behave like animals.” According to their study, if the opposing party won the 2020 election, 18 percent of Democrats and 14 percent of Republicans reported they believed violence would be justified.The best-educated and informed partisans tend to be the most intensely tribal, engaging in “my side” reasoning that prioritizes victory over a desire for the greater good.

Research shows that the most well-informed partisans are quick to endorse their party’s policy positions–not as a matter of principle but, as New York Times columnist Thomas Edsall writes, “as a public act designed to signal their tribal loyalty as a Democrat or Republican.”

On no other issue are such animosities, prejudices, and biases more prevalent — and more problematic — than on climate change.

For those of us who advocate for action to address climate change, we are often told to be more like how we perceive our political opponents: more ruthless, more cunning, more aggressive, more willing to bend facts to our side, and more committed to the most audacious and ambitious policies regardless of their flaws. We are all too quick to rally around the banner of those voices that emphasize “us versus them,” “good versus bad,” and “winning versus losing.”

We view those opposed to action on climate change as extreme but seldom apply the same label to those on our side. Green New Deal advocates, for example, have framed the choice for Americans in starkly binary terms: Either join us in a Utopian quest to transform the United States into a social democracy or face the catastrophic consequences of a dystopian climate future.

There are no other choices. Their battle is equally against moderates and pragmatists as it is against conservatives.

As a community of advocates, we have become obsessed with the psychology and communication strategies of conservative “deniers,” with many scholars striving to expose the faults in conservative psychology, the duplicitous nature of fossil fuel companies, and the many ways in which Fox News and right-wing think tanks seed “denial” and engage in a “war on science.”

This research has in turn infected mainstream journalism and commentary, in which readers at outlets such as The Guardian and The Washington Post are consistently left with the impression that “anti-science,” “denier” Republicans may in fact be cognitively incapable of reason or compromise on behalf of clean energy policy, similar in nature to Holocaust deniers.

Only seven years ago scholars were actually debating the wisdom of calling those who oppose action on climate change “deniers.” Geographers Saffron O’Neill and Max Boykoff in a letter to the Proceedings of the National Academies of Sciences (PNAS) raised concerns about an earlier study at the journal that had divided experts into “convinced” and “unconvinced” camps, interchangeably using the terms deniers, skeptics, and contrarians to refer to the unconvinced.

“Continued indiscriminate use of the terms will further polarize views on climate change,” warned O’Neill and Boykoff, “reduce media coverage to tit-for-tat finger-pointing, and do little to advance the unsteady relationship among climate science, society, and policy.”

Their warnings, however, had little impact on the direction of scholarship, strategy, or journalistic coverage. Today’s ubiquitous branding of Republicans as the party of “denial” greatly exaggerates the intensity of opposition to climate and clean energy solutions among those on the center-right, creating a self-reinforcing spiral of false perceptions.

The more we become angry and the more we catastrophize about the future, the less likely we are to find common ground or even be able to treat our political opponents as human beings. And social media is only making everything worse.

For the past few years, polling has consistently shown that majorities of registered voters, including Independents and moderate Republicans, believe that global warming is mostly caused by human activities and say that they support climate regulations and clean energy policies.

Beyond this general voter sentiment, according to the Yale Climate Opinion Maps project, most adults in every Congressional district across the country say they support fossil fuel companies paying a carbon tax, regulating CO2 as a pollutant, and setting strict restrictions on emissions from coal power plants.

But research also indicates that many Republicans who privately support solutions to climate change refrain from publicly doing so out of an exaggerated fear of retaliation from their peers, a fear that has been magnified by efforts among some scholars and journalists to socially stigmatize the supposedly mass number of deniers among their ranks.

The more we become angry and the more we catastrophize about the future, the less likely we are to find common ground or even be able to treat our political opponents as human beings. And social media is only making everything worse.

Playing to the most basic elements of human nature, social media has done great damage to the climate change movement, destroying our ability to think collectively and discuss productively across lines of difference.

Artificial intelligence-driven platforms serve up a constant stream of news and commentary that reflects our existing biases and beliefs rather than content that might challenge them.

Those specializing in the dark arts of social media “engagement” have used these platforms to hack our brains, training our focus on conservatives and the evildoings of the fossil fuel industry while the end times loom.

Because it kidnaps our attention, the most inflammatory, most outrageous, and most catastrophic content is rewarded by social media algorithms, ensuring that it travels the furthest. Since social media is a place where we find comfort in our tribal identity, posting, liking, and spreading ideologically affirming content generates social value, regardless of the source, quality, or veracity of the content we may be sharing.

When claims are challenged, such as the viability of a 100 percent path to renewables or the political feasibility of the Green New Deal, climate advocates often respond by digging in their heels and attacking the critic, further demonstrating their loyalty.

In doing so, they follow the lead of a climate blogger or “Twitter celebrity,” who through their commentary make it easy for us to remain loyal to ideas or policies that have come to symbolize what it means to be a “climate hawk” or activist.

There can be no progress on climate change until we rebuild our civic capacity to discuss, debate, and disagree in ways that do not turn every aspect of climate politics into an identity-driven tribal war between good and evil.

We must harness our organizational resources and personal gifts to serve not as partisan persuaders but as partners in face-to-face dialogue with other Americans and decision-makers, embracing our common humanity.

But to embrace our common humanity, we must adopt and encourage the practice of what Georgetown University’s Cal Newport calls “digital minimalism,” a philosophy that helps you question what digital communication tools (and behaviors surrounding these tools) add the most value to your life.

It is impossible to resist the siren song of climate tribalism if, like the average American, you spend several hours a day on your smartphone swiping, scrolling, skimming, liking, hearting, retweeting, forwarding, and responding to other people’s thoughts, especially if they apply to climate change politics.

When a new Intergovernmental Panel on Climate Change report is released or the proposed Green New Deal is announced, your first thought in today’s news feed culture of righteousness is not your own original idea but almost inevitably someone else’s appealing to your worse biases.

Spending less time on social media and your smartphone will free up mental energy for contemplation and deep reading of a diversity of high-quality sources, alone with your thoughts, wrestling with uncertainties and complexities, scrutinizing your assumptions and beliefs.

Minimizing social media usage will also enable you to be more present and less judgmental during face-to-face discussions.

The initial focus of a conversation about a contentious topic such as climate change with a neighbor, community member, or elected official should be to simply recognize and affirm shared identities, ideals, and beliefs. Reframing climate change in terms of public health or religious duty, for example, may help foster a more thoughtful conversation.

Still, there are no magic messages capable of overcoming false beliefs or converting someone to your side. Yet with trust and relationships established, further dialogue can focus on working together toward common goals related to energy decarbonization and societal resilience.

If common goals on a specific topic may not exist, investing in more thoughtful conversations and the forums to engage in those conversations can at least help reestablish the norms of civility that have been lost in our society, enabling climate change advocates and those we disagree with to come to respect the nature and reasons for our differences.

*This article is adapted from a speech given at the 2019 U.S. Climate Leadership Summit held in Washington, D.C. A version was also published previously at Skeptical Inquirer magazine.

Nisbet, Matthew C. “Against Climate Change Tribalism: We Gamble with the Future by Dehumanizing Our Opponents.” Skeptical Inquirer, vol. 44, no. 1, Jan.-Feb. 2020.

–For more on climate politics and moderation, subscribe for free to my Substack newsletter and podcast  Wealth of Ideas, and receive the latest essays and podcasts direct via email.