July 19, 2017 — Because of the complexity and urgency of climate change, efforts to understand the problem’s social, cultural, and political dimensions must stretch beyond the environmental sciences and economics to be truly multi-disciplinary. To this end, over the past two decades, a growing community of scholars have focused on the factors that influence public understanding, perceptions, and behaviors relative to climate change; the nature of journalistic, media, and cultural portrayals and their effects; and the role that public communication, outreach and advocacy play in shaping societal decisions. This research has taken place across disciplines, countries and continents, generating broad-based interest and discussion. 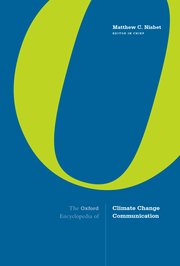 A version of this article appears as the Preface to the Oxford Encyclopedia of Climate Change Communication.

Until now, however, there has not existed a leading scholarly outlet where the broad range of climate change communication, media and public opinion research is reviewed, synthesized, and critiqued; or translated in relation to other disciplines and professions. To address this gap, the Oxford Encyclopedia of Climate Change Communication is a curated series of 115 original peer-reviewed articles published in print and digital format, and by way of the web-based Oxford Research Encyclopedia (ORE) Climate Science. The collected articles comprehensively review research on climate change communication, advocacy, media and cultural portrayals, and their relationship to societal decisions, public knowledge, perceptions, and behavior. Co-authored by more than 250 experts representing more than a dozen disciplines and twenty countries, the commissioned articles reflect five main areas of scholarship and research. These include: 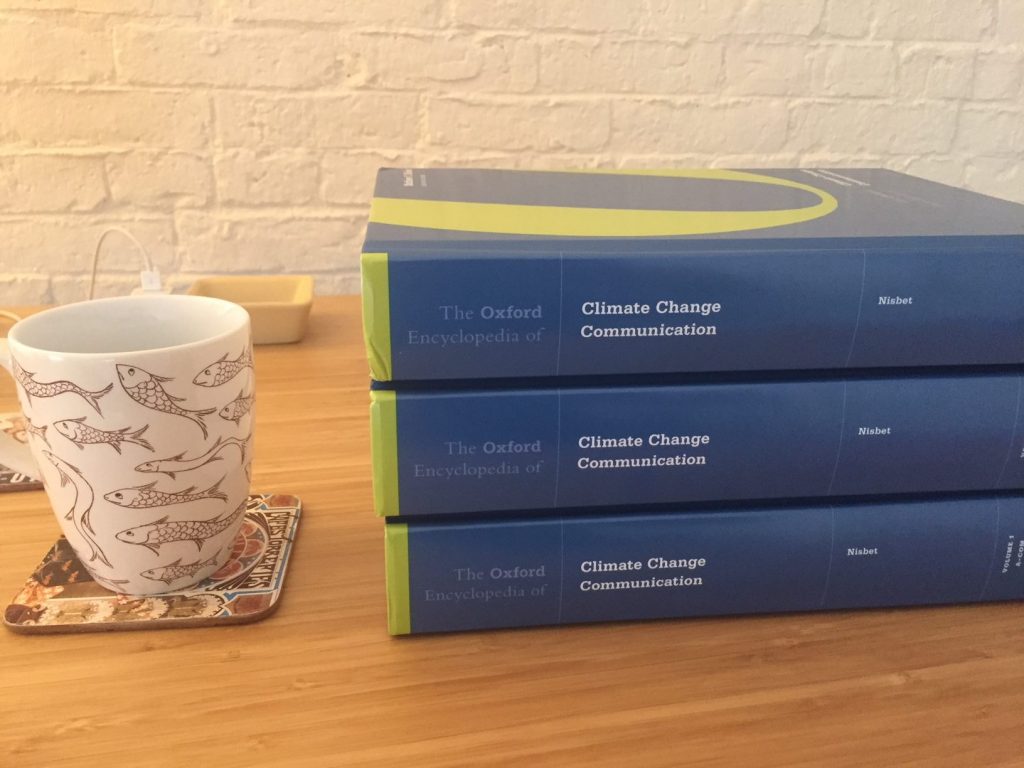 Collectively, the articles in this volume reveal a deep knowledge base about the barriers to public engagement with climate change, and the social and political obstacles to effectively managing the many risks involved. Scholars across countries have examined how values, social identity, mental models, discourses, social ties, culture, media, interest groups, economic conditions, geography, and weather shape individual judgments and collective decisions. They have also tracked the evolution of climate change as a social problem in relation to specific media systems and political arenas, describing the factors that drive the framing of debate. Yet not surprisingly, given the complexities involved, even after more than twenty years of research, easy answers on how to mobilize the political will needed to meaningfully address the problem are not readily apparent.

In regards to such solutions, researchers tend to conform to one of four different camps of thinking that map to slightly differing theories of social change. A first school of thought, comprised mostly of social psychologists, communication researchers, and decision scientists, views the challenge as a matter of persuasion: How can climate change be reframed in a way that resonates with the identities, priorities, and interests of different publics and be communicated about by trusted opinion-leaders? Through such strategies, public opinion will eventually pass a certain threshold of perceived urgency and importance, creating the political conditions for national and international policymakers to take aggressive action. A second group, comprised mostly of political scientists and sociologists, views the issue as a matter of power-based politics, requiring strategies and tactics that mobilize social movements and interest groups that pressure elected officials and industry leaders to ratchet up their efforts to address the problem.

A third group, comprised of more humanistic and critical scholars, views the issue as one of dialogue and deliberation: the challenge is to facilitate the opportunities for different publics to learn about, debate, and participate in collective decisions about climate change, and to co-produce knowledge about risks and solutions alongside the expert community. By building a stronger, more democratic public sphere at the local and national levels, the issue will eventually be better managed. Finally, a fourth group of scholars approach their research far less instrumentally. For them, the social dimensions of climate change are the ultimate puzzle worthy of study and inquiry. Their research is not intended to inform communication campaigns or political strategy. Rather their goal is to understand what climate change tells us about human psychology, society, culture, politics, or media systems. As scholars, they serve in an interrogatory role, exploring questions but not offering advice on how society can move forward to solve the pressing problems involved.

For many readers of the Encyclopedia of Climate Change Communication, one of these schools of thought is likely to be the principal lens by which they approach the collected articles, guiding their choices about what to pay attention to and what to accept as valid. I encourage readers, however, to engage in a more flexible and critical reading of the volume, seeking to engage with the multiple assumptions and perspectives offered by the more than 250 co-authors. Their conclusions frequently counter conventional assumptions and narratives about the roots of societal inaction on climate change and effective directions forward. By considering these differing perspectives, as readers we can come to hold our own assumptions and biases more lightly, and it is only as a product of such critical self-reflection that new insights are likely to emerge.