If you are reading this column, you have likely benefited from the scientific and technological advances that have transformed the world’s economy. For well-educated professionals who form the core audience for popular science magazines, these innovations have created new wealth and career opportunities. Yet paradoxically, the very success of the science and engineering sector has also created the conditions that have led so many others to distrust experts and the professional class. The same advances that have enriched those at the top of the global knowledge economy have also eliminated millions of jobs among those at the bottom, transforming entire industries and geographic regions, generating public resentment, and seeding political polarization.

When we think about the roots of antagonism toward scientific expertise in the United States, we too often focus on either partisan or religious differences. Yet analyses I have conducted with several colleagues of large-scale national public opinion surveys show that disparities related to income, education, and race play an even more important role in how Americans view the relationship between science and society, with these reservations transcending traditional left-right ideological differences. 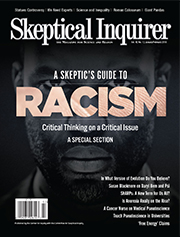 A version of this article appeared in the Jan/Feb 2018 issue of Skeptical Inquirer magazine.

When asked generally about the societal impact of scientific advances and technological innovations, those members of the U.S. public who express the strongest optimism tend to be white, hold a college degree or higher, and rank among the top quartile in terms of income. These individuals can justifiably expect that their careers will benefit from scientific innovations and that they will be able to afford new technologies and medical treatments. In contrast, individuals who express the strongest reservations about science and technology tend to hold a high school degree or less, earn less than $50,000 annually, and are more likely to be non-white. These individuals may be justifiably concerned about how they will compete in an innovation-based economy, afford access to new technologies or medical advances, and how such advances may reinforce patterns of discrimination and other social disparities (Nisbet and Markowitz 2014).

Perhaps in no area is the potential for public anxiety based on socio-
economic disparities clearer than in relation to driverless cars, automation, and artificial intelligence (AI). These innovations are promoted as boosting the economy, contributing to public safety and environmental protection, and enhancing consumer convenience. They are also likely to eliminate the jobs of millions of truck drivers, taxi operators, retail workers, and professionals. Tech companies risk further public backlash as they seek to fast track the adoption of driverless cars and AI applications, spending millions to avoid regulation (Lloyd 2017).

In a recent Pew survey, when asked to consider a future in which robots and computers can do many human jobs, more than twice as many Americans (72 percent) expressed worry than enthusiasm (33 percent) and a similar proportion expected that economic inequality would become much worse as a result of such advances. Concerns about the negative impact of workplace innovations were strongest among those lacking a four-year college degree (Pew Research Center 2017a).

Americans also express strong reservations about the impact on social inequality of biomedical innovations related to human enhancement. Strong majorities say they are “very” or “somewhat” worried about gene editing, brain chips, and synthetic blood and that these technologies would become available before they were fully understood. Much of their anxiety relates to anticipated disparities: more than 70 percent fear these innovations would exacerbate the divide between “haves” and “have-nots,” because they would only be available to the wealthy (Pew Research Center 2017b).

Noting broad-based public concern about the use of gene editing for human enhancement, a 2017 report from the U.S. National Academies of Sciences recommended that scientists and policymakers should facilitate ongoing input from the public regarding the benefits and risks of human genome editing and that more research was needed on how to effectively facilitate such a process (National Academies 2017). Studies also show broad-based belief among Americans that scientists should consult the public before pursuing gene editing applications (Scheufele et al. 2017).

Yet if scientists, engineers, university leaders, and CEOs are to address growing concerns about gene editing and other technological innovations, they will need to turn to novel approaches for engaging segments of the public from lower socio-economic backgrounds. Traditional science communication efforts that focus on informally educating the public by way of TV documentaries, popular science books and magazines, and science museums tend to engage the best-educated and highest-earning Americans who on average are the heaviest consumers of these resources, a group that tends to be already enthusiastic, knowledgeable, and optimistic about technological innovations.

A recent Pew survey (2017c), for example, finds that only about 17 percent of Americans are active news consumers, defined as those who seek out and consume science news at least a few times a week. This group tends to be on average better educated, higher wage earners, and predominantly white. In turn, attention to science news along with socio-economic status are the strongest predictors of whether an individual engages in other informal science education activities, such as attending a museum, taking up a science-related hobby, or participating in a citizen science project.

Such disparities in attention present major barriers to addressing public reservations and misconceptions. Consider past communication and outreach efforts related to nanotechnology. Between 2004 and 2007, as hundreds of nanotechnology-related products and applications were introduced into the U.S. marketplace, knowledge of nanotechnology increased substantially among the best educated but declined among the least educated. These disparities in knowledge occurred even as news coverage of nanotech increased and government agencies, science museums, and universities invested considerable resources in informal education and outreach activities.

This “knowledge gap” effect has been tracked by researchers across issues for several decades. As an emerging scientific issue such as nanotech, gene editing, or artificial intelligence gains news attention and is the subject of outreach at museums and other venues, those individuals who hold higher socio-economic status are likely to acquire knowledge at a faster rate than their lower status counterparts, so that the difference in knowledge between these segments will tend to increase rather than decrease.

The reason for these disparities is that better educated individuals tend to absorb new information more efficiently and can rely on their equally well-educated friends and family members to discuss and follow up on concepts they do not understand. As higher wage earners, they also possess the financial means and time to take advantage of high quality sources of news coverage and to attend science museums and similar cultural institutions. In 2012, 40 percent of Americans in the top quartile of wage earners said they had visited a natural history museum or a science center during the past year compared to less than 20 percent among those in the bottom quartile. The knowledge gap effect has even been observed relative to media outreach strategies such as Discovery Channel and National Geographic Channel programs that are intended to engage broader audiences who otherwise may never consume science-related information (Corley and Scheufele 2010; Nisbet et al. 2015).

Despite its popularity as a tool among scientists and their allies, social media are no panacea, and initiatives that invest heavily in social media outreach at the expense of other strategies may only reinforce disparities and divisions. According to Pew (2017c), a substantial proportion of social media users say that they incidentally bump into science news stories that they otherwise would not have sought out. But about twice as many social media users also say they mostly distrust rather than trust the science posts they encounter. This sentiment is in line with a growing skepticism of social media generally, and is confounded by the tendency for social media to facilitate the spread of misinformation, to foster incivility, and to inflame group based differences rather than transcend them.

Given public concerns about the role that scientific innovations will play in contributing to rising inequality, scientists and their partners must start to directly address these reservations. Traditional approaches to science communication will not be enough—nor will social media efforts—no matter how clever or well resourced. It is time to focus on novel methods for promoting a more fruitful dialogue about science and society, bringing scientists and people of diverse backgrounds together to spend time talking to each other, contributing to mutual appreciation and understanding, and forging new relationships and insights.