October 30, 2014 —Recent Pew Research Center studies offer valuable insight on the ideological makeup of those Americans most likely to voice their opinion in politics generally and the climate debate specifically, including the news sources they rely on to articulate their arguments.

What’s clear from the Pew findings and related research is that the highly selective media habits of strongly conservative and liberal Americans are likely to be a major barrier to charting a path to progress on our tough, new planet.

In a June 2014 study, Pew found that the approximately 1 in 5 Americans who score as either consistently conservative (9%) or consistently liberal (12%) in their answers to a variety of questions, are far more likely to vote than other Americans and are at least twice as likely to volunteer for a campaign, contact an elected official, or donate money.

Consistent liberals and conservatives are also more likely than those with moderate opinions to view the opposing party negatively. Half of all consistent liberals and 2/3 of consistent conservatives believe that the policies of their partisan opponents are “so misguided that they threaten the nation’s well-being.” These feelings of extreme antipathy towards the other side are a major factor motivating their higher levels of political participation. 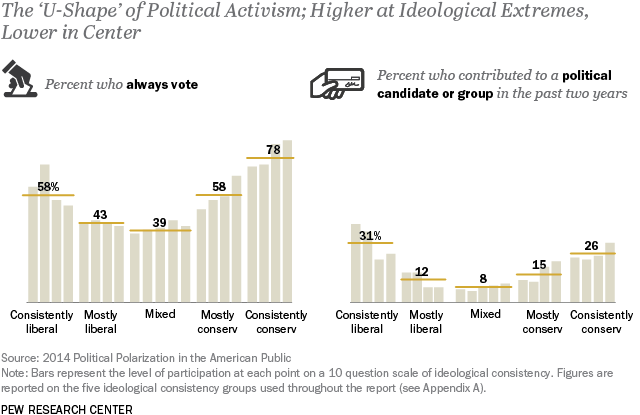 Yet the tendency of politically active liberals to rely on left-leaning outlets like MSNBC as news sources is likely to have other under-examined distorting effects on their climate change-related opinions and beliefs. These include at least four important impacts:

1. Misplaced hope in renewables. Many liberal commentators tend to focus on just a handful of policy actions and technologies to address climate change, advocating for example a carbon tax and renewable energy sources while dismissing nuclear energy or carbon capture and storage. Liberal audiences may therefore have a skewed outlook on what it will take to reduce greenhouse gas emissions while meeting the global demand for economic growth. (See for example these recent headlines.)

2. Extreme weather fears. To the extent that left-leaning news sources play up the catastrophic consequences of climate change, as a recent study of international outlets suggests, or present “Franken-storms” like Hurricane Sandy as the new normal in a warming world, their audiences are likely to have a faulty perception of the causes and incidence of these events. Such portrayals may also promote feelings of hopelessness, fatalism, and avoidance.

3. No compromise with conservatives. As Duke University’s Frederick Mayer describes in a 2012 paper, among common narratives offered about climate change, MSNBC tends to emphasize what Mayer calls the “Denialist Conspiracy,” accounting for 23 percent of the story lines at the network, far more than any other cable news outlet.

Playing to the intense antipathy that liberals feel for conservatives, this conflict-focused narrative emphasizes that “a shadowy network of oil-funded front groups and the politicians they control (the villains) mislead the gullible and the religious to subvert progress on climate change. Those who expose the conspiracy are the heroes. The moral of the story: opponents of acting on climate change are either corrupt or deluded,” writes Mayer (Watch example).

Even in covering the release of major scientific reports, at MSNBC such moments were “less a hook for telling the environmental story than an opportunity to bash the right,” writes Mayer.

“The closest thing I know of as a way to goose my own ratings is to showcase some villainous behavior from a media figure on the right,” admitted MSNBC host Rachel Maddow in a 2010 speech. “The numbers rise then because there is an appetite for hearing that media figures on the right are terrible people doing terrible things.”

Fed a steady stream of arguments at MSNBC and other liberal outlets asserting the cynical and deceitful strategies of conservatives and their industry allies, politically active liberals are likely to believe that any efforts at negotiation or compromise with conservatives in the climate debate are either hopelessly misguided or motivated by the hidden influence of the fossil fuel industry.

When asked generally about policy disagreements with Republicans, according to Pew, consistent liberals believe that President Obama should give little to no ground, a disdain for compromise equivalent to that of their conservative counterparts.

4. Amplification via social media. As liberal groups and like-minded peers flood social media with links to MSNBC segments and other liberal media accounts, exposure among liberals to arguments exaggerating the potential of renewable energy, emphasizing extreme weather events, and stoking anger over conservative “denialists” are only likely to be amplified.

On this possibility, the Pew analysis finds that consistent liberals rely in greater proportion than other audience segments on Twitter and Facebook as news sources, pay closer attention to political posts at Facebook, and are more likely to follow via Facebook issue-based groups. Consistent liberals are also more likely than others to block or defriend someone because they disagree with their views. 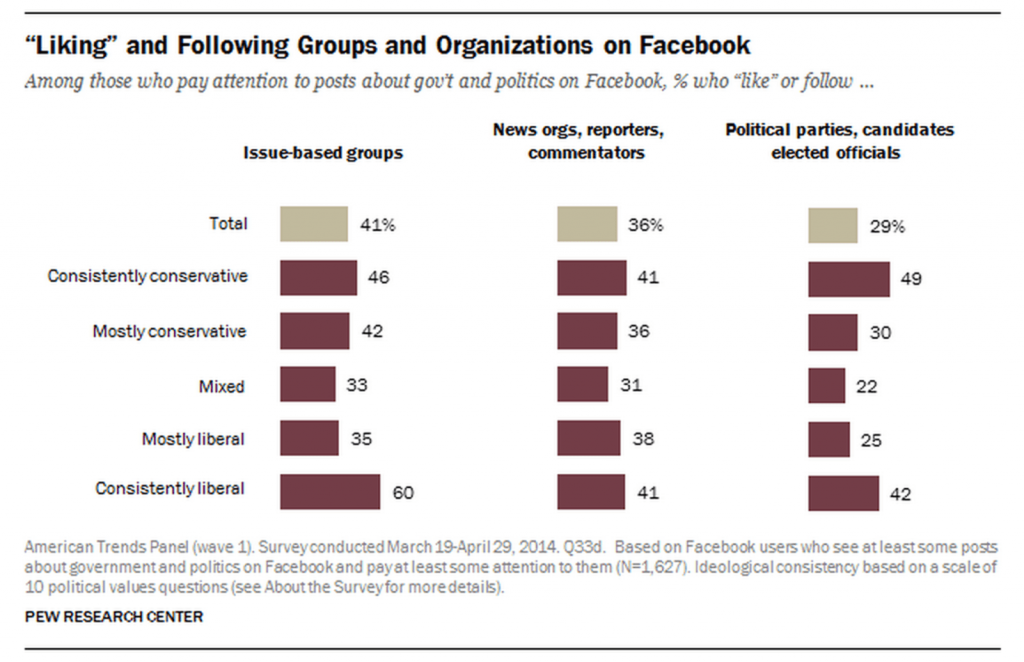 To be sure, the strong reliance by conservatives on Fox News will continue to be a major obstacle to progress on climate change and should be a subject of extreme concern.

Yet the more subtle, less examined impact of left-leaning media on politically active liberals – including activists and donors among their ranks – deserves serious attention, even if for many of us such possibilities are inconvenient to consider.

–This article originally appeared at The Conversation US.