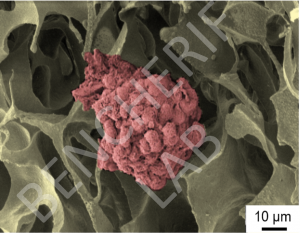 Two-dimensional (2D) cell cultures growing on plastic do not recapitulate the three-dimensional (3D) architecture and complexity of human tumors. Recently, Multicellular Tumor Spheroids (MCTS) aimed to reproduce the 3D architecture of solid tumors and fill the gap between monolayer cultured cells and animal models. These 3D MCTS cultures were set up either as free-floating, microencapsulated into inert non-porous hydrogels, or embedded in mechanically-instable ECM. These methodologies lack either a physiological context and/or reproducible format for assessing tumor cells in vitro.

To overcome these limitations, our team has developed a new 3D culture tumor model taking into consideration both the need to have a mechanical support around MCST, a biomimetic matrix enabling local cell remodeling, and the presence of interconnected macropores. This unique macrostructure allows cells invasion and trafficking into the surrounding matrix but also enables physiological gradients for nutrients, oxygen, pH, and catabolites.

Based on a combination of MCTS, generated with a new technique allowing a better control over spheroid dimensions and uniformity, and their integration into macroporous 3D biomimetic scaffolds, we created a more realistic in vitro 3D tumor model.

Through tissues, organs, cells and number of molecules, the immune system acts as the defense system of your organism to fight cancers, infections and other diseases. Indeed, immune system keeps track of all the substances normally found in your body, and when it identifies a new substance, it will raise an alarm signal then attack and kill anything containing this foreign substance such as viruses, bacteria or cancer cells. Moreover, due to a unique capability to learn and memorize, your immune system will be faster and more efficient after a second exposure to the same foreign substance, which is the basis of vaccination.

However, the fight against cancer remains a challenge because cancer cells are able to hide from the immune system. Over 21,7 million of new cancer cases are expected to be diagnosed in 2030, and it is predicted that over 13 million people will die of cancer this year. Thus, one of the strategies to reverse the situation is immunotherapy. This involves boosting your own immune system to defeat cancer by either stimulating it to work harder and smarter to attack cancer cells, or by giving it new tools such as synthetic proteins to better fight cancer. Although current immunotherapy strategies have finally reached the clinic, they only showed a modest increase of the overall survival rate suggesting the need to develop new alternatives to treat cancer.

Our laboratory is developing innovative strategies to quantitatively control immune cells recruitment and activations to both develop new immunotherapies approaches and to better understand the influence of the microenvironment on the immune system. To this end, we developed biodegradable and highly porous cryogel scaffolds made from FDA approved naturally derived polysaccharides, that can be injected subcutaneously into the body and serve as “training camp” platform for immune cells. Indeed, these unique hydrogels are designed to specifically recruit and stimulate dendritic cells (DCs) in situ, which are sentinels cells responsible of the detection of foreign agents before migrating to the Lymph node – the immune system headquarters – in order to activate T cells. Thus, by recruiting DCs within these new biomaterials thanks to recruiting factors and programming them via antigens in synergy with danger signals or adjuvant, they will be able migrate from the biomaterials to the lymph nodes in order to stimulate tumor-specific T cells to induce an effective, robust, and long-lasting immune response against cancer cells.

Make an impact in our research today!

Our laboratory accepts philanthropic donations. All financial contributions are tax-deductible.