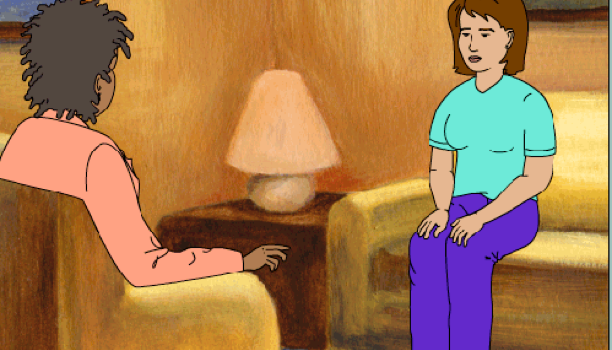 Interactive Pedagogical Dramas are compelling interactive stories that have didactic purpose. Autonomous agents realize the characters in the drama, which unfolds based on user interaction.

ISolve, depicted above is an interactive AIDS prevention game where people can practice social skills aimed at avoiding risky behaviors including unsafe sex.

Below is Carmen’s Bright Ideas, an interactive drama designed to help mothers of pediatric cancer patients. (Note these are all screen captures of the running program that have reduced frame rate and also require particular codecs to be installed as noted).

The above clip is an example of Cerebella performing nonverbal behavior generation and listening behaviors just using the analysis of the utterance text and audio.

•Opening dialog between Carmen and a health care professional (30meg)

•Opening dialog between Carmen and a health care professional (15meg)