Research in the Trussell Lab is focused on the ecology and evolution of marine communties, in particular the role of species interactions in shaping communities. This work involves laboratory projects and field research that spans the breadth of habitats in the Gulf of Maine. We work on rocky shores, tidal rivers, and estuary habitats. See the People pages for more information on individual projects.

1). Factors affecting the relative importance of nonconsumptive predator effects and trait-mediated indirect interactions Our previous work has shown that water-borne chemical cues released by the invasive green crab (Carcinus maenas) can strongly influence the foraging decisions of consumers (such as Nucella lapillus) that are know to importantly influence rocky shore community structure. Virtually all prey face a trade-off between the benefits of foraging (energy acquisition) and its costs (increased vulnerability to predators). Hence, prey often reduce foraging activity in the presence of predation risk which can transmit a positive indirect effect (a trait-mediated cascade) on prey resources like barnacles. Such cascades are thus analogous to those driven by “classical” cascades except that they are driven be fear of being eaten rather than being eaten. We have shown that the strength of trait-mediated cascades are often just as strong if not stronger than density-mediated cascades and that the relative importance of each depends on a number of factors including resource identity and the availability of refuges. Our current research, funded by NSF and in collaboration with Barney Luttbeg, examines the role that resource levels and prey state play in foraging decisions under predation risk and their influence on the strength of trait-mediated indirect interactions.

2). The link between the ecology of fear and ecosystem function As part of our ongoing work on nonconsumptive predator effects, recent experiments have indicated that these effects may go beyond those on prey behavior and foraging behavior. For example, we have found that the effects of predation risk may strongly influence ecosystem functions such as energy transfer. This effect can emerge because predation risk reduces the growth efficiency of prey. In other words, the fear of being eaten reduces the amount of trophic biomass that prey are capable of producing via growth relative to that which they consume. We think these results may also help to explain Elton’s classic observation that many ecological food chains are short that predation risk may provide a biological explanation for why ecological food chains are predominantly short. We have also examined how other factors may influence the effects of predation risk on growth efficiency and have found that the identity of basal resources (mussels vs. barnacles) can be quite important to this dynamic. For example, when mussels are the basal prey, these effects are much weaker and we suspect that the increased habitat complexity they create may diminish the “stress” that predation risk imposes on intermediate consumers. 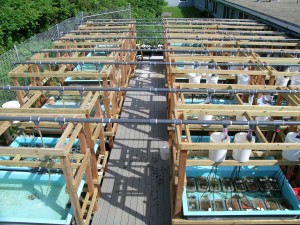 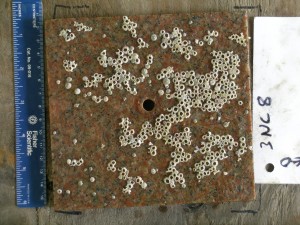 When there is no predation risk, Nucella consume lots of barnacles 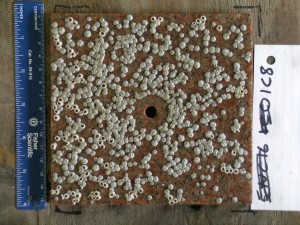 3). Biogeographic variation in community recovery and community assembly rules Over the past 5+ years, in collaboration with my former PhD student, Elizabeth Bryson and Dr. Pat Ewanchuk, I have been examining how Gulf of Maine (GOM) rocky intertidal shores recover from experimentally applied disturbances with a focus on how consumers, recruitment variation and oceanographic processes influence community recovery. This work was inspired by my earlier collaboration with Mark Bertness (Brown University) on alternative stable states in the GOM. The results of our current project indicate that despite involving many of the same species, patterns of succession in the northern and southern GOM are dramatically different from on another. In short, the rules revealed by Lubchenco and Menge’s classic work in the southern Gulf do not explain dynamics in the northern Gulf. The mechanisms responsible for these difference recovery patterns were the focus of Liz’s PhD research. 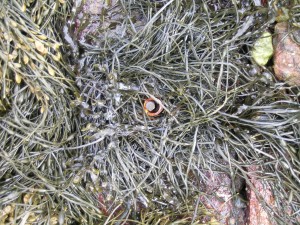 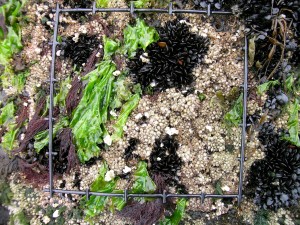 Some communities rapidly develop a patchy, mosaic structure after disturbance 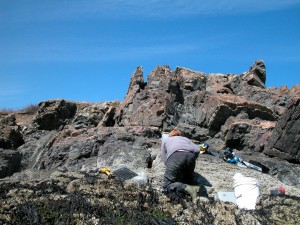 Liz Bryson cranking away in the field

4). The evolutionary and ecological significance of inducible defenses                 I originally pursued my interests in the evolution of inducible defenses with early studies on morphological plasticity in the snail Littorina obtusata. This snail has an interesting history. Classic work by Robin Seeley found that historical increases in the shell thickness of this snail were correlated with the arrival of the green crab on New England shores in the early 1900’s. These transitions were interpreted as evidence of rapid evolution via natural selection because thin-shelled snails are more vulnerable to green crab predation than thick-shelled individuals.

Our work suggests that plastic changes in snail shell thickness may have also contributed to these transitions. By raising snails in the presence and absence of green crab risk cues, we found that snails can produce changes in shell thickness over 90 days that are comparable those documented by Seeley. We suggest that natural selection on reaction norms in shell thickness rather than on “thickness genes” per se may be the principal mechanism accounting for both historical and geographic variation in shell thickness. Recently, Tim Edgell and I, along with other colleagues, conducted induction experiments with snails from three biogeographic regions (the United Kingdom and the northern and southern Gulf of Maine) having different green crab invasion histories. We examined geographic variation in the plasticity of retraction behavior and shell thickness. We are still working up the thickness data but our data on retraction clearly show that this behavior is more strongly canalized in snails having a long history with the green crab (i.e., the UK) and more plastic in those where the interaction history between this two species in much shorter (i.e., the northern Gulf of Maine). 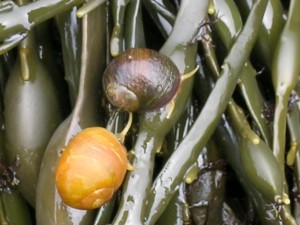 The herbivorous snail, Littorina obtusata, has served as an excellent model for our studies on inducible defenses 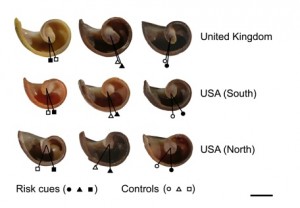 This figure is from our recently published paper in the American Naturalist (Edgell et al. 2009) on how inducible changes in retraction behavior vary with geographic variation in the contact history between Littorina obtusata and the invasive green crab, Carcinus maenas