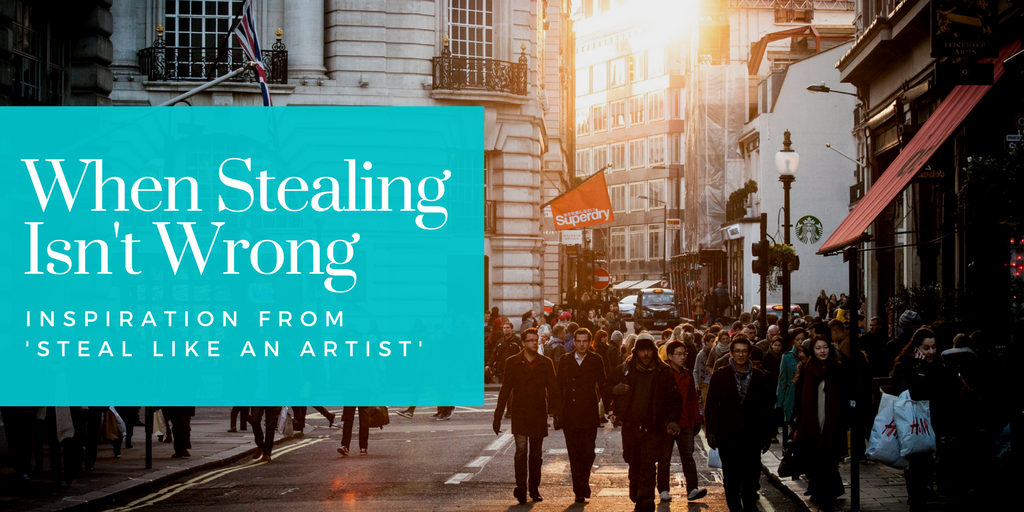 Time and time again we are told to be original. We want to come up with a new idea, creating the next ‘big thing.’ But Austin Kleon, author of “Steal Like an Artist” poses a different theory. What if being original is overrated? What if it isn’t even possible? What if the answer is, instead, to steal from the greats?

The basis of this belief is that nothing is original. Everything is inspired in part my something else. It’s either a mashup of two, three, or more different things, or a somewhat new idea combined with an old idea.

It’s not meant to be discouraging, however. The idea is that instead of focusing on creating something entirely new, focus on what can inspire you. As Kleon says, “if we’re free from the burden of trying to be completely original, we can stop trying to make something out of nothing, and we can embrace influence instead of running away from it.”

Looking up the Family Tree

The way in which you use these inspirations’ work is also important. First and foremost, never actually steal their work verbatim. That’s plagiarism, and that’s bad. But beyond that, don’t even steal their style. Rather, steal the thinking behind the style, and apply that thinking to creating something completely yours.

Another way to keep inspired is to keep a “swipe file,” or a collection of things you find interesting but aren’t going to use now. You never know what is going to be useful for you later, or even how things that are interesting now can develop into fantastic ideas later once you let them marinate for a bit.

A piece of advice Kleon also gives is to step away from the screen when you need to get extra creative. It’s much harder to eliminate something this way. If you are writing something down on a computer you can easily backspace, erasing the thought forever. If you are editing on paper though, you can cross something out, only to realize on the second pass that the original thought was actually onto something.

You’ll have a place where your ‘failures’ will live, and it’ll be easier to realize that they might not all have turned out to be failures after all.

When looking for more inspiration, Kleon also encourages practicing productive procrastination. While the initial reaction might be to think that focusing on one thing in particular will make you more successful, as your entire energy is focused there, that is not the case.

Kleon instead promotes the idea of having lots of side projects you can bounce between and giving yourself the time to be bored. Make sure to engage with all of your passions, not throwing some away, thinking there isn’t enough time for them, because passions can bleed into other areas of interest and work.

Equally as important throughout all of these tips for getting creative is to avoid judgment. Whatever you end up doing, even if it’s your ugly first draft, don’t judge your work.

That’s part of the appeal of obscurity, Kleon points out. While it can feel frustrating when you are making great content and few are able to appreciate it, obscurity means you can afford to make more mistakes. When you don’t look for validation from external sources, you are able to get more creative and stay true to yourself.

While you shouldn’t judge yourself, Kleon suggests restricting yourself. When you are feeling stuck, or feeling like you aren’t as creative as you have the potential to be, pick what to leave out. The way to get over the creative block is to place constraints on yourself. With less stress about having the possibility to do everything, you can focus on creating something great.

On top of putting restraints in place, when you do create something, figure out what to take out. By forcing yourself to be more concise, you are forcing yourself to put more power in what you have to say. When you take something that is said in 100 words and make it said in 10, you are giving more value to those words. As Kleon says, “it’s often what an artist chooses to leave out that makes the art interesting.”

Stealing in the traditional sense is wrong. But when stealing really means taking something that inspires you and changing it to mean something unique to you, then it’s completely acceptable. Most works of art can be pinpointed to others, whether it is a traditional piece of art, music, or writing. So don’t stress over creating something that has never been done before – instead, steal like an artist.