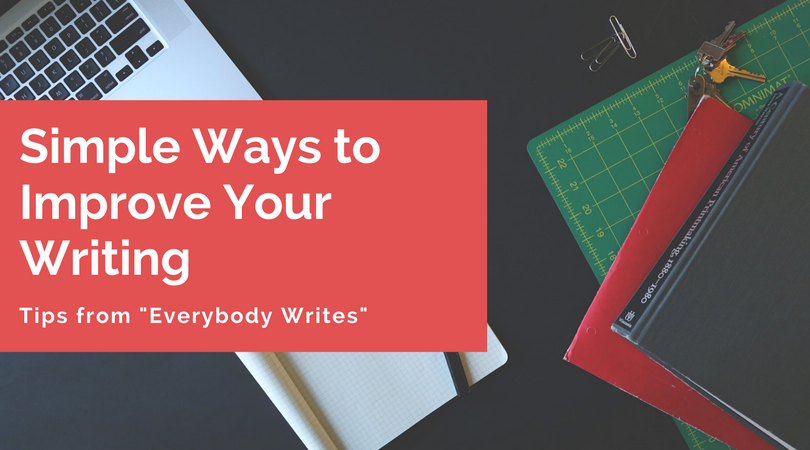 People who write well are, at times, seen as idols. Writers like Shakespeare, Wilde, Austen, Bronte, and Poe are believed to have been gifted the ability to turn a phrase, to make language come alive, to create outstanding works of art. But according to Ann Handley in her book “Everybody Writes,” this is not the case.

While yes, these authors are amazing, they weren’t gifted a divine talent only few can accomplish. Writing is a skill, one that is developed and cultivated with time. One that, with the right guidance, can be improved. In her book, Handley outlines suggestions to help everyone improve their writing, in many different ways.

One of the most prominent ideas Handley reinforces in Everybody Writes is that people are not born with the ability to write artfully, they achieve greatness through practice.

There are many things that stop a potential writer from achieving their goals: fear, lethargy, and a lack of confidence or knowledge. But what’s important is embracing the idea that it’s okay to be absolutely horrible your first time out. No one expects the first time you pick up a basketball to be Michael Jordan, so why should you expect yourself to be Shakespeare when you begin writing?

How do you practice writing? As simple as it seems, just sitting down for a short time each day. As Handley says, “writing is a habit, not an art.” So while it might seem intimidating, the first step is to sit down and do it poorly. Because in the future, chances are, your writing will have improved.

Make sure also when practicing that you do it consistently in short bursts rather than sitting down one weekend and writing for hours. A little bit each day will build a skillset that will help you improve. For marketers interested in content development this is also the best strategy, as with blogging half of the battle is consistency, which writing a little bit each day will help build.

As Handley says: “Simply put, the key to being a better writer is to write.”

So you want to write and know that you are going to write more to write well. But how do you begin? According to Handley, the next step is to plan and plan some more.

The concept is that if you want to write a specific idea, like a blog post, writing a stream of consciousness will result in some key ideas being missed. But if you sit down and loosely outline what points you want to hit, when you actually go to write you’ll be better equipped to be on track. Figure out what it is you want to say before you say it.

However, when it comes to writing the first draft, just go for it. Follow your plan, yes, but don’t stress over how well written it is. The most important part is getting your ideas down.

Handley calls this the “Ugly First Draft.” One of the hardest parts of writing is starting, so getting down your thoughts, no matter how poorly written you may think they are, will help you to later. It is much easier to make edits on something that is already written than to write from scratch. Handley points out, “very often, the people you think of as good writers are terrible writers on their first drafts. But here’s their secret: They are excellent editors of their own work.”

For those who also struggle getting started, Handley has a trick: starting with ‘Dear Mom,’ or, for those writing to a customer, ‘Dear Customer.” A point brought up is that more often than not writer’s block is based on the fear of starting. Where do you start? Opening sentences are important, what if you write the wrong thing? By starting with a ‘Dear Mom’ you are no longer looking at a blinking cursor on a blank page, and you picture someone on the other end of your writing. This, in turn, relaxes the way you write and makes you more natural.

Speaking of opening sentences, these and the closing sentences in your writing are some of the most important sentences in your piece. This is your opportunity to hook a reader, to compel them to read more, and to empower them to take action at the end. Once your Ugly First Draft is completed, and edits have been made, make sure to go back and determine if these two sentences could be improved at all to pack a bigger punch.

For the entirety of the piece, however, Handley has more suggestions for improving the quality of writing. One of the rules that has made appearances in many of Handley’s books is the idea of not telling the reader something, instead of showing them it. Great content isn’t something that is pushed on the reader. Instead, especially for marketing copy, the idea is to “explain in human terms how [your product] adds value to people’s lives, eases troubles, shoulders burdens, and meets needs.” If you just tell a reader that something is going to make their life easier without showing them how, why would they believe you?

But it’s important that while doing this, you also keep your writing simple. More often than not you are writing for the average person. And while you may think that you sound smarter when you use larger words and acronyms not everyone may actually know, you are actually making your writing harder to read. At times downright confusing. These things don’t encourage a reader to keep going – it makes them stop and find something else. A tip from one of Handley’s journalism professors? “Assume the reader knows nothing. But don’t assume the reader is stupid.” Have this in your mind, and use this as a guiding principle.

One of the most difficult parts I find in writing is the grammar aspect to it. Once I get into a groove, I can have my words flow, without a doubt my favorite part of writing. Going back and editing them to see if they make sense? Less fun. Thankfully Handley goes over some of the trickiest parts of grammar, and writing as a whole, and gives tips as to how to remember them moving forward.

Some of the hardest parts of grammar are figuring out the word or words to use when people infrequently use the incorrect ones. The ones I struggle with the most are i.e. vs. e.g., and who vs. whom.

When it comes to e.g. vs. i.e., I can say with honesty that I have used i.e. nearly every time. Turns out that I was using it incorrectly nearly every time. Handley describes the difference easily – e.g. is when you are giving an example (e.g. starts with ‘e,’ as does ‘example’) while i.e. is used for clarification. So what would that even look like? For e.g. you would say something like: I love the clubs Northeastern University offers, e.g., NUMA, Supply Chain Club, Entrepreneurship Club. Here e.g. is being used because you are listing examples of Northeastern clubs. Comparatively, i.e. would be used when you are specifying something, for instance:  I’m involved in the best club Northeastern University has to offer, i.e., NUMA. Here you are clarifying with the reader what the best club is.

Who vs. whom is equally difficult, but Handley also provides tips. The trick for who vs. whom requires a bit more thought, but makes it much easier to remember the correct usage. ‘Who’ should be used when the word is the subject of the verb, while ‘whom’ should be used when the word is the object of the verb. A way to remember? Handley says that a “good grammar hack is to substitute he and him to see whether you should use who or whom; he would pair with who and him would pair with whom.” If you remember that the two that end with the letter ‘m’ match, it makes substituting to check that much easier.

And finally, the grammar issue that I struggle with most of all: passive voice. While there is nothing grammatically incorrect about using passive voice, it makes your writing that much more flat. By contrast active voice livens up your writing, and makes the reader that much more excited to read on. Handley gives more detail on passive voice, saying that “passive voice does not mean the past tense. Rather, passive means that something is being done to something, instead of that something doing the action on its own.” To give an example, rather than writing ‘the blog was written by Katherine,’ it sounds much better to say ‘Katherine wrote the blog.’ Here I am doing the action (writing the blog), rather than having the action done to me. Eliminating passive voice helps improve your writing, making it not only more alive, but less awkward.

Ann Handley’s “Everybody Writes” is a great starting point for people that want to practice an important skill in life. Writing isn’t a magical gift that people are born with. It’s a skill that is practiced, and through that practice people become great writers. Whether the goal is to work on your new novel or even just craft the perfect email, learning the fundamentals of writing and ways to improve will always come in handy.