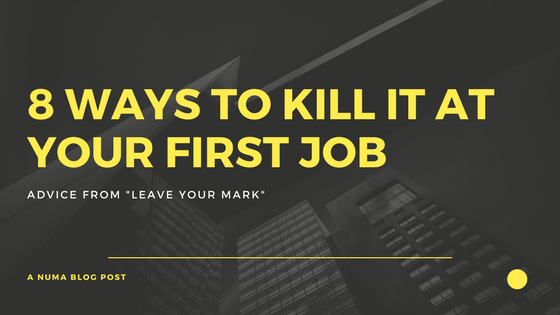 Figuring out what you want to do in life when you’re in your twenties is never an easy task. Just ask Aliza Licht, author of “Leave Your Mark.” She didn’t realize she wanted to go into the fashion industry until after completing most of her biology degree. After putting in lots of hard work and many jobs later, Licht built her own way, creating an award-winning Twitter handle and is currently acting as Alica + Olivia’s EVP Brand Marketing & Communications. Her path wasn’t always an easy one, but Licht found that leaving your mark on everything you do is an important necessity for success. Below are strategies she used to not only survive, but thrive, in her career.

While surviving through a job search is something to be celebrated by itself, the work doesn’t stop there. It’s important that once you get hired, you research everyone and everything. Look into your employers before you start, especially the people you will be working closely with, as well as anyone mentioned on the website or whose information is made public.

As Licht says, “there is no excuse for not knowing who the CEO of a company is – when you end up in the elevator alone with him, you don’t want to mistakenly ignore him.” There are people who you won’t be introduced to your first day in an entry-level position, but it is still your job to know who they are.

On top of this, you will be introduced to a lot of people early on, and expected to remember their names, so knowing as many people on your team beforehand is a huge advantage. While people are understanding, especially early on, the more people you ‘know,’ the more comfortable you’ll be, and the more adapted you will seem.

This logic also applies when going to conferences and events. Whenever possible, know the players in the game beforehand. If there is a speaker you are particularly interested in, make sure to be able to recognize them. People are usually clamoring to talk to inspiring speakers after their speeches, but not as many will be able to identify them before to talk to them about their work. Give yourself the advantage and be one of those people.

Clean Up Your Social Network

Although at times it feels as though it’s been said a million times, it bears repeating that keeping your social media channels cleaned up and appropriate is an absolutely necessity.

As Licht states, “the lines have been blurred between what is personal versus what is professional. If you want to post questionable pictures on your social profiles, then you better make sure your accounts are private.”

But remember that it is better to be safe than sorry. Something you might think is private, or anonymous, always runs the risk of being found out. Something as simple as privacy settings being updated without your knowledge can result in your private posts becoming public.

Whether or not you think it is fair that you can be judged on your online presence outside of work doesn’t change the fact that being careless can cost you a potential job, or even the job you are currently in depending on what is being posted and shared. When in doubt, hold back from sharing.

Even if you get the job of your dreams, it doesn’t mean the work is done. In fact if anything, the hard work is just getting started.

Your first job is your first real opportunity to show that you are going places. You need to use this job to prove that you are willing to put in the work and that you will be a person worth teaching, mentoring, and promoting in the future.

Licht advocates for being “enamored with everything.” This means that you recognize that you are having your first big break, and you are excited to show you deserve it. Therefore you do things like being the first to arrive and the last to leave. You don’t sit around without anything to do (see below about making work for yourself). When your boss doesn’t have work for you, you ask your colleagues if there is anything you can do for them.

On top of all this, whenever possible it’s important to anticipate your boss’s needs. Figure out what logically would be the next task completed, and get it done. This way, when your boss asks you to complete the task, you can tell them you already have it handled.

Most importantly, make sure your attitude is positive. You should be showing everyone you work with that you care, and that you are excited to show up to work each morning. As Licht says, “a great attitude is one of your most marketable skills,” so make sure you don’t miss out on the opportunity.

If you have questions, don’t be afraid to ask them. Licht describes an experience she had where she didn’t gain clarification on a task and faced the consequences because of it.

In fashion magazine offices there is usually a closet where product is held. Magazines loan out product from brands (i.e. a Chanel purse) to be used in shoots and are stored in one central place.

When Licht was working at one of her jobs, an aspect of it was keeping the closet organized. The problem? It was a complete organizational disaster. On a Friday afternoon, her boss asked if she could organize it for the upcoming week, a task that would take hours. Licht said she would, and her boss went home.

When Licht went to the closet she realized that she could not finish the task by Monday without staying late. So Friday night, all day Saturday, and all day Sunday, Licht spent hour after hour organizing the closet so by Monday it was perfect. Her boss Monday morning came back and was amazed by how organized it was. The only problem? When she asked Licht to organize it, she didn’t mean it had to be done Monday morning, but rather by the end of the week.

While Licht, in a sense, went above and beyond, she also unnecessarily created a problem for herself, as she spent every minute of her weekend at work cleaning up.

Licht recommends a smarter way of asking questions. She says to always make an effort to answer the question before asking. For instance, if asked to deliver something at Company X, instead of asking your boss where Company X is, Google the address and then say ‘[Boss], I just wanted to double check, you wanted that delivered to [insert address], correct?’ This shows that you are making an effort, and not wasting your boss’s time.

Finish Your To-Do List, and Then Get More To Do

Even if your job isn’t exactly what you want, get your work done well and quickly, and then help people working the types of jobs you want with their work. At Licht’s first job, she was selling advertising work for a newspaper. While this is not what she wanted to do long term, she recognized that everyone has to start somewhere. She also recognized, however, that if she wanted to break into the fashion industry, she needed to pick up some relevant experience.

So what did she do? When she finished the work necessary to her job and went to find more work. As she puts it, “even though I was technically an ad sales intern, I offered to help [the editorial department] any way I could once my own work for the day was done.”

This way she expanded her job from an ad sales intern to an intern servicing the entire newspaper. She was able to gain skills relevant to what she wanted her future to be, so when she applied for her next internship her resume had more in-demand skills for the position. What’s important to remember is not to get discouraged if a job isn’t exactly what you hoped for – instead, make it what you want it to be.

Help People Imagine You in Roles

A book written by someone so prominent in the fashion industry would be remiss without some fashion advice. Licht’s contribution? Recommending you dress the part, to the point of creating a signature look.

While it may not seem fair, it’s a truth that more often than not the shy girl in the back isn’t pictured making the big and important presentations. But that doesn’t mean she should be counted out. Licht says “if you want people to imagine you in certain roles, you have to help them see you that way. If you want to be asked to give that presentation, make sure people know you have a voice. And even if you’re truly uncomfortable having a voice, it’s OK to force yourself through it.”

This means doing what you can to project confidence, and part of that is feeling like you are important. As Licht says, “if you walk into a room like you own it, people will believe that you do.” While this comes with a caution against coming across as cocky, having confidence is a must.

A way Licht recommends this is by establishing a ‘look,’ one that gives you confidence and can help you convey a certain image. For instance, Licht herself has rocked red lipstick for as long as she can remember. When she puts it on she feels confident, and that confidence is then projected. By establishing a signature ‘look’ you can become more memorable, while at the same time giving yourself that extra push that can make all the difference.

Understanding When You Deserve a Promotion

You get this by doing more work than expected, better than expected. You are taking on projects that aren’t necessarily required, and doing a great job on them. You are making yourself irreplaceable. You want your boss to be afraid of the idea of you leaving because the very idea of replacing you is terrifying. You are making strides, churning out great work, and a joy to have around the office.

If you aren’t doing this, you don’t deserve a promotion. Promotions aren’t given out based on the number of years you’ve worked at the company as much as they are the amount of work you’ve contributed. Before you go and ask for a promotion, make sure you have an idea of the work you’ve contributed to the company – and if not, work on gaining some experience before talking to your boss.

Write a Bio for Yourself

A technique Licht recommends for making sure you are on track in your career is to write a short biography of yourself. In less than 500 words, talk about where you are in your life and how you got there.

Once you have it written, read it over as objectively as you can. Do you like you? Are you impressed by what you’ve done? Is this the story you want being told about you? What changes would you make? Do you need to start doing something? Stop doing something?

Use this bio as a launching point. Figure out what changes need to be made to have the story you want told being shared. Figure out what is necessary to get to the point where you are where you want to be and go out and do it. By having it written down, you will be able to more easily see what you can do to reach your goals.

Your first job is a fantastic opportunity to make a difference in your career. It’s the time in your life where you are beginning. You are able to be a sponge, learning new things and meeting interesting people that will have an impact on your career and life for many years to come. Make sure that you use the opportunity to launch yourself as far as possible, and, above all, to leave your mark.