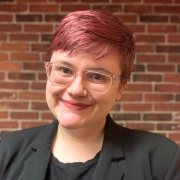 This post is written by Katie and Megan Woods, recent Northeastern graduates of the Masters of Arts in History with a Concentration in Public History program. To commemorate the Centennial of the ratification of the 19th Amendment, the NULab for Texts, Maps, and Networks along with the DH Hub, the Digital Scholarship Group, and the  Continue Reading »

Viral Texts at ACH2019: The Reprinting of Fiction in American Periodicals

The Association for Computers and the Humanities conference that was held in Pittsburgh last July was an incredible event. Having the opportunity to present the research that I have been working on through the Viral Texts project was really exciting professionally, and it gave me the opportunity to speak with other academics whose work I’ve  Continue Reading »

As a 2018–2019 NULab Fellow, I worked with the Early Caribbean Digital Archive (ECDA) to investigate disability and slavery in eighteenth- and nineteenth-century texts, studying how we can read, represent, and understand this complex history. The ECDA focuses on decolonizing the archive through remix and reassembly, using the affordances of a digital archive to create  Continue Reading »

Commencing the DH Open Office Hours for this academic year, Melissa Schlecht—a NULab/DSG Visiting Scholar from the University of Stuttgart—presented her project, “Eruptive Art: The Depiction of Atmospheric Anomalies after Major Volcanic Eruptions in American Artworks of the 19th Century.” Inspired by a 2004 article by Norwegian astronomer Donald W. Olson which proposes that  Continue Reading »

No comments by Laura Johnson