Limb regeneration is possibly the most extreme example of regeneration among vertebrates. If an axolotl limb is amputated at any level, the missing portion regenerates in near perfect fashion within months. Click below to view a time-lapse movie of a regenerating axolotl leg.

Our research aims to understand this process at the most fundamental levels. What cells make up a regenerating limb and how do they know how much and what to regrow? What tissue interactions drive limb regeneration? Are there unique regeneration-specific gene expression programs that regulate limb regeneration?

One driving question in the lab is to explain why a limb will not regenerate if the limb’s connection to the nervous system is severed. Although it has been known since 1823 that the limb only regenerates if the nerve supply is intact, the mechanism by which nerves support regeneration is still poorly understood. 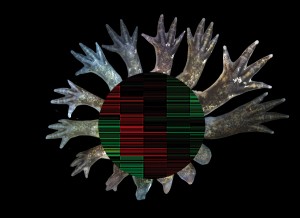 ABSTRACT
Salamander limb regeneration is dependent upon tissue interactions that are local to the amputation site. Communication among limb epidermis, peripheral nerves, and mesenchyme coordinate cell migration, cell proliferation, and tissue patterning to generate a blastema, which will form missing limb structures. An outstanding question is how cross-talk between these tissues gives rise to the regeneration blastema. To identify genes associated with epidermis-nerve-mesenchymal interactions during limb regeneration, we examined histological and transcriptional changes during the first week following injury in the wound epidermis and subjacent cells between three injury types; 1) a flank wound on the side of the animal that will not regenerate a limb, 2) a denervated limb that will not regenerate a limb, and 3) an innervated limb that will regenerate a limb. Early, histological and transcriptional changes were similar between the injury types, presumably because a common wound-healing program is employed across anatomical locations. However, some transcripts were enriched in limbs compared to the flank and are associated with vertebrate limb development. Many of these genes were activated before blastema outgrowth and expressed in specific tissue types including the epidermis, peripheral nerve, and mesenchyme. We also identified a relatively small group of transcripts that were more highly expressed in innervated limbs versus denervated limbs. These transcripts encode for proteins involved in myelination of peripheral nerves, epidermal cell function, and proliferation of mesenchymal cells. Overall, our study identifies limb-specific and nerve-dependent genes that are upstream of regenerative growth, and thus promising candidates for the regulation of blastema formation.

ABSTRACT
Microarray analysis and 454 cDNA sequencing were used to investigate a centuries-old problem in regenerative biology: the basis of nerve-dependent limb regeneration in salamanders. Innervated (NR) and denervated (DL) forelimbs of Mexican axolotls were amputated and transcripts were sampled after 0, 5, and 14 days of regeneration.
RESULTS
Considerable similarity was observed between NR and DL transcriptional programs at 5 and 14 days post amputation (dpa). Genes with extracellular functions that are critical to wound healing were upregulated while muscle-specific genes were downregulated. Thus, many processes that are regulated during early limb regeneration do not depend upon nerve-derived factors. The majority of the transcriptional differences between NR and DL limbs were correlated with blastema formation; cell numbers increased in NR limbs after 5 dpa and this yielded distinct transcriptional signatures of cell proliferation in NR limbs at 14 dpa. These transcriptional signatures were not observed in DL limbs. Instead, gene expression changes within DL limbs suggest more diverse and protracted wound-healing responses. 454 cDNA sequencing complemented the microarray analysis by providing deeper sampling of transcriptional programs and associated biological processes. Assembly of new 454 cDNA sequences with existing expressed sequence tag (EST) contigs from the Ambystoma EST database more than doubled (3935 to 9411) the number of non-redundant human-A. mexicanum orthologous sequences.
CONCLUSION
Many new candidate gene sequences were discovered for the first time and these will greatly enable future studies of wound healing, epigenetics, genome stability, and nerve-dependent blastema formation and outgrowth using the axolotl model.