May 1, 2017– On April 22, thousands of scientists and their supporters gathered in Washington, D.C., and at more than 600 other locations across the world to participate in the March for Science. Pegged to Earth Day, protesters voiced their opposition to proposed federal cuts to funding for scientific research and the planned rollback of environmental rules and public health regulations. They raised alarm over the appointment of political officials dismissive of climate change and of President Donald J. Trump’s false claims about vaccines and global warming.

Previous Democratic administrations have made questionable decisions on science policy, but regardless of where you stand politically, the actions so far of the Trump administration should be deeply disturbing to anyone who cares about the future of the scientific enterprise, much less the planet. Yet it is unlikely that the March for Science will have much of an impact on federal policy over the next few years. Instead, in the long run, the March for Science may have only deepened partisan differences, while jeopardizing trust in the impartiality and credibility of scientists.

“When you become scientifically literate, I claim, you become an environmentalist,” Bill Nye, an honorary cochair of the March for Science told the Washington Post (Gibson 2017). Many signs carried by protesters echoed that assumption, emphasizing themes like “Make America Smart Again,” “Science is the cure for bullshit,” and “Knowing stuff is good.”

Another March for Science sign quoted astrophysicist Neil de Grasse Tyson admirably stating that “I dream of a future where the truth is what shapes people’s politics, rather than politics shaping what people think is true.” Yet as risk communication expert David Ropeik (2017) countered, decades of social science research suggests that human cognition and decisions rarely if ever work in that way. 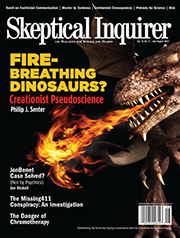 A version of this article appeared in the May/June 2017 issue of Skeptical Inquirer magazine.

Humans are not robots. A deficit in science literacy is not why political leaders and the public disagree over climate change, vaccines, or government funding. By fundamentally misdiagnosing the causes of political conflict today, March for Science advocates may be undermining their own cause. Numerous studies show it is often the best educated and most scientifically literate who are prone to biased reasoning and false beliefs about contentious science issues. The reason for this surprising paradox is that individuals with higher science literacy tend to be more adept at recognizing arguments congenial to their partisan identity, are more attuned to what others like them think, are more likely to react to these cues in ideologically consistent ways, and tend to be more personally skilled at offering arguments to support their preexisting positions (National Academies 2017; Nisbet 2016).

For example, studies find that better educated conservatives who score higher on measures of basic science literacy are more likely to doubt the human causes of climate change. Their beliefs about climate science conform to their sense that actions to address climate change would mean more government regulation, which conservatives tend to oppose (Kahan 2015). Similarly, better educated liberals engage in biased processing of expert advice when forming opinions about the risks of natural gas fracking, genetically modified food, and nuclear energy. In this case, liberal fears are rooted in a generalized suspicion of technologies identified with large corporations (Nisbet et al. 2015).

The same relationship holds in relation to support for government funding of science. Liberals and conservatives who score low on science literacy tend to hold equivalent levels of support for science funding. But analysis shows that as science literacy increases, conservatives grow more opposed to funding while liberals grow more supportive, a shift in line with their differing beliefs about the role of government in society (Gauchat 2015).In sum, our beliefs about contentious science issues reflect who we are socially and politically. The better educated and more literate we are, the more adept we are at recognizing the connection between a political issue and our group identity and interests (Kahan 2015).

Similar factors influence policy decisions. As the late sociologist Dorothy Nelkin (1978) observed nearly forty years ago, political disputes such as those over climate change, vaccination, and scientific funding are fundamentally controversies over political control: Who gets to decide the priority that these issues should take over others, or the actions and costs taken to address problems? Which values, interpretations, groups, and worldviews matter and which should be given greatest weight?

For these reasons, much of the rationale behind the March for Science is not only off target, but the event itself and similar future activities may only intensify political deadlock rather than overcome it.

Although the March for Science was framed as nonpartisan, the messaging leading up to and during the event was anything but helpful. Early on, reflecting contemporary debates on college campuses, organizers were besieged by concerns over issues related to inclusion and identity. Some criticized the organizers for not paying enough attention to these topics, which prompted the posting online of a diversity statement. In response, cognitive psychologist Steven Pinker tweeted: “Scientists’ March on Washington plan compromises its goals with anti-science PC/identity politics/hard-left rhetoric” (Sheridan and Facher 2017).

Twitter remained a source of controversy for organizers. A few days before the event, the official March for Science account declared that the U.S. bombing of an ISIS compound in Afghanistan was an example of how “science is weaponized against marginalized people.” The Tweet was later deleted, earning ridicule from right-wing bloggers (Kelly 2017).

On the day of the march, across cities, some participants donned pink “brain caps,” a reference to the pink “pussy caps” worn at the January 2017 Women’s March. In a similar tribute, T-shirts and signs declared “Keep your tiny hands off my science.” Many signs played on the official Hillary Clinton campaign theme “I’m with her,” with an arrow pointing to planet Earth instead. Some signs mocked Trump by employing allusions to science, referencing him as an “absolute zero” and “black hole.” Other cheeky slogans included “Less invasions, more equations,” and “I’ve seen smarter cabinets at IKEA” (Politi 2017).

In these cases, the March for Science constitutes a potentially hazardous misfire. By choosing public protest as a main strategy, and by voicing messages that have an obvious partisan and ideological slant, the March for Science made it that much easier for Americans to lean on their group identities in forming opinions about contentious issues.

A much discussed recent study published in Environmental Communi­cation, a journal where I serve as editor-in-chief, suggests that scientists may have more discretion to advocate on behalf of policy positions than they assumed, without hurting their credibility (Kotcher et al. 2017). Yet the preliminary study did not test what happens to the perceived credibility of scientists when those policy positions are argued in the context of clear partisan messages communicated by way of protests such as the March for Science.

Since the 1970s, public confidence in almost every major institution has plummeted. Yet confidence in the leadership of the scientific community has remained strong (Funk and Kennedy 2017). As a consequence, scientists in society today enjoy almost unrivaled communication capital. The challenge they face following the March for Science is how to use this capital wisely and effectively.