January 1, 2017 — As millions of Americans visit their health care providers this winter complaining of a cold, surveys suggest that one in four will be expecting their provider to prescribe them an antibiotic, falsely believing that the antibiotic will help them recover more quickly from the virus (Watkins et al. 2015). The demand for antibiotics by patients is not surprising, considering other survey findings. Only about half of Americans know correctly that antibiotics kill bacteria but not viruses, a proportion that has remained relatively stable for more than a decade (Hwang et al. 2015).

In recent decades, similarly false beliefs across countries have contributed to a dangerous rise in antibiotic use. Between 2000 and 2010, worldwide sales of antibiotics by pharmacies and hospitals increased 36 percent. Overall, India, China, and the United States use the most antibiotics, though Americans are by far the highest per capita consumers (Van Boeckel et al. 2014). In fact, the Centers for Disease Control (CDC) (2013) estimates that 50 percent of all antibiotics prescribed in the United States are not warranted. 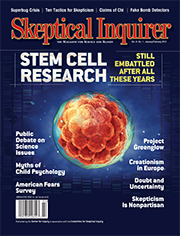 This article appeared in the Jan/Feb 2017 issue of Skeptical Inquirer magazine.

The overuse of antibiotics in the United States and other countries combined with the rapid growth in the use of antibiotics to grow livestock has led to the evolution of lethal “superbugs,” bacteria that are resistant to most antibiotics. When people overuse antibiotics, they are more likely to kill off “good” bacteria in their bodies that protect them from infection. Drug-resistant bacteria are then more likely to take over, festering in places such as the gut. These superbugs can spread to other people at home and at work or in a hospital.

The rise of superbugs and the loss of antibiotic effectiveness not only makes it more difficult to combat common threats, such as urinary tract infections or pneumonia, but those patients undergoing joint replacements, dental surgery, cancer therapy, and other procedures—who often depend on antibiotics to recover—are also put at high risk.

Each year at least 2 million Americans battle serious bacterial infections that are resistant to one or more antibiotics, and at least 23,000 die annually as a direct result of those infections (Centers for Disease Control 2013). In a recent report, the World Bank (2016) warned that by 2050 the growth in drug-resistant infections, if not contained, would cause a level of global economic damage equivalent to, if not worse than, the 2008 financial crisis.

Responding to the threat, in 2015 the Obama administration set a goal of by 2020 cutting inappropriate use of antibiotics in hospitals by 20 percent and in other health care settings by 50 percent. Recognizing that antibiotic resistance is an international problem that cannot be solved by the actions of a single country, a United Kingdom report last year called for a “massive global public awareness campaign” so that patients no longer demand—and health care providers do not prescribe—unnecessary anti­biotics (Review on Antimicrobial Resistance 2016).

Communicating in the Dark

To be sure, more than just public education is needed. The widespread and unnecessary use of antibiotics in agriculture must be ended; sanitation and clean water systems must be built in poorer countries; drug companies must step up to develop new antibiotics; and health agencies need funding for the early detection of emerging superbugs, concludes the recent U.K. report.

But changing the beliefs of the public is also essential. Health care providers are under immense pressure from patients to provide antibiotics for treatment of colds and other viral illnesses. A 2012 survey found that half of U.S. health care providers say that their patients expect an antibiotic when visiting for a viral infection. Research shows that a health care provider’s perceptions of patient expectations are important, since they tend to be a reliable predictor of over-prescribing. Patients also report other means by which they obtain antibiotics, using prescriptions left over from past visits or using those obtained by a family member or friend (Watkins et al. 2015).

The problem in mounting a public education campaign is that only a handful of quality studies and surveys exist that evaluate public attitudes and beliefs, providing little basis by which to design and target messages or to plan other persuasion strategies. Those few studies available reveal a variety of substantial communication challenges and barriers.

In the United States and Europe, members of the public still do not see antibiotic resistance as a personally relevant problem that poses risks to their health or that is a function of their own choices as a health consumer. Instead, they tend to blame doctors, hospitals, and the government. They also believe that science is likely to find a solution in the form of new antibiotics and, as of yet, do not see the need for major changes in individual behavior, health care practice, or policy (McCullough et al. 2016; Wiklund et al. 2015).

The 2016 U.K. report estimates the budget for a global public education campaign at $100 million, an absurdly low figure. The research costs of adequately mapping and evaluating the views of different segments of the public across countries, identifying the types of messages that are likely to be persuasive, the sources that they trust for information, and the local channels by which to reach people would alone easily exceed that figure. The budget for the actual advertising and campaign efforts would be much greater.

In September 2016, all 193 member countries of the United Nations signed a declaration committing to a process that sets goals and timelines for reducing the use of antibiotics in medicine and agriculture. The model for the process reflects past UN efforts on climate change.

However, for decades on the topic of climate change, world governments and scientific bodies were slow to recognize the need to invest in social science-based research to inform public communication efforts, and they continue to underfund initiatives aimed at engaging the public on actions to reduce greenhouse gas emissions. Hopefully we have learned a lesson. In combating the superbug threat, we cannot afford to delay investing in the communication research and activities needed to decrease the overuse of antibiotics.