October 15, 2014 —Earth is “fucked” and our insatiable growth economy is to blame. So argues Naomi Klein in her intentionally provocative best-seller This Changes Everything: Capitalism vs. the Climate.

Klein is the latest among an influential network of like-minded authors who have declared that modern society is at war with nature in a battle that threatens the survivial of the human species. Examples include US writer/activist Bill McKibben, Canadian broadcaster David Suzuki, and Australian philosopher Clive Hamilton.

Deeply skeptical of technological and market-based approaches to climate change, they urge the need for a new consciousness spread through grassroots organizing and protest. “Only mass movements can save us now,” Klein writes. She argues that “profound and radical economic transformation” is needed to avoid certain catastrophe.

The more than 300,000 people who turned out for last month’s People’s Climate March in New York are just the start.

For Klein, human survival demands that we engage in a furious battle against the status quo, one equal in intensity to the efforts that ended slavery and European colonialism. “Both these transformative movements forced ruling elites to relinquish practices that were still extraordinarily profitable, much as fossil fuel extraction is today,” she writes.

Ultimately, for Klein, climate change is our best chance to right the “festering wrongs” of colonialism and slavery, “the unfinished business of liberation.”

As a public intellectual and aspiring movement leader, Klein sees her mission as winning a “battle of cultural worldviews,” opening up the space for a “full throated debate about values,” telling new stories to “replace the ones that have failed us.”

In these new stories, Klein and her intellectual confederates value solutions that they see as coming from the natural world. They eschew technologies such as nuclear power or genetic engineering, arguing on behalf of a transition to smaller scale, locally controlled solar, wind, and geothermal energy technologies and organic farming.

In this egalitarian future where people grow their own food, produce their own energy, share jobs working 3-4 days/week, and deliberate in small groups, traditional definitions of economic growth would cease, with progress defined instead in terms of health, happiness, and community.

Ultimately, the hoped-for grand bargain on climate change will be that as rich nations “de-grow” their economies, they will share their surplus wealth and renewable technologies with China, India and other developing countries. In return these countries will choose a different, less consumer-driven path.

In a paper just published at Wiley Interdisciplinary Reviews Climate Change, I analyze how public intellectuals such as Klein and McKibben shape debate over climate change. I compare their arguments to other prominent public intellectuals such as UK economist Nicholas Stern, former US Vice President Al Gore, The New York Times’ writer Andrew Revkin, and Oxford University anthropologist Steve Rayner.

Gore and Stern differ from Klein in arguing that climate change can be tackled primarily through market-based policies like carbon pricing, rejecting the idea that we must choose between growing the economy and fighting climate change.

In contrast, Rayner was among the first public intellectuals to argue that climate change is more accurately framed as an energy innovation and societal resilience problem. He has also strongly questioned the pursuit of a binding international agreement to limit emissions.

Similarly, as Revkin recently noted, contrary to the arguments of Klein, renewable energy sources alone are not likely to meet the “intertwined challenges of expanding energy access [among the world’s poor] while limiting global warming.” Like Rayner, he argues that we need to rethink our assumptions, and broaden the menu of policy options and technologies considered.

On the need to diversify approaches, Stern along with Columbia University economist Jeffrey Sachs have offered similar arguments, but place much stronger faith than either Rayner or Revkin in the ability of a global international agreement to decarbonize the world economy, guided by timetables, temperature targets, carbon budgets, research and development investments and carbon pricing signals.

In defining what climate change means, these public intellectuals and others help create a common outlook, informally guiding the work of like-minded advocates, funders, journalists, and governmental officials.

Given the complexity of climate change as a social problem it is possible for competing narratives and explanations about its social implications and solutions to exist.

So it is not surprising that among public intellectuals there is disagreement over what the issue means for society, leading to intense clashes among those who look to one discourse over another to guide their work (see table below). 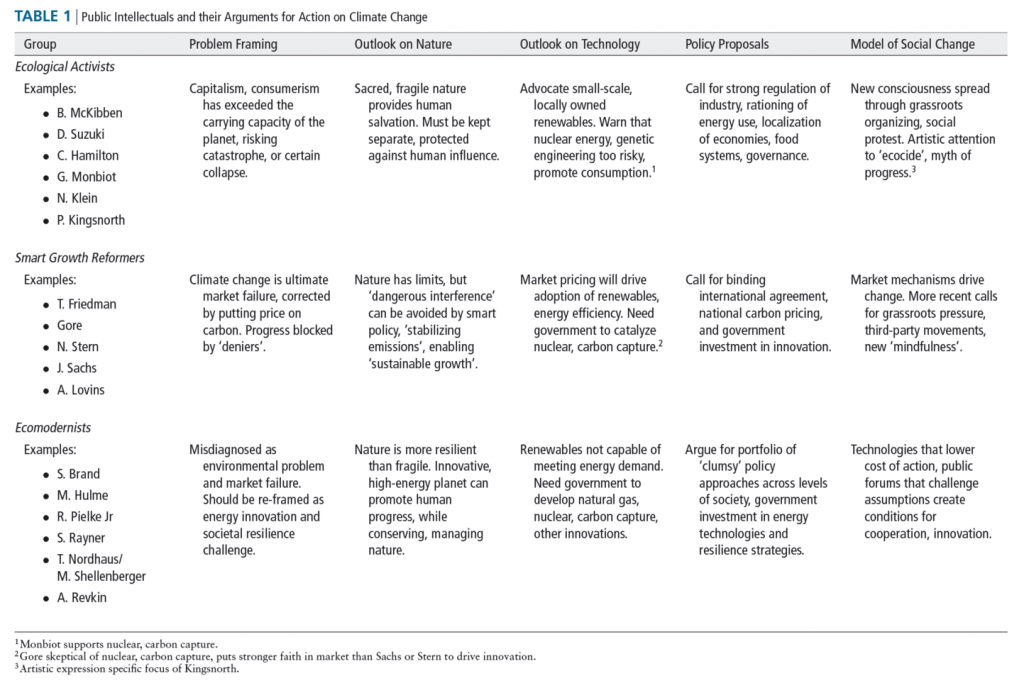 Revkin, for example, has criticized the grassroots campaign against the Keystone XL oil pipeline as distracting from the “core issues involving our energy future and is largely insignificant if your concern is averting a buildup of carbon dioxide in the atmosphere.”

He has also argued the need to chart a path to a “Good Anthropocene”. In this new “Age of Us”, humans have generated considerable ecological and social risks, but at the same time, in the face of this uncertainty, possess the ability to create a better future through technological innovation and resilience strategies.

For his part, Clive Hamilton argues that Revkin and other public intellectuals promoting the possibility of the “good Anthropocene” are “unscientific and live in a fantasy world of their own construction.”

These disagreements over the social implications of climate change reflect differing values, intellectual traditions, and visions of the “good society.” They are embedded in contrasting beliefs about nature, risk, progress, authority, and technology.

In this battle among competing ideas, climate change becomes “a synecdoche – a figurative turn of phrase in which something stands in for something else — for something much more important than simply the way humans are changing the weather,” notes Kings College London’s Mike Hulme (a public intellectual himself).

Reading Klein, it is clear that she is not confident that the mass movement she calls for and the deep structural reforms that “change everything” are achievable. Instead, like radical intellectuals of movements past, her utopian vision serves an important political function, creating space for more pragmatic, less revolutionary social innovations.

Many who are inspired by Klein’s arguments will take to the streets, to social media, and to campuses to wage battle for their worldviews. For the rest of us, we should carefully engage with Klein’s ideas, seeking out with equal enthusiasm and critical reflection the arguments of other public intellectuals in the climate debate.

The goal is not to choose among competing perspectives, but to grapple with their tensions and uncertainties. Through this process, as we call on our political leaders to act and work with others on solutions, we can hold our own convictions and opinions more lightly; identifying what is of value among the ideas offered by those on the left, right, and in the center.

–This article originally appeared at The Conversation UK.