A four year old child, Peter, has pious parents who live a life of theistic conduct. The child soon picks up all the rituals from his parents. However, growing up in a spiritually-nourishing atmosphere, he soon develops a spirit of inquiry. One day, he approaches his father with an innocent question: “What do you do when you go to the kingdom of God?”

The father rendered speechless by the child’s innocent inquiry dismisses the question as mere childish. The child becomes dissatisfied by his father’s response. Being unable to find answers to his questions, he grows up to become an avowed atheist. He becomes absorbed in a materialistic way of life and puts all his energy into amassing wealth. However, Peter soon discovers that no matter how much he is trying to find happiness within his materialistic pursuits, he becomes increasingly dissatisfied. He realizes there is something seriously wrong. 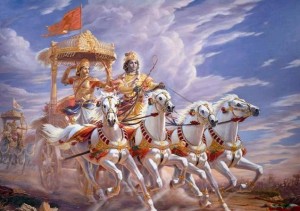 One day, he accidentally contacts a copy of Bhagavad Gita in a public library. The cover picture of the book compels him to open the book and flip through some of its chapters. Intrigued by the details of knowledge on the science of God and His divine energies, he is not able to leave the book aside. He becomes convinced that he is going to find answers to all the unanswered questions which prompted him to become an atheist.

Peter becomes completely satisfied with his findings in relation to his childhood question and develops the following non-sectarian conception of God and His creation:

God is one without a second. All the religious texts refer to the same God who has many names which highlight His particular divine qualities. He resides in His spiritual planet surrounded by His part-and-parcel loving servants, and each of the servants has an inviolable relationship of love with Him. God is eternal, His parts and parcels are eternal and His abode is eternal.

All the living entities within creation are parts and parcels of the same God. They have a unique relationship of service with the Lord. Therefore, devotional service to God is the natural and eternal activity of every soul. Having forgotten this eternal loving relationship with God, we are suffering within this temporary material world, fundamentally because of misidentifying ourselves with the covering of our material body and trying to provide enjoyment to the body while forgetting the natural engagement for the soul. 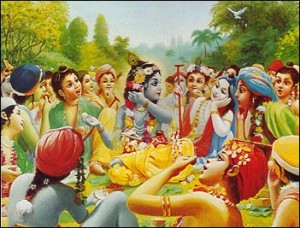 We all belong to the kingdom of God and we have a specific role to play in our spiritual identity. No sooner do we awaken to this spiritual reality and act on that platform than we can experience a complete spiritual satisfaction – satisfaction on the level of the soul.