How do residents and visitors of Boston’s Columbia Road experience their street and how could these everyday experiences be enriched? This became the starting point for an inquiry and design work students developed as part of the Experience Design Studio 1 in Fall 2018, led by professor Kristian Kloeckl and organized in partnership with LivableStreets Alliance.

The studio course focused on the urban street as a context for investigation and the development of design interventions. Street experiences are ubiquitous, often overlooked, and complex. We all experience the manifold interactions in a street at multiple levels as soon as we leave home or work, walk along a sidewalk, stop in front of a storefront, take a rest on a bench, wait for the bus or stop to chat with a friend we met unexpectedly. A street is public land. People can freely assemble, interact, and move about in it. It is a public easement and one of the few contexts that is shared among all people and that is open for a wide range of planned and unplanned activities. Streets connect and mediate personal daily routines, social interactions and urban fabrics and activities at large. Streets have diverse sets of characteristics and perceived qualities. And they manage more or less successfully to attract locals and visitors to spend time for a variety of activities related to work, play, learning, socializing, leisure, etc. Above all, streets continuously evolve in reflection and anticipation of changes underway at all levels in their urban context.

In a series of initial sessions we examined our own personal experience of streets. We focused on experiences related to what we see, hear, touch, smell, and taste. We explored what determines the quality of our street experiences and how we remember them, why we seek specific places along a street to spend time. These sessions were accompanied by a series of inspiring guest lectures by Jonathan Hardy (Philips Lighting), Erica Walker (Noise and the City), Nick Jackson (Toole Design), Kate McLean (Sensorymaps.com), and Tony Lechuga (LivableStreets Alliance).

In collaboration with LivableStreets Alliance, we then focused on one street in particular for our research and design work: Columbia Road in Boston. The 2.3 mile long street connects Franklin Park and Joe Moakley Park as well as the Waterfront in South Boston. It represents the missing link of the Emerald Necklace between these two parks as originally envisioned by Frederick Law Olmsted. Columbia Road is today an integral part of a series of diverse neighborhoods and communities. It fulfills essential urban connections but points in many ways also to a lack in the network of urban spaces, representing opportunities for change. The street is considered a priority project for the City of Boston and part of the early action group in Boston’s 2030 plan.

Through site visits and conversations with members of local communities the studio investigated people’s experience along Columbia Road, identified existing values and attractors and investigated potentials for enriching the experience of the diverse resident and visiting communities. Insights gained became the basis for the formulation of design interventions that aim at contributing positively to experiences for both residents and visitors in ways that respect existing social fabrics and interactions. Interventions are articulated at different physical scales, at times focused on one specific site along Columbia Road or tackling multiple related sites. They are material or immaterial, involving objects, services, information systems, ambient installations, events, etc. or at times a combination of these. We began to look at Columbia Road as a place of possibilities, participation and co-creation; places of destination, transit, and of retreat; places for encounter; places of connection, proximity and of distance; places for dynamic appropriation where meaning is constantly negotiated.

The below projects are some of a total of 12 proposals developed within the design studio.

Throughout their fieldwork along Columbia Road Lun Zhou and Houjiang Liu remained struck by the disconnect between Columbia Road and its western-most neighbor, Franklin Park Zoo, one of Boston’s and Massachusetts key attractions that welcomes several hundred thousand visitors each year. Through their observational studies they attributed part of this disconnect to the physical barrier of the intersection of Columbia Road with Blue Hill Avenue with a seemingly unsurmountable pedestrian crossing. 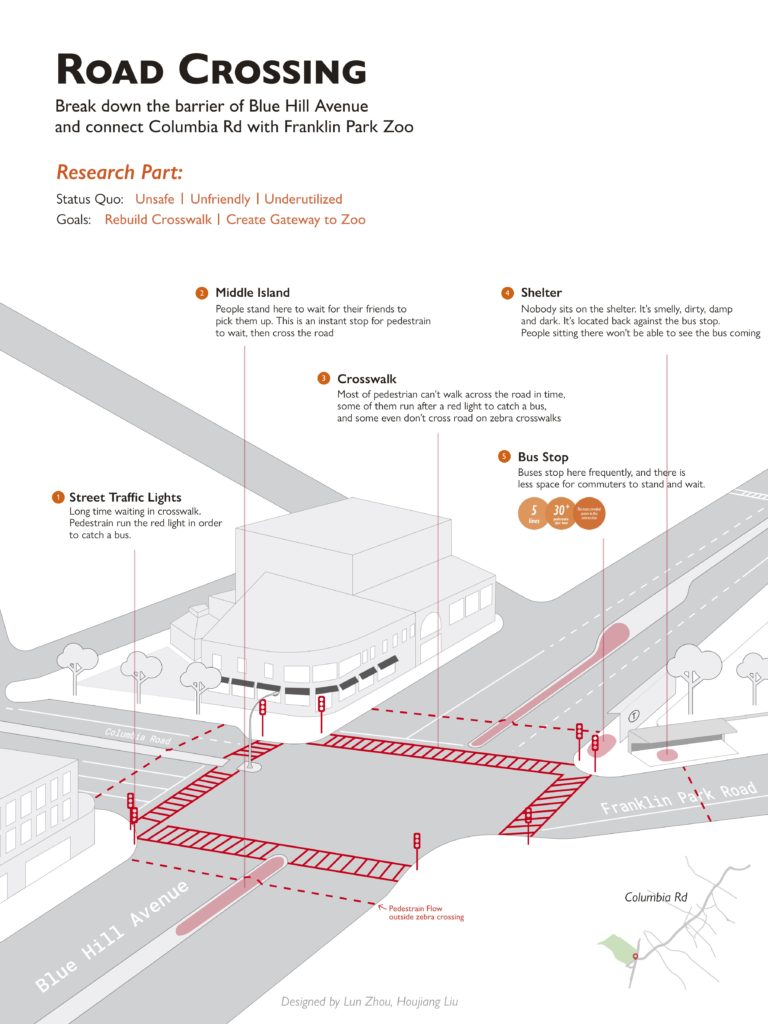 Their proposal involves an extensive graphic treatment of the street asphalt in the entire crossing area to provide a more inviting ground for crossings. Beyond this, Lun and Houjiang developed a system of intervention that include parklets for existing eateries, environmental graphics to pull the area visually together and the transformation of a small bus shelter into an open-air pavilion as a grand welcome gesture to Franklin Park Zoo on Blue Hill Avenue and facing Columbia Road. 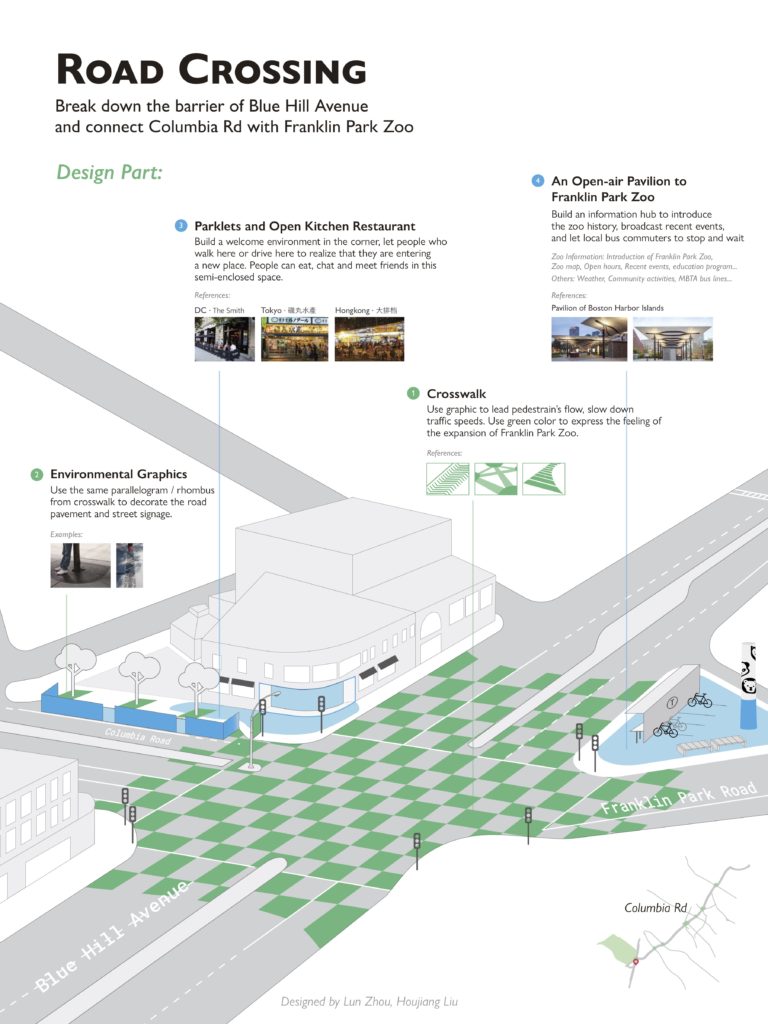 In their work, Lauren McMullen and Erin Brennan engaged with a large number of community members and realized that the neighborhood along Columbia Road and in particular around Lilla G. Frederick Middle School already had lots to offer in terms of the manifold activities and initiatives by members of the community. They realized that they did not need to add anything physical. Rather, their intervention became performative in its essence. 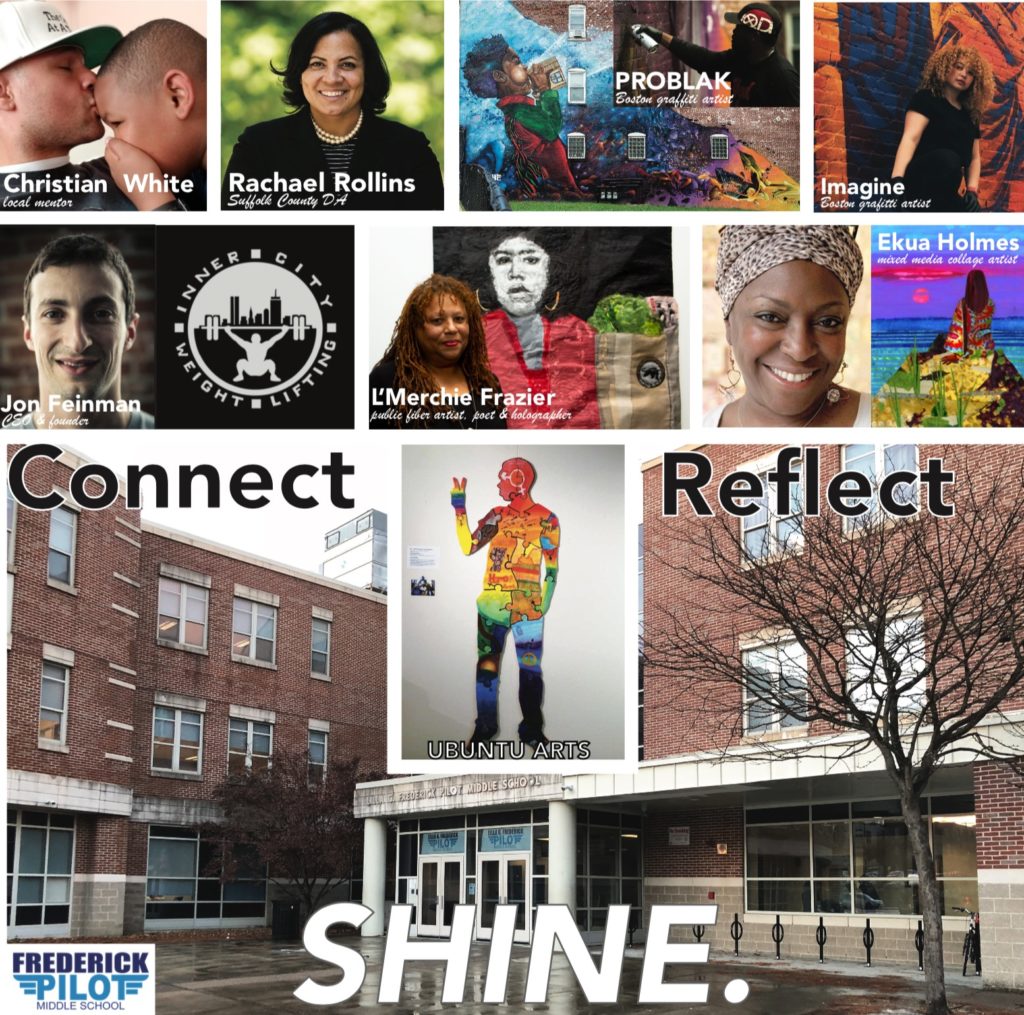 They worked with teachers to leverage the available room facilities of the school for a speaker series that brought the students in touch with some of the most passionate and energetic community members and engage with them through conversation and creative practice. Based on their work, Lauren and Erin are now working on the first speaker series that is planned to launch in in the first half of 2019.

In their research along Columbia Road the group composed of Jeremy Brodeur, Estefania Ciliotta, and Sylvia Zepeda understood that Columbia Road, more than a connector is, in fact, in many ways a barrier. Physically, Columbia Road is wide and difficult to cross, with poorly timed pedestrian crossing signals and aggressive vehicular traffic that regularly exceeds posted speed limits. Crossroads that could otherwise link Roxbury and Dorchester are instead blocked by the infrastructure supporting the elevated commuter rail tracks.

Communities appear also to be divided by Columbia Road rather than connected, with neighborhood associations in Dorchester using Columbia Road as their western barrier, and those in Roxbury claim it as their eastern limit.

Gang activities pose a further challenge, often claiming small areas as their turn, sometimes just a few blocks or even a single street. These elements converge near Ceylon Park, where the Fairmount Line crosses Columbia Road. 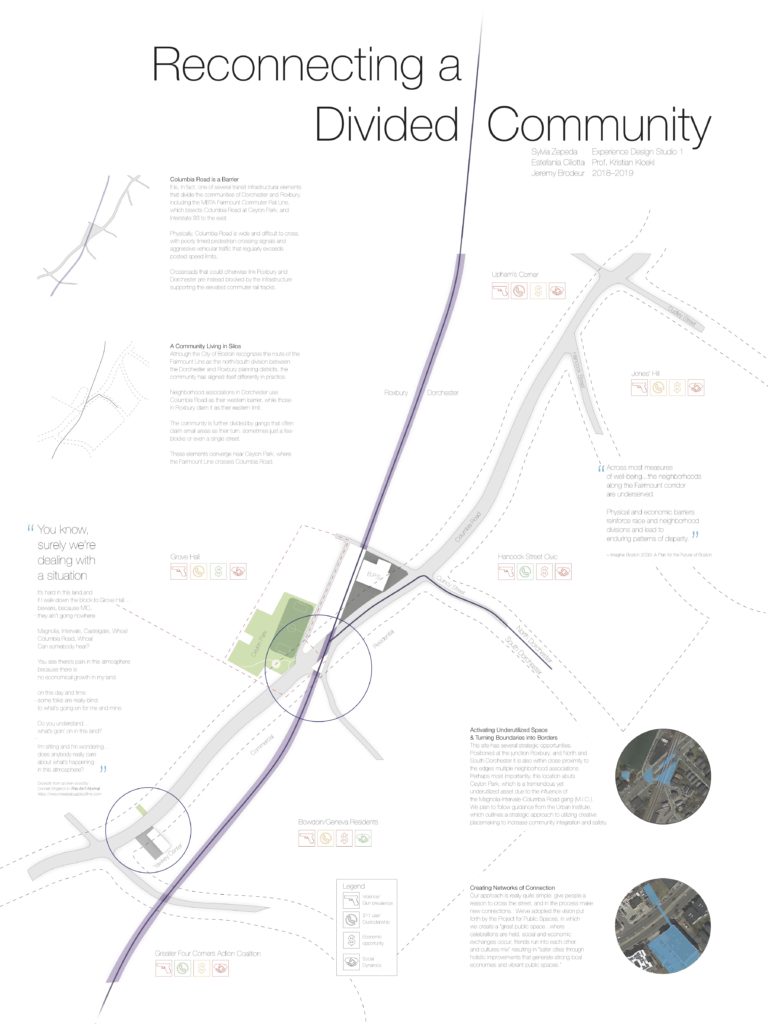 The group’s proposed intervention focuses thus on creating networks of connections that bridge the communities and localities on either side of Columbia Road. One of the sites they focus on for such a physical/social connection is the underutilized triangle along Columbia Road right under the Fairmount Line at the height of Ceylon Park – the Pillars Park Triangle as the group named the site. 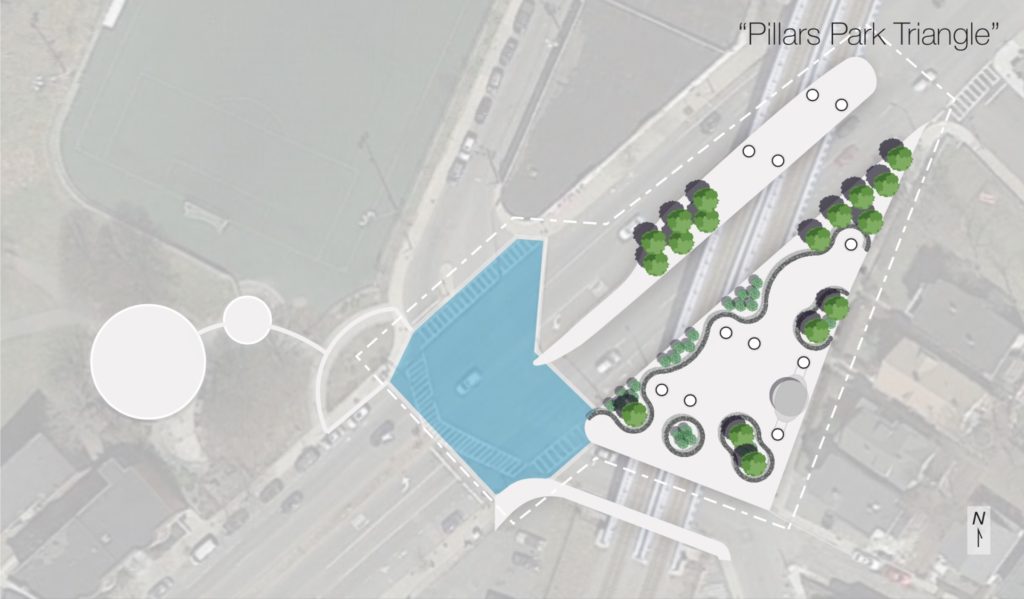 The proposed intervention contemplates both physical as well as social, organizational, and event-based elements. A place-based artist in residence program in collaboration with local organizations such as nearby DS4SI or other community artists, designers and organizers, to facilitate our program implementation. The Pillars Project leverages a unique feature of the site: the set of eight, massive concrete pillars supporting the Fairmount Line train bridge. Currently, the pillars are regular victims of tagging – gang marking that claims the space as territory. The proposal, instead, envisions the pillars as canvasses for the community, primarily through the resident artist, although calls for street artists are also envisioned.

The significance of this strategy is twofold: first, by using the pillars as canvasses, the community reclaims the space as its turf. Secondly, the work is impermanent by design, with each pillar repainted on a rotating schedule. This flexibility allows for growth by experimentation, fosters resilience through adaptability, and creates interest through ongoing creative events.

Further initiatives include Pop Up Programming and  A sense of Play to claim the proposed Pillars Park Triangle as a space for the community. 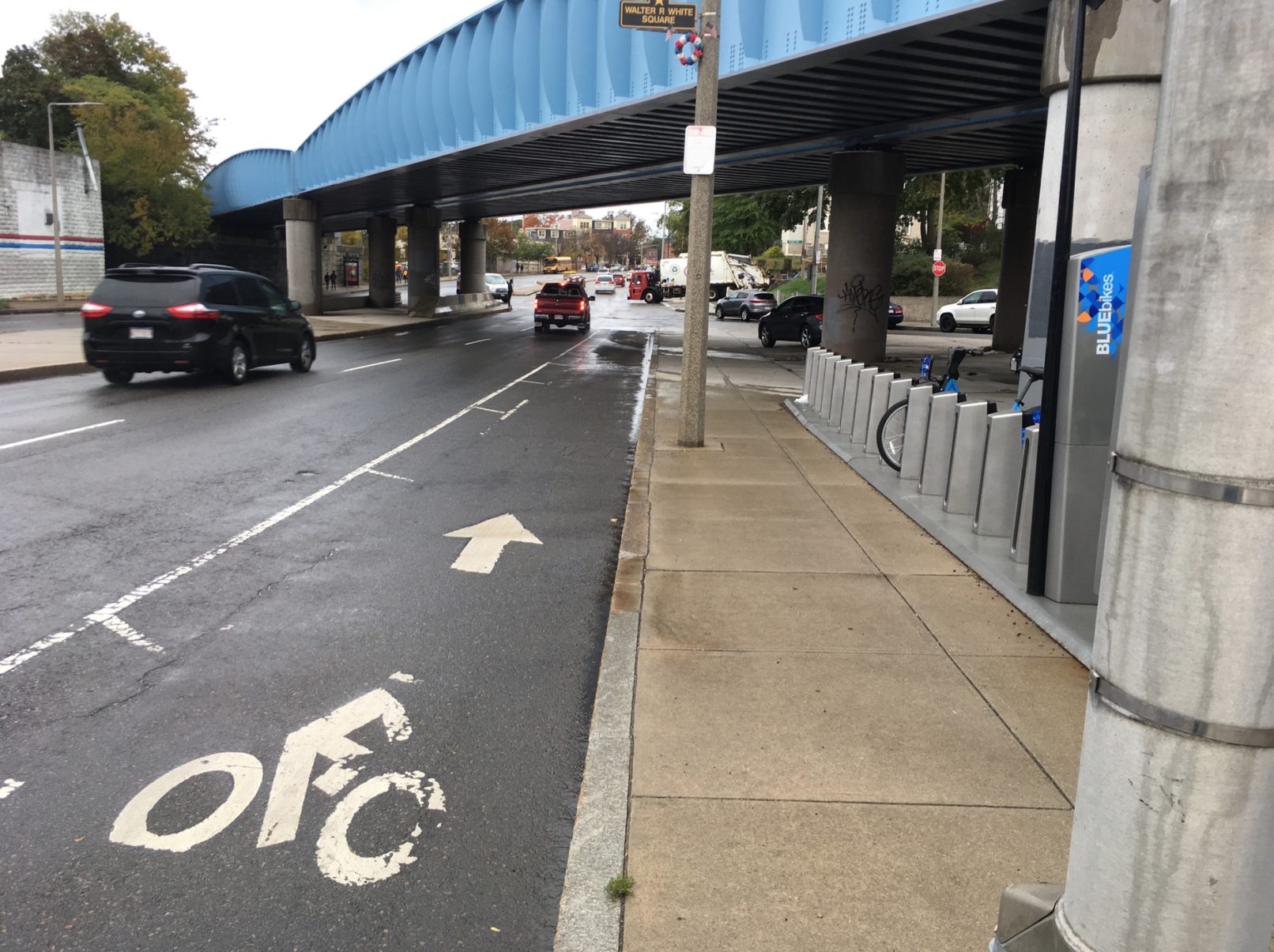 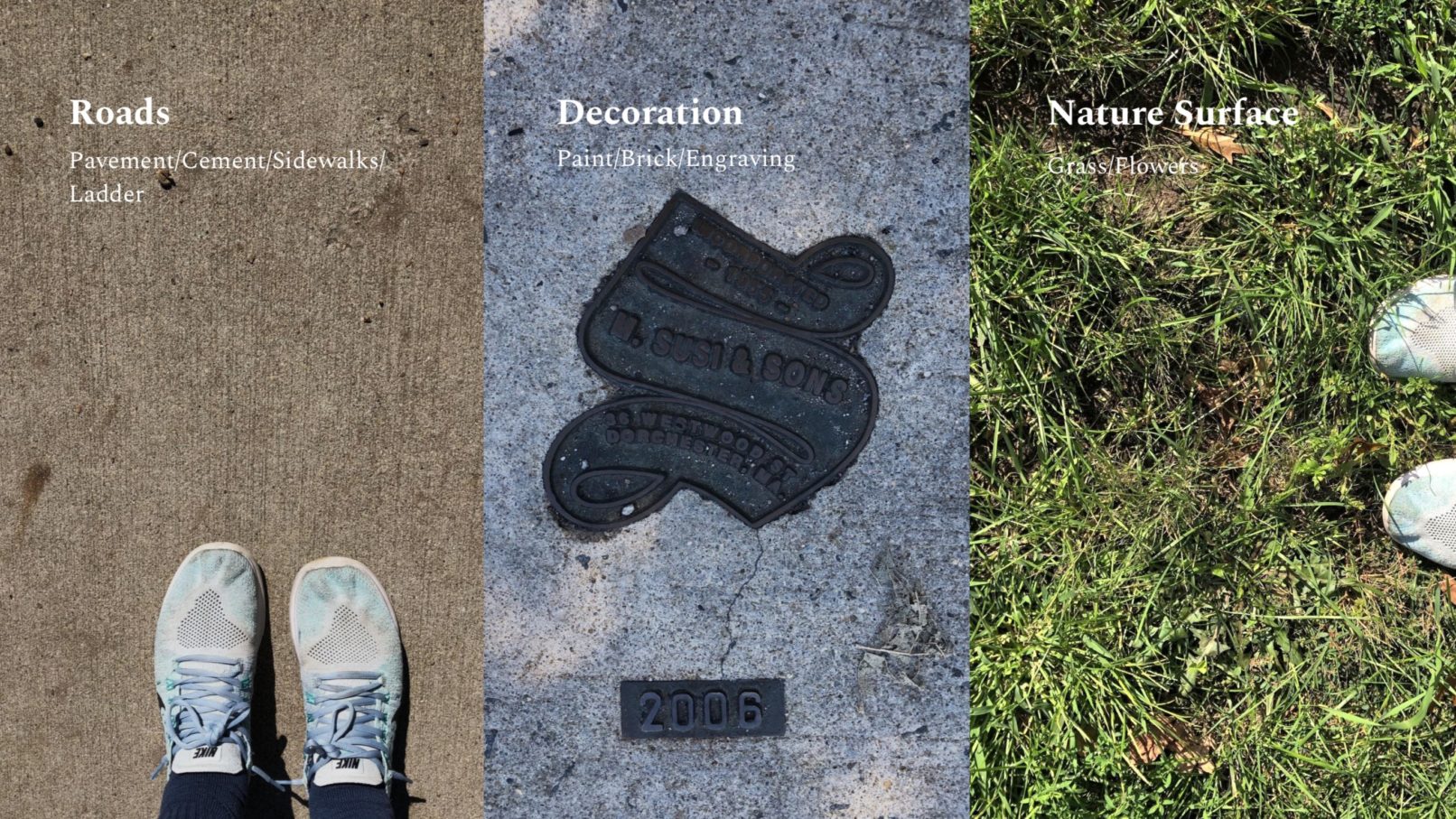 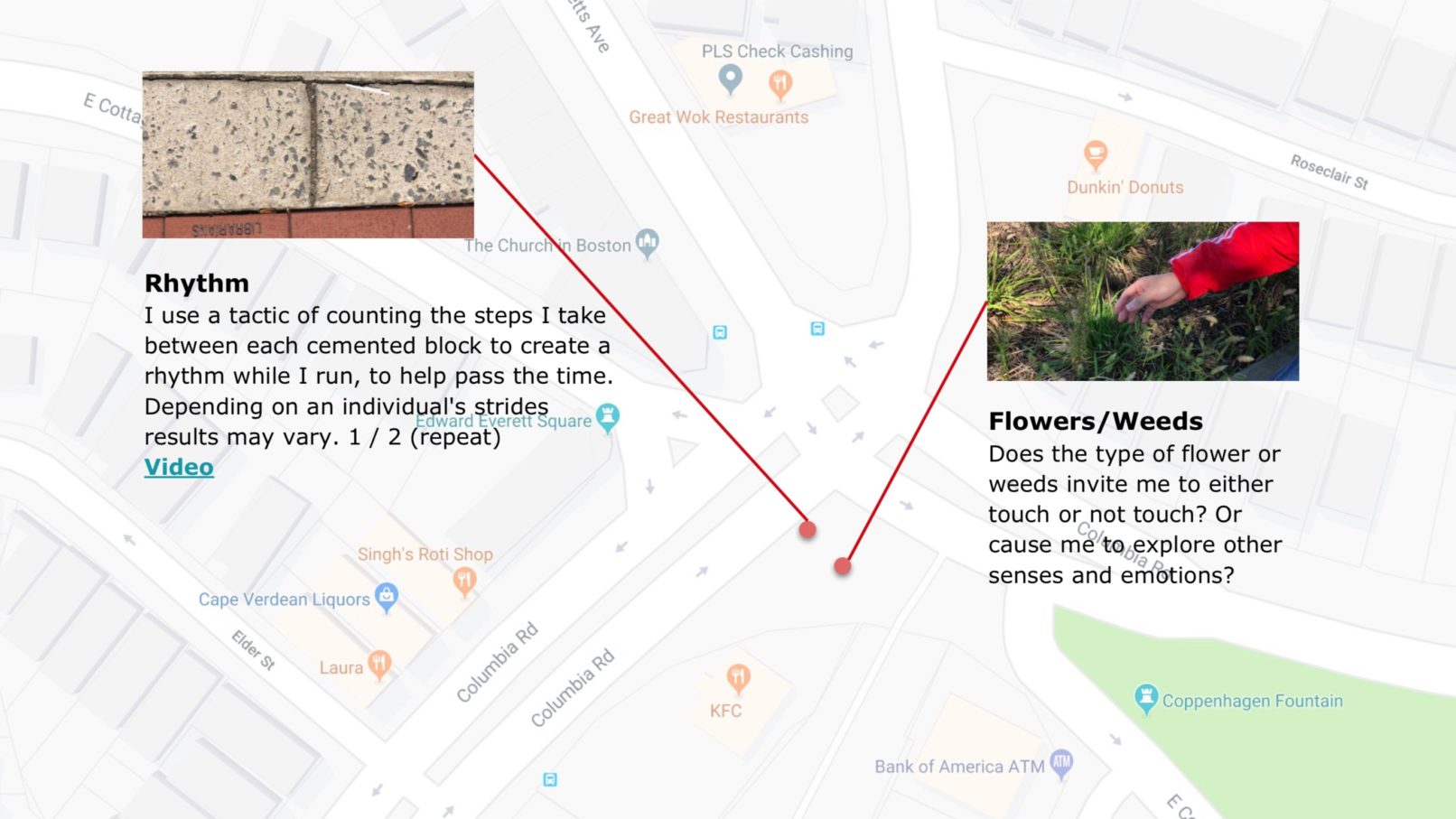 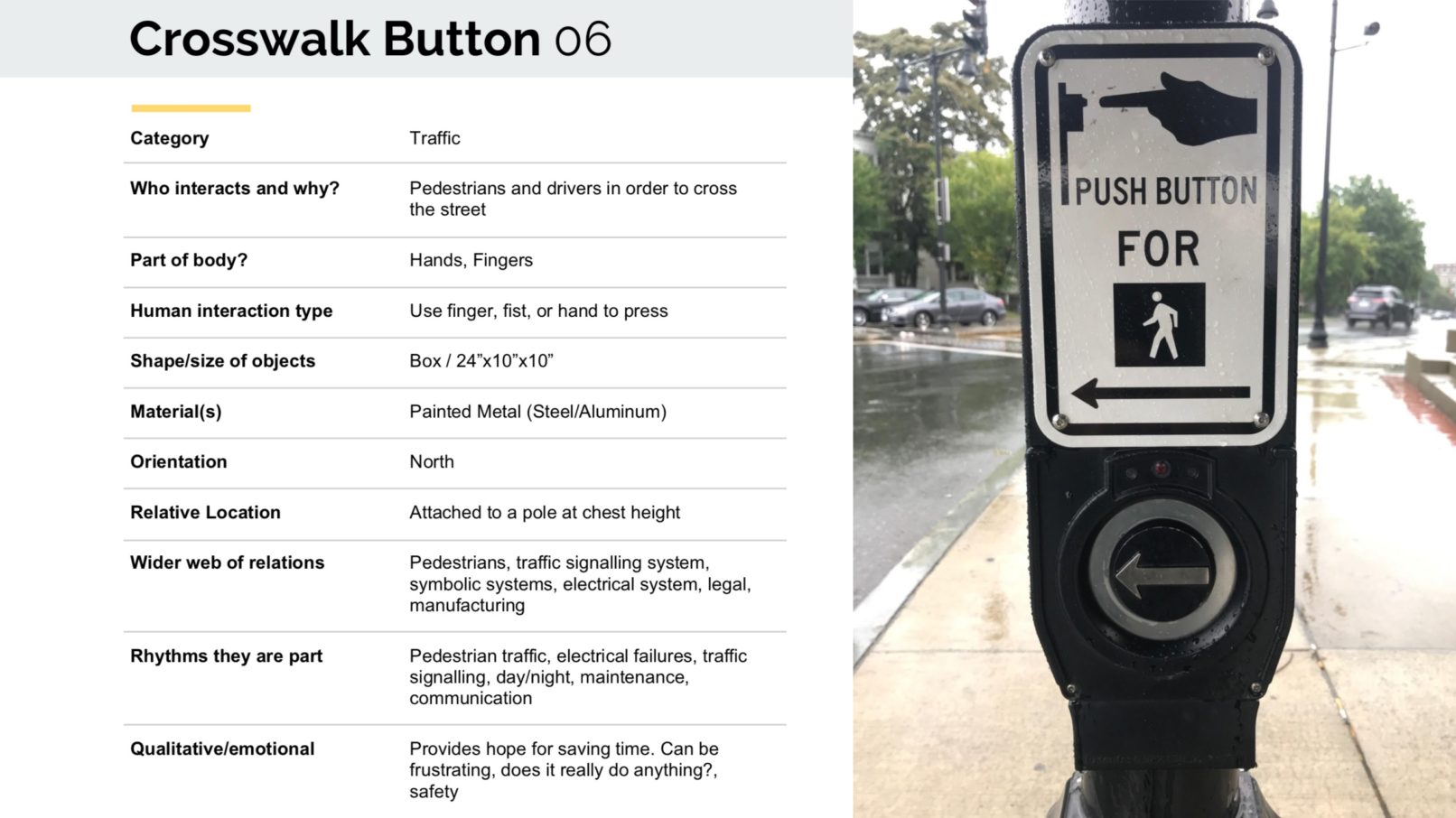 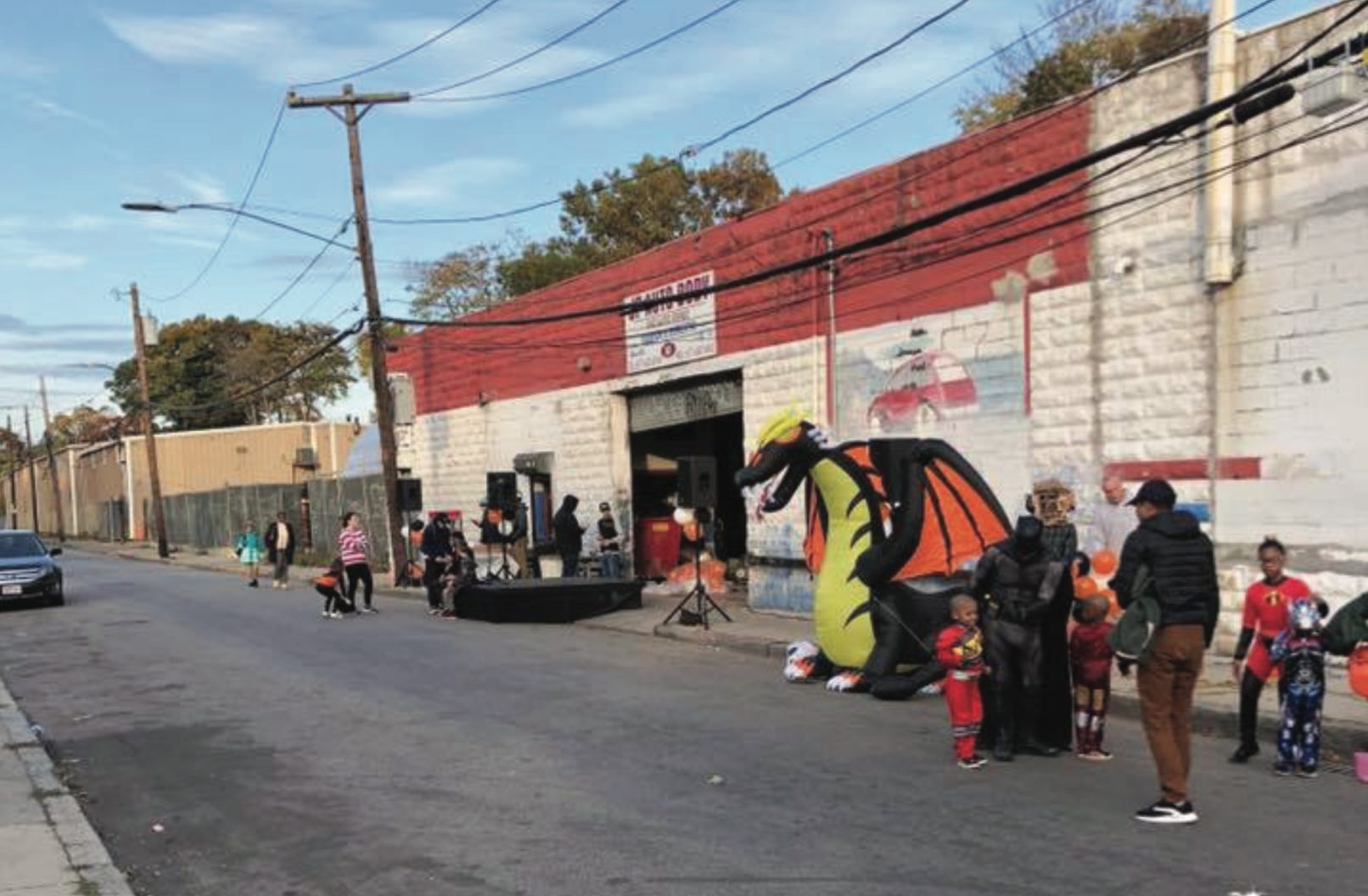 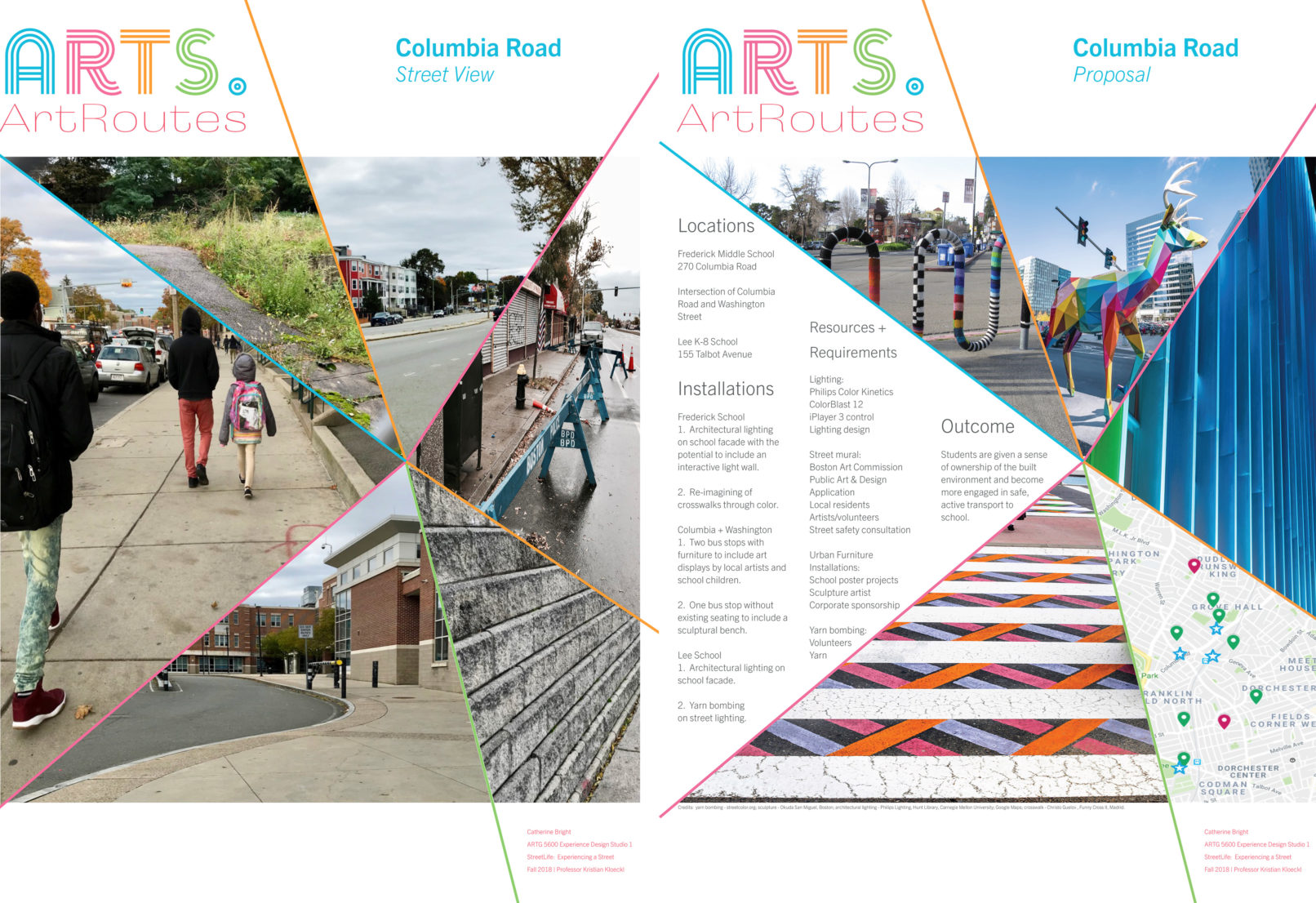 ArtRoutes project combining the "Safe Routes to School" initiative with a program of public art installations along children's paths to school. Cathrine Bright

Converting an unused space under a railway bridge into a pocket park with a virtual link to the nearby sports field. Daniel Farrow 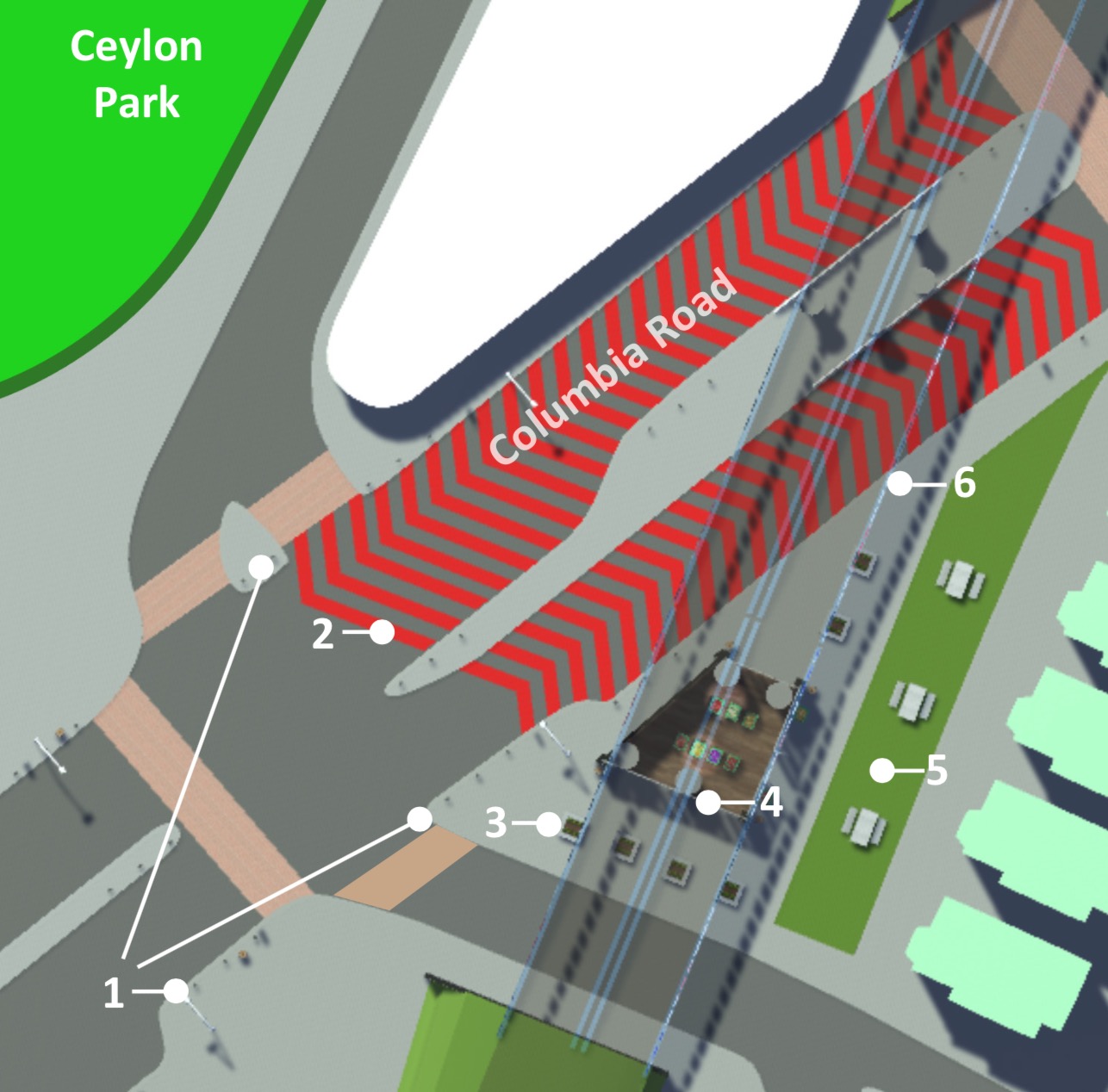 Converting an unused space under a railway bridge into a pocket park with a virtual link to the nearby sports field. Daniel Farrow