The commuting population is vital for business and the economy of Boston and Massachusetts. People who live in the surrounding areas but work in the city struggle daily with long commuting times — more than ninety minutes one way. The cumulative effects of this extreme commuting is detrimental to peoples’ health over time and has potential knock-on effects on the local economy. The project Smooth Commuting develops a plan to redesign the Boston commuter rail system in order to mitigate some of these negative effects. The solutions offered seek not only to impact commuters’ health in positive ways, but to envision a pleasurable commuting experience.

Stef, Houjiang and I were looking forward to the summer but also wondering how we could practice the skills and apply the knowledge we had been learning all semester. A call from Mad*Pow — a design agency that strives to help people improve their lives and connect — asking designers to consider how we might build health into our everyday environments, piqued our interest.

We named our team and began to gather ideas. As a group, our interests varied and we cast a wide net. We explored everything from sofacize – and yes, that’s a thing — to the future of mobility, food equity, health care, environmentally-friendly living, toxins in our furniture, and new opportunities for mobile rooms (autonomous vehicles) to bring services around cities.

After a couple of weeks gathering, sharing, and discussing our ideas, we reflected again on the requirements of the design brief and agreed to focus on the plight of the extreme commuter. This fitted well as a topic that could both be addressed in the short term, and as something with big potential in the future.

As an extreme commuter — someone with a ninety or more minute commute each way — I am rather opinionated and passionate about the experience. In spite of this, I learned a lot doing this challenge. For example, how detrimental the cumulative effects of extreme commuting can be on peoples’ health, or that Boston’s population swells daily from roughly 700,000 to 1.2 million during working hours. Boston’s economy relies on commuters, but commuting has been getting increasingly more congested and difficult. Stef and Houjiang have their fair share of commuter horror stories to draw from too. 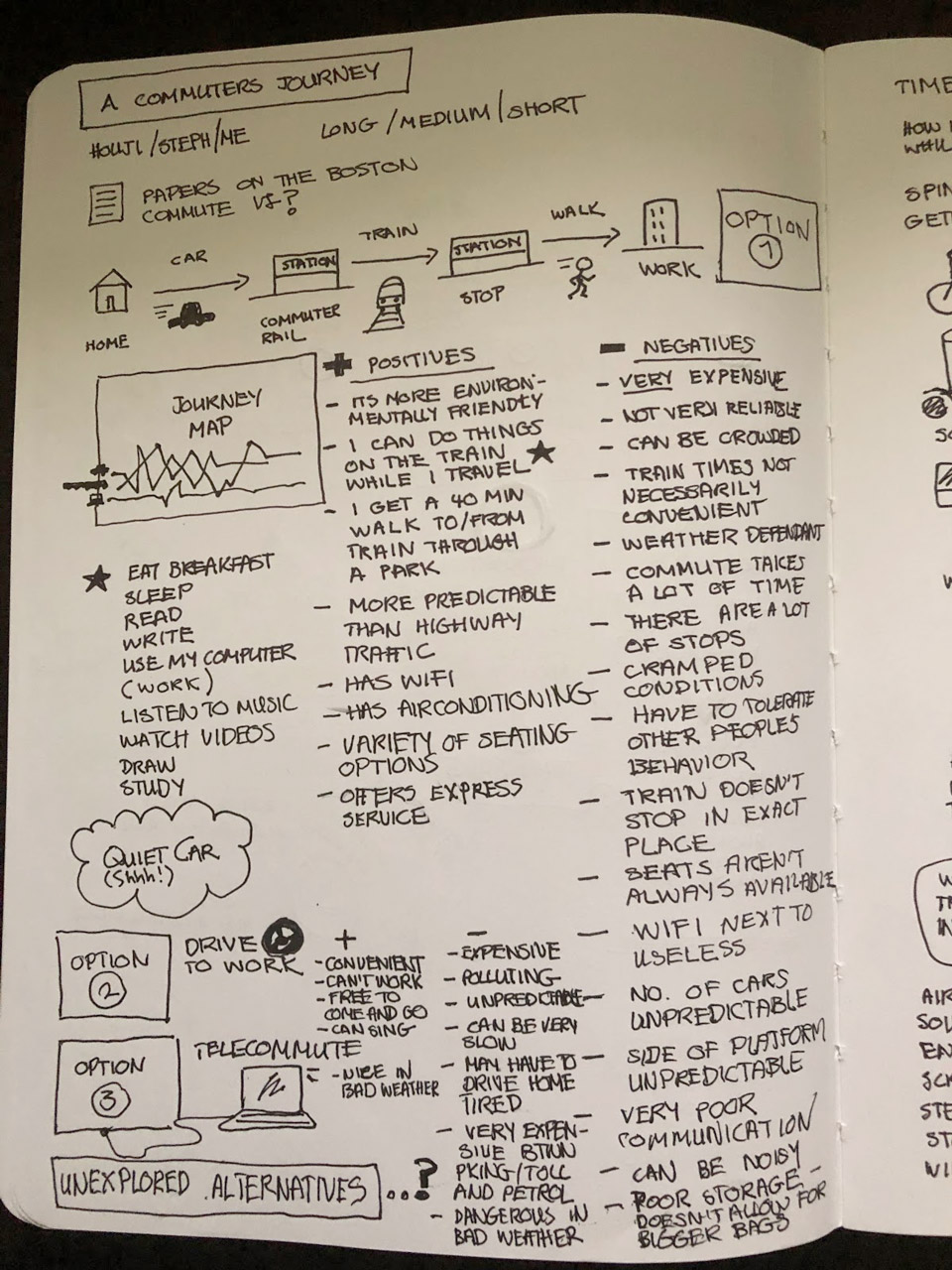 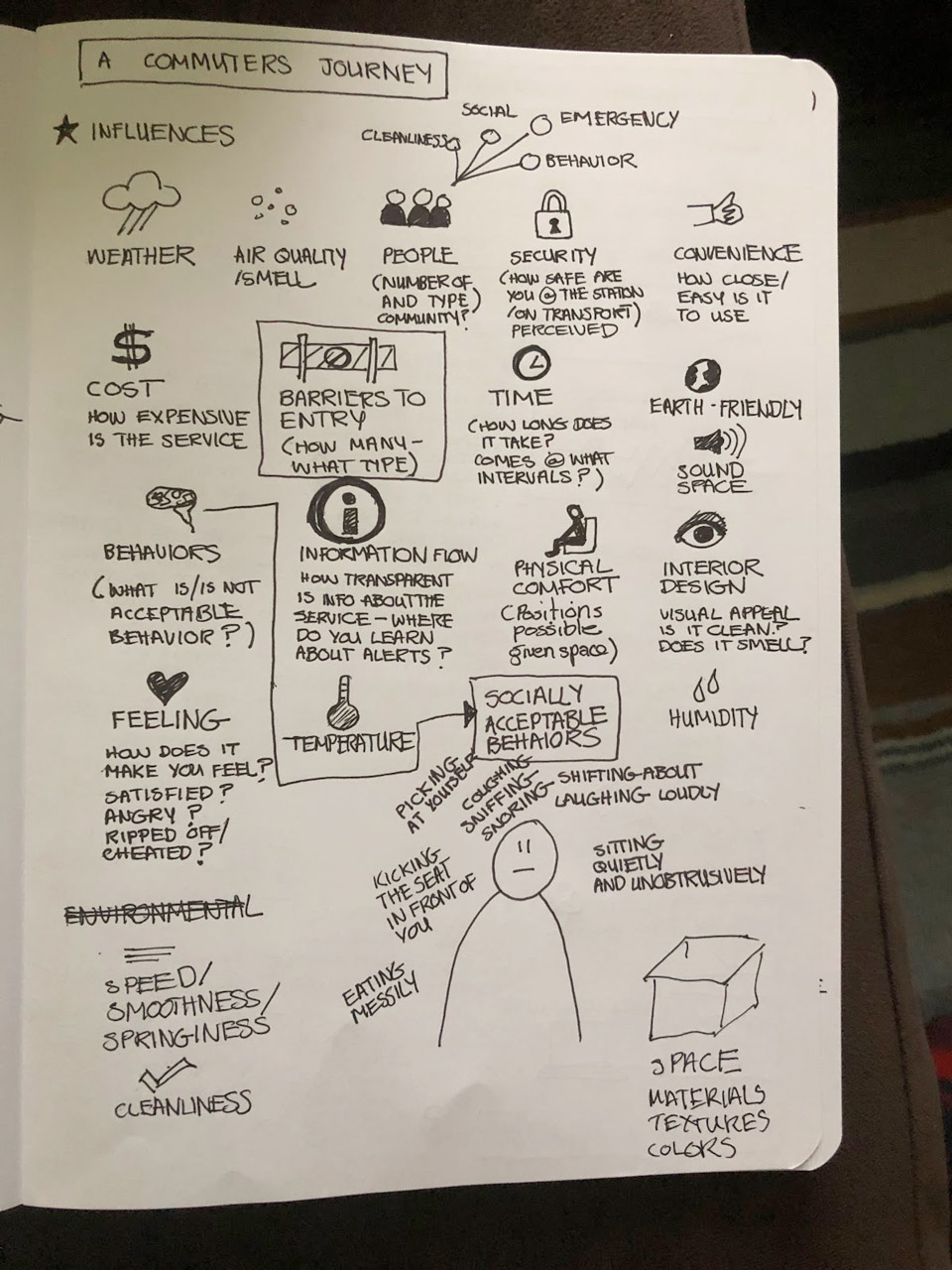 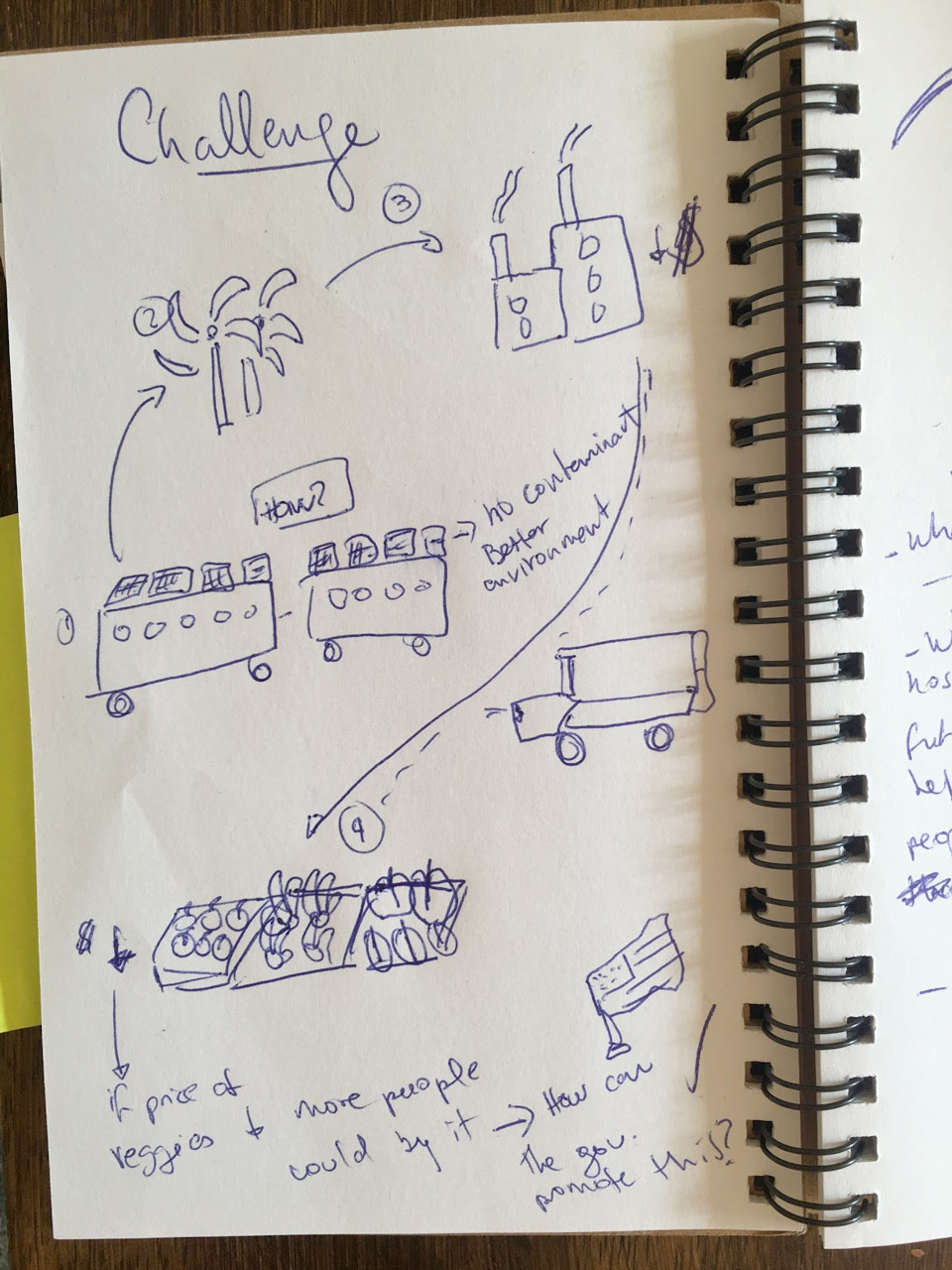 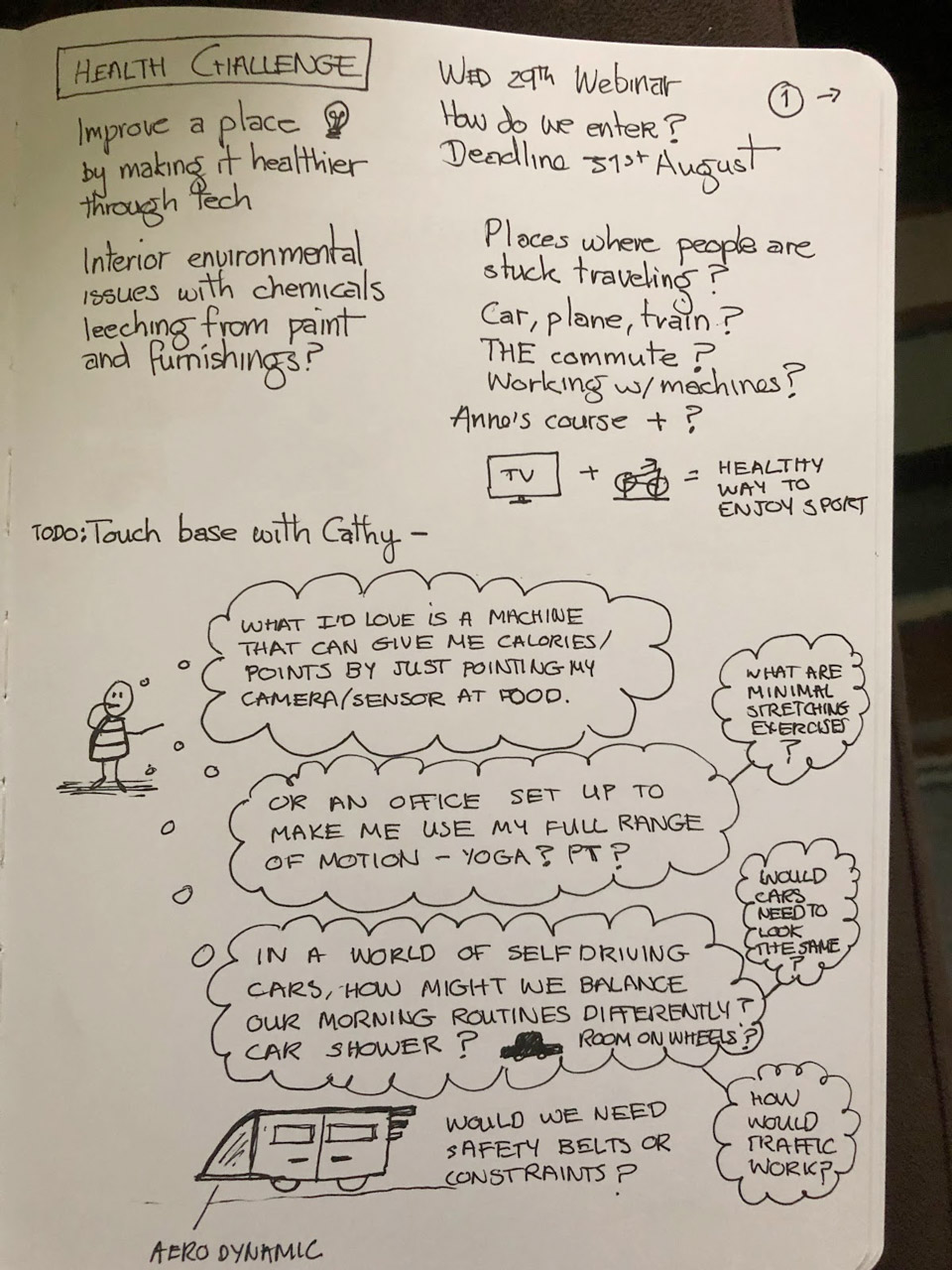 As I commute all the time, I had taken lots of photos and notes about my impressions of the experience. Some days the commute is fine and some days it is like death by a thousand paper cuts. However, I only take one of the twelve commuter rail lines.
To begin we did literary review research on commuting in general, and Boston specifically. We found some great white papers on the future of Boston’s commuter rail and the commuter crisis Boston is currently experiencing. Whether by road or by rail, everything is currently maxed out and Boston officially has the worst commuting times in the United States. 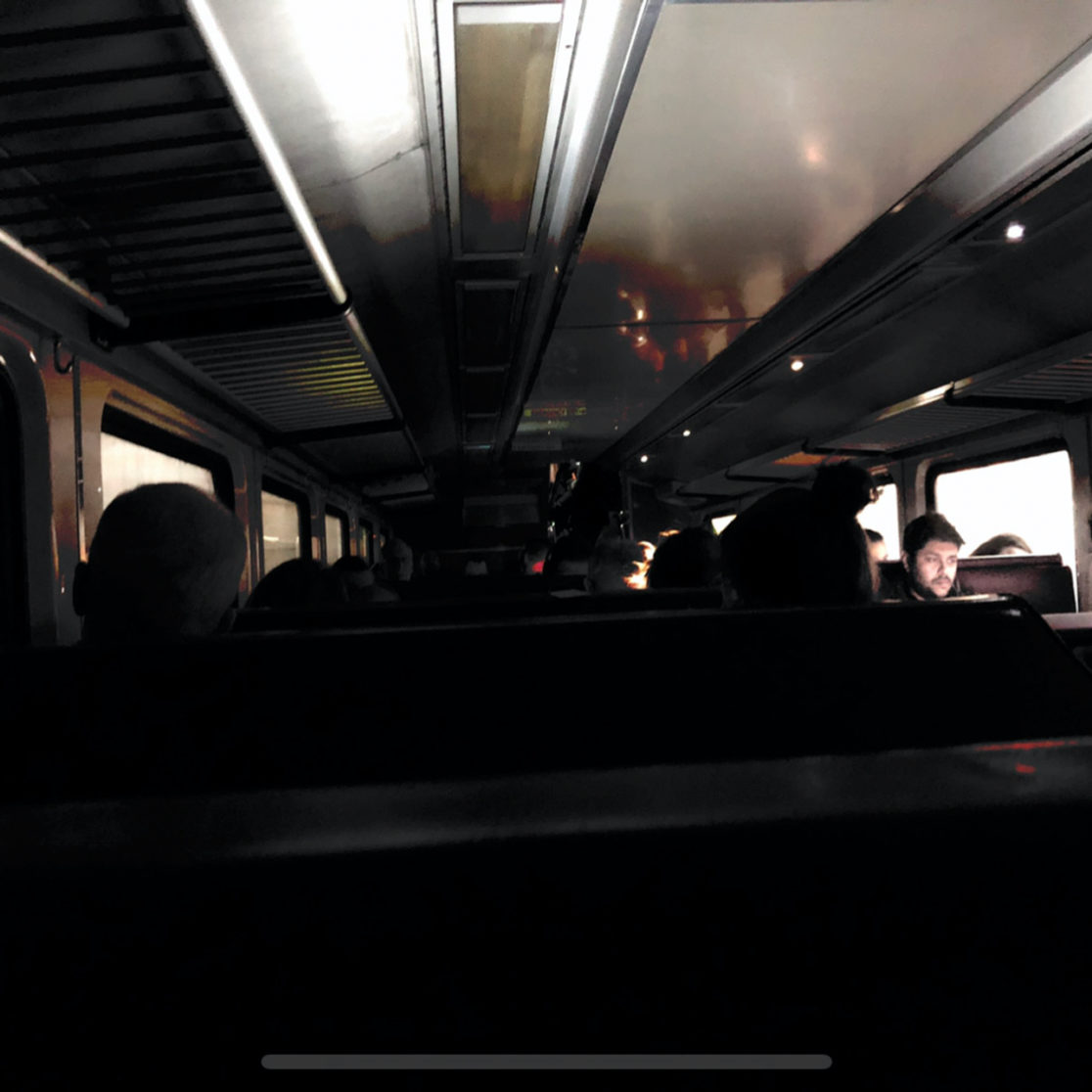 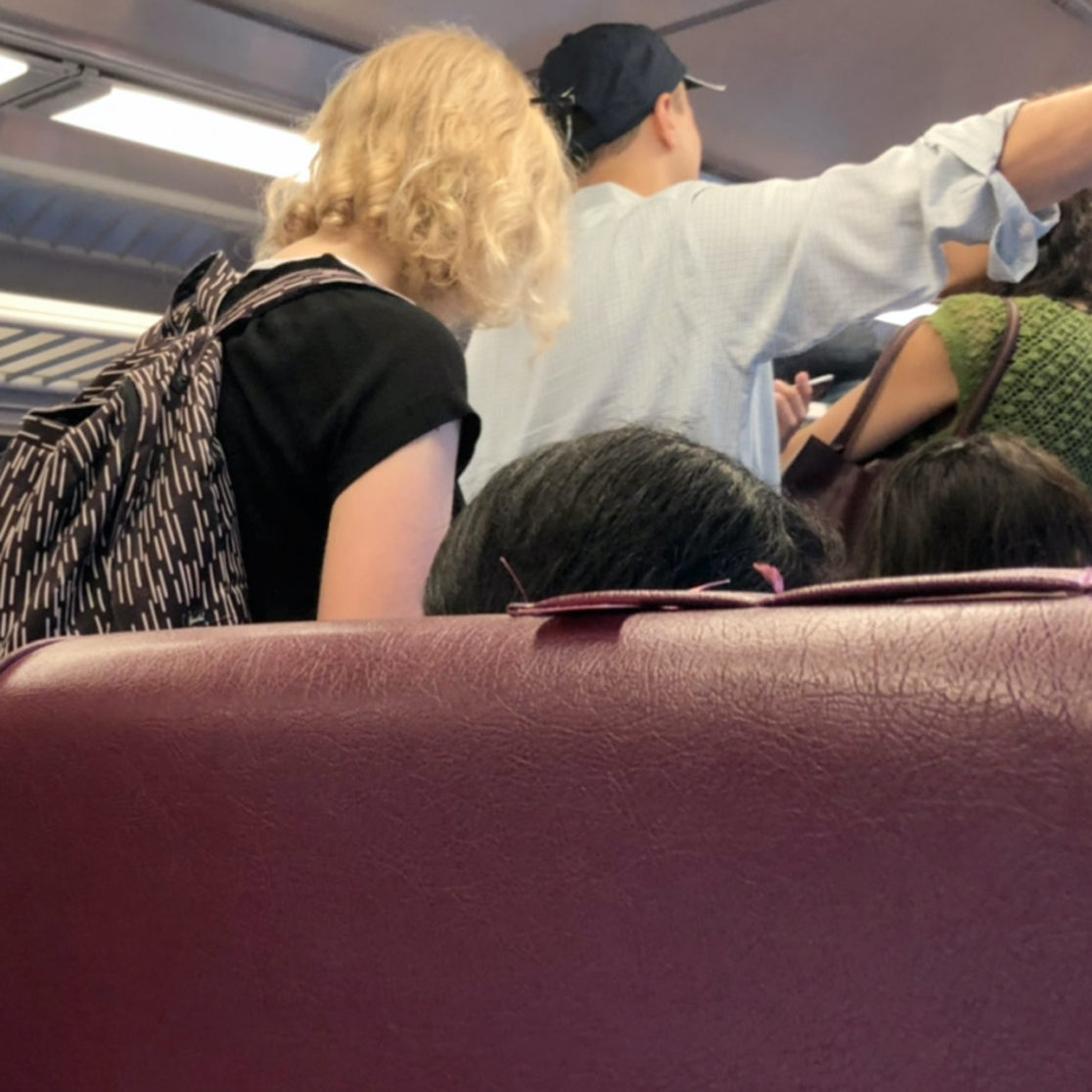 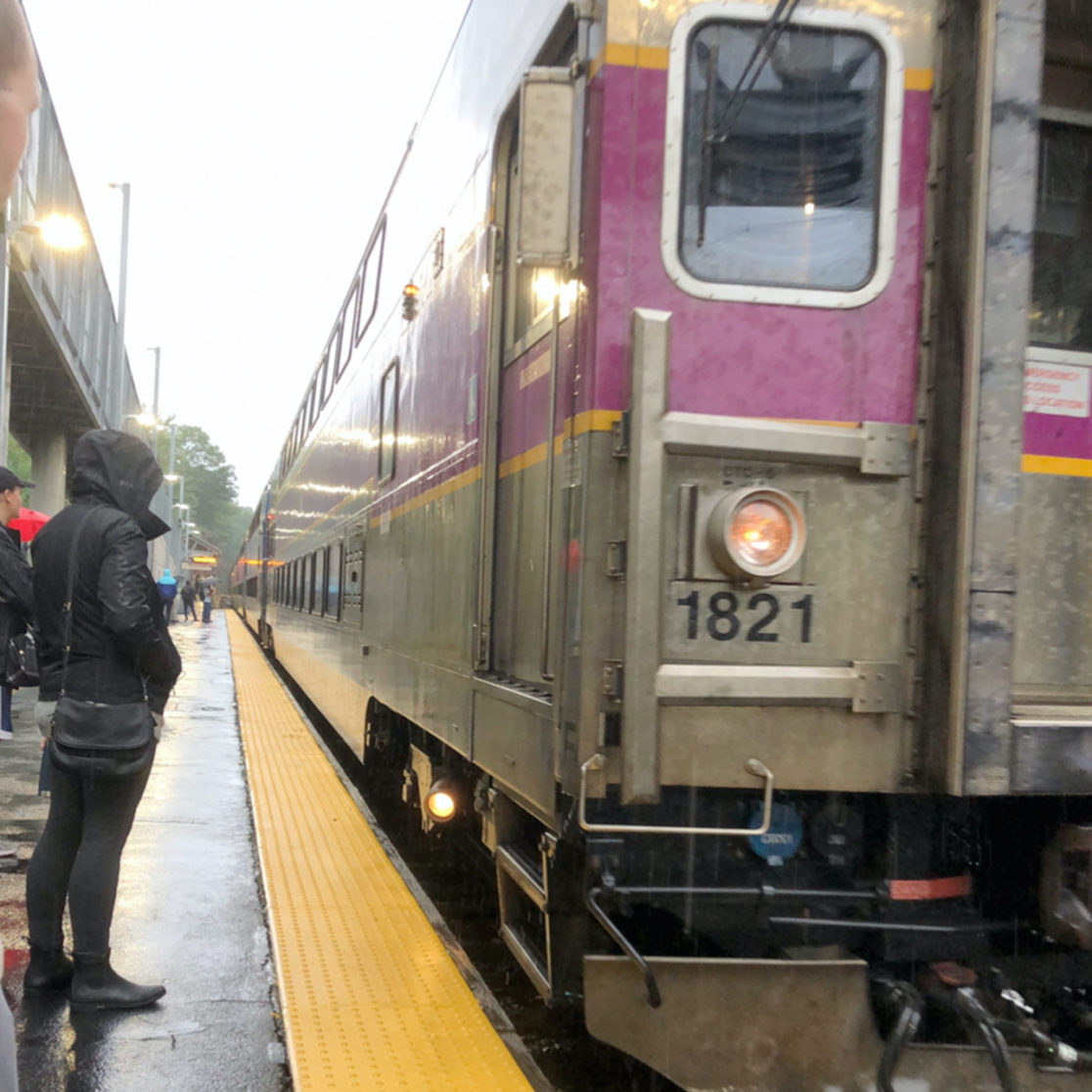 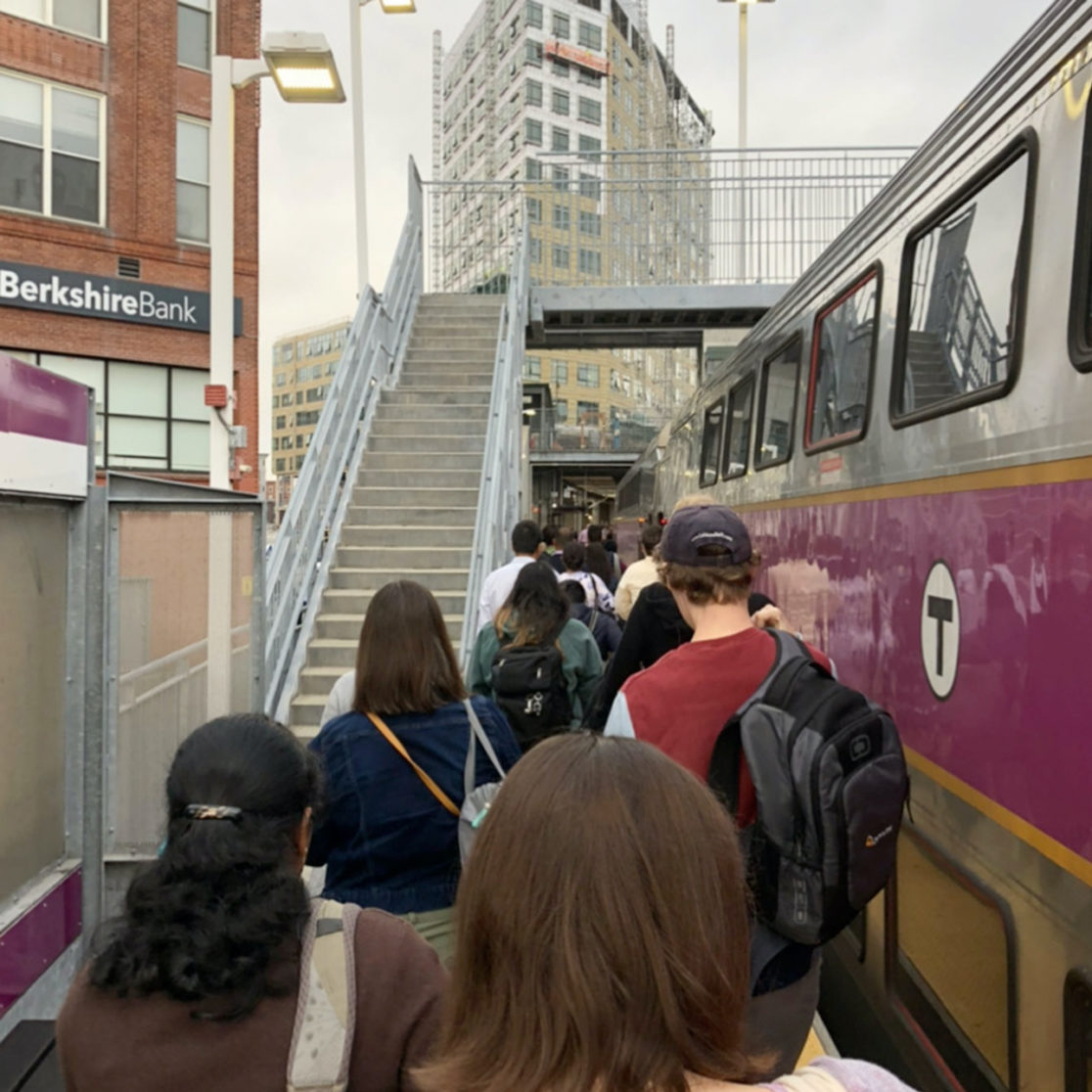 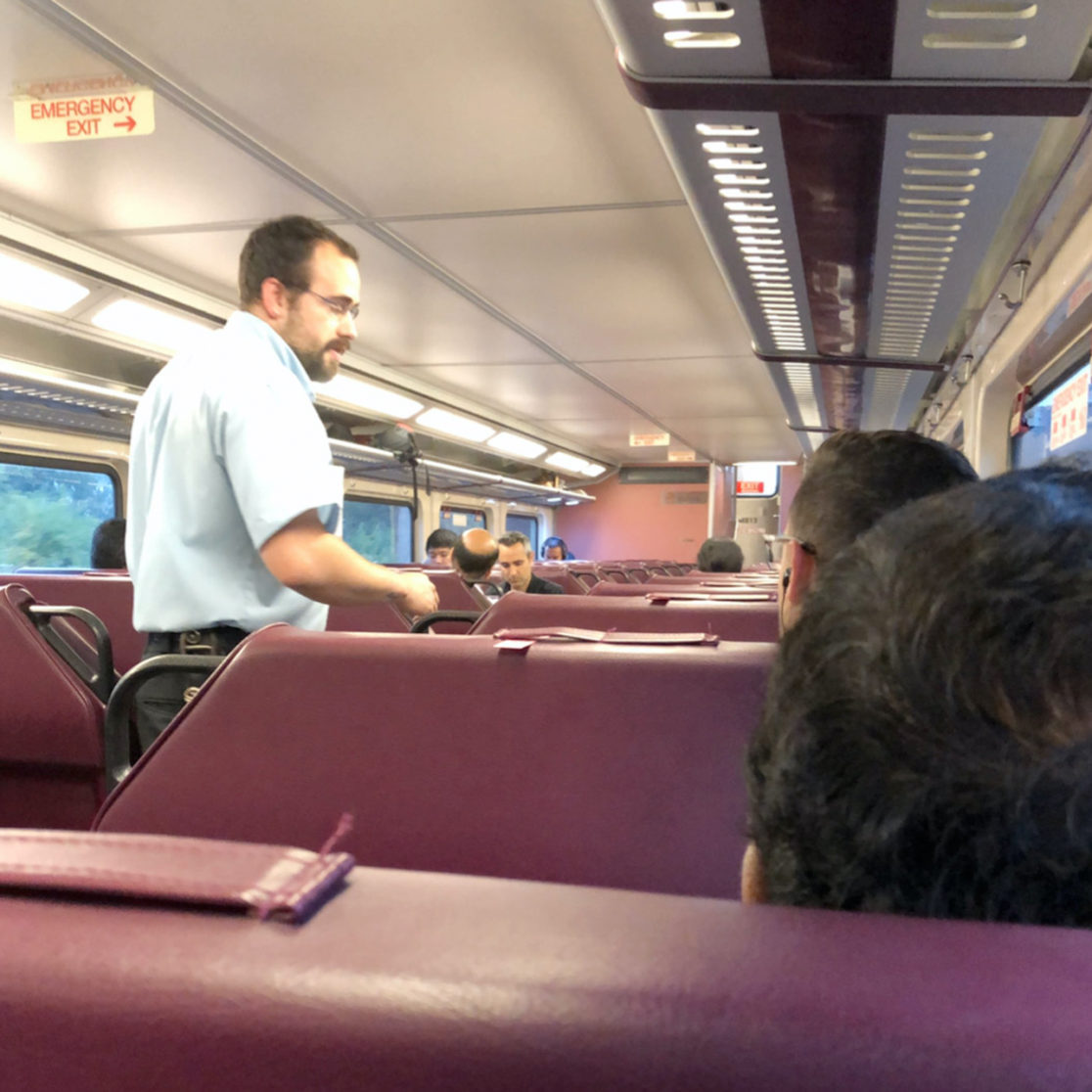 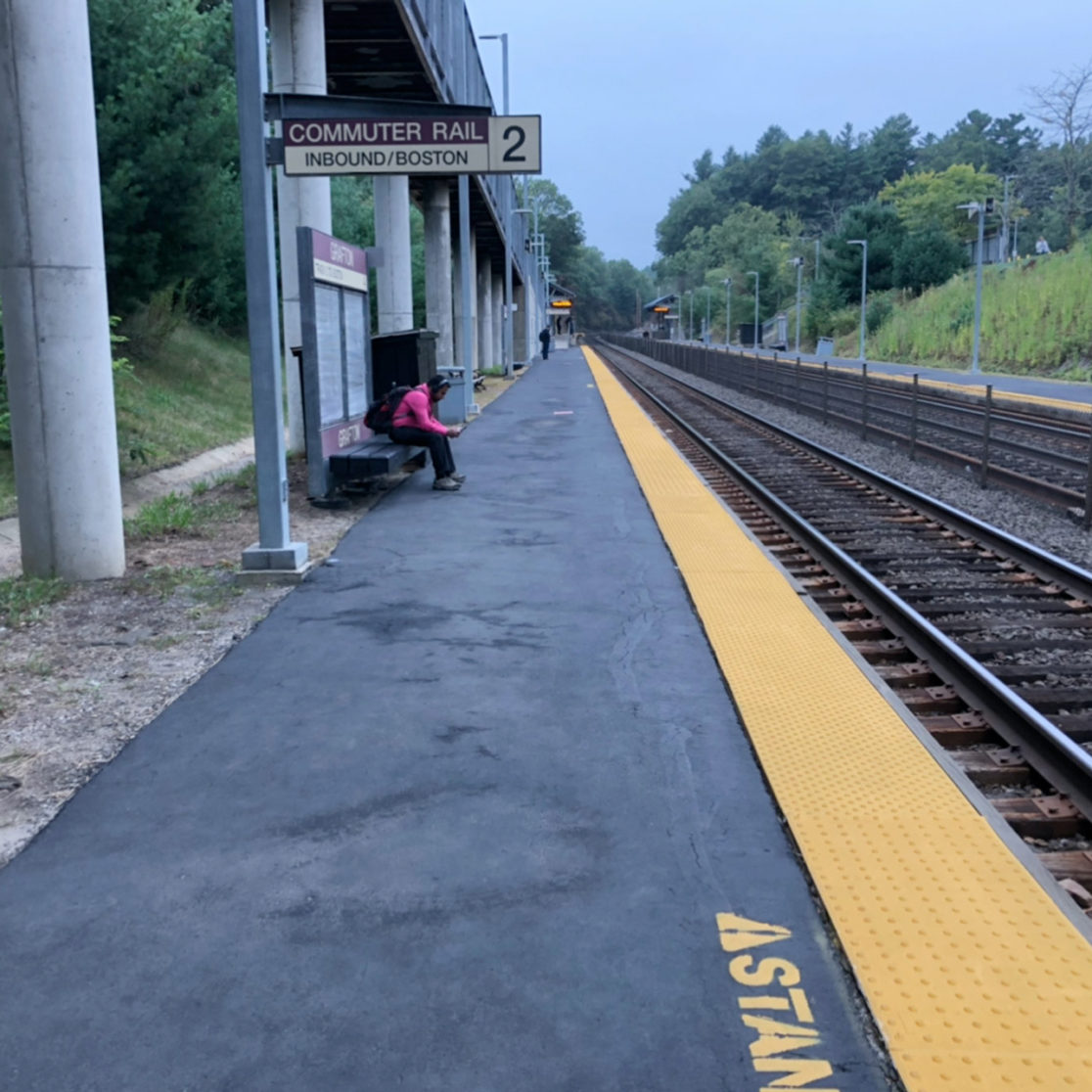 As commuting often involves multi-modal transportation we decided to interview a number of people from different backgrounds who commute into the city to get a more holistic sense of the experience. We spent over a week interviewing and recording responses. Houjiang organized the answers into categories with pain points which we discussed. He then worked to create personas which Stef and I reviewed and revised.

I took the work from the spreadsheet and built out user journey maps based on the data gathered. We wanted to illustrate how the commute felt for the people we had interviewed and to highlight their difficulties and how that might impact their overall health. I used stock photography mixed in with some of the images I had taken to tell the story. I gave all the images the same treatment in Photoshop both to give them a cohesion they would not have otherwise had, and to hide the details of peoples’ faces. As with everything else, these were reviewed and edited in accordance with the team’s observations.

Images One of the three user journey maps we created, An overview of all the influences I observed using commuter rail 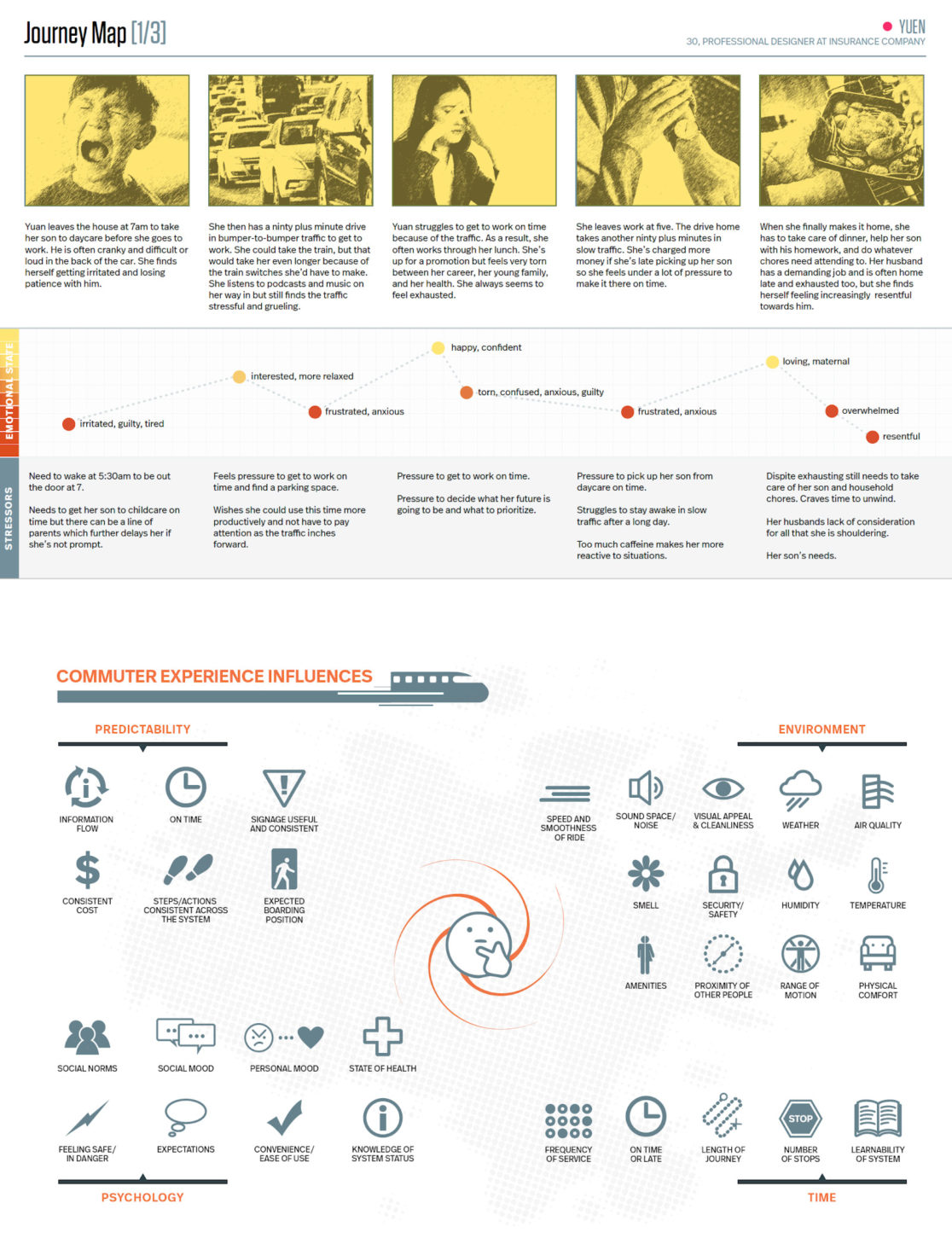 The brief required short, medium, and long-term solutions. This was somewhat challenging. In some ways I think we’d have loved to spend all our energy thinking up new visions of the future. The requirement grounded the project and forced us to think about what was possible with the technology and systems that exist today. Given the number of pain points, it didn’t take a whole lot to think of small changes that would make a big difference. Prepaid parking, for example, would take the stress out of wondering whether there would be any parking places left when driving to the commuter station.

As time was running short towards the end, we each tackled different elements of the solution. Stef worked on the proposal which we had been filling out in fits and starts, and the stakeholder maps. Houjiang created a temporal overview of the different states of our suggested systems updates, and I focused on creating a video to demonstrate our future user’s experience of a smooth commute. 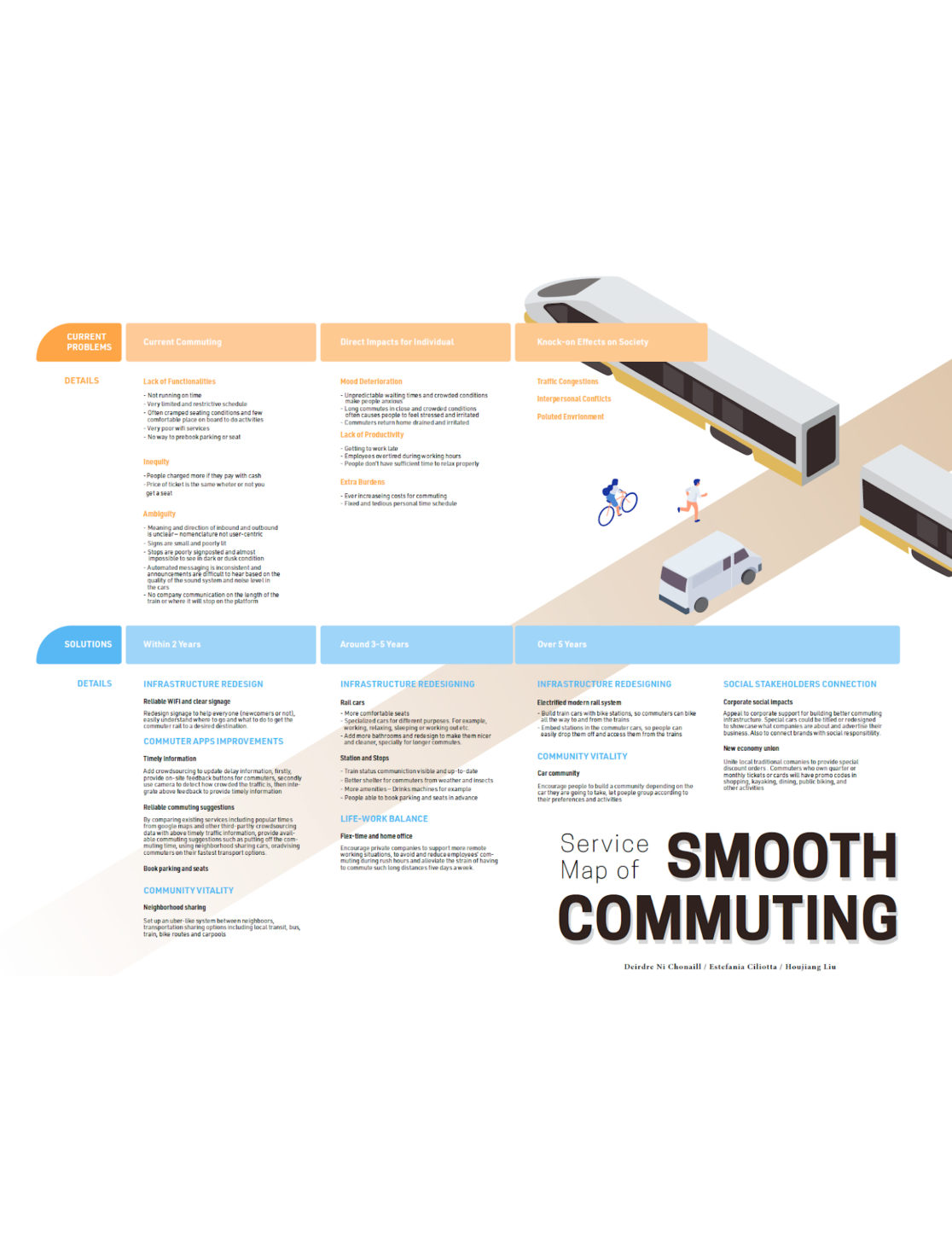 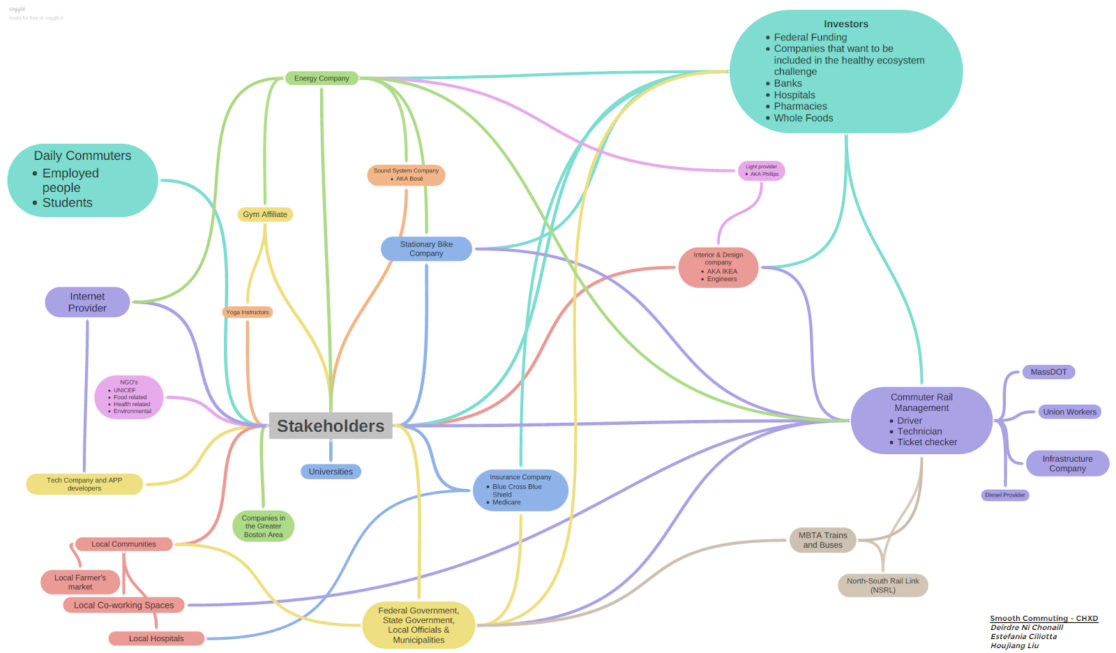 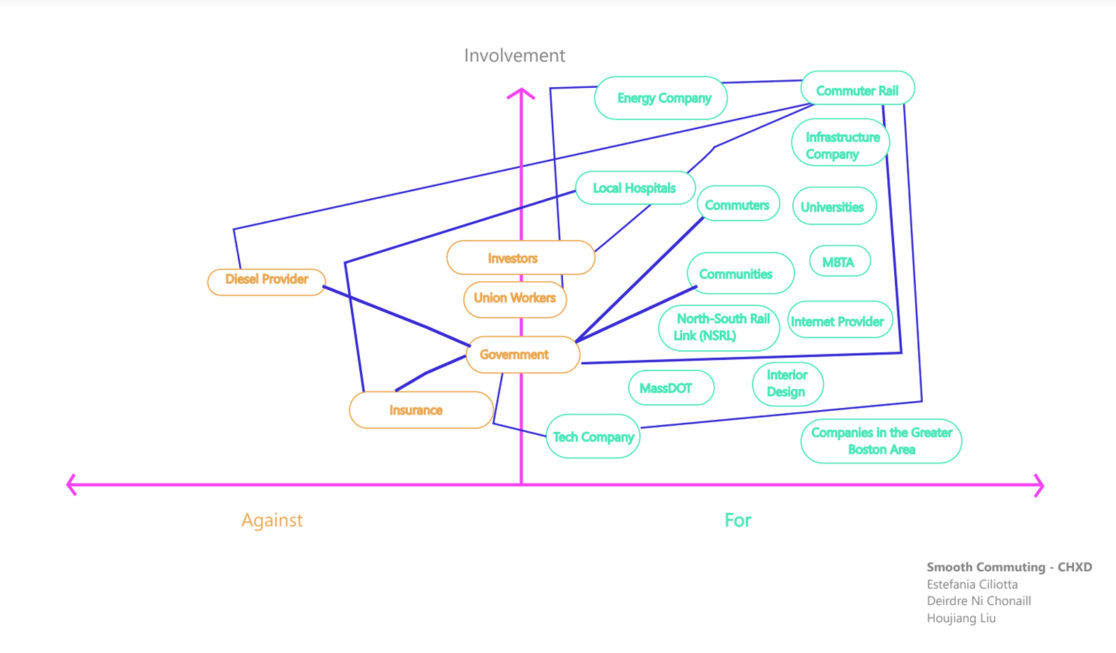 Overall, I think our skills and knowledge complement each other and we worked very well together. It wasn’t all perfume and roses and we didn’t always agree but we all compromised on different things. Stef was doing an internship in DC so we had to work remotely, and we were all juggling other projects, jobs, and holiday schedules. Remote is not my favorite way of working, but we managed to meet once or twice a week every week to discuss progress and decide what to do next. None of us were afraid to voice our concerns or play devil’s advocate and as a result we had some fairly healthy debates.

Our lowest point was about a week before we submitted our project. Doubts were had as to why we were adding all this extra work on top of our already loaded schedules. It was at such moments that Stef’s optimism and encouragement shone. We all had our doubts at different moments but we balanced each other out. It was like riding a bike for the first time with no stabilizers. Happily, we flew.

On Wednesday, 16th of October, I heard a knock outside my office door. I was greeted by the delighted faces of Stef and Houjiang telling me that we’d won the systems category. What a lovely surprise.

We will be presenting our project at the Mad*Pow HXD Conference in April 2020. Our thanks to everyone who made this possible for us. Our classes, our professors, CAMD, and Northeastern.