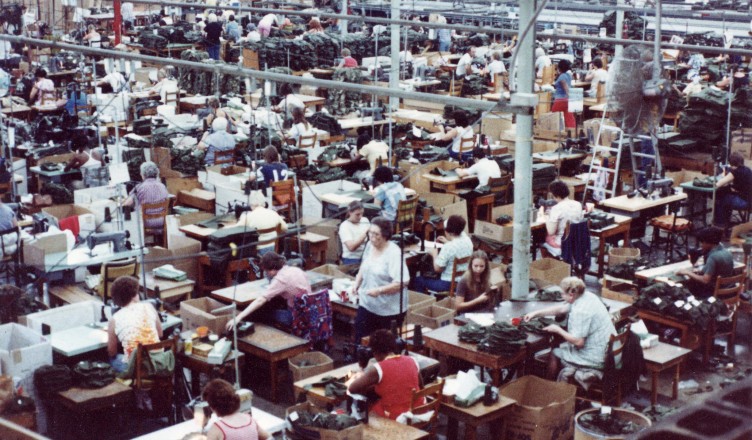 A dark facet of the global economy which makes many Western shoppers queasy is the process behind how products are made. While rich nations enjoy cheap manufactured goods like clothing and technology, the supply chain of  their production reveals a very shocking and repulsive process. Child labor, hazardous working conditions, long hours and human rights abuse are all involved in the creation of many everyday products we buy like our T-shirts and laptops. Sweatshops, or factories in violation of two or more labor violations, have sparked outrage from human rights groups, media outlets and the average sympathetic consumer who has peered into the ugly side of globalization. Comedian John Oliver had done a popular piece on sweatshops, shedding light on their wrongdoings as well as criticizing the companies who purchase from them. And since the 1990s, the anti-sweatshop movement has gained a strong grounding in its opposition to what it views as exploitation of impoverished workers. The backlash has involved calls for boycotts of companies that purchase goods from these sweatshops and protests aimed at public awareness. Intellectual Noam Chomsky described the student anti-sweatshop movement as “In some ways, is like the anti-apartheid movement, except that in this case, it’s striking at the core of the relations of exploitation”. 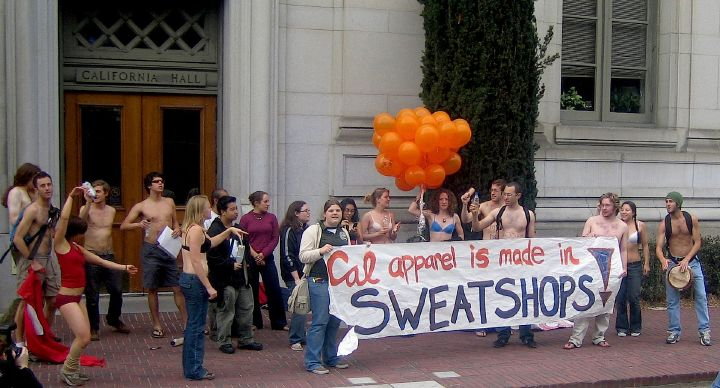 Who can live with a decent conscience knowing that their wardrobe is the product of cruel child labor made in hazardous factories? Well, not only should you sleep well, but you should also be patting yourself on the back, as buying products made in these sweatshops plays a fundamental role in the development of impoverished nations. Many look at sweatshops and see only the lack of labor rights, safe working conditions, and decent wages. As horrible as these factors are, they rarely look at their alternative, which is often unemployment or subsistence farming. While on the surface, sweatshops may seem monstrous and inhumane, they actually are the lesser of two evils. Even though the workers of these factories, many of whom are children, work long hours for little pay, they typically earn more in these industrial jobs, which allows many to escape from extreme poverty.

A recent study published by the National Bureau of Economic Research analyzed the effects of Ethiopian industrial labor (working in sweatshops) on the lives and income of Ethiopians. It compared the livelihood of workers who were offered factory jobs and workers who were offered nothing. Researchers Chris Blattman and Stefan Dercon found that the income of workers who were employed in factory jobs was slightly higher than the income of the workers who were offered nothing, or employed in the informal sector. But while the difference was relatively minor, the industrial sector provided something that the informal sector couldn’t: Stability. While wages and employment in the informal sector are often unstable and volatile, a factory job provides temporary stability and steady wages for workers in between jobs. In the study, 77% of Ethiopian workers had quit their factory within a year, so while these jobs are dangerous, they are typically short term. In a country that does not provide a social safety net, like unemployment insurance, even temporary unemployment can have devastating effects. This makes the short-term and stable industrial jobs so vital for the wellbeing of many citizens in developing nations, who although face a higher risk of disease and injury, rely on these jobs for the social safety net that countries like Ethiopia cannot yet afford to provide.

There are few issues where Keynesian economists, like Jeffrey Sachs and Paul Krugman, and libertarian think tanks like the American Enterprise Institute can see eye to eye on. But in the case of sweatshops, they both recognize their role in improving the lives of people living in the developing world. Sachs, who himself has worked as an advisor to many developing nations and has also played a critical role in advancing the United Nation’s Millennium Development Goals, stated in a Harvard panel discussion: “My concern is not that there are too many sweatshops but that there are too few”. While seemingly counterintuitive, many economists agree that these sweatshops play an important role in development.

Nobel Prize-winning economist Sir Arthur Lewis, who is known for his work in development economics, pioneered a theory known as the “Lewis Model” or “Dual Sector Model”. The theory attempts to explain the process of growth within emerging markets. According to Lewis, there are two economies of developing nations, the traditional sector, based on rural agriculture and the modern sector, based on urban manufacturing. The former involves low productivity, as a large surplus of workers produce very little and farm for basic subsistence. The latter, on the other hand, incorporates a higher level of productivity using technology, allowing workers to put their labor to greater use. Lewis stated that because workers in the agricultural sector are so unproductive, labor could move to the modern economy, where it could play a much more productive role and agricultural production would be left unaffected. This would lead to the improved welfare and productivity of the nation. Labor would continue to move from agriculture to manufacturing until it is distributed among both sectors to the point that productivity per each unit of labor is maximized, or until they have the same marginal product of labor, as economists say. As a result, wages would increase and poverty would decrease. The benefit of sweatshops is that they move low-skill workers out of the countryside and into the cities, allowing the country as a whole to grow. 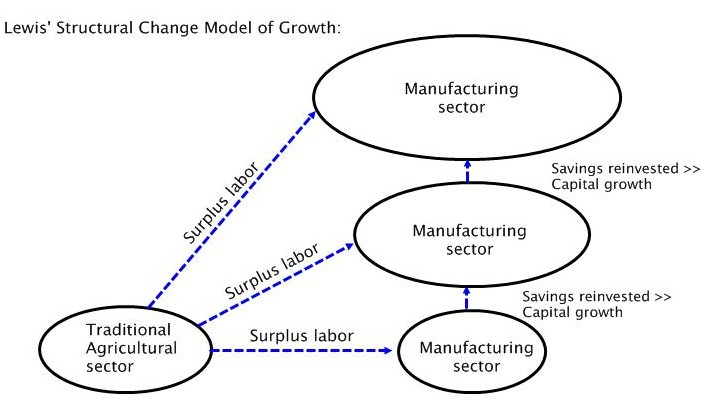 Lewis’s theory can be best shown in China, where urbanization has led to rapid industrial growth and development. Between 1981 and 2010 160 million Chinese citizens had migrated to the cities from the countryside, the largest internal migration in human history. While the work along China’s coastal cities involves harsh, underpaid menial labor, it is still far more productive than agricultural work, allowing workers to earn more than they would have by farming in their home provinces. And the gains have shown. Since 1981, China’s rate of extreme poverty went from 84% in 1981 to 12% in 2010. India, to a lesser extent, has experienced a similar decline since the 1990s as a result of policies focused on industrialization.

Although there appears to be a tradeoff between moral labor standards and economic development, we should all ask: Why can’t we have both? It certainly isn’t too much to ask for implementing basic and cheap safety equipment, like fire extensors or at least stronger enforcement of existing labor laws. Especially when compared with the massive profits gained from outsourcing labor to low wage, low regulation countries, there is certainly room to improve safety without harming development. So long as reforms are modest enough to keep employment in low-income countries attractive, it should not harm growth within those nations. Basic safety measures can go a long way in improving workers living standards and reducing the risk of tragedies which are all too common. In 2012, just outside of Dhaka, Bangladesh, a fire in a garment factory, claimed the lives of 111 workers and have left many more injured. The reason for this event leading to the death of so many was due to the lack of fire exits. Tragedies like these are unnecessary and certainly not the right path to take for development, especially when they could be easily prevented by implementing low-cost safety precautions. And while we cannot ignore the catastrophes, we also cannot ignore the miracles. Dhaka is a highly dense mega-city that is at the center of Bangladesh’s textile industry, attracting thousands of migrant workers from neighboring nations who come looking for employment in its thriving economy. The nation of Bangladesh itself has experienced strong development, with a GDP growth rate of 6.5% in 2015, and has been accelerating in recent years. The country’s GDP per capita has risen from $510 in 2000 to $972 in 2015 . And as shown by the graph below, poverty has been steadily decreasing. 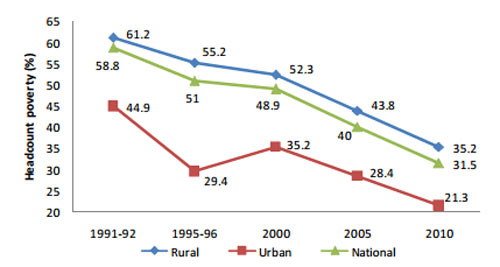 The small country of 160 million (yet about 1/70 the size of the US) has dramatically improved in recent years, due in part to the many factories it hosts, which has enhanced the lives of millions who would have otherwise suffered in extreme poverty. Again, Sir Arthur Lewis’s theory proves true. Thanks to outsourcing low skilled labor and western consumerism, development has been rapid in Bangladesh, but the road to development does not need to contain deadly factory fires. And if there is to be any modest reform, it should be made at a global level to prevent countries competing for weaker regulations, known as a “race to the bottom”.  Krugman, as mentioned earlier, stated in his New York Times blog, that if any significant labor regulation were to take place in Bangladesh, it would lose its competitive edge to other low-income nations like Cambodia and China, as its economy which relies upon cheap labor would suffer greatly. He believes that so long as factory reforms are kept modest and are shared among all nations, appropriate reform should be implemented. The Trans-Pacific Partnership goes in the right direction as it attempts to establish labor protection among the member nations. Gradually, more improvements can be made.

Also, this election cycle has focused on the negative effects of outsourcing manufacturing jobs, spreading the idea that his moving jobs to these countries hurt Americans. Many wish for the factory jobs that have left the US to nations like China and India to be brought back so they may provide jobs to struggling unemployed fellow nationals. On both sides of the political spectrum, we are hearing the danger that outsourcing poses on hard working Americans. This idea, like the anti-sweatshop movement, hurts the people it intends to help. While many workers, especially unskilled worker, have found themselves unemployed as factories and plants move to low-income countries, the rest of Americans are better off as a result, as cheaper goods allow them to have stronger purchasing power. While a system of compensation should be in place, we cannot forget the key economic principle of comparative advantage. Pioneered by 19th-century British economist David Ricardo, the theory of comparative advantage states that all countries should concentrate their efforts on industries which they have a natural advantage in and which they can produce more efficiently than competing countries. If a country can produce a good at a lower cost than another country, it should specialize in producing that good in order to keep prices low and to maximize efficiency and productivity. Because countries like China and Bangladesh have a natural surplus of low skill labor, the theory of comparative advantage states that it these nations should be producing products that require cheap low skill labor, rather than advanced nations like the US. Fighting these market forces and bringing back these undesirable jobs will not only harm global development but unnecessarily raise prices and reduce inefficiency. Not to mention the fact that most of the jobs which have been outsourced have left permanently and no amount of political pressure will bring them back. China, which has received a lot of criticism for taking once American jobs, is experiencing outsourcing as well, as manufacturing jobs move to Vietnam due to the growth of Chinese wages.

However we may feel about sweatshops, boycotts are not the answer and pressuring corporations to bring these jobs back to the US would hinder global development and raise the cost of living for Americans. The feeling of self-righteousness, although noble and well-intended, does more harm than good. If companies were to give in to the anti-sweatshop movement and replace workers with machines, or worse yet, buy garments from expensive US producers, the development that has taken place in the world’s poorest areas would go into reverse. What would be best is to adjust to the forces of the market, rather than resist them. Despite its imperfections, globalization has been making the world a better place for millions.