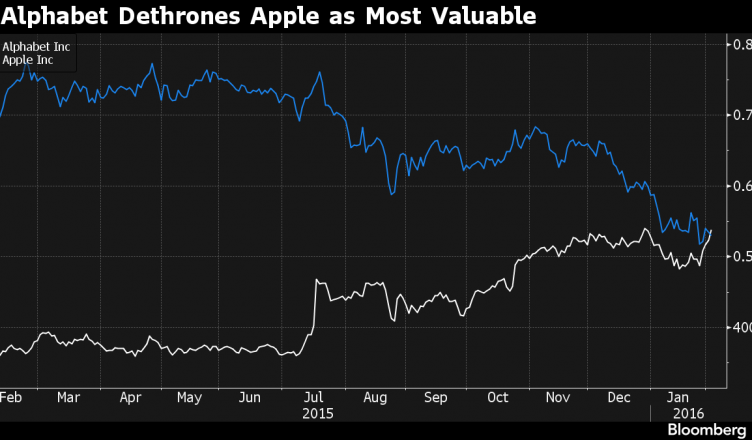 Though they have since resettled into their previous standings, Alphabet (the holding company created last year to restructure all of Google’s activity) briefly overtook Apple as the world’s largest public company by market capitalization last February 1st. Yet Apple’s revenue is almost quadruple that of Alphabet’s, while its operating income is 3 to 4 times that of Alphabet’s. What, then, warrants their similar valuations?

Apple was the first of the two to report its earnings, on January 27th. The company reported that, buoyed by healthy holiday sales of the iPhone – Apple’s most profitable product – it had reaped a record $18 billion in quarterly profit, more than any public corporation has ever done. Yet, when trading resumed the next day, the iPhone was also responsible for a plunge in Apple’s stock price of over 4%.

Because historical iPhone sales have been so strong, it is now much more difficult for Apple to ensure a continuing inflow of first-time buyers in developed markets. Its managers looked to growth markets like China as a source of increasing sales; but, because of fizzling Chinese economic growth, Apple CEO Tim Cook has now forecasted a dip in iPhone sales. With iPad sales down, Apple Watch sales barely making a dent, and no major product releases soon to come, it appears that the ballooning earnings that characterized Apple’s recent history will not materialize in its immediate future.

Since technology companies inherently grow by capturing previously-nonexistent markets, this is a major issue for Apple. The iPhone and iPad were the first of (and defined) product categories that are now ubiquitous in contemporary life. With no more such products yet on the horizon (the rumored Apple Car is not expected to be completed until around 2020), there remains little more of the forward momentum that once gave the company its spark. And, with smartphone and tablet competitors becoming more abundant, Apple not only must deal with saturated consumer markets, but with burgeoning competition.

Speaking of Apple’s competitors, Google has recently undergone a restructuring and rebranding initiative designed to give more heft to the “moonshot” projects that Apple decidedly lacks. The new Alphabet conglomerate is composed of these projects (among them Nest, Google Fiber, and Google X, the research division whose work includes self-driving cars and delivery drones) and the newly-defined Google, which will run its main advertising business. By separating these very different activities and their managers, Alphabet seeks to foster the development of the next world-changing product or service.

One consequence of this restructuring is that we now have some idea of how much Alphabet spends and/or earns from either of these categories. $3.6 billion was poured into the development-stage projects, a monumental scale compared to that achieved by startups, but an easy burden to bear for a corporation that continues to hold onto Google, a advertising behemoth that has all but beaten its most comparable competitors.

If equity pricing is at all indicative of future earnings, then investors are betting that Alphabet has more room to grow, and has made the bets that could result in a shower of revenue should they mature. Though Apple has retaken the mantle of world’s largest corporation, expect these competitors’ rivalry to intensify as they clash not only on screens, but on roads.