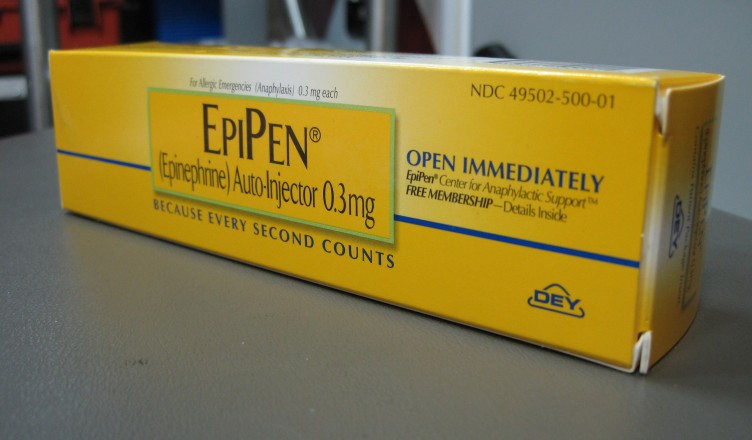 For millions of Americans with food allergies, a tiny injection of epinephrine could mean the difference between life and death. The EpiPen, which is used as a treatment against potentially lethal allergic reactions, is under the spotlight, as its recent price hikes has led to public outcry. Since 2007, when the pharmaceutical company Mylan obtained the rights to the EpiPen, the price of the tiny auto-injector went up from $93.88 to $608.61 in 2016, an increase of over 500%.

At congress, both sides of the aisle have expressed outrage against Mylan CEO Heather Bresch.  Lawmakers remain unconvinced that the price hike has been justified, as they view Mylan’s actions as putting profit over the lives of their constituents. Bresch, who has seen her annual salary increase to $19 million from around only 2.5 million (almost a 700% increase)  blames the Affordable Care Act for the price hike, even though prices have been going up before the ACA was enacted. At a congressional hearing, Jason Chaffetz (R-UT) stated to Bresch  “I’m  a person who believes in profit motivation…. (but) you have 5 executives in 5 years that earned nearly $300 millions dollars in compensation”. As a response to public outcry, Mylan has stated they will be offering a generic version at half the current cost, but may remain unsatisfied, since the concession make the price hike seem unjustified in the first place.

But if you think rising healthcare costs go farther than just the EpiPen, you’d be correct, as inflation in the US healthcare sector (Which makes up 17% of US GDP) was 4.9% in August, compared to overall US inflation of just 1.1% in the same month (4). Mylan appears to be continuing the ugly trend of using the high demand for life saving medicine to collect a bigger return on investment.

This is what economists refer to as “rent-seeking”, as defined by investopedia.com as “the use of the resources of a company, an organization or an individual to obtain economic gain from others without reciprocating any benefits to society through wealth creation”. Basically, taking a bigger piece of the pie without adding any value to the pie. This activity is overall harmful to an economy, as it transfers wealth from society, which could have used the wealth productively, to a firm which operates unproductively.

But even if you’re food allergy free, you still have reason for concern, as the EpiPen price hike has placed severe cost on our federal government, transferring money from the taxpayer to Mylan. According to an analysis from the Kaiser Family Foundation, a health policy research group, EpiPen costs for Medicare Part D, the federal health care program for the elderly, increased by 1,151%, from $7 million in 2007 to $87.9 million in 2014.
Let us hope that this will led lawmakers to take a more active role against price gouging before healthcare costs burden families with debt and death.