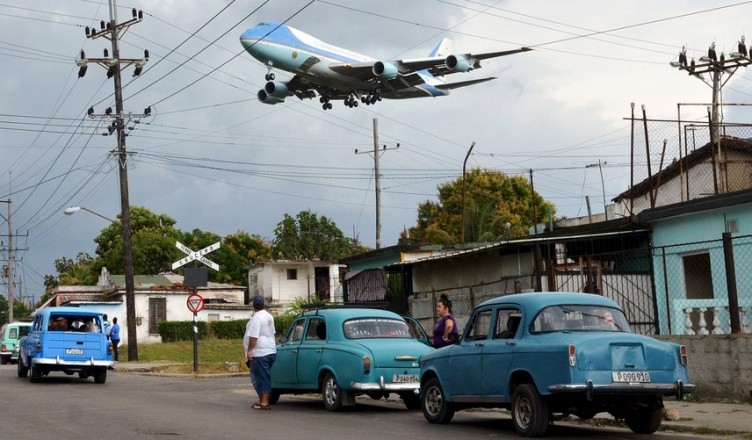 When President Obama landed in Havana last Sunday, he became the first sitting president to visit Cuba since 1928. Despite its proximity to the United States (about 100 miles from Key West, Florida), this is only the second time that the grand diplomatic gesture of a U.S. presidential visit has been extended to the island nation. During his tenure, President Obama has already made trips to China, the Czech Republic, and Russia; the presidential travel schedule itself signals how little U.S. diplomatic relations with Cuba have progressed since the Cold War.

Still, Cuban suspicion of U.S. intervention stems predates the Soviet Union, going back to the very foundation of the country. The five-year American occupation of Cuba in the wake of the Spanish-American War set the stage for the so-called Platt Amendment, a set of guidelines that were embedded in the 1902 Cuban Constitution and guaranteed the right for the U.S. to intervene militarily and an open-ended lease for a naval base in Guantanamo Bay. The U.S. Treasury addresses this tortured legacy by sending annual rent checks to the Cuban government in compensation for the land; the Cuban government refuses to accept the 2,000 gold coin (just over $4,000 in current dollars) payment.

The embargo of Cuba has long remained a thorn in U.S. diplomacy, particularly with Latin America. The policy has been roundly condemned by the U.N. General Assembly every year for over 20 years (Israel and the U.S. are usually the only voters to affirm it). Latin American countries, similarly leery of the dominant economic and political power in their hemisphere, have long presented it as an emblem of the cruelty and bullying of U.S. foreign policy. This outlook is partially what drove Cuba into the arms of Venezuela as an economic partner after the collapse of the Soviet Union. 100,000 daily barrels of Venezuelan oil propped up the Cuban economy for years; Cuban-Venezuelan trade in 2012 amounted to 20.8% of Cuba’s GDP, but only 4% of Venezuela’s GDP at the time.

The death of Hugo Chavez and the fall in the global price of oil has broken Venezuela’s ability to provide this support, so Cuba needs a new trade partner. And this economic desperation, combined with the aging of Cuba’s revolutionaries and a U.S. president searching for a defining lame-duck foreign policy achievement, may be what was necessary to finally break the inertia of a 55-year-old embargo.

The 88-year-old Fidel Castro is rumored to be in failing health; 83-year-old Raul, the current Cuban president, will leave office in 2018; his designated successor was born more than a year after the revolution which put the Castros into office. Likewise, 80% of the National Assembly was born after the revolution. With the last of the old generation passing from power, a warming towards reforms of Cuban socialism seems to be in the books. Limited small businesses and privatization of economic activities have been allowed; this is likely to continue as U.S. trade and tourism increases. While a Castro brother headlines the normalization of relations with the neighbor to the north, this occurs within the context of a younger generation of Cuban policymakers that will inherit, and manage, the floodgates.

It doesn’t hurt that the calculus of American elections is now swinging in favor of Cuba. Since 1999, a majority of Americans have supported normalization of relations, and even ending the embargo. But conservative-leaning Cuban-Americans, who historically have had little sympathy for the Castro regime (often because they fled Cuba themselves) and been concentrated in the populous swing state of Florida, have not supported normalization until recently. Federal lawmakers, anxious to gain Cuban-American votes in order to win Florida, have opposed diplomatic talks in a cynical and stereotypically Americentric ploy to protect their titles. But now, with younger Cuban-Americans shifting towards the political center and become friendlier to a change in policy, the stage has also been set for the U.S. to also move towards normalization of relations.

President Obama, faced with the end of a much shorter tenure, seems to be motivated less by economic desperation than a desire to expand his legacy after facing his last midterm elections in 2014. This period, often referred to as the “lame-duck” period, is often one that is unproductive for presidents; members of Congress of the opposing party have little incentive to collaborate with the executive branch, because doing so may involve having to forge a compromise when an ideologically friendlier president may be on the cusp of election.

Yet Obama has defied this, and managed to gain achievements by either mostly sidestepping or even co-opting Congressional Republican policy objectives: defending the constitutionality of the Affordable Care Act, passing the Trans-Pacific Partnership, negotiating a nuclear deal with Iran, and the reopening of diplomatic relations with Cuba apply to this description by varying degrees.

And there is plenty that executive action can do without requiring Congress’ approval. Ahead of the president’s trip to Havana, Marriott, Starwood Hotels, and Verizon gained permission from both governments’ bureaucracies to operate in Cuba. The U.S. Department of Transportation has taken applications from major U.S. carriers to operate commercial flights to and from the island, and a U.S. factory has received permission to operate in the country. Even Google is joining the fray, announcing a plan to bring high-speed internet to the island. The U.S. already exported about $286m in food, but these new developments represent potential flows of new goods and services that would transform an economy that still runs on 1950s era automobiles.

Much as with gun control, however, these remain instances where the executive branch flexes the federal bureaucracy to advance policy as much as it can without legislation. Normalization of diplomatic relations can be done with Republican support; lifting the embargo proper cannot. And it may not be lifted until after the 2016 election, provided that a Democratic candidate is elected.

American economic self-interest is reason enough to lift the embargo; the market for U.S. agricultural exports alone might increase to $1.2 billion. Doing so would also buy goodwill for U.S. foreign policy in a western hemisphere that has reason to be suspicious of it. As a weapon of the cold war, the embargo is a decades-long failed experiment; as with the rest of the developing world, stronger trade will raise living standards, and strengthen U.S. soft power over the island. Will Congress see the light?