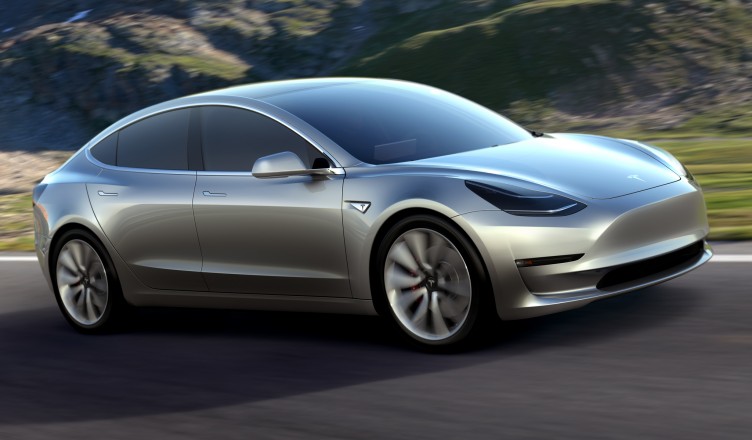 On March 31st the electric car company Tesla motors unveiled its most important car, the Tesla Model 3. With a high range of 215 miles, a low price of $35,000 (before incentives), and self driving capabilities this compact sedan will be a game changer for the electric car industry. It will hopefully be available for sale by the end of 2017.

Currently the only long range electric car is the Model S but with a starting price of $70,000 most drivers can not afford it. Cutting the price in half will attract hundreds of thousands if not millions of customers to the electric car market.

The Model 3 is the third part of Tesla’s three generation plan to introduce electric cars to the world. It started in 2008 with the release of the high price, low volume sports car, the Tesla Roadster. The purpose of the Roadster was to convince the public that electric cars could be very attractive, fast, and long range. Then in June 2012 Tesla released part two of its plan, the Model S. This high speed luxury sedan was medium volume and medium-high price and proved that electric cars could be extremely consumer friendly and highly desirable.

Now Tesla has finally reached part three of its plan, the low price high volume consumer level electric car. It will be the car for the masses that will truly change the world. The release of it was highly anticipated because analysts had no idea how Tesla was going to build a low price, high range yet still attractive car but after the reveal fans are thoroughly convinced Tesla hit the mark.

It is subjective, but most people would agree the Model 3 is a slick looking car. The curves and contours are very reminiscent of its bigger more expensive brother the Model S. Once it is fully released customers will be able to customize it with their favorite colors, wheels, and interiors.

The Model 3 is best described as a smaller redesigned version of the Model S. There are very big design changes such as the completely new front grille and the long sunroof but overall the design is descended from the Model S, which most people are happy about. Even though it is smaller it still seats 5 adults comfortably and has the most storage in its class, utilizing both a back and front trunk.

Probably the most radical design change is the lack of a driver’s instrument panel and the completely new landscape 15 inch touch screen display. The reason Tesla did this was to give the driver a better frontal view and to also allow both the driver and the front seat passenger to interact with the display. All of the necessary gages will be displayed on the screen. A popular theory about why Tesla actually did this is because the Model 3 will most likely be fully autonomous and the landscape display will be a better way for the driver to interact with the car if it is driving on its own.

Tesla’s current plan is to have 500,000 of these cars on the road by 2020 and with 325,000 preorders, and rising, Tesla is already more than halfway there before even beginning to sell the car.

Probably the biggest problem with the Model 3 will not be any design issues with the car but with Tesla’s actual ability to meet the high demand. Elon Musk tweeted after the huge number of pre-orders that their manufacturing strategy will probably have to change. Currently Tesla’s plan is to finish its Gigafactory in Nevada which will supply the batteries for the Model 3 by 2017. There have also been rumors that the Model 3 will be manufactured in China instead of California because Tesla will need cheaper labor and very high economies of scale to cut the price of the car by so much.

If Tesla is able to meet its manufacturing goals then it is very safe to say we will all be seeing a lot more Tesla on the road very soon.