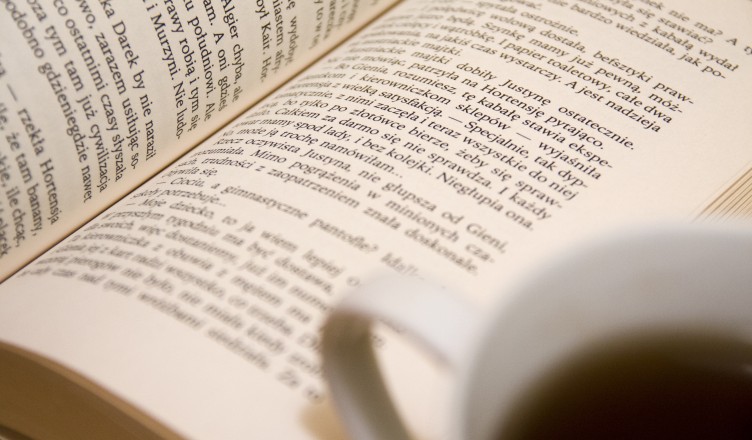 Last semester a group of Northeastern University Economics Society members taught a 10 week, after school class titled, “How much does a dollar cost?” through Citizen Schools, a nonprofit which seeks to expose middle school students to non-traditional topics through an extended learning day. During the lead up to our program we were repeatedly asked by the programs administration, “Do you really think 6th graders can understand economics?”

Economics does not lend itself to light reading or easy comprehension. Yet, this hasn’t always been the case. The term “Fed-speak” coined by Alan Blinder refers to wordy, vague, and ambiguous statements used in Federal Reserve Board announcements. An Economist infographic titled “Fedspeak” highlighted the rise in complexity of Federal Reserve statements plotting speeches based on Flesch-Kincaid reading grade level seen in the graph below (I’ve added blue dots and extended the blue line for FOMC announcements after November 11,2014 when the original article was published). This is especially shocking as the average college graduate actually reads at an 8th grade level making the generally proposed level for comprehension by the general educated public a Flesch-Kincaid score of 8-12. Alan Greenspan was known for long, complex statements, yet as can be seen in the chart, FOMC announcements have entered the undergrad and even post-grad reading levels during the terms of Bernanke and Yellen. And despite improvements in word count, the statements have no sign of returning to generally accepted reading levels anytime soon. 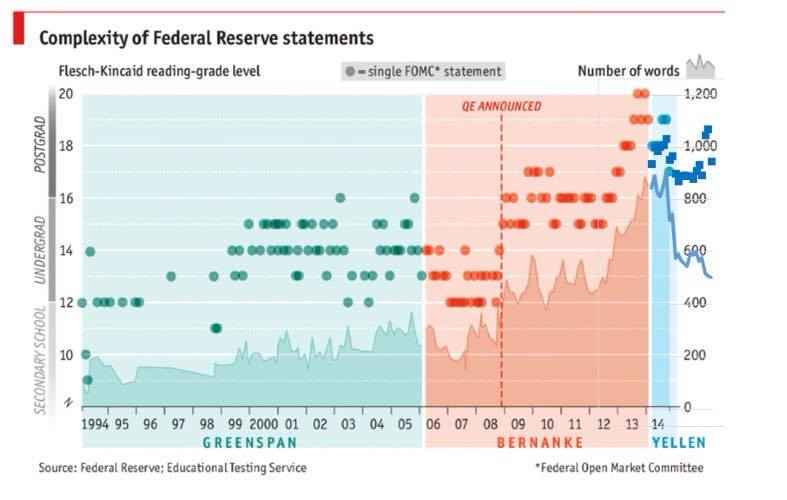 r this rise in “Fed-speak” suggests that more unconventional monetary policy leads to increasingly complex FOMC announcements. But, consider the first Fed statement released on February 4, 1994 just three paragraphs and 99 words long. The statements on policy decisions were developed to be the Fed’s key way of communicating with markets and the public. Second, but in quick succession, hard to comprehend wording has developed a market for “translators”, highly educated people who specialize in Federal Reserve policy attempting to decipher key themes and tone (ie. Tim Duy’s Fed Watch). This middleman practice muddles the waters as multiple people decipher the Fed’s next move from carefully chosen words. From this, the argument can be made that the greatest need for clarity is during times of unconventional monetary policy rather than the other way around.

The U.S. government has stressed the importance of “plain English” in public announcements since 1977 when the Federal Communication Commission released guidelines on plain writing up until the Plain Writing Act of 2010 which requires communication on government policies be clear, concise, and easily understood. As an organization that acts in the interest of the public the Fed should also aim to meet this standard in its communications. As we enter year seven of a painfully slow economic recovery it is becoming increasingly important that the public feels informed and included in updates from the Federal Reserve.

At this year’s WISER Forum in Washington D.C. I was invited to speak on a panel with Vinny Armentano on preparing Millennials for retirement. During the Q&A a financial service provider asked how to best balance the seemingly at-odds needs of millennials for both ease and simplicity in transactions while also allowing for autonomy and inclusion in the financial choices that are made. There are always situations where it is not possible, or responsible, to over-simplify information that must be conveyed. Yet, there is genius to be found in clarity. An explanation that is easily understood by a 6th grader can also contain the necessary, needed information and is useful for both parties involved. Financial inclusion has made strides in recent years to focus on the unmet needs of individuals left out of financial services. But, the second step of this process involves making the information needed clear and accessible for the individual. Joseph Kimbel outlines ways that companies have benefited from plain english in his paper, “Writing for Dollars, Writing to Please.” As an example consider a Last Week Tonight John Oliver episode which offers background of a situation and clearly outlines the problem with potential solutions in a funny, approachable way in 30 minute segments. As Albert Einstein said: “Any fool can make things bigger, “more complex, and more violent. “It takes a touch of genius, “and a lot of courage, “to move in the opposite direction.”

Our Citizen Teachers took on that challenge head first. Over ten weeks Sean Hickey, Austin Mac, David Nica, Vinny Armentano, Aleksandar Ojdrovic, Daryl Chingono and Richard Zhe Sheng Tn introduced a William Monroe Trotter elementary school class to Economics principles. The lesson plans focused on hands-on activities that showed economics concepts at work. The students never failed to impress us with their commentary and insight. Economics is an intuitive science centered on human interactions meaning the behaviors were easily understood by middle school students. They learned about diminishing marginal returns through a simulation which tracked labor input and resulting output; explored the concept of utility through trading school supplies with other students; examined the effect of a move along the supply curve through a game of musical chairs; used population pyramids to track countries demographics over time; learned about the role of the Fed from a Federal Reserve employee; and all the while collected notes in their own self-developed reference journal proving that 6th graders do in fact understand economics.

Economists sort through noise daily to identify the main cause and effect driving changes in global economic indicators. Yet, frequently the communication aspect is lost in complex formulas and jargon. There is a huge need for economists who not only understand the systems they study but also can act as translators for both markets and, arguably more importantly, everyday people. It’s definitely easier said than done. Our group of volunteers spent hours each week preparing for each lesson plan and perfecting the message and examples they would use. Often times this work lead to a better understanding of the topics for the Citizen Teachers as well. The hard work was clearly worth it at the final presentation where students presented on the topics they had learned– proving that there is a way to simplify economics concepts and, more importantly, everyone involved is better off because of it.

The curriculum will be taught again this semester. Please contact Austin Mac, David Nica, or Sean Hickey for more information.

Yes, the curriculum name is a Kendrick Lamar reference.

For more information on Plain English check out the Lynda course, “Writing in Plain English” available for free through the MyNEU site.