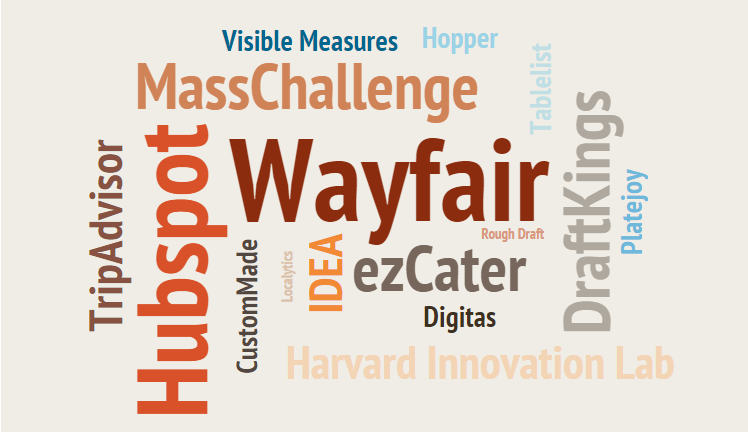 The Boston of the 50s, 60s and 70s was a powerhouse of American innovation and enterprise muscle. MIT was powering out a series of jumps forward in computer technology, and major tech companies like Digital Equipment, Wang, and Data General are all based in the Greater Boston area. But this innovative spark and muscle slowly deteriorated over time, and while Boston retained its world-class universities and hospitals, much of that talent they produced was failing to stay and make a difference. Boston’s economy became heavily financially-focused with the slide in entrepreneurial activity continuing to the early part of the present century.

A series of events in the middle of the first decade of the 21st century would rouse Boston from its slumber and reverberate across the world. In 2004, Facebook was founded at Harvard University by Mark Zuckerberg. Then in 2005 major internet platform Reddit was founded in Medford. Finally, in 2007, Dropbox was founded by Drew Houston at MIT. These companies now form integral parts of the internet and are household names. Boston had seemingly turned a page, roused from its slumber and reestablished itself as a premier center of innovation. For a while, things looked good to last. But then Boston began to suffer from the problem that has haunted the city for decades: its most promising talent and businesses were being poached by bigger fish. Facebook moved to Silicon Valley, then Reddit and finally Dropbox. Other companies that looked good to fill the space they left were acquired left, right, and center.

At this point, Boston was nothing more than a feeder city, creating entrepreneurs, highly-talented graduates and promising businesses only for all three to disappear to other parts of the country where more money, a greater appetite for risk and grandiose visions dominated. Granted, the Boston of 2005 was feeding far better businesses and talent to competitors than the Boston of 1985, but this is relative progress. However, in the last few years, the narrative in Boston has changed. We are entering a third chapter of this innovation story and the prospects look bright. 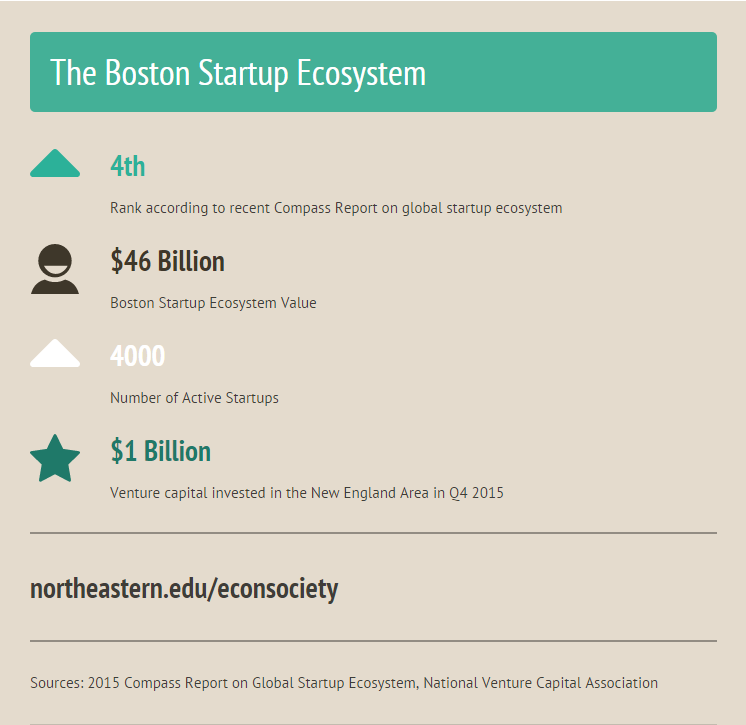 The Boston startup ecosystem has been accumulating heft for the last five years, increasing its diversity and connecting a lot of dots that were lacking. A recent Compass report on the state of startup activity ranked Boston is 4th in the world with a total ecosystem value of $46 billion and roughly 4,000 active startups. The city is clearly hungry for startup activity. Traditionally, Boston has been focused on more late-stage ventures, but this has begun to change with the introduction of the Northeastern University’s student accelerator IDEA, Harvard Innovation Lab, and Rough Draft Ventures (a mini-VC fund run my students). These accelerators among others are guiding entrepreneurs and helping them sit at the tables and talk to the people they need to be successful. The city government has also made a concerted effort to attract both startup activity and create an ecosystem for it to be successful in the seaport district. Finally Boston remains a well-funded market, with over $1 billion in VC investment in Q4 of 2015 alone and fundraising for VC funds running into the hundreds of millions of dollars.

The biggest sign that Boston has entered a new phase was the declaration on January 13th that General Electric, a behemoth of a company, would be moving its headquarters to Boston’s seaport district. The company has a collective market cap of $300 billion and deep wells of expertise in a variety of high-growth fields and will alter the Boston business landscape fundamentally. It will be by far the largest publically traded company in Boston and will infuse the city with talent, product and ideas. Indeed, the CEO of GE Jeffrey R. Immelt recently said with regard to GE’s move to Boston that “We want to be at the center of an ecosystem that shares our aspirations.”

GE will find itself surrounded by the likes of Hubspot (a billion dollar company), Wayfair (which is targeting $1 billion of revenue this year) and Visible Measures (a leading internet marketing analytics firm). It will join established names and global players such as State Street and Fidelity Investments, Mass General Hospital and the Boston Children’s Hospital.

However, as Boston’s story shows the wheels can all come off again. Boston must do three things to maintain its competitive edge and continue to consolidate its status as a major center of innovation. Firstly, it must focus on its strengths. Boston has a long history of medical prowess and is a global leader in biotech and robotics. Continuing to invest and support this as well as the university system will ensure a solid foundation for the city. Indeed, Boston biotech startup SQZ recently secured a mammoth $500 million deal with drug giant Roche and Boston Dynamics, a world leader in robotics, was recently purchased by Google. Boston must also continue to build on its strength in enterprise software. As the recent bursting of the tech bubble has shown, valuations and revenue forecasts in the B2C side of the world of startups have come down to earth on the back of disappointing earnings reports. The difficulty of monetizing B2C platforms contrasts with the greater success B2B companies tend to enjoy.

The second thing Boston must do is use GE’s arrival to refocus on areas of high-growth in the coming years, especially the internet of things (IOT). A report last year from BI Intelligence projected that the number of devices connected to the internet would triple from 10 billion at the end of 2015 to 34 billion by the end of 2020. But more importantly for Boston it estimated that $6 trillion would be spent on IOT solutions over the next five years. Boston most position itself to reap this windfall and strengthen the city’s role in the global technology ecosystem. 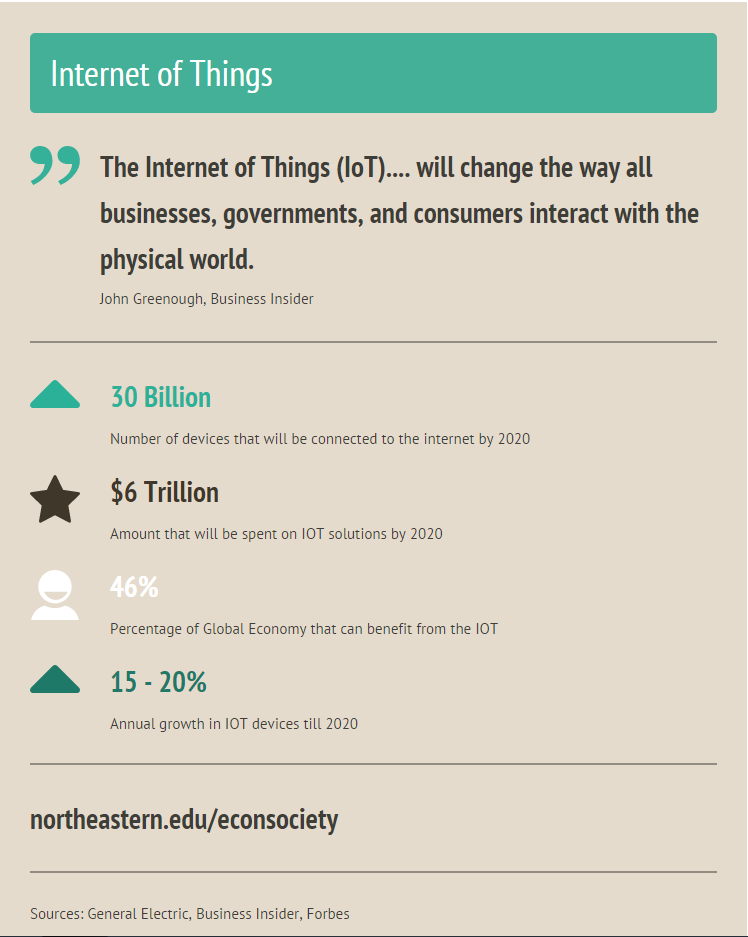 Finally, the city government must look at ways of optimizing the city for startup businesses. This can include initiatives to increase supply in the housing market – where average rent already sits above a whopping $2000 a month – as well as studying corporate tax reform. Dubai is an excellent example to emulate, with the city claiming to have attracted 21 of the world’s top 25 banks thanks to its lightly taxed “free zone” for foreign firms. Large “unicorn” startups, the likes of which can transform a city’s fortune (think Seattle and Amazon), are extraordinarily adept at avoiding tax in any form. This behavior, while questionable, is an opportunity for Boston to capitalize on. Lost tax revenue will be made up for in innumerable ways if Boston can continue to attract the likes of GE – itself set to benefit from as much as $25 million in property tax relief.

Overall, Boston entrepreneurial saga was given a second lease of life in the latter part of the previous decade and the city has made sure to capitalize on it. Boston today stands at a crossroads between choosing the a safe, relatively obscure and moderately successful path it pursued in recent decades or a path towards becoming a global leader for decades to come in technology, biotech and other high-growth fields. Some hard choices will have to be made, especially with regard to corporate tax and structural change in the city’s economy. But these choices will ultimately result in a stronger, more versatile and more prosperous future. The city government, venture capitalists, entrepreneurs and universities must make sure that Boston’s second lease of life is not a footnote in the annals of entrepreneurial history.